I didn’t expect Horizon Zero Dawn to be this good. I doubt I’ll be the only one saying they were surprised that the Killzone developer has been able to deliver a game with such breadth, depth, and consistently rewarding gameplay.

Guerilla Games has been known solely for Killzone for well over a decade. It’s a series I’ve personally loved since it debuted in 2004, even though it’s been considered by many to be overshadowed by its competitors.

For a developer to make a single series for 13 years and still deliver a title such as Horizon Zero Dawn is incredible. Not only is it comfortably the most gorgeous-looking game on PlayStation 4, but it’s also brilliant fun to play – and often verges on masterpiece levels of game design.

Let’s start with those visuals. Ahead of launch in carefully chosen gameplay footage, you’ll no doubt have seen just how stunning this game is. What’s surprising is how it remains consistently beautiful through every frame. Playing on PS4 Pro, this adventure is easily the best example of 4K and HDR I’ve yet to experience. If you’ve been looking for a reason to justify purchasing either the Pro or an expensive new TV, Zero Dawn is it.

When running around completing missions it can be easy to forget that Horizon offers beauty in every landscape. Taking the time to stop and take in the view never fails to disappoint. The lush greenery that Aloy, our flame-haired heroine, sneaks through to hunt animalistic machines, the sun-kissed desert that whips up sandstorms as she rides through the mountains or the snow-covered trees – every frame is a painting with no detail spared.

You know a developer is confident in its game’s visuals when it includes a dedicated photo mode, and I’ve spent more time taking snaps in Horizon’s world than I have on most holidays. I’ve said it already, but this is the best-looking game on PS4. Yes, even better than Uncharted 4.

It’s also incredible how smooth the performance is. In my time with Horizon I’ve experienced hardly any issues and not a single noticeable framerate drop. The only slight quibble is occasional texture pop-in as the game is a bit late to load the surrounding scenery, but other than that, I’m often wondering how on earth this thing is running on a PS4. This was the type of experience I thought I had to buy a top-end PC to experience.

When you’re done gawking at the scenery, you’ll be moving through Aloy’s engaging and compelling story. It’s well told and assisted by excellent voice acting from every cast member. Guerilla Games has set up some excellent themes that kept me invested even when there could be hours between campaign missions.

In a post-post-apocalypse, Aloy – a young huntress based in the northern regions of a vast land – seeks to discover more about her past. She’s surrounded by a people who, in the face of fear and uncertainty, have devolved and retreated into tribalism, blind faith and violence. Aloy’s hunt for not only her past, but the past of the human civilisation that came before the divided one in which she exists, is incredibly intriguing. 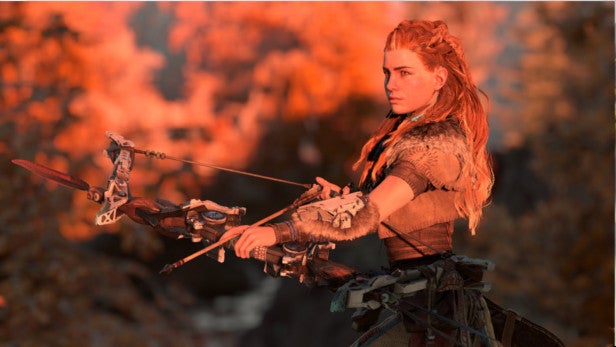 It kept me invested because this is a story unlike any other in video games. There are clear inspirations – Zero Dawn’s map structure is reminiscent of Game of Thrones, except with robots instead of White Walkers and incestuous royalty. The Nora – Aloy’s adoptive people – represent the Northern tribe, and as such are treated as savages. As the story slowly peels itself away, you’ll only become desperate to find out more. It is why my attempts to play for just 30 minutes often led to several hours of solid gameplay. The extended sessions were aided by an incredibly satisfying combat system, too.

Zero Dawn was announced at a time when it seemed every game needed a bow and arrow. Rise of the Tomb Raider and The Last of Us did it to good effect, but Aloy’s use of wood and string is the most enjoyable of the lot. Her freedom of movement on the battlefield, coupled with a vast arsenal which only grows larger, makes every encounter incredibly tactical.

Aloy must focus on stripping these vast machines of their armour, exploiting weaknesses to elemental damage or vulnerabilities in their structure to take them down. There aren’t any easy fights, either – Aloy is often the weakest dog in the fight. This is why taking on multiple enemies at once is usually futile, and in many cases it’s wiser to either avoid confrontation or stick to stealth. I’ve died plenty of times in battles, no matter how much I improved.

This doesn’t become frustrating, but what is annoying is a problem Guerilla carries over from Killzone: the lack of clear damage indication during fights. When Aloy is hit, it’s very hard to tell how close she is to death in the heat of battle. After one hit, a quick look at the health bar tells me she’s lost around 15%, so I carry on, only for her to die from seemingly innocuous attacks seconds later. It becomes incredibly annoying during the more crucial encounters, and no matter how aware you are of the problem, the act of spinning plates is too much at times. Even Call of Duty’s heavy breathing or blood spatter would be more informative.

Between fights Aloy will need to forage for resources. Horizon teeters on the brink of becoming diet Diablo with its approach to gathering everything in sight, particularly in the early hours of play, but soon you’ll become accustomed to the myriad items you must utilise. Hunting not only robots, but also the animals of the world to create health potions, new weapons, traps and more are vital in order to remain well equipped for what lies ahead, and it’s not long before you’ll be crafting plenty more and resources you believed to be plentiful quickly become empty. 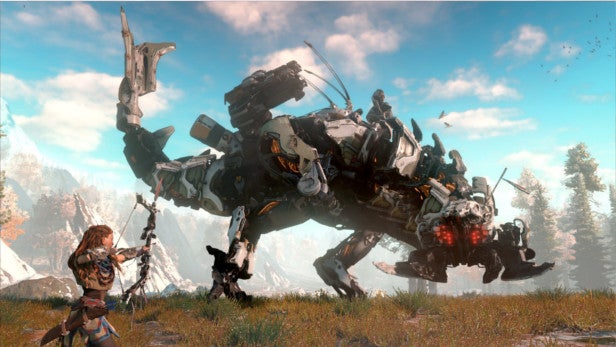 This is why running from location to location isn’t such a chore. While there may be several miles between objectives, quick-travel isn’t always the most viable option, as gathering materials is often a necessity. It also helps that there’s a huge number of side missions to do along the way.

Guerilla has put as much thought into its side quests as the main missions, meaning I want to collect each of them and keep them in my to-do list, ticking off as many as possible before moving on to the next main campaign mission. Each has its own self-contained narrative, much like a tale in The Witcher 3, and speaking to inhabitants of the world once again is great because of the great visual design and voice acting.

In terms of what Aloy must actually do, the game doesn’t offer much variety: go here, use Aloy’s Focus to discover a track, follow it, fight the enemy. That’s more often than not the pattern of most side missions, but that’s fine as the gameplay loop is satisfying and again the stories keep me invested.

The problems arise more in the menus and UI. The waypoint system means it can often be tricky to actually get to the objective, as the marker is often all over the place. The marker that’s placed in the centre of the screen tends to follow the main pathways, whereas the marker that’s placed on the compass atop the screen is as the crow flies, meaning they’ll contradict each other, especially when Aloy ventures off the beaten track. There have been many times I’ve resorted to opening the main map and using that to guide me instead, as the in-game guide is useless and sometimes sends me on the longest route possible. 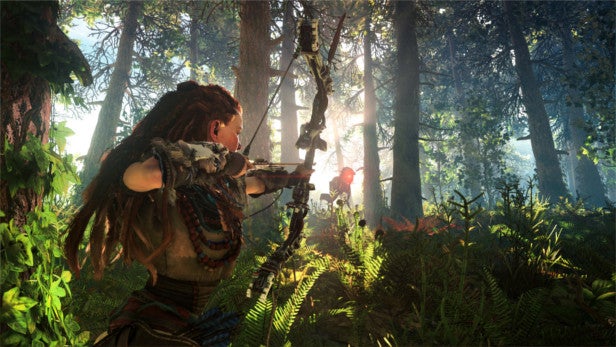 Another issue is the selection of active quests. Aloy can only select one quest at a time, but this also includes tutorials which can often be completed during a main or side mission. For example, after obtaining a new weapon, its tutorial might instruct you to “kill five machines” with it. This tutorial, and its rewards will only be earned while the quest is active, but doing so will deactivate all other quests. It’s a minor issue, but it is annoying that I can’t simultaneously complete overlapping missions.

I didn’t expect Horizon Zero Dawn to be this good. I doubt I’ll be the only one saying they were surprised that the Killzone developer has been able to deliver a game with such breadth, depth, and consistently rewarding gameplay.

Couple all of that with a compelling story led by an engaging lead protagonist and you have a brilliant game, an absolute must-buy for all PS4 owners.

Those with a PS4 Pro and an HDR TV will find an even more beautiful experience on offer, but everybody who plays Horizon: Zero Dawn is in for an absolute treat.