Introduction
The Pure Sensia 200D Connect is Pure’s latest, and cleverest connected radio. It looks just like the first Sensia, with a large colour screen and a stylish-looking rounded design, but is much more powerful than its sluggish predecessor and boasts a boxful of new features.

The Pure Sensia 200D Connect looks like a slightly squished rugby call, oval-shaped and with a large glossy panel for the 5.7-inch touchscreen display. Like the B&W Zeppelin Air, this wireless audio device successfully teeters along the borders between being eye-catching and being gaudy. 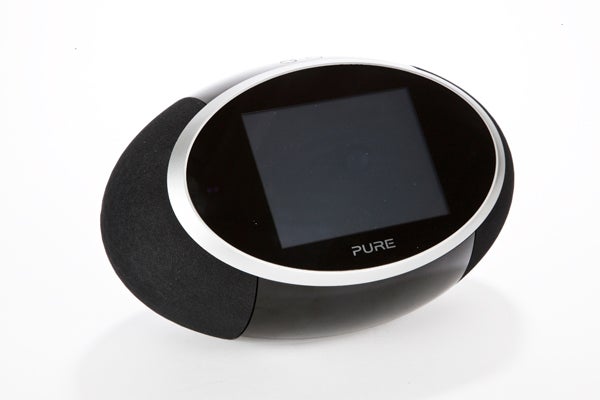 It’s a look a lot less classic or timeless than the Pure Evoke or Roberts Revival, but then the Pure Sensia 200D Connect is intended to be a much more up-to-date proposition. There’s not much retro to this radio.

The cute oval design and the petite 280mm width will help it to fit into quite a wide variety of scenarios too. Kitchen top cooking buddy? Sure, why not. A smaller lounge hi-fi? Absolutely. It’ll also work well as a bedside alarm clock.

At £249.99, the Pure Sensia 200D Connect is on the pricier side of what most are willing to pay for this sort of device, and the extra money has primarily been put into features rather than expensive-feeling build materials. Its body is finished in plastic, without the wood or metal trim you may find on some other audio docks at the price. However, it does feel thoroughly well-made and its 2kg weight gives it a little heft while still making it easy to lug about the place.

Most stylish £200-odd audio boxes of the past few years have relied on an iPhone or iPod owning audience to make their crust, but the Pure Sensia 200D Connect is a little different. 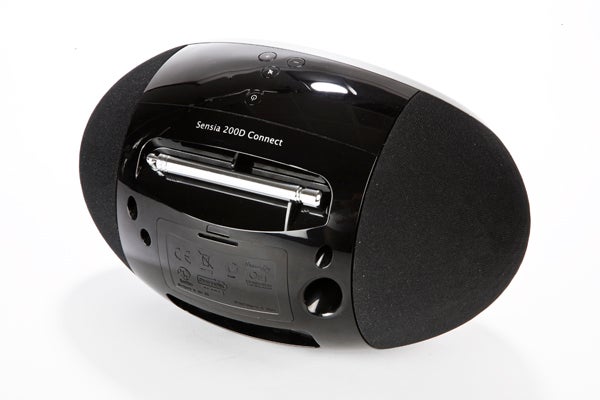 There’s no dedicated iOS dock here, and if you want to connect an iPod you’ll have to hook it up using the standard 3.5mm aux jack on the back. Leaving out the 30-pin iOS dock that was the norm at the Sensia’s launch (having been usurped by the iPhone 5’s Lightning connector) is part of what lets the musical rugby ball stay so neat-looking.

What the Pure Sensia 200D Connect is really about is wireless audio transmission, whether it’s DAB/FM radio through the 60cm telescopic aerial or other content sucked down from the air using the inbuilt Wi-Fi. Over the last few years, Pure has been developing its own infrastructure to make the most of Wi-Fi connectivity too. A little like the Logitech Squeezebox platform, Pure Lounge brings together a number of different hubs with enough content to keep your ears busy for several lifetimes. 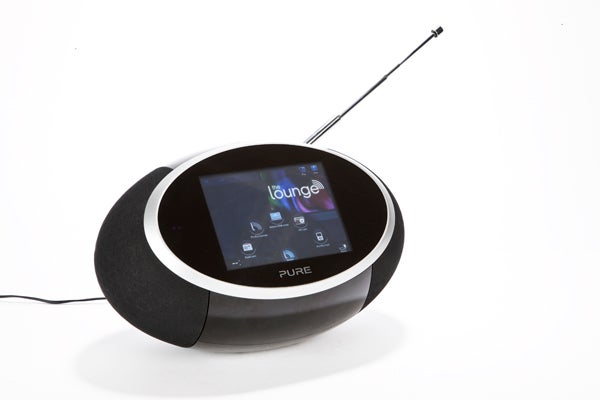 There are thousands of internet radio stations and podcasts, but these are common to just about any internet radio box. What you won’t get in other brands’ radios are Pure Sounds, Pure Stream and Pure Music.

Pure Sounds is the only one we can imagine many people turning their noses up at. It’s a long-standing repository of sound loops, from the relaxing to the slightly ridiculous. From bird calls to the engine notes of old bangers.

Pure Stream and Music are the newest additions to the Pure roster. Stream is Pure’s own AirPlay alternative, letting you transmit music from a smartphone over Wi-Fi using the Pure app. The benefit of Pure Stream over AirPlay is that it is designed to be used with Android devices as well as iPhones. Yes, there are ways to use AirPlay on an Android, but not through the official channels.

Pure Music is yet another take on an established idea. This time it’s the streaming service – making it a competitor to the best streaming services available now including Spotify, Napster and Rdio.

The downsides of Pure Music include that its catalogue isn’t quite up there with the best (although there are still millions of tracks), quality is set at a fairly low 128kbps. This is all made up for by the price, though. At £4.99 a month, including mobile use, it’s half the price of its competitors.

That Pure Music is such a central part of the Pure Sensia 200D Connect tells us that Spotify and its ilk won’t come to the radio any time soon. If you want those services, you’ll have to go for something like the Logitech Squeezebox Touch instead, which has no internal speakers. This wireless music player involves buying into the Pure way to some extent, and that won’t sit too well with everyone.

Not every feature of the Pure Sensia 200D Connect is quite so prescriptive, though. The 3.5m auxiliary jack on the back will take an input from anything with a headphone jack, and there’s a plastic cover on the rear that hides a slot for the Pure E1 ChargePAK battery pack. This costs just under £30 online and supplies “up to 24 hours” of DAB listening, although we expect the screen of the Sensia will eat into that figure a bit. 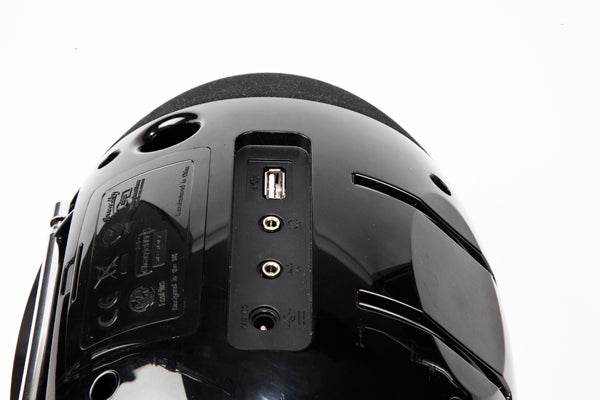 There are two other useful connections on the Pure Sensia 200D Connect – a headphone jack and a USB port. The USB lets you plug in a USB drive to record radio onto, and to update the firmware. Three radio recordings can be scheduled at once too, making it fairly useful – although the proliferation of “listen again” podcasts rains on its parade a bit. You can also hook up to uPnP media servers too, letting you fairly easily access the media libraries of computers on the same Wi-Fi network.

There are just four buttons on the Pure Sensia 200D Connect, and these only control power and volume. Everything else is handled with the touchscreen or the supplied remote control – and the touchscreen takes centre stage out of these two.

The display is of the same spec as the original Pure Sensia. It’s 5.7-inches across, has a 640 x 360 pixel resolution and uses an unremarkable TN-type panel. This kind of screen’s image tends to all-but disappear if you look at it from the wrong angle – an effect known as contrast shift. It is visible here, but the design all-but negates it as an issue. 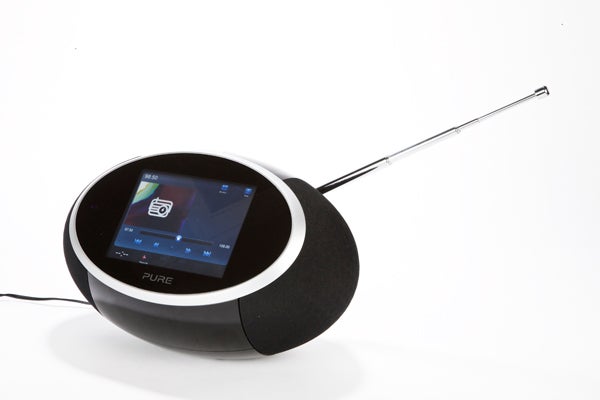 You have to be looking at the screen from underneath the Sensia 200D Connect for contrast shift to kick in. And unless you really do have the strangest house in the street, you’re simply not going to be doing that. The design of the radio angles the screen up, all-but enforcing that it’s placed below your eyeline.

The Pure Sensia 200D Connect interface is a creation of Pure’s own devising. Thanks to a much faster processor, it works a lot quicker than it did in the first Sensia, but it is not the prettiest or slickest around.

It’s based around a persistent icon-based nav bar at the bottom that also displays the time, and a set of blue panels up top, which re-arrange depending on what’s onscreen. Few of the transitions are animated and some of the graphical design within it feels a little idiosyncratic. It’s not quite visually consistent enough, and is a little dated. 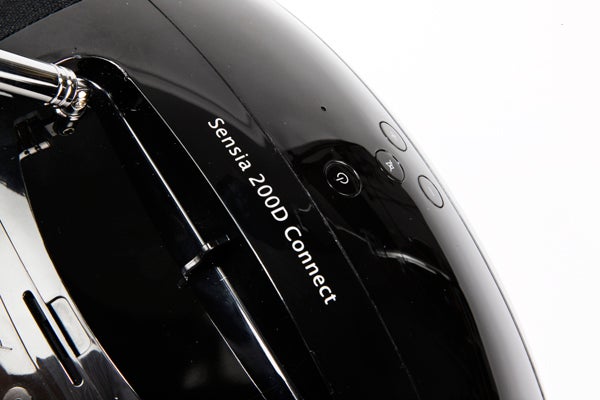 There is a slight learning curve to navigating it too, as some secondary nav buttons pop up at the top of the screen at times, confusing the process a bit. In the Pure Sensia 200D Connect’s favour, the capacitive touchscreen is quite responsive.

The Pure Sensia 200D Connect uses a pair of 3-inch drivers that fire outwards from each side. They fire directly outwards too, clearly aiming at a wide, room-filling sound rather than one that’s meant to create a proper stereo image for a particularly-positioned listener. These drivers are powered by a 30W class-D amp, a decent amount of power for a unit without a large subwoofer driver.

Sound quality is good, although is predictably bettered by other docks and speaker systems at the price that don’t pack-in things like Wi-Fi, a large screen, and a stylish bod. It’s fairly well-balanced, with a signature that’s skewed towards the warm end of the scale without resulting in a muddy or boomy finish. It’ll fill smaller rooms, but it’s not quite the hi-fi replacer some of you may be looking for. 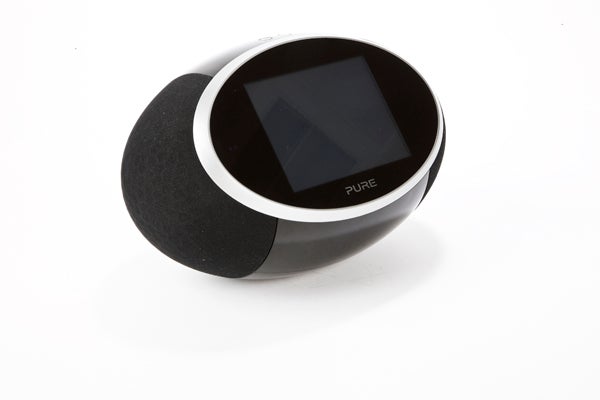 It’s a decent performance for a device of its size, but when the superior-sounding Monitor Audio i-deck 200 is available at the same price, you need to think clearly about whether you value the additional features on offer here over sound quality.

An important but ultimately minor update to the original Sensia, the Pure Sensia 200D Connect makes a stylish accompaniment to just about any bedroom, lounge or kitchen. However, while the thing runs quick enough now thanks to an upgraded processor, the interface doesn’t feel slick enough to relay all the content it has access to with anywhere near as much style as its exterior.