Pure has established a well-deserved reputation as one of the leading DAB radio brands around. With the much-praised Evoke Flow, however, it showed it knew how to make a great Internet Radio as well and the Sensia is another sign of the company’s growing ambition. Equipped with a colour touchscreen, Wi-Fi and applications for Twitter and Facebook, the Sensia looks to merge the delights of radio – be it Internet, DAB or FM – with the social media services so prevalent in our age.


It marries this ambition to a design that’s equally adventurous. There’s more than a whiff of B&W’s landmark Zeppelin in the rugby ball-shaped Sensia, an impression that extends more markedly to the saucer-shaped remote, but there’s nothing wrong with a little imitation provided it’s executed well, and it is. Pure even adds a little variety in offering a choice of colours, with black, red and yellow versions available in addition to the white one we have. Whichever colour you opt for the Sensia should fit nicely in any modern home, though those with a more traditional outlook might find it a tad challenging. 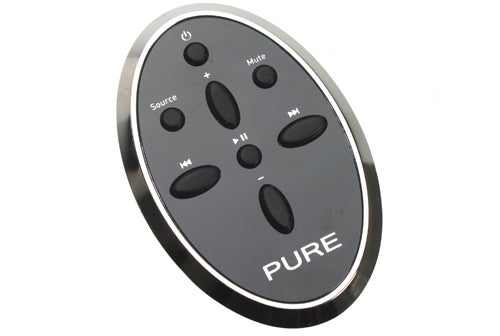 This unusual design even works ergonomically, too. The Sensia sits on a stand – seemingly inspired by a rugby equivalent – that holds it securely while allowing it to be tilted forward and back. That’s in addition to the natural tilt of the front facing touchscreen, which at 5.7in (640 x 480 pixels) is large enough (and bright enough) to be seen from across a room.


The remote is a simple, but very useable affair. Volume and playback controls are arranged logically, in addition to a mute button, one for source selection and another for power. It sits very snugly in the hand, too, though there’s no way to stow it on the unit itself for safe keeping. We wouldn’t call this an oversight per se, but it’s always a useful consideration. 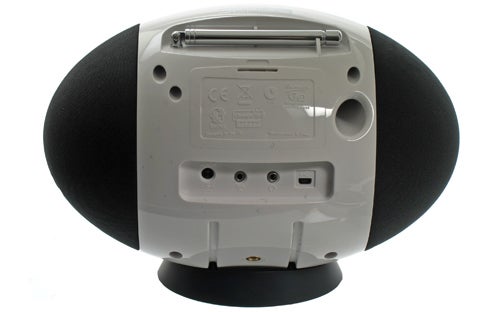 Moving our attentions rearward, at the back of the Sensia we find a smattering of connections: one for power, a 3.5mm auxiliary input, a headphone jack and a mini-USB that’s used for software updates, though they’re also accessible over Wi-Fi. Above these is a compartment that can house another separately sold accessory, the ChargePAK. As the name suggests this is a battery for the Sensia, enabling you to take your Sensia out with you – a carry case is provided in the box, too. We didn’t have one to test, but Pure reckons one ChargePak is good for up to ten hours, which is good enough.

At first starting up the Sensia is a little awkward due to the fact that the power button, which does look like a button, isn’t one. Instead it’s a touch sensitive strip, requiring you to hold your finger on it to activate it. It also doubles as the snooze button, where you simply cover it with your palm to delay the inevitable. If at first this seems odd, once you understand how it works it’s intuitive enough. 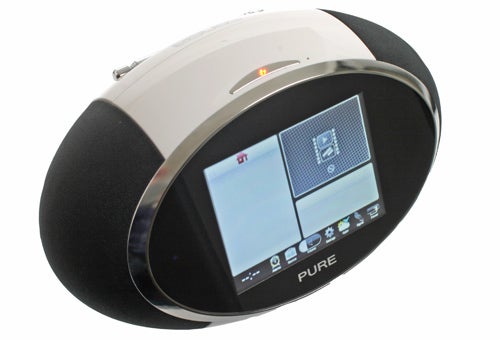 Unfortunately the learning curve for the actual touch interface is steeper. It’s split into three panels: the list menu on the left, the ‘visual panel’ in the top right and below it the info box where normal DAB info (among other things) is displayed. Running along the bottom, meanwhile, are all sorts of shortcut icons. This includes one for ‘Apps’, but irritatingly this doesn’t take you to the apps themselves, but tells you to “swipe the visual pane left or right to the first App” adding “to change the current App, swipe up or down to the App you want”.


Now, without prior knowledge (or referring to the quick start guide that explains it), it wasn’t immediately obvious to us what the ‘visual panel’ was. Thus followed much back and forth, head scratching and general consternation until some random prodding of the screen revealed the answer. Again, once you know how to find all this, it’s relatively straightforward, though a list would have worked just as well, if not better. 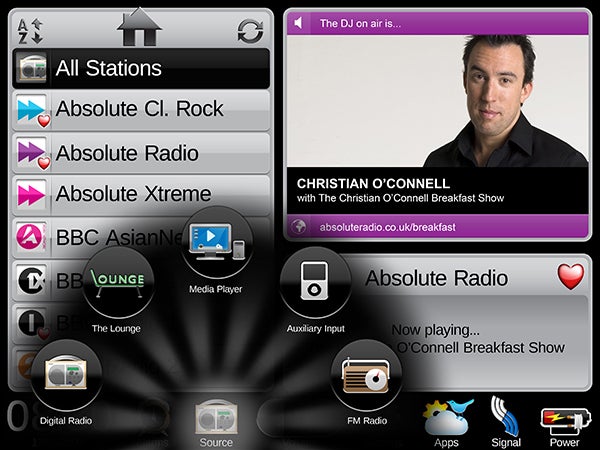 As for the apps themselves, while an interesting diversion, they’re far too slow and limited in scope to be anything other than that: diversions. It seems unlikely you’d resort to using them as your regular (or semi-regular) access point to either. We’re mildly more taken by the weather application, if only because it’s the sort of thing you might want in your kitchen or living room, but it’s similarly blighted by lethargy – a fact made worse when the applications are full-screened. We even encountered the odd crash, something that’s made doubly annoying by losing your login details afterwards! 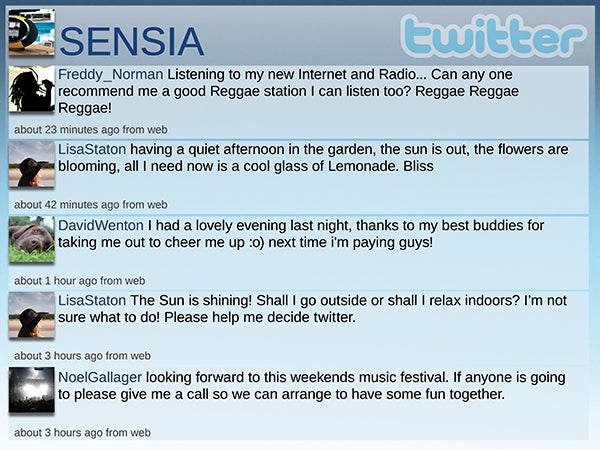 This sluggishness is true of the Sensia as a whole, too, though to a far smaller extent. While not snappy, the responsiveness of the touchscreen and the various menus is acceptable, particularly after applying the latest update (version 1.5). And, while the general navigation could be made simpler, it doesn’t take long to get the hang of things as the touch interface relies on the same swipes and flicks system as utilised on hundreds of touch devices.

Accessing the DAB radio functions is pretty straightforward: simply select what you want from the list, adding favourites (up to 30) if you so desire. In some instances broadcasters push slideshows to the visual panel, but the examples are few and far between and are of only limited value. We can see the appeal of this should more broadcasters adopt it, but for the moment the potential remains untapped. 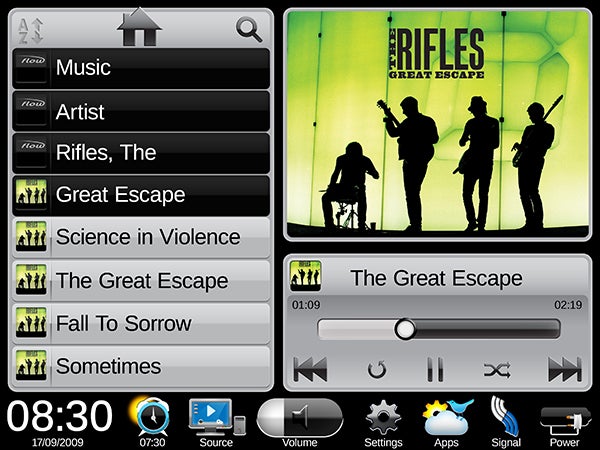 Unsurprisingly the Internet radio options are rather more extensive. Pure makes good use of its Lounge service, which allows you to link your radio to an online account accessible via a web browser. This makes it easy to shortlist and favourite stations, podcasts and PURE Sounds – a collection of atmospheric background noise clips – to then be accessed on your radio. When you see the number of online stations available, you’ll appreciate why this is useful. There’s also support for the BBC’s ‘Listen Again’ service.


In addition to the Internet Radio functionality you can also stream music stored on a PC or NAS to your Sensia. Album art is even displayed in the visual panel, while the info panel below it switches to playback controls and the list panel to your music library. This is a nice addition for those that stream their music across their home network and those that don’t can always rely on the auxiliary jack. 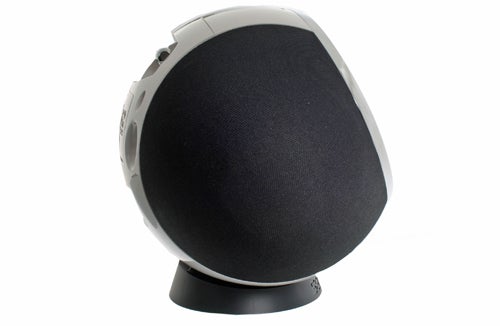 Of course one thing we’ve ignored up until this point is sound quality. Clearly an all-in-one box like this will never live in the realm of high-fidelity, but the spec talks a good game in proclaiming two full-range 3in drivers each outputting 15W RMS. The end product is passable without ever really impressing. There’s a noticeable burble of bass and enough clarity to produce pleasing enough audio, but somehow the output never hangs together as well as it might. It’s good enough for casual listening, however, which is about as much as it needs to be.


Or at least that would be the case were it not for the price. At close to £250 there’s no escaping the fact that the Sensia is a very expensive device. Unfortunately the patchy performance of its touch-sensitive UI, particularly the headline social media apps, makes it a difficult device to recommend. It’s easy to see the potential here, especially if the likes of Spotify, Last FM and Napster choose to jump on-board, but given how slow it is it seems unlikely the Sensia would be able to cope with more demanding services. 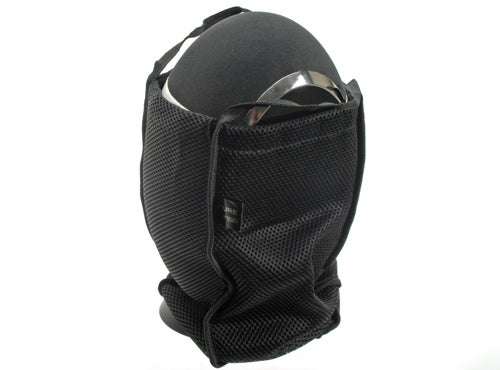 As such we’d recommend opting for Pure’s own Evoke Flow, perhaps adding the auxiliary speaker, instead. It might lack the street-cred of the Sensia’s eye-catching design and social media apps, but its Internet radio and DAB delivery is just as good and it’s a good deal cheaper. We look forward to future versions of the Sensia’s, but for now it remains a work in progress.


There’s plenty of promise in the Pure Sensia, but given its shortcomings and the high price you pay for them it’s only worth considering if you’re after style above substance.