Value. It has arguably become the most important score in reviews. A product can be good or bad, but if it is impressive ”in relation to its price” then that alone can turn an average device into a highly desirable one. So what about an excellent product that has had its price slashed?

The Monitor Audio i-deck 200 is such a case. The big brother to the £299 i-deck 100 we reviewed in October, it has had its original £400 RRP spectacularly cut to £250. This not only makes it cheaper than the i-deck 100 launch price (itself now cut to £200), but places it in an entirely new price bracket. This poses two important questions: do we have a £400 dock for £250, or an overpriced dock that is now closer to its true value? 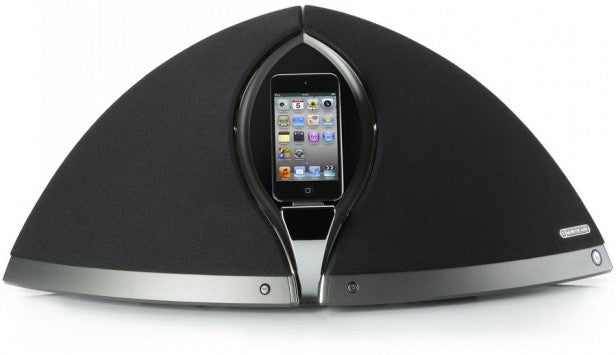 Out of the box signs certainly suggest the former. The i-deck 200 is very well built. Its curved design is similar to the JBL OnBeat and TEAC Aurb SR-100i, but the finish – despite the use of plastics, instead of wood or metals, is far superior to both. The triangular patterned rear is a notable talking point (as is the questionable inspiration for the glossy front gap which separates the speakers), but the quality of the thick, rubberised base, well fitted panels, reassuring power and volume buttons and smart, Zeppelin-esque spring loaded floating dock mount are beyond question.

In particular the dock is worth attention. By floating clear of the speaker’s body it does away with the need for different inserts for specific iDevices and it is strong enough to hold an iPad – a product many docks can’t accommodate. Furthermore the sprung dock connector both holds iDevices securely against the rubberised back and, like the arms on spring loaded glasses, allows them to be removed easily and without risk of damage. Should the dock connector break, the unit can even be swapped out without needing to send back the entire dock. Clever. 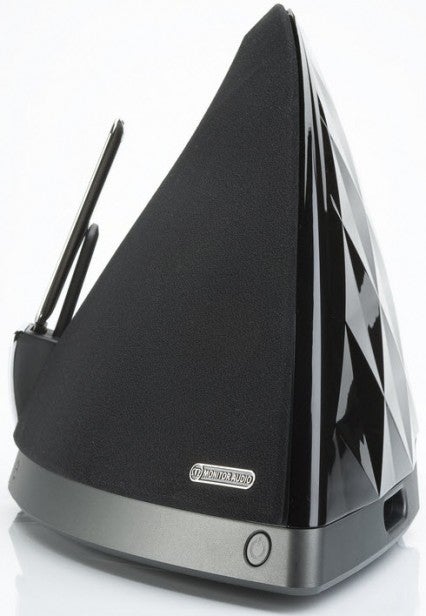 At 545 x 250 x 210 mm and 4.54Kg the i-deck 200 isn’t going in your bag, but it is light compared to the competition (500g less than an Arcam rCube for instance). Some of this weight may have been saved due to the relative lack of functionality – there is a 3.5mm auxiliary input, but no AirPlay, wireless streaming or battery. That said few will be complaining about the audiophile focused internals.

The core of the i-deck 200 is made up of dual 100mm C-CAM 4in bass drivers individually powered by custom-configured 50W amplifiers and a brace of 25mm gold dome tweeters, driven by 20W amps. That’s a 2.2 arrangement akin to the Soundfreaq Sound Stack and producing a whopping 140W in total, putting it in Zeppelin Air territory. Given Monitor Audio (formed in 1972 in Essex) has an illustrious history in loudspeakers, we expect good things to flow forth from this little lot.

Further adding to the Monitor Audio i-deck 200’s prowess is the inclusion of an in-built DAC (digital to analogue converter), something that only the upper echelons of the iPod dock competition include. This bypasses the circuitry of the iPhone/iPod/iPad (deemed substandard for audiophiles) and takes the digital signal directly, using its own 28/56 bit dual precision processing to do the heavy lifting.

Also, an innovative Automatic Position Correction (APC) system configures the output of the i-deck 200 depending on where it is positioned. In the rear of the i-deck 200 is a mic which produces three frequencies pulses (70, 85 and 100 hertz) and their reverberations help the dock determine if it is near a wall or corner. If the power button flashes once no correction is added, twice shows it is compensating for being placed near a wall and three times if placed near a corner. APC only kicks in if the i-deck 200 has been disconnected from the mains as this leads it to assume it has been moved.

All of which suggests Monitor Audio should have created a superb sounding premium dock, and thankfully it has.

In creating the i-deck 200 Monitor Audio has shot for a highly detailed, yet powerful dock with a very flat response. The outcome is just that. The role of the onboard DAC cannot be stressed enough as the i-deck 200 takes even low bitrate music and polishes it to produce outstanding results. Playback is precise yet powerful with the 2.2 configuration ensuring sound holds together even at its window shaking maximum volume. Feed the i-deck 200 320kbps or lossless audio and obviously results leap forward again. In particular acoustic and classical music spring to life, though it handles rock, dance and ‘big beats’ with equal ease. 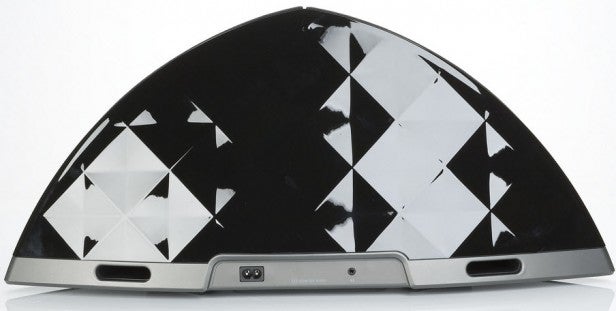 Key to this is the APC, a godsend for casual audiophiles, as it does succeed in adjusting output no matter where we move the i-deck 200. From living room table to bedroom corner to bookshelf, we were unable to fool the APC and this will be a real boon for listeners who prefer to arrange their audio around their furniture than vice versa.

If there is a snag it is that the i-deck 200 uses a Bass Level Management (BLM) system to optimise sound balance at lower listening volumes. This can be slightly crude at times, essentially working like a bass boost system, but only the pickiest will notice – and most will appreciate that music still has oomph even when listening at low volume level. Happily Monitor Audio avoids the trap we spotted with the Soundfreaq 2.2 Sound Stack, which chased accuracy and control at the expense of emotion. The Sound Stack remains a fine dock, but the i-deck 200 will do an equally fine job of keeping its composure yet at the same time raise the hairs on the back of your neck.

The smaller i-deck 100 offers similar levels of detail and openness but falls down when it comes to bass delivery, making it sound a bit weedy for hard hitting music such as rock and dance. The i-deck 200, though, fills these gaps nicely, making it suitable for all music types.

We rather passed over the dock’s lack of additional functionality earlier, but at its original RRP the omission of wireless streaming and additional inputs become glaring omissions when compared with the AirPlay enabled Zeppelin Air and Kleer touting, battery powered prowess of the rCube. Even the £299 Sound Stack has charging over USB as well as the Apple mount, plus Bluetooth streaming. The i-deck’s remote – while nicely styled – also sticks to the bare minimum (power, playback, source, volume) because there is nothing more the dock does – it’s also a little crudely made, with rather mushy rubber buttons. 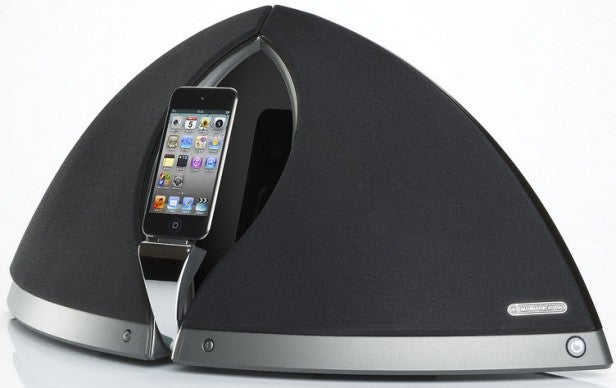 As a £400 dock the i-deck 200 would score 7/10 yet at £250 the picture changes completely. At £50 less than the Sound Stack we would go for the i-deck 200 every time, even with reduced functionality, and while we might be tempted to stretch to the additional £100 required to land the (similarly reduced) rCube, that is a significant further outlay. In short: if you can afford to spend no more than £250 on a dock, right now there is nothing on the market to touch the i-deck 200.

”’Verdict”’
The Monitor Audio i-deck 200 is the perfect example of a wonderfully repositioned product. At £400 it was overpriced given its limited functionality, but at a whisker under £250 consumers now have access to an iPod dock which produces audiophile sound quality at a fraction of the price. Build quality is excellent, operation couldn’t be simpler and it does what its narrow focus was designed to do exceptionally well. Never has a dock been better value for money.