Just a couple of weeks ago I took a look at the Logitech Squeezebox Boom. It was an impressive device that enabled you to connect over your home network to Internet radio stations and your digital music collection stored on your PC. It was very well made and sounded brilliant but it suffered from a couple of basic problems.


First and foremost was its overly complicated setup and user interface. It was just so packed to the gills with features that it was invariably a bit of a pig to get to the bits you wanted.


It’s other failing was its lack of any other conventional playback features. It’s all very well having access to thousands of Internet radio stations and your thousands of MP3s but for a standalone system it’s sometimes nice just to have the basics like FM radio or CD playback catered for as well, which is where the Pure Evoke Flow comes in.


This is a conventional tabletop DAB/FM radio that ”also” has Internet radio and media streaming capabilities. The key point being that it does the basics that we all want from a tabletop radio incredibly well then adds the extra functionality in a seamless and easy-to-use manner. 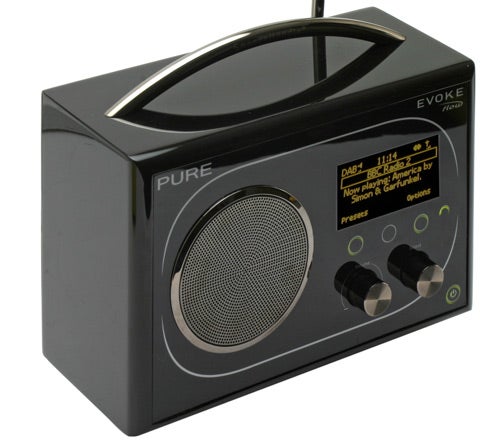 The Flow’s styling is classic Pure (see: Pure Evoke 3 and DAB Tempus-1 S) but with a modern twist. Gone is the wood veneer and faux brushed metal of previous models and in its place is a glossy piano black finish with some funky yellow highlights. It may sound a little garish and frankly it is and will certainly not be to everyone’s taste. The fit and finish, however, are exemplary.


All the signature little Pure touches are there like the touch sensitive SnoozeHandle and the battery compartment on the back that enables you to get up to 24 hours on-the-go listening out of this diddy box. This is only compatible with the optional £29.99 Pure rechargeable battery pack so if you run out of juice when out and about you can’t just nip to the shops for a few replacements. However, we reckon 24 hours is enough to deal with most situations and, assuming you keep the radio plugged in when in normal use at home, the battery should always be fully charged when you need it. 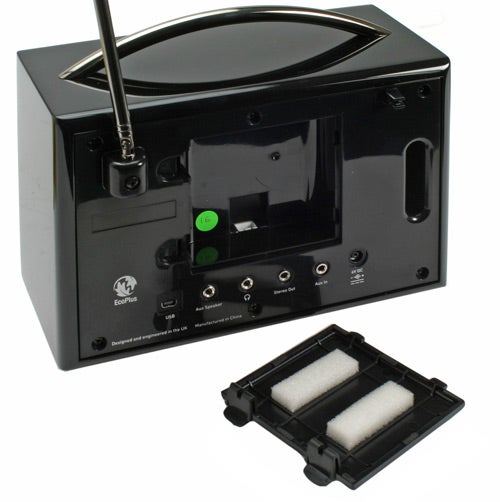 You’ll notice it only has one speaker but you can buy a matching second speaker that will give you full stereo. It’s only £34.99 so is well worth considering, though it must be said, while they’re not bad, Pure’s radios aren’t exactly built for their amazing sound quality, so it will be of limited benefit.

As well as the battery pack and the connection for the extra speaker, the back is home to a headphone jack, stereo in and out jacks, a USB socket, and the power socket. You may also notice the EcoPlus symbol. This marks this radio as complying to Pure’s own green credentials, which include things like low power usage of the radios themselves and the use of 100 per cent recycled paper pulp for the internal protective trays in the packaging. This is obviously very welcome but it must be said the policy is far from a catch all with things like the main box still using a lot of non-recyclable inks and plastics.

While the Evoke Flow’s two main control dials should look largely familiar to anyone that’s used one of Pure’s previous models (and even if you haven’t, volume and select are pretty self explanatory), the rest of the interface will be new to everyone. It uses an array of touch sensitive buttons. The three that sit under the screen are context sensitive so their function changes depending on what’s on the screen at the time. The combination of these three buttons and the select knob enable you to navigate through menus at lightening fast speeds. Something which is helped no end by the fact that the menus are incredibly intuitive.


Every function you could imagine is where you would expect and is quick to access no matter what else you’re doing. Even text entry, which is needed for searching the hundreds of Internet radio stations, is simple and snappy. 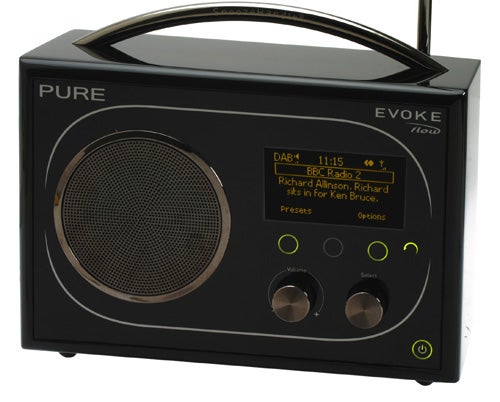 The screen also helps a great deal in this regard. It can display multiple lines of information at once so you’re never left endlessly scrolling to find the information you want. Also, as well as having very high contrast levels, the OLEDs it uses are completely resistant to any of the usual problems with viewing angles that plague LCD panels. No matter what direction you’re looking at it from it’s always perfectly readable. It’s also light sensitive so it auto-dims when used in the dark, which makes it both kinder on the eyes and easier to live with if you’re a light sleeper.


Taking at closer look at the basic functions, the Flow can tune to both FM and DAB and can store 10 presets for the former and 30 for the latter. Tuning (FM) or station selection (DAB) is achieved using the select control and quickly flicking it will set the list of DAB stations free wheeling, saving you from continually spinning the knob. Tuning performance was not the best we’ve ever seen at our office where the signal is poor. We sometimes manage to coax a few stations to appear on some radios but we got nothing with the Flow. At my home however, where the signal is good, it picked up as many stations as any other radio we’ve tested. 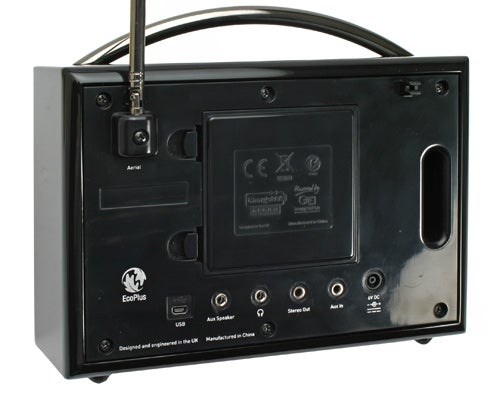 Tuning into Internet radio station or hooking up to your personal music collection requires you to establish a network connection, which if your network is secure can be a bit of a pig as you have to enter the long security key. There’s also no wired connection, which, even given the ubiquitous nature of wireless nowadays, seems like something of a miserly omission.


To listen to your own music collection you must either stream music from your computer (most commonly by setting up your computer as a music server using Windows Media Player 11) or the Flow can connect to any UPnP server, which most NAS appliances have. Setup can be a little tricky if you’re not sure what you’re doing but once you’re underway, browsing and listening to your music is very easy with music filtered into artists, albums, and songs, just like you’d get on a normal MP3 player.

It’s a similar story with Internet radio stations. Once you’re connected you can browse the available stations in a variety of ways including by genre, location, popularity, or simply by searching. Rifling through the long lists of options and inputting text for searches is made as easy as possible by the quality controls and screen but even they have their limitations. It is instead easiest to use what is undoubtedly the Flow’s trump card; The Lounge. 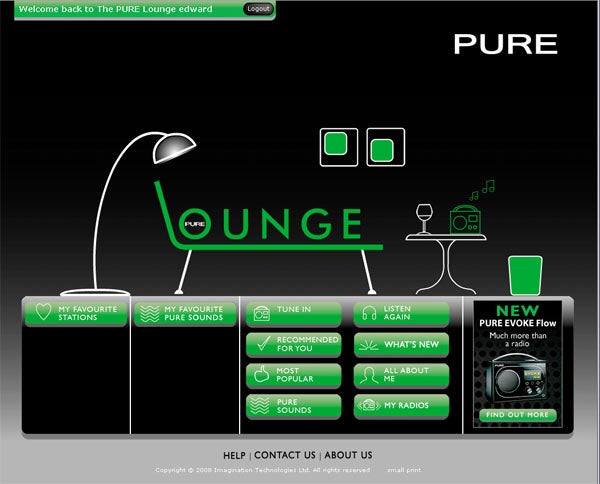 This online portal allows you to manage all your favourite radio stations, podcasts, and PURE Sounds (I’ll explain more about the latter in a moment). The great thing being that you can use the full extent of you mouse and keyboard to quickly locate your favourites and organise them, creating custom folders and generally customising everything just as you like. It really does make all the difference. 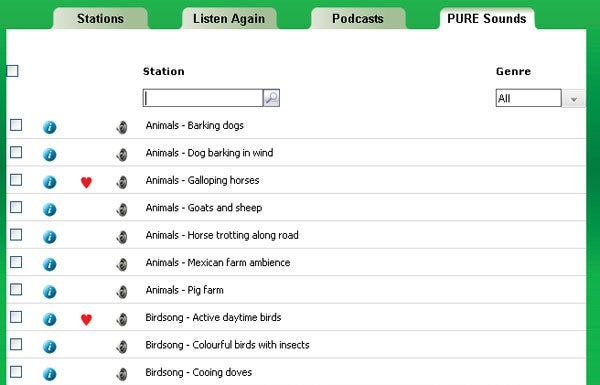 As for those PURE sounds, these are another trademark of Pure’s radios. They’re basically a collection of sound effects like whales calling, birds tweeting, and waves crashing on a beach (as well as less pleasant ones like engine noises, howling wind, and an electric typewriter) that you can use just for background ambience or as a gentle way to wake you up. There are over 80 different sounds to choose from so no matter how obscure your fancy dress party you should always have an appropriate selection of noises to set the tone. 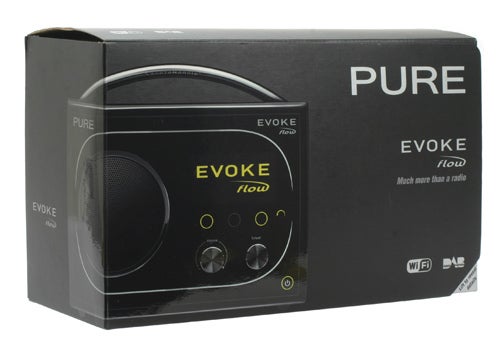 As mentioned earlier, sound quality is not one of the Pure Evoke range’s strong points. Volume is adequate for the kind of use this radio would see and clarity is also plenty good enough to do spoken word programmes, lightweight pop and classical music justice. However, bass is decidedly lacking so rock, dance, RNB, and any other more complex and full bodied genres of music do sound a bit weedy.


The stunningly simple design of Pure’s radios has seldom failed to impress us and this latest Evoke Flow is a perfect example of that. Something that is doubly impressive considering the wealth of features it packs in. Quite simply, if you want an easy to use, lightweight, and well made Internet/DAB/FM radio and music streamer, this is the one to get!