Just as vinyls have bitten the dust, VHS tapes have gone the way of the dodo and Minidiscs are a mere memory, CDs are on the way out. And if Spotify, Napster and co. have anything to say about it, personal digital music collections’ days are numbered. These music streaming services want to become your no. one destination for tunes. But which is the best? We’ve taken a close look at Napster, Spotify, Rdio and Pure Music to find out.

If you have a smartphone that’s not an Android device or an iPhone, it’s pretty clear you’re best off with Spotify or Rdio. They’re the only music services to have put a great deal of effort into covering all the main bases – including Symbian, BlackBerry, Windows Phone 7 and even the basically-dead WebOS. It’s impressive stuff, although compared the iOS version, the others tend to look a little neglected.

The outlook on the other services is a lot worse. Napster and Pure Music have iPhone apps, but aren’t at all optimised for iPads – although the iPhone/Android combo is likely to satisfy a fair chunk of the population. iPad fans should look to Spotify or Rdio, as using a blown-up iPhone app doesn’t look good.

Sonos user? The only one that doesn’t play ball with the multi-room system is Pure Music, but that’s partly because its motivations are a little different from the rest. Pure Music is designed in part to be used with the company’s connected radios, such as the Pure Evoke Flow, so supporting every platform under the sun is less of a priority.

iPhone app quality
Spotify – A little spartan but efficient
Napster – Great, with some insight into artists
Rdio – Simple, fairly effective
Pure Music – Needs a little polish, but has some features others lack

Music streaming iPhone apps have been around for years now, so it’s no surprise the dedicated streaming names here – Spotify, Napster, Rdio – have all leaned towards a similar aesthetic for their apps. Fancy visuals beyond album thumbnails are kept to a minimum in order to make navigation quick and easy.

Aside from the slightly different Pure Music “Pure Lounge” app, most people’s listening will be based around two sections – the search and radio. Radio makes up a streamed playlist of tuned based on a single artist or genre. Instead of offering this, Pure Lounge offers good, old fashioned internet radio. Sensibly, it orders the most popular UK stations up top, such as BBC Radio 4 and 5 Live.

However, we also found the Pure Music to be the slowest to load search results and the like, meaning it requires that bit more patience and doesn’t feel quite as slick. It’s also the worst-looking of the bunch and is a bit buggy. The rest feel a little more slick and professional.

The one other app that differentiates itself with its approach is Napster. It jams in little editorial descriptions of artists and sub genres, and does so neatly enough to let you easily ignore them if they’re not your bag. It’s a great bonus when you’re looking for new music. On the web interface, there’s also a blog called The Mix, which features articles written by professional music journos.

Plus, it offers a few dozen pre-programmed “radio stations” (essentially shuffling playlists) with themes such as 80s Metal, One Hit Wonders and Sad Songs. Yes, most are a little cheese-ified.

In use, Spotify, Napster and Rdio are all very effective. But Napster wins out by a hair for its neatly-integrated extra bits. That said, Spotify is the most carefully-styled.

Spotify also offers apps that hook into your account, ones made by companies other than Spotify. These let other companies suggest playlists and other such fun stuff – the most recent tie-in was with Virgin Media. We don’t think it’s necessarily something to factor into the buying decision of the average music lover, though.

Aside from Spotify, which demands you download a proper desktop app, these services all have web-based desktop interfaces. You simply head to a URL, log in and you’re ready to go. This removes a load of compatibility headaches, but can also feel a bit wonky and cheap.

The Pure Lounge website in particular strives to look like a full iTunes-style app, fitting quite an info-packed UI into the screen. Of course, the more you try to cram in, the more the additional loading time of a webpage becomes apparent. And, once again, Pure loses out to its competitors. It doesn’t feel quite as quick as Naptser or Rdio, and its interface traditionalism can come across as a bit old-fashioned.

Like the iPhone app, the Pure Lounge also includes internet radio access, making it a bit more useful as an all-round audio hub. 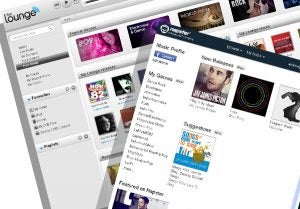 Rdio opts for the simplest look of the lot. Almost all-white and with barely any interface elements to demand you attention beyond the small nav bar on the left, it’s all about the search bar here. It’s not feature-poor, though. As with Napster, you can choose songs to sync to your mobile’s library from the website, creating a seamless connection between the two streaming types. All three let you create playlists too.

Once again, Napster’s editorial descriptions of bands and genres make a return, although they seem less handy when you’re already within a browser.

Spotify is the outlier here, only using a Windows/Mac OS X app rather than a web interface. Napster and Rdio also offer an app version of their interface. The benefit of this approach is that it feels a little more robust, as it’s just the information within the interface that has to be “downloaded” rather than the interface itself.

Spotify offers the best streamed sound quality – and by a clear margin. When signed-up to the Premium service (required for mobile use), you can opt for 320kbps Ogg Vorbis quality whether using a mobile phone or the desktop app. Not all content is available at this “Extreme” settings according to Spotify, but even the step-down 160kbps is significantly better than an MP3 file at the same quality.

Napster offers what we would describe as a respectable audio fan’s top option. The selectable high quality mode streams at 192kbps – with a 64kbps on hand if your connection is a bit dodgy or you’re looking to save bandwidth. As the service primarily uses the effective eAAC codec, the top setting is virtually indistinguishable from uncompressed files.

Rdio has not publically revealed info on the codecs and bit-rates it uses. The last word on it was that the company is experimenting with bit-rates. We’d bet the quality isn’t that high, and while there was not a disastrously different quality of sound evident from our A-B comparison testing, if sound quality is your top concern, you’re better off looking elsewhere. 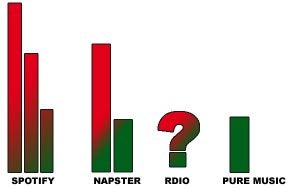 Slumming it down at the bottom once more, though, is Pure Music. It uses 128kbps MP3s – a low bit-rate and a fairly inefficient codec. A good encoder must have been used because while some digital degradation is fairly clear with good headphones, we’ve heard much, much worse MP3s at this quality.

We’d rule out Pure Music if you have a discerning ear and want to find a streaming service to do the majority of your listening with. Pure says the quality is designed to suit its radios, most of which don’t cost a great deal and use fairly petite 3in drivers. This level of encoding is just about ok for kitchen top radios like Pure’s, but anything more challenging deserves better.