What is PS TV?

PS TV is a small black microconsole that essentially packs the guts of a PS Vita into a small black box. This means you can connect it to a TV and play PS Vita games both physically and digitally, download films and TV shows from the PlayStation Store and access the PlayStation Now cloud gaming streaming service when it eventually launches in the UK.

Sony’s big play with PS TV though is Remote Play. That’s the ability to play and resume PS4 games on another TV, as long as you have the next gen console of course and a good internet connection. For well under £100, it sounds like a no brainer even if you haven’t already invested heavily in the PlayStation ecosystem but the truth is the features that should make it great, are not quite there yet or simply not available at all. 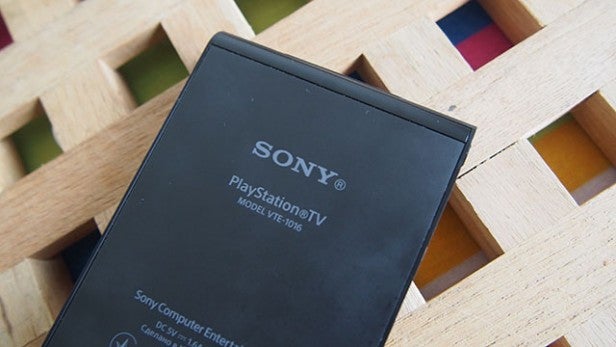 The good news about PS TV is that it’s not going to take up much space. It’s a tiny little thing that’s about half the size of the a 5-inch phone like the Moto G. Sony has gone with the same matte black plastic finish as the PS4 giving it a clean, minimal pocket-friendly look. While its size and stature does give it great space-saving credentials, it does count against it when you get it set up. Try plugging in wires into all of the available ports and the lack of weight in the PS TV box means it’s liable to fling itself around from the pull of the cables.

The key connectivity spots are kept to one side, where you’ll find space for the mains power alongside an ethernet, HDMI and USB ports. It’s also where you’ll find the PS Vita memory card slot, which you will inevitably need to utilize once you realise there’s just 1GB of onboard storage.

The power button sits on the same edge and breaking away from the back is the Vita game card slot securely hidden behind a latch that’s quite tricky to prise away from the PS TV’s body. There’s just one solitary small light on the opposite edge to indicate when the system is on and doesn’t shine too brightly to become any sort of nuisance for night time gaming sessions. 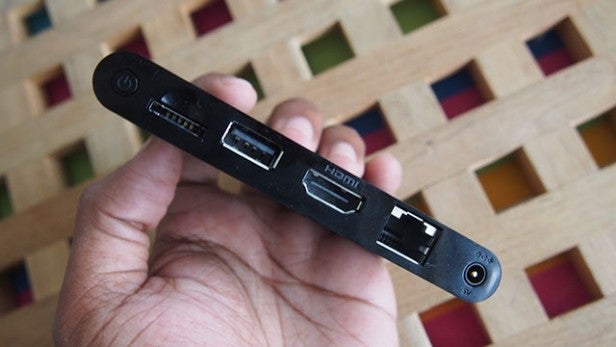 What’s in the box is quite important in terms of what you will have to shell out extra for. In the basic package you’ll also find a HDMI cable along with the mains power cable and a voucher for three free games. That does still mean you need either a DualShock 3 or DualShock 4 controller along with a USB cable and an ethernet cable for making a direct physical connection to your router. Sony will offer bundles with controllers, but there’s an assumption here that you already have these in a drawer or cupboard somewhere.

Getting things up and running is relatively straightforward. It’ll take you around ten minutes before you get to the homescreen after setting up things like time, date and an internet connection.

You’ll need to plug in the mains and hook the HDMI cable into the TV and have a controller physically connected to the box to navigate the interface. There’s no remote bundled and despite the increased support for Sony’s smartphones in the PlayStation ecosystem, it’s disappointing neither the Sony Xperia Z3 or Xperia Z3 Compact can’t be used in some way as part of the PS TV setup.

If you already own a PS Vita the setup will be a familiar place. You’ll need to use the same SEN (Sony Entertainment Network) account assigned to your PS4, or set up one if you are a new user. Like the Vita, you can only have one account assigned at a time so you don’t have the same multiple profile options as the PS4. You do have the option to set up sub-accounts for younger PS TV users so you can better monitor access to the more unsuitable content. 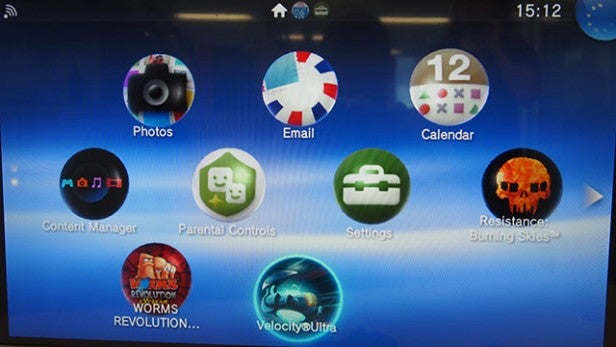 The user interface is identical to the one used on the PS Vita using the same floating circular icons that’s ideal for touchscreen use but doesn’t really transfer over to a big HDTV. It looks far from optimized and feels a bit lazy not to design something that’s better suited to a TV when touchscreen input is not available.

There’s a bigger problem and that’s to do with the fact the PS TV outputs to a maximum of 1080i. It’s set up at the 720p HD supported by the Vita so you’ll need to adjust this in the settings. Doing this will improve the sharpness of the UI, because in 720p HD it looks pretty terrible.