Sony’s big push is on PS4 Remote Play. This works in pretty much the same way as it does on the PS Vita, letting you play next gen games on another TV in the house. Like Sony’s handheld, both console and microconsole need to be on the same Wi-Fi connection and preferably a hard wired ethernet connection to get the optimal performance. Our experiences using this on the Vita and the PS TV were slightly different.

Following the same setup as PS Vita Remote Play, we first hooked the PS TV to directly to the router using the ethernet cable leaving the PS4 running on the Wi-Fi as this is likely to be the setup most will use. After a couple of minutes of establishing a connection we were up and running playing PS4 games on the TV in the living room. The good news is that the games don’t look terrible but you won’t exactly feel like you are playing on your PS4 console.

We tried out the Pro Evolution 2015 demo, FIFA 15 running from the disc and downloaded games like Fez and Trine 2 to test out. Initially there’s some lag and it’s noticeable enough to hinder the smoothness of gameplay. It does sort itself out after a while though, giving us a similar experience to using the Vita for Remote Play using Wi-Fi. The resolution output is the most telling thing here, it’s a maximum 720p HD for Remote Play. Until Sony can get it running higher than that, Remote Play on a big TV using PS TV is always going to be great but never as good as playing it with a PS4 directly connected to it. 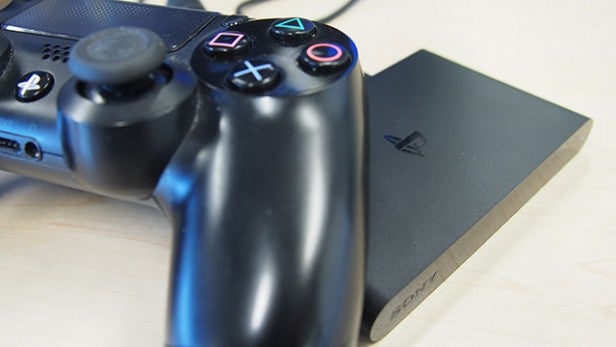 In theory there’s plenty of gaming to get your teeth into here. On the physical side, there’s a PS Vita card slot hidden behind a difficult to open latch on the box itself. There’s no straightforward way to connect the PS Vita handheld to a TV so in a way this is a solution around the problem. Before you rummage through your Vita collection, there’s a select amount of games that are supported by PS TV. The reason games like Uncharted: Golden Abyss are not compatible is because of they have been optimized for the Vita’s touchscreen support. It’s just one of many games, we would have loved to be able to try out on a bigger screen.

Once you do find a compatible game, you can simply slip it into the card
slot and after installing and checking for some updates you are up and
running. It’s an improved experience in comparison to running Remote
Play but that resolution problem crops up again, and you simply don’t
get the same glossy, sharp quality you get on the PS Vita handheld. 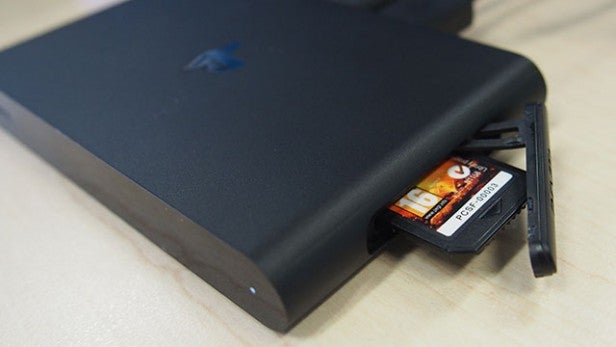 As way of a gift or gifts, Sony includes a voucher in the box for three
PS Vita digtial games. There’s Worms Revolution Extreme, Velocity Ultra
and the brilliant OlliOlli.
If you don’t already own a PS Vita memory card it won’t take long to
figure out that you have just enough space to install all three games on
the internal storage.

There’s a vast collection of games here and whether you are willing to pay £45 or £5, there’s plenty to get you started. The good news is that if you have already bought PS Vita content from the PlayStation Store, you can download them without purchasing them again as long as it was done using the same account as the one registered with the PS TV. 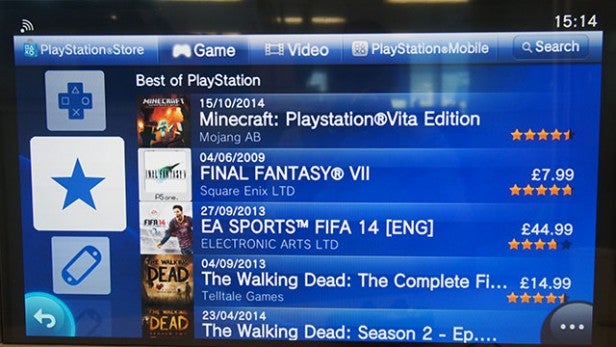 One thing that would have made PS TV great is PS Now. The streaming gaming service where you can rent and play games from the PlayStation back catalogue is currently in beta in the US and UK users won’t be able to try it out until next year. Switching to a US PlayStation Store account we did get to snoop around the application to see how it looks and to get an idea of the kind of games you’ll be able to play and how much subscriptions cost. In the US, rental periods start from 4 hours ($1.99) all the way up to 90 days, which costs $14.99. It’s certainly not cheap and a monthly rental costs about the same as a PlayStation Plus monthly account and that’s just for a single game.  There’s is at least a decent catalogue of games there and a big shame it’s not ready for the UK just yet. 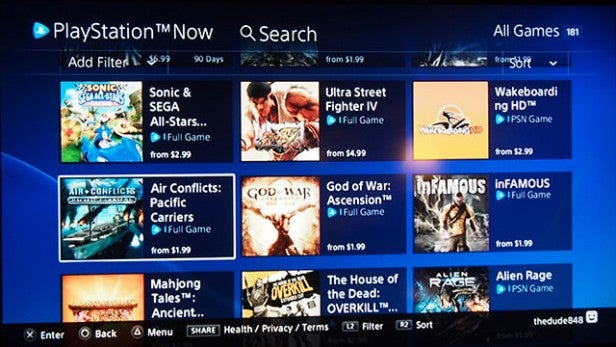 Looking beyond games, you will also be able to download apps and purchase video and music content from the PlayStation Store. If you already have a credit card assigned to your account, you will be prompted to verify your details during the setup stage. Now the Store is up and running, you’ll be able to browse video from navigation bar at the top. This will bring you to the landing page where you can find a collection of films to rent and purchase. Unfortunately, as the image below illustrates, purchasing a film is pricey and you only have the standard definition copy to choose from. 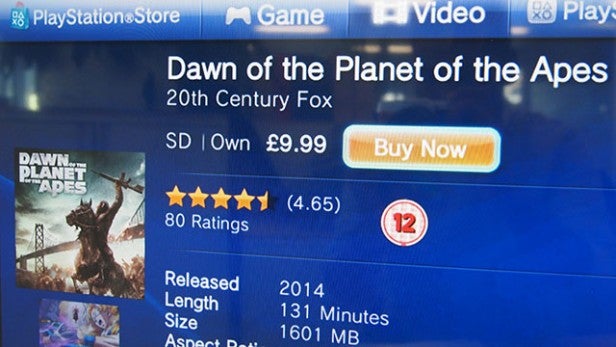 For apps, it’s as bare as the US PlayStation Store. If you want to watch Netflix or Amazon Instant Prime Video like you can on the PS4, you are out on the luck. Trying to use Remote Play to access them through the PS4 sounds like a potential work around but that doesn’t work. You can check in on Twitter with Sony’s version of the Twitter app and stream music from TuneIn Radio but on the whole this is a pretty poor showing. 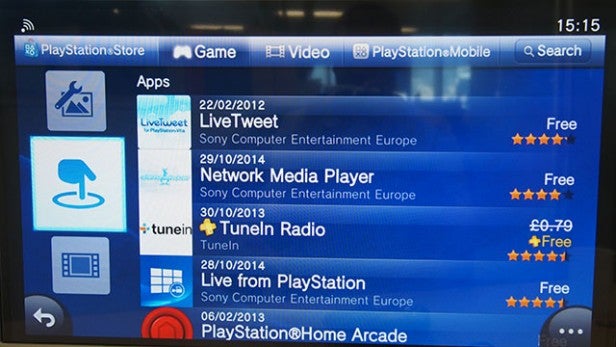 Should I buy PS TV?

The PS TV has potential to be a great piece of gaming hardware, but right now it’s just not in a good enough state to recommend it.

We are not really sure who the  PS TV is meant to be for. It’s not a fully fledged streaming set top box to rival Apple TV or Kindle Fire TV and the Remote Play is not really up to scratch. If you own a PS Vita, the Remote Play experience is more reliable on Sony’s handheld and looks much better on a smaller screen. Even if you own a PS4 and want to have this set up in another room, how
much of hassle is it really to move your console to another room these
days?

Another issue here is the price. It might say £84.99 on the box, but in reality it’s going to be more if you don’t already own a DualShock controller or a PS Vita memory card, which doesn’t come cheap. An 8GB one from Amazon costs around £25, while a 16GB one is around the £35. You actually need to spend closer to £100, if not more.

Once there’s a better support for the Vita’s back catalogue, the network media player is actually available and you can actually tap into PlayStation Now, we’d say keep your money in your pocket for now.

After our initial excitement for PS TV, the microconsole is not the PS4-streaming marvel we’d hoped it would be.