The Nord N10 doesn’t seem to be the usual quality I expect from OnePlus, but so far it appears to be a decent cheap 5G phone at least. I can’t see it appealing to OnePlus die-hards though, which is a shame given the distinct brand this phone heralds from.

In stark fashion to its usual hyped launches, the OnePlus N10 was released with little fanfare. No VR YouTube unboxing or weeks of Twitter hype, just a simple press release and little else. After using the N10 for a few days, it’s clear why.

The OnePlus N10 is the second entry in the Nord series and it’s marginally more affordable than its previously-released sibling. There’s an even cheaper model too, the N100, which will retail for £179.

One thing was immediately obvious when I unboxed the N10 – it didn’t feel anything like an OnePlus phone. This feeling only continued when setting up the phone and using it, something was just missing. That spark that usually sets these phones apart was gone, and I could have been using any old Oppo, Huawei or budget Motorola device. 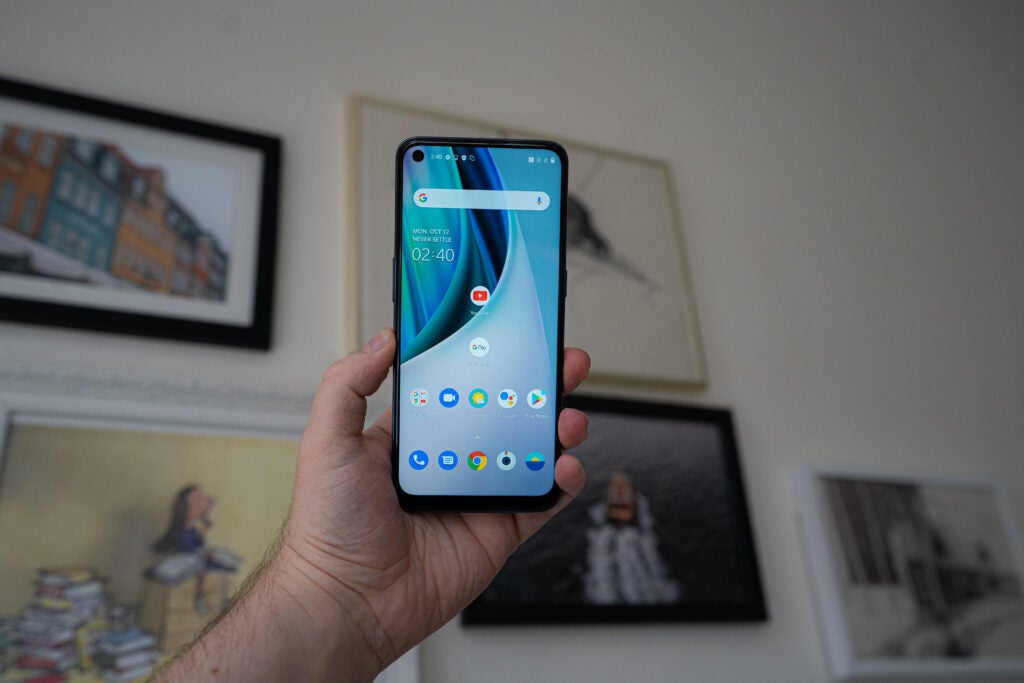 There isn’t one specific thing that makes it feel like this, but a number of little things. The iconic OnePlus ringer switch – which lets you easily mute the phone – is gone; the colour choices are boring; the design is forgettable and it feels very plasticky. It lacks that premium finish that even the Nord was able to convey, and if you removed the OnePlus logo on the back then there’s little to identify it. The final blow – it’s not even running the latest version of Android like the OnePlus 8T.

In terms of specs and feature set, the OnePlus N10 is perfectly capable. Although with the Nord being just £50 more (and feeling so much more like a true OnePlus phone) I am not sure who this is made for. Inside the phone there’s a Snapdragon 690 chipset, 5G support and 6GB RAM. It’s fast to use, so far anyway, and has expandable storage for the first time since the OnePlus X.

While the OnePlus Nord has an OLED panel, the N10 switches that out for the cheaper LCD kind and as a result, it’s a little dull and lacks the punch I would expect. It also doesn’t seem to support the wide P3 colour gamut, something OnePlus has highlighted consistently in the past. Still, it’s sharp thanks to the 1080p resolution and smooth due to the 90Hz refresh rate. 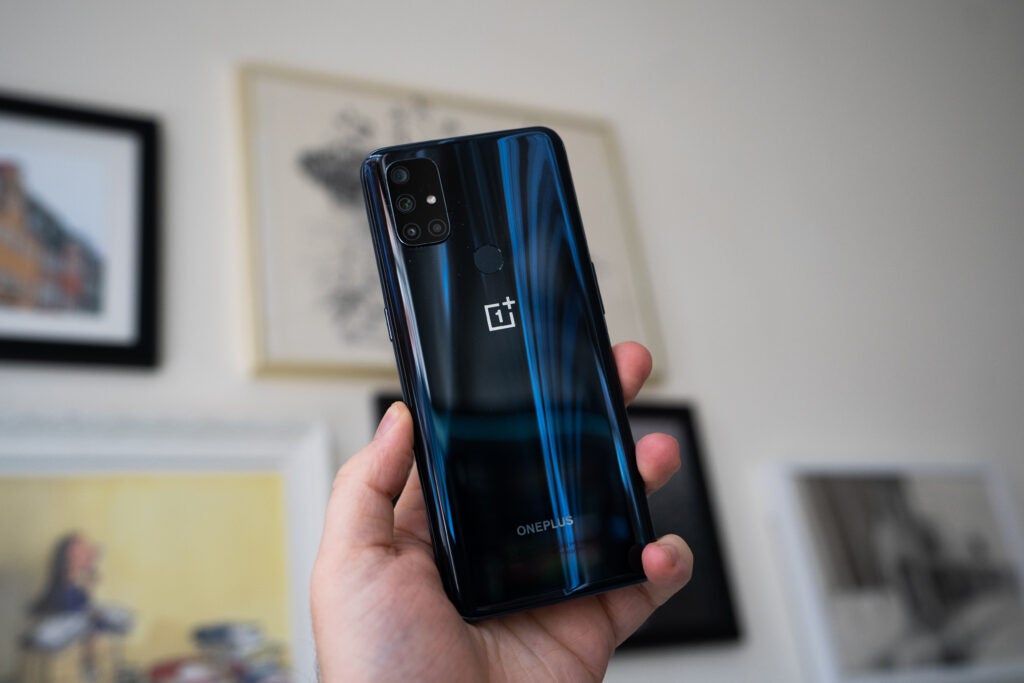 Flip the phone over and there are a few interesting bits. OnePlus has reverted to using a fingerprint sensor on the back and there are four cameras tucked inside an oblong housing. Two of these can be dismissed immediately as they are a 2MP monochrome lens and 2MP macro. I took a few pictures with the macro and honestly you’ll get better pictures by zooming in from the main sensor. The day when macro cameras are left on the cutting room floor can’t come soon enough.

The main 64MP camera seems fine and there’s an 8MP ultra wide, but you can expect a more in-depth take on these cameras in our full review.

While the specs are adequate for the price – though the Moto G 5G Plus is cheaper and more tempting – the design and build is somewhat disappointing. This is when you compare it to what we’ve seen from OnePlus before, rather than what else is on the market. This feels more like an Oppo or budget Huawei phone, completely plastic and with an odd reflective rear that isn’t very attractive. It’s an absolute smudge magnet too, something OnePlus managed to avoid with the Nord. Honestly, this doesn’t feel like a phone designed by OnePlus – but a rebadged body without any of the nice touches I expect from the brand. Even the single Midnight Ice hue is dull. Where’s the Aquamarine that looks so good on the other OnePlus phones? 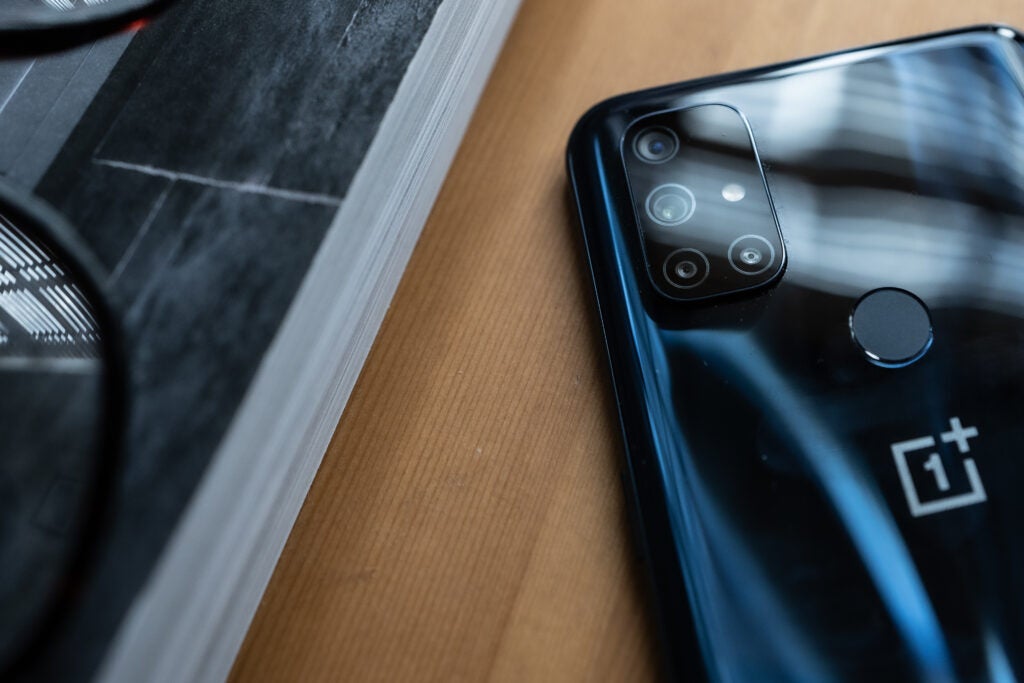 You do benefit from the Warp Charge 30T to quickly charge the 4300mAh battery which is great.

When compared to the Nord, which is only £50 more, the N10 feels like a very odd release. For the extra cash you get a phone that has that distinct OnePlus DNA, plus a faster chip, far better display and a nicer design. The Nord also has more RAM at 8GB, higher quality Gorilla Glass and an in-display fingerprint sensor.

The Nord N10 doesn’t seem to be the usual quality I expect from OnePlus, but so far it appears to be a decent cheap 5G phone at least. I can’t see it appealing to OnePlus die-hards though, which is a shame given the distinct brand this phone heralds from.