For £299 (or £349 for the 6GB RAM version) you’re a getting an Android phone that easily matches handsets that cost twice the price. Performance is great, the software is clean and the screen is bright and fast. It charges up quickly and lasts for ages and it even takes pretty good photos. Add to that 5G and the new Moto G easily earns a place as one of 2020's best value smartphones.

The Moto G 5G Plus is a fantastic device. It’s amazingly cheap and boasts a whole range of excellent features that help it outperform nearly every other £299 phone to arrive this year.

5G has been around in the UK for over a year now and while it’s yet to make its way to an iPhone, you can already find super-affordable Android phones sporting the next-gen connectivity tech.

Among those choices are the OnePlus Nord, Realme X50 5G and the Moto G 5G Plus – with the latter of the bunch arguably the most exciting.

The Moto G 5G Plus is a similar phone to Moto Edge, packing the same chipset and tall display, however it’s far cheaper and more accessible.

The Snapdragon 765G is becoming everyone’s go-to chipset if you’re not shipping a full-on flagship with the top-end 865. We’ve seen it in phones sub-£600 and now it’s showing up in devices I’d properly class as ‘budget’. I’ve long believed that most people don’t need the added speed and graphics seen on top end chips. For the majority of smartphone users the 7-series is more than good enough– especially for a sub-£300 phone.

The Moto G 5G Plus is the smoothest and fastest Moto G phone I have used, and considering I have never felt these phones were slow that’s a big compliment. It’s on par with far pricier phones running the same chip, like the Moto Edge, and I would even say the performance is better, and far more reliable, than the LG Velvet. It’s a capable gaming device too, with titles like Call of Duty Mobile making use of the 21:9 tall display to give you more room. Gaming isn’t quite as snappy as on high-end phones, especially with graphically intense titles that really test the mid-range GPU, but if you’re after a gaming phone you probably know you’re going to spend more.

My review unit is the model with 4GB RAM, though you can pay slightly more and up that to 6GB. Now, while I wouldn’t normally worry about RAM, 4GB feels like the least I would want in an Android phone now. I haven’t noticed anything untoward so far, aside from how quickly apps fall out of memory, however over time this could be one of the things holding it back. If I was to buy the phone I would plump for the 6GB model, just to have that extra headroom when multitasking.

The biggest benefit to the chipset is its 5G modem. The Moto G 5G Plus works on the sub-6Ghz 5G network and gives you access to 5G (along with 4G, 3G etc) if you have the right SIM, plan and are in a 5G area. 5G isn’t overly widespread yet, but if you’ve got it the benefits are clear and 5G works just as well here than it does with any other phone I have tested.

Audio quality, on the other hand, isn’t the best. There’s one speaker on the bottom and while it is loud, it’s easy to cover with your hand when you’re watching landscape video. While it looks like there’s a secondary speaker on the top, this is just a mic for the voice calls – which are good quality. 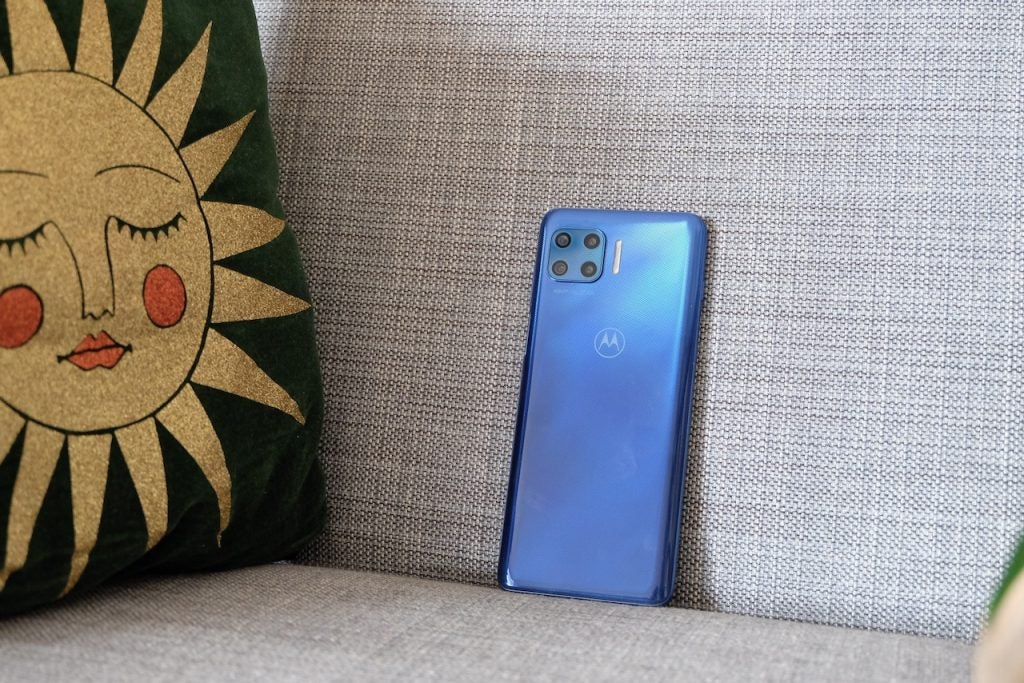 At least you’ve got a 3.5mm headphone port on the bottom, next to the USB C charging point.

Motorola’s software is very much Android as Google intended it. The only additions over the very ‘stock’ launcher are handy Moto tweaks like quickly opening the camera with the twist or ‘chopping’ to turn the light on. You’ve also got the handy Moto Display that’ll bring up notifications when the screen is off. However, as we noted in our Moto Edge review, there are a few software bugs present here. Icons will sometimes become unresponsive, the phone rebooted itself a few times during the review period and sometimes I was met with a blank screen after unlocking, Hopefully these will be ironed out in a software update.

You’d be forgiven for thinking Motorola would work hard to introduce 5G at a budget price and then forget to make a good phone around it. That’s far from the case, though.

Take the screen: this is a 21:9 (so very tall and narrow) LCD panel measuring 6.7-inches and with a 2520 x 1080 resolution. It’s bright, sharp, colourful and the wide aspect ratio makes it great for media. The screen is disrupted slightly by the duo of front cameras, however I do like how they’re separated – rather than stretched into one single pill box.

Like the Moto Edge, the display here refreshes at 90Hz, giving it a smoother look than previous Moto Gs which all have 60Hz panels. It also gives the Moto G 5G Plus a leg-up over the far pricier Oppo Find X2 Lite. It’s not the best interpretation of 90Hz I have used and it does very occasionally flicker, but again the price here will be affecting that.

The obvious downside is the use of an LCD panel rather than OLED (which you’ll find on the pricier OnePlus Nord). This means blacks are a little washed out. Motorola also says there should be HDR support, but, again, you need an OLED panel to make the most of this tech.

My other biggest qualm with the display is just how reflective it is. It seems to catch and reflect any light hitting it and I have found always using the display at its brightest setting even if the room I’m in isn’t that bright. 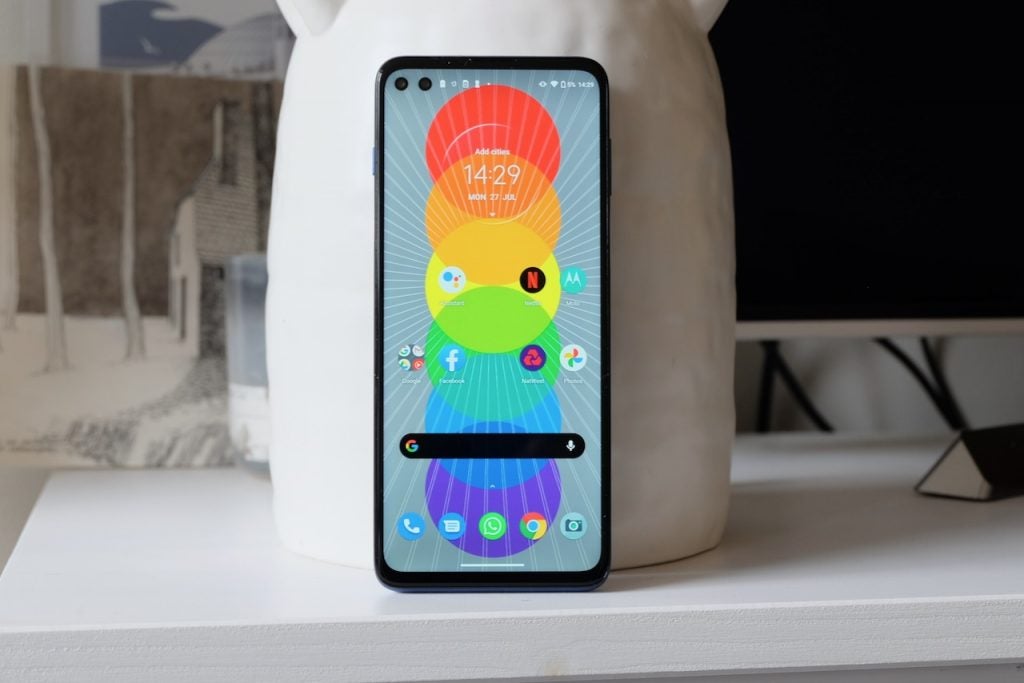 The Moto G 5G Plus isn’t an ugly phone. Far from it. It’s just that it’s the one area where it feels like a £299 device.

It’s clad in thick, bulky plastic with a smudgey, greasy finish. My review unit has a blue hue and the back has this carbon fibre pattern underneath the plastic. It’s inoffensive, but I am not the biggest fan. Still, I have dropped it several times and there’s not a scratch or mark in sight. Phew. Sometimes a little less plastic and glass is a good thing.

The fast and reliable fingerprint sensor sits inside the physical lock switch on the side; there’s a headphone port on the bottom and even a dedicated Google Assistant key on the side. While I do like quick access to the Assistant, being able to customise this key to the camera would have been even more welcome.

If you’re looking for a small phone then you’re looking in the wrong place. While the G 5G Plus doesn’t look huge, the wide screen means it’s very tall and though it’s narrow enough to grip comfortably in one hand it’s a struggle navigating the UI without both hands.

An official water resistance rating misses the cut in making this cheap phone although Motorola does say it is splash resistant. 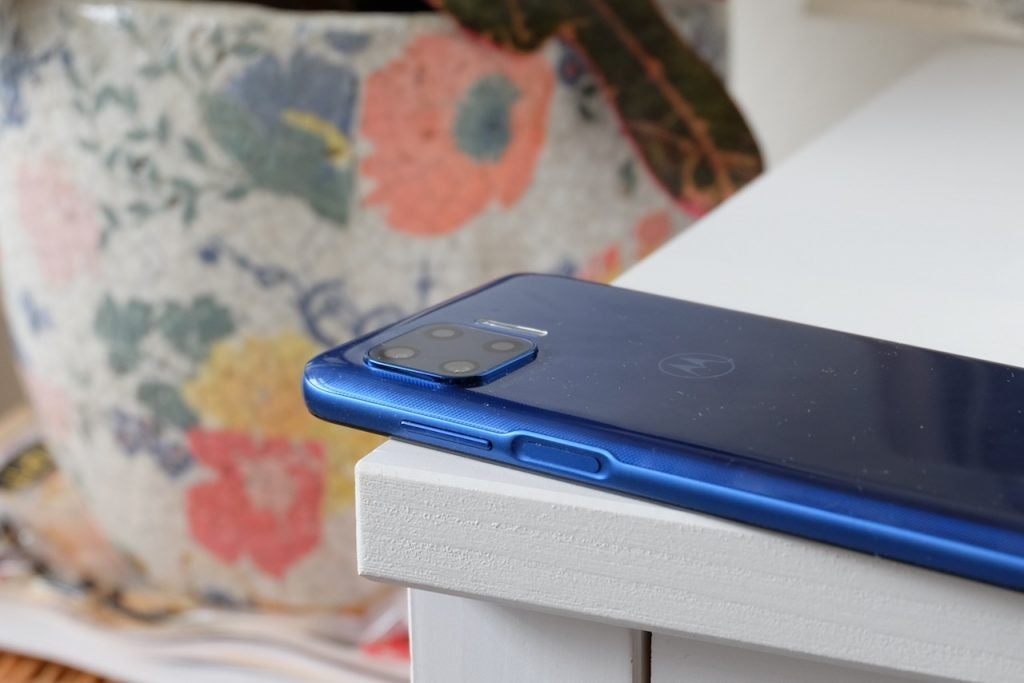 There are six cameras on the Moto G 5G Plus. Four clustered inside a square housing on the back and two on the front.

The two front cameras are really nice as the secondary 8-megapixel is ultra wide lets you cram more faces into selfies without holding your phone further out.

On the back, the four cameras consist of a 48-megapixel main sensor capable of 4K video, an 8MP ultra wide, 5MP macro and 2MP depth. The three ‘secondary’ cameras are all average, but that’s pretty standard on a phone this price. 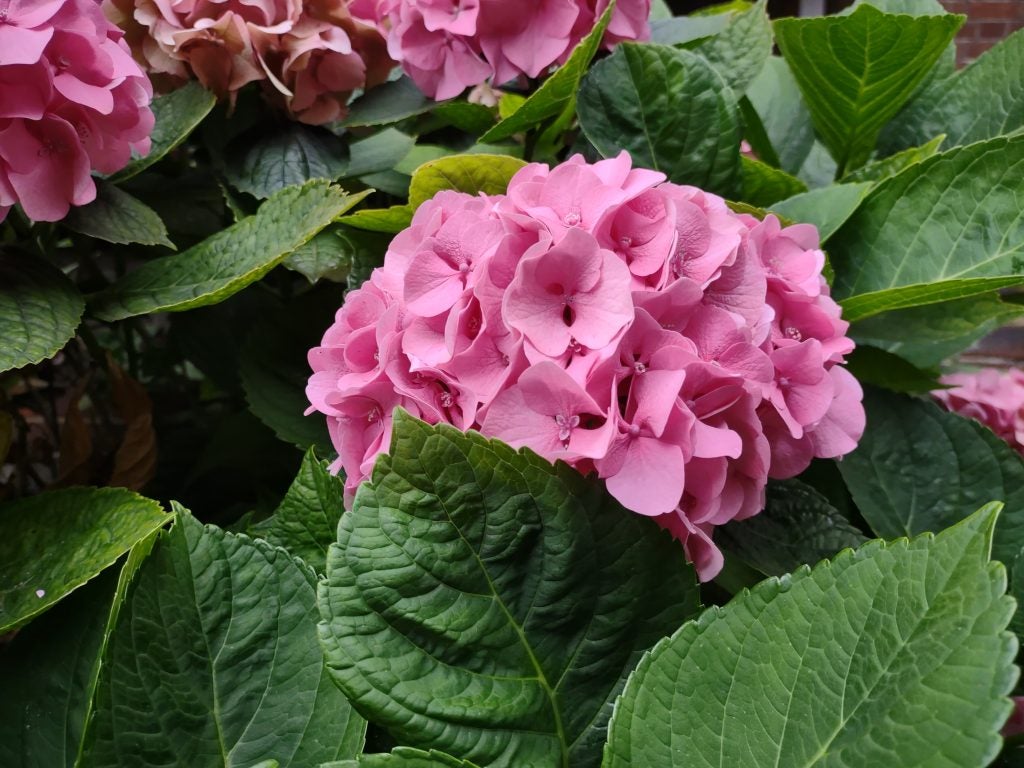 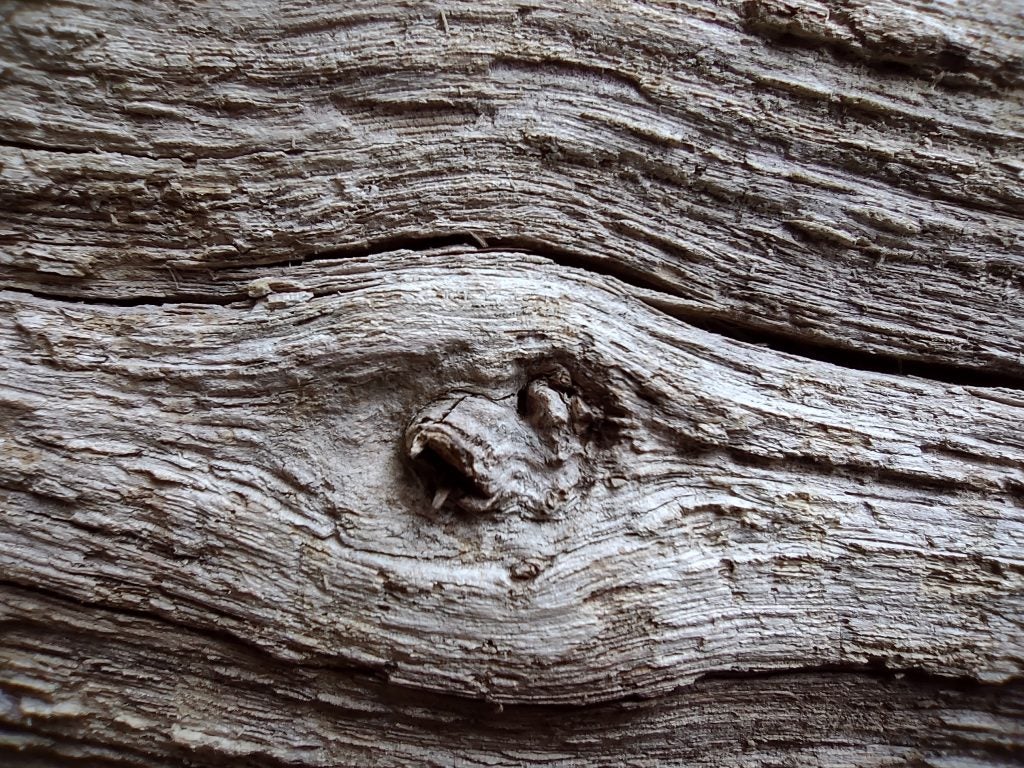 The macro camera lets you get up close, but it lacks punch 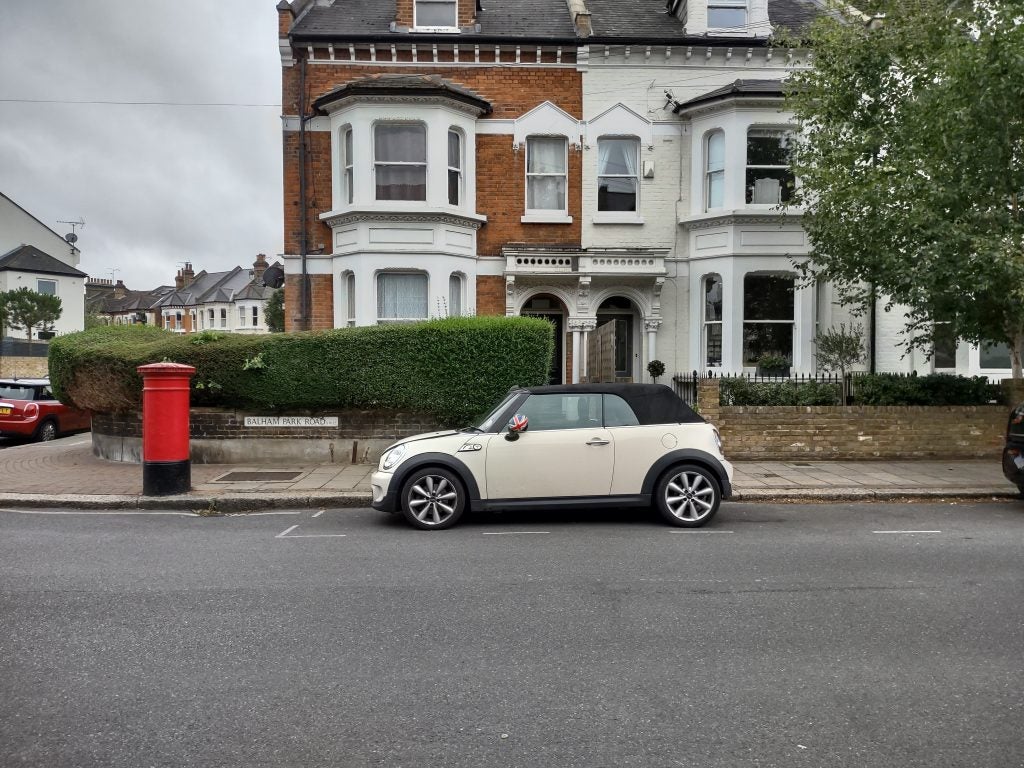 The HDR effect can lead to overexposed shots

Images are soft in various lighting and the macro is nothing more than a gimmick addition you’ll forget is there.

I guess you’re not really losing anything by having them around and the ultra wide does do its job by giving you a wider view. Even if the results are just never great. 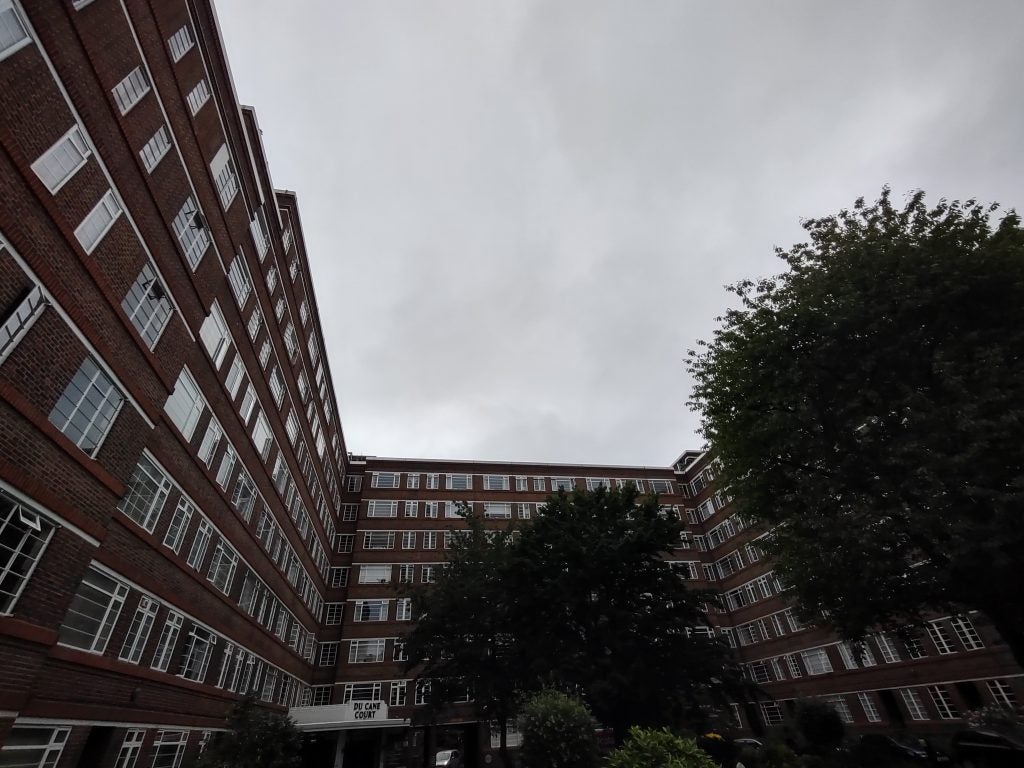 Pictures from the ultra wide aren’t the best

The main 48MP sensor with its f/1.7 lens, on the other hand, is pretty good. It shoots by default at 12-megapixels, combining four pixels into one to give the impression they’re larger, and it produces sharp snaps with pleasing colours. There’s a passable low-light shooting mode that extracts an extra hit of brightness and some AI tricks to boost colours. Pictures aren’t going to compete with those taken on the iPhone SE 2 or Google Pixel 3a, yet they’re colourful enough and the focus is very quick – much more so than with previous Moto Gs. 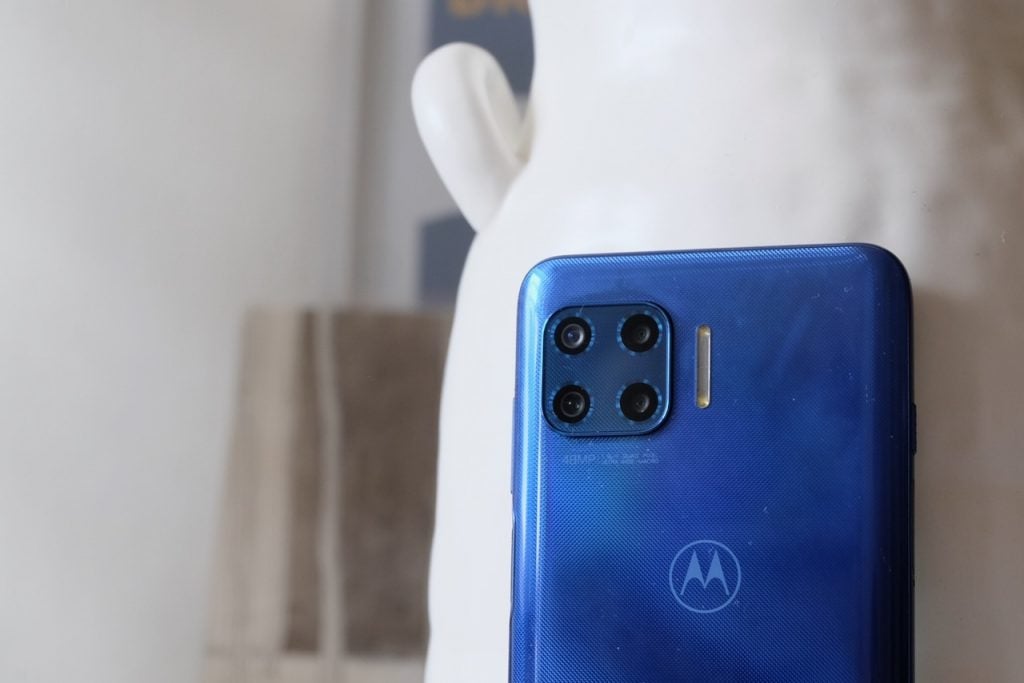 The Moto G 5G Plus continues its impressive run with the battery life. Even with the 90Hz display enabled all the time and brightness pushed up to combat harsh reflectivity, I have easily been getting through the day with around 20% left when I go to plug in at bedtime. Use it a bit less and you’ll likely be able to push it through most of a second day too.

It’s a star when streaming video (an hour of Netflix ate through just 6%) and the 5000mAh battery can be charged fully in about 90 minutes thanks to 20w Turbo Power. There’s no wireless charging though, hardly a surprise.

Should you buy the Moto G 5G Plus?

There’s very little to criticise with the Moto G 5G Plus. Yes, I could say it’s a bit cheap feeling and speaker is a bit naff – but that seems very nitpicking considering what’s on offer.

For £299 (or £349 for the 6GB RAM version) you’re a getting an Android phone that easily matches those costing twice the price. Performance is great, the software clean and the screen bright and fast. It charges up quickly and lasts for ages and it even takes pretty good photos all things considered. The icing on the cake is 5G.