What does refresh rate mean, and how does it affect gaming? We explain 144Hz monitors and beyond, and why more hertz isn’t always better (but usually is).

For years, the refresh rate has been the go-to number for gamers when buying a monitor. But what exactly is refresh rate and how does it relate to other aspects of monitor technology, such as panel type and response time? Read on to find out.


What is refresh rate?

The refresh rate of a monitor is the speed (rate) at which the monitor’s image changes (refreshes). The faster the refresh rate, the more times the image can update every second and the smoother the image will look. This number of changes per second is measured in hertz (Hz).

The generally accepted level of refresh rate that leads to a satisfying image depends on the application. Cinemas run at just 24Hz, while the old TV standards of PAL and NTSC ran at 50Hz and 60Hz respectively. A typical PC monitor will have a refresh rate of 60Hz, but the latest gaming displays can reach all the way to 240Hz.

The pursuit of faster refresh rates is crucial for gaming, since it allows the screen to keep up with the rapid movements of a player. For instance, a modern mouse can report its position up to 1000 times a second, while modern PCs can run competitive games such as Counter-Strike: Global Offensive or Overwatch at hundreds of frames per second. Having a monitor that can keep up with all that can potentially give a gamer that crucial split-second advantage.

However, there are diminishing returns. For a long time 144Hz was the de facto standard gaming monitor refresh rate (because it’s 6 x 24Hz) but now we’re seeing 240Hz panels. We’re yet to review such ultra-fast panels, but early verdicts suggest that only the most competitive of gamers will gain an advantage. This compares to the leap from 60Hz to anything over 100Hz, which even fairly casual gamers will notice.

Moreover, once you’ve reached such a level of refresh rate, other factors become more noticeable when it comes to trying to get the most clear image. Factors such as response time and motion blur.

Response time is the time it takes for a pixel to change from one colour to another. Generally measured in milliseconds (ms), it’s directly related to refresh rate in that a monitor can only really refresh its image quickly if the pixels can respond quick enough. A 16ms response time translates to a theoretical maximum of a 60Hz refresh rate 1s/60 = 16.6ms.

Response time is the reason that gaming monitors still use TN LCD panels with poor viewing angles, when most other monitors and LCD screens in phones, tablets and laptops have moved onto better technologies such as IPS and VA. TN can respond as quickly as 1ms, whereas the fastest IPS screens are around 4ms and most are 8ms or longer.

Meanwhile, response time is the big advantage that OLED displays have over LCD panel, and is the reason that many of us are so excited about them eventually being cheap enough to replace LCDs in computer monitors. LCDs work by physically moving tiny crystals embedded in the surface of the screen, and so are relatively slow to respond. OLED displays, on the other hand, are purely electronic, making them several orders of magnitude faster – a typical OLED panel has a response time of just 0.01ms.

Something to keep in mind when looking at monitor response times is there isn’t an accepted standard of measurement. It’s generally measured by a figure called grey-to-grey time, which refers to the time it takes for a pixel to transition from grey to white and back again, rather than all the way from black to white to black, which takes longer. But there isn’t a hard and fast standard that defines this.

As such, you can sometimes end up with situations where the monitor may say it has a 4ms response time, for instance, but it can look far slower than that. Unfortunately, there’s no way to really test for this other than to read reviews by people that have actually used the displays.

One of the effects of having a slow refresh rate or response time is that an image can look blurred. This can happen for a couple of different reasons.

The first is due to response time. With a slow response time, pixels can take a while to fully transition from their previous state to their new one. This can result in there being a trailing, or ghost, image behind the new one. The slower the pixels take to respond, the longer the trail and the less clear your image.

This was a particular problem with the AOC C3583FQ, for instance. It has a fast 160Hz refresh rate that initially, at least, means the image responds quickly. However, the VA LCD panel’s slow response time meant that it had very long, distracting trails that made the display feel nowhere near as responsive as typical TN gaming panels.

The other type of motion blur is eye-tracking motion blur. This is where your brain can perceive an image to be blurry because your eyes naturally track the movement of an image on-screen, but because the image is actually static – even just for a fraction of a second – your eyes end up blurring the image as they pan across it.

You can test motion blur for yourself at Blur Busters

This can be reduced by having a faster refresh rate. However, of even more benefit is a technique known as black-frame insertion. This is where a completely blank image is inserted in between each frame, reducing the time it’s displayed for and masking the effect of your eyes tracking the movement. It effectively doubles the refresh rate, but without the need for any extra image information, which is why it works when watching fixed-refresh rate video on TVs too. 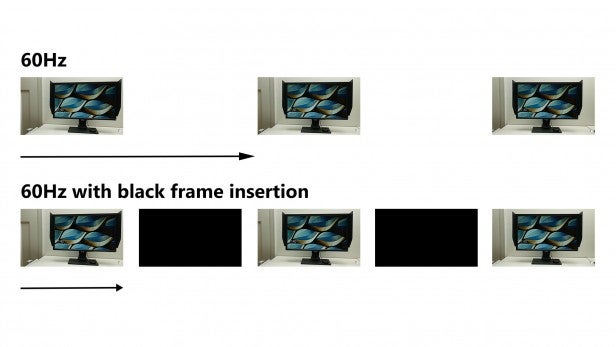 How this is achieved depends on the type of screen technology. OLED screens can just turn on and off, but with LCDs it is the backlight that’s turned on and off instead.

The interesting thing about this effect is that it can be just as effective on displays with fast response times. That’s because it’s to do with how long the image is displayed for, not how quickly it can change, which is why it’s still effective even on OLED displays that have super-fast response times.

That said, black-frame insertion does have a double advantage when it comes to LCDs, since it masks the ghosting effect of their slow response time.

So do you need a fast refresh rate?

So are fast refresh rate gaming monitors worth it? Absolutely. If you play fast-paced, competitive games, the responsive feel of a 100Hz+ monitor with a sub 4ms response time is undeniable and can bring a real competitive advantage.

Be honest with yourself, though. If you don’t actually play competitive multi-player games – particularly FPS – then you’re better off prioritising image quality over refresh rate and response time. Indeed, that’s why the likes of the  Asus PG279Q and Acer XF270HU have proved so popular: they strike the perfect compromise between all these factors.