Motorola has shown remarkable focus in creating a phone with the potential to go on for days on a single charge. The sacrifices made to achieve this goal in terms of form factor and display quality, however, should probably prompt most people to look elsewhere.

The Moto G9 Power, like all of Motorola’s previous Power phones, is named for a single outstanding attribute. And it’s got nothing to do with performance.

These phones have all had oodles of battery power on tap, and the Moto G9 Power is no different. In fact, it’s got more power in reserve than any Motorola phone before it.

Panning out a little, the cheap phone field has grown a lot more competitive in the past year or two, with a bunch of exciting new contenders challenging Motorola’s sub-£200 supremacy. Does the Moto G9 Power have enough stamina for this fight?

Motorola has mercifully ditched the glossy fingerprint-magnet design of the Moto G8 Power. Indeed, the Moto G9 Power might be even less concerned with turning heads than its predecessor.

This is a deeply practical phone design, with an overtly grippy, textured finish to its all-plastic body and a solid rear-mounted fingerprint sensor. It’s just as chunky as the G8 Power at 9.7mm thick, and a lot heavier at 221g (as compared to 197g).

There are two very good reasons for this extra size: a huge screen and a massive battery. But you should know that the Moto G9 Power is never more conspicuous than when it’s sat in your pocket – or as is more likely, when it’s sticking out slightly. 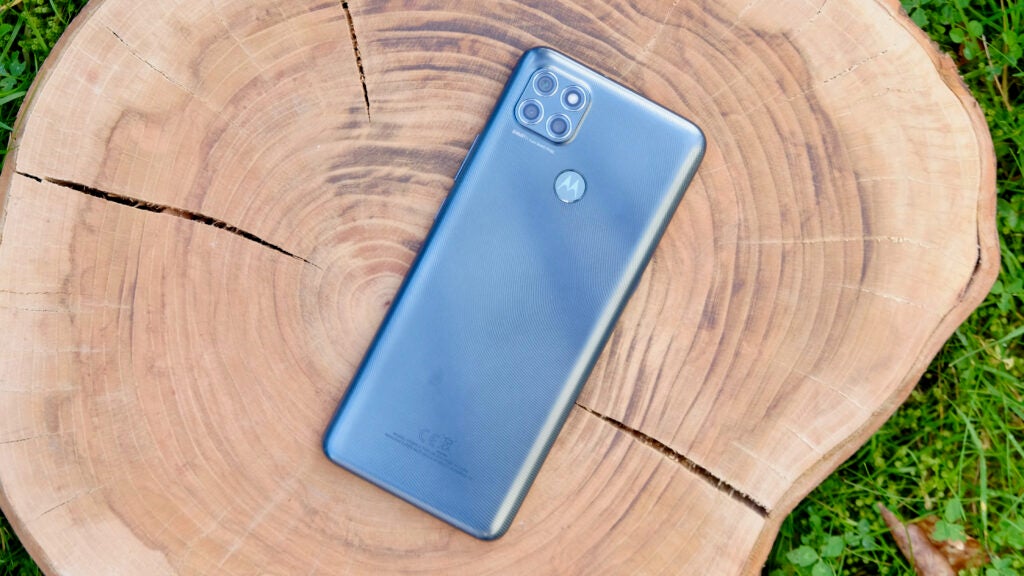 There’s no IP rating here, but Motorola does speak of a “water-repellent design” to give you some rain protection.

I’d back this robust-feeling phone to stand up to knocks and bumps quite well too, but its huge 6.8-inch screen (which is almost half an inch bigger than the Moto G8 Power) is as vulnerable as they come. I picked up an alarmingly large scratch right across the middle of the screen very early on in my time with the phone.

While I didn’t wrap it up in the bundled silicon case or add a screen protector, I’m one of those meticulous sorts who doesn’t ever let their phone share pocket space with hard objects, so the cause is a bit of a mystery. I suspect this is merely a matter of bad luck rather than an inherent screen weakness, but I thought I’d mention it nonetheless – if only to point out that Power and Force are not the same thing.

Far more of a concern is the quality of that huge screen. This is a 60Hz IPS LCD with muted colours and grey blacks, which isn’t a problem at this price point. But rolling back the resolution to a mere 720 x 1640 (HD+) after the FHD+ G8 Power most certainly is. 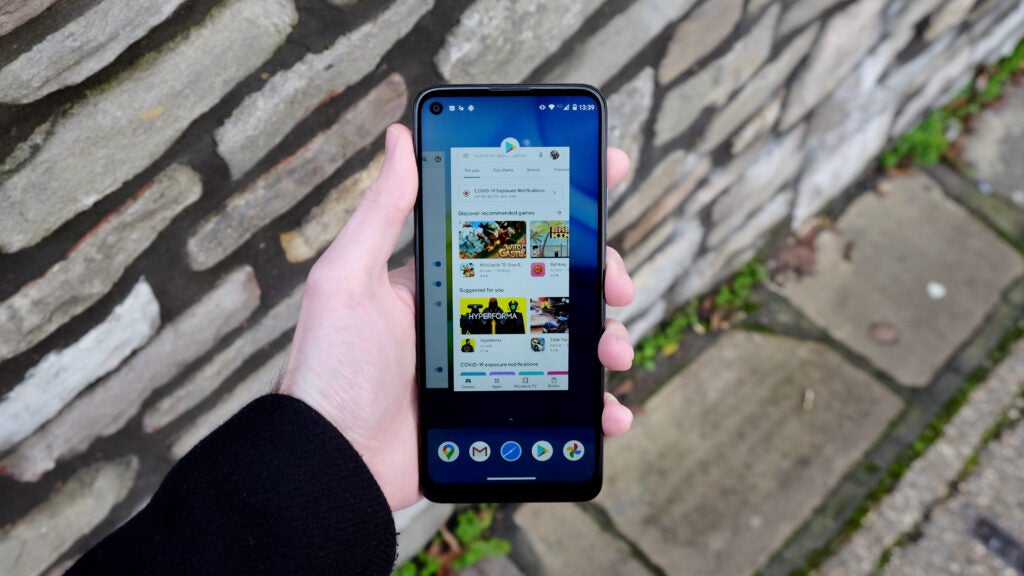 Giving you a much bigger yet much less defined canvass, resulting in a paltry 263ppi output, seems like an odd decision from Motorola. I get that the Moto G9 Power is all about prioritising battery life, but the cost to clarity is too much.

Full HD really isn’t too much to ask for in the sub-£200 category either. While the aforementioned Moto G8 Power cost £220 at launch, the Moto G8 Plus is still being sold for exactly the same price as the Moto G9 Power, and that has a Full HD display. Meanwhile, the Poco X3 NFC gives you FHD in addition to a 120Hz refresh rate for dead on £200.

Performance – The Moto G9 Power is fast enough for the price

The Moto G9 Power runs on Qualcomm’s Snapdragon 662 CPU, which is a very similar chip to the Snapdragon 665 packed into the Moto G8 Power. The Snapdragon 665 is technically the superior of the two, though the 662 is much newer, and both have their relative strengths and weaknesses.

We’re looking at rough parity between the two generations, with an average Geekbench 5 score of 309 single-core and 1379 multi-core. The Moto G8 Power scored 312 and 1361 respectively.

Like its predecessor, the Moto G9 Power packs 4GB of RAM. That’s just about the minimum spec for running Android well these days, so we can’t really have any complaints for the price.

All of this, together with that fuzzy display and a single speaker, means that the Moto G9 Power really isn’t well suited to gaming. It’ll run PUBG no higher than Balanced/Medium frame rate, which is just one notch off the lowest rung. It doesn’t look good.

Again, it’s worth pointing out what the Poco X3 NFC offers for £20 more. The phone’s Snapdragon 732G CPU is much better suited to gaming, and you also get the benefits of stereo speakers and a 1080p 120Hz display.

The G9 Power lays on 128GB of internal storage, which is a strong provision, if hardly unique for the money. You can expand that amount via a microSD slot too. 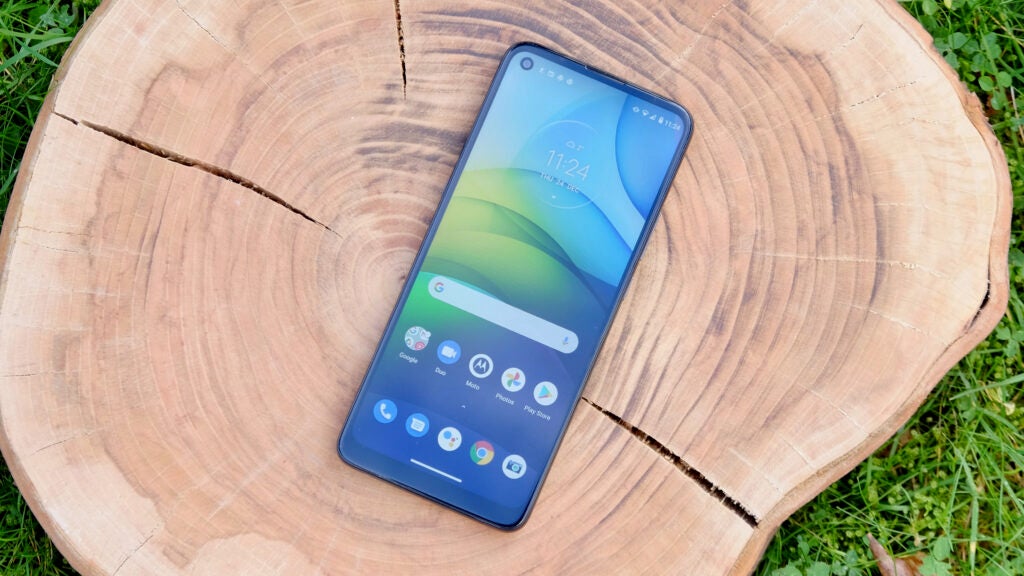 Camera – How good is the Moto G9 Power’s camera?

Motorola has ostensibly equipped the Moto G9 Power with a triple camera, but it isn’t really. The only genuine camera here is a 64MP wide sensor, with no telephoto or ultrawide lenses to back it up as there was in the Moto G8 Power.

Supplemental sensors are often terrible in cheap phones, but last year’s effort did a decent job in providing a flexible budget shooting experience. What’s more, Motorola has fitted the G9 Power out with a way less useful 2MP Macro Vision camera instead.

Once again you get a 2MP depth sensor for aiding with those blurry-background portrait shots. It’s fine at what it does, but it hardly earns its billing as a separate camera.

The main focus is that 64MP main snapper, and the good news is it’s pretty good for the price. It turns out 16MP shots via a pixel binning technique, which uses the spare pixels to improve clarity.

While the shooting experience can feel a little sluggish, the results are largely crisp and well balanced. Auto HDR does a good job at reining in extremes of light and shade without looking weird, even if it can rob certain scenes of depth and drama. Here is a few samples. 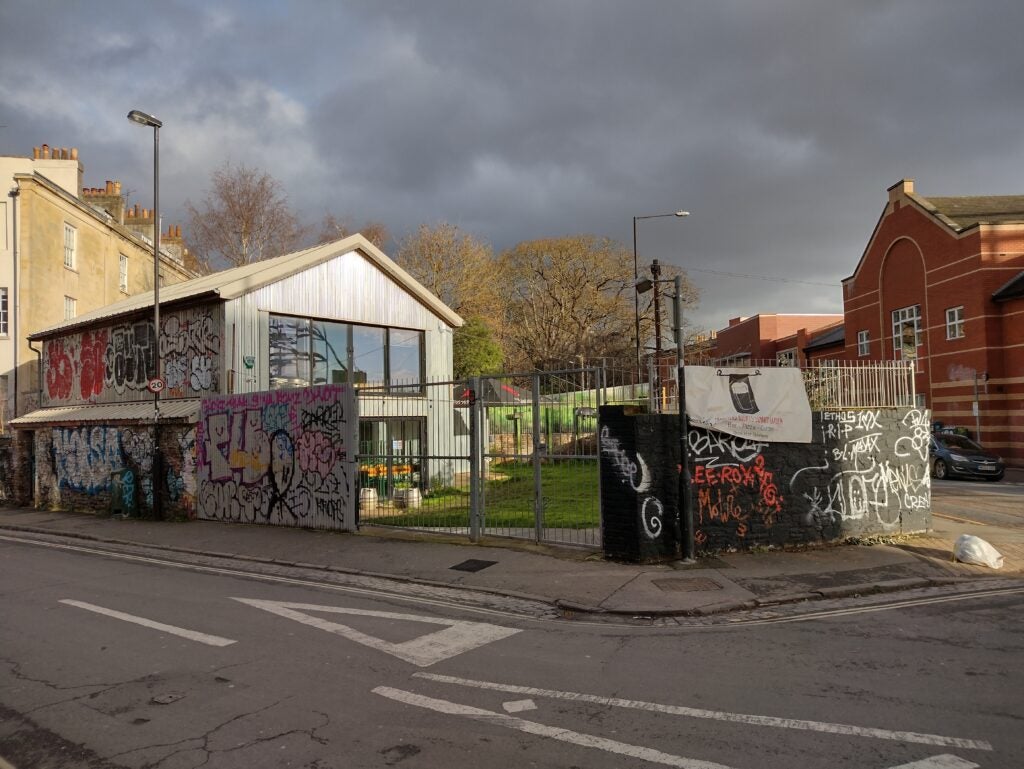 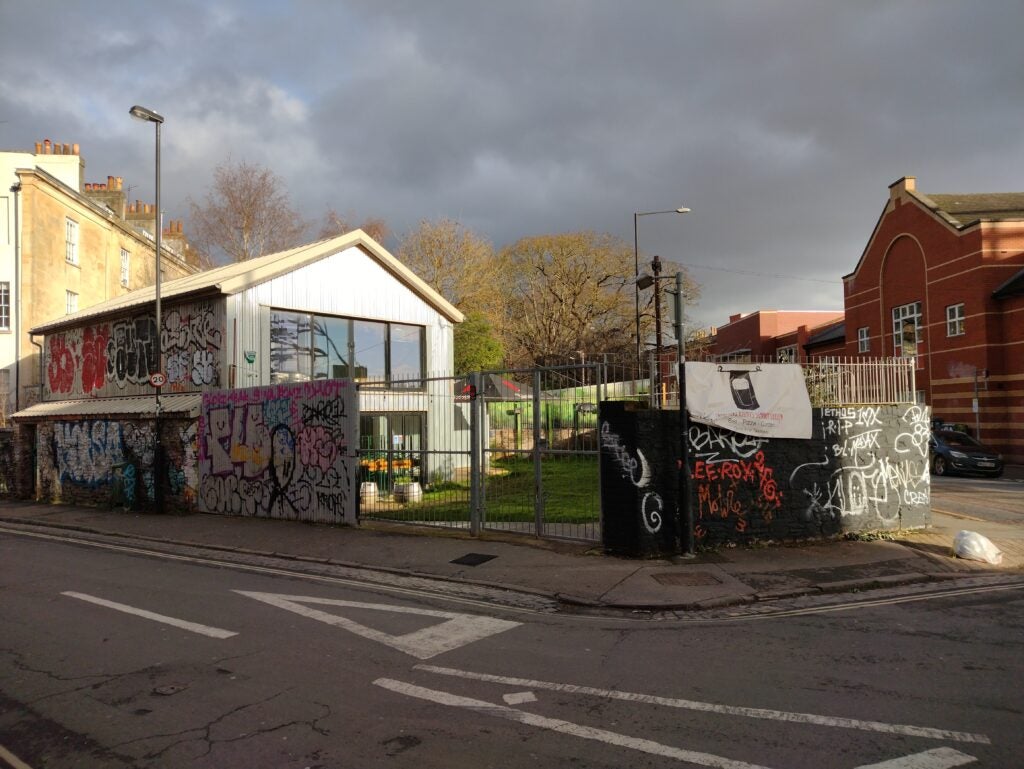 I did manage to catch the autofocus napping on the odd occasion with a quick snapshot, which I only realised when I checked back on my computer – another mark against that 720p display. But generally speaking, the Moto G9 Power camera holds its own in good light.

It also has a Night Vision mode. Check out the two shots of the dark passageway with Night Vision turned on and off. Night Vision draws out the detail in the cellar ceiling and balances out the light sources much better, even if it does all still look a little fuzzy. 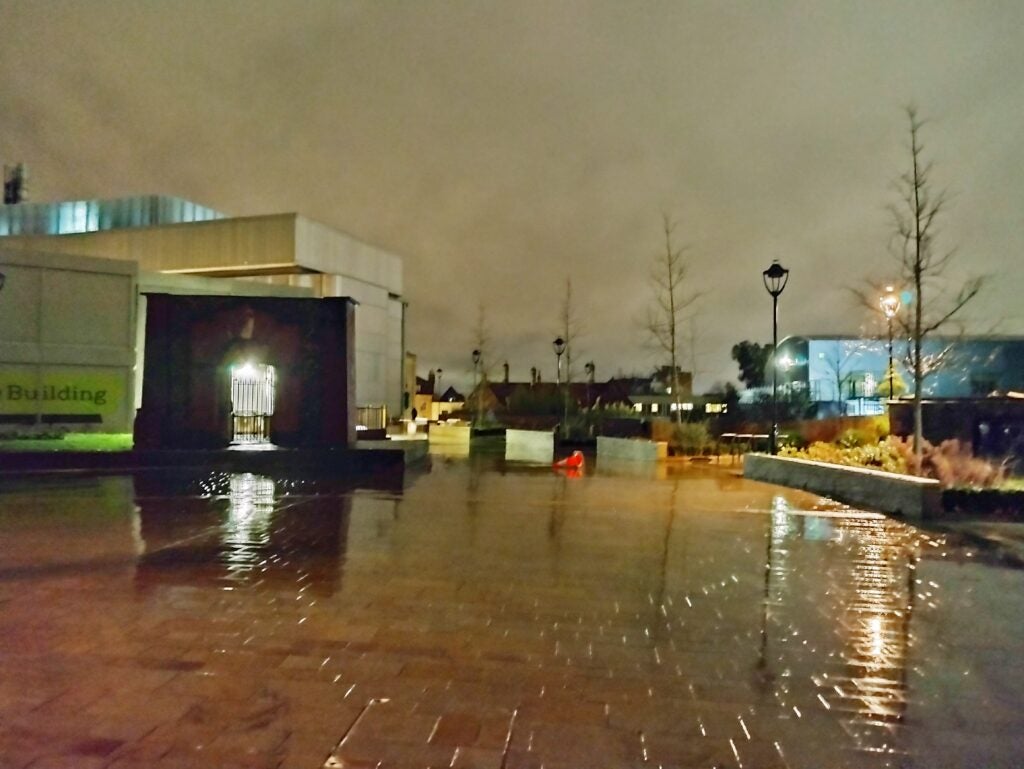 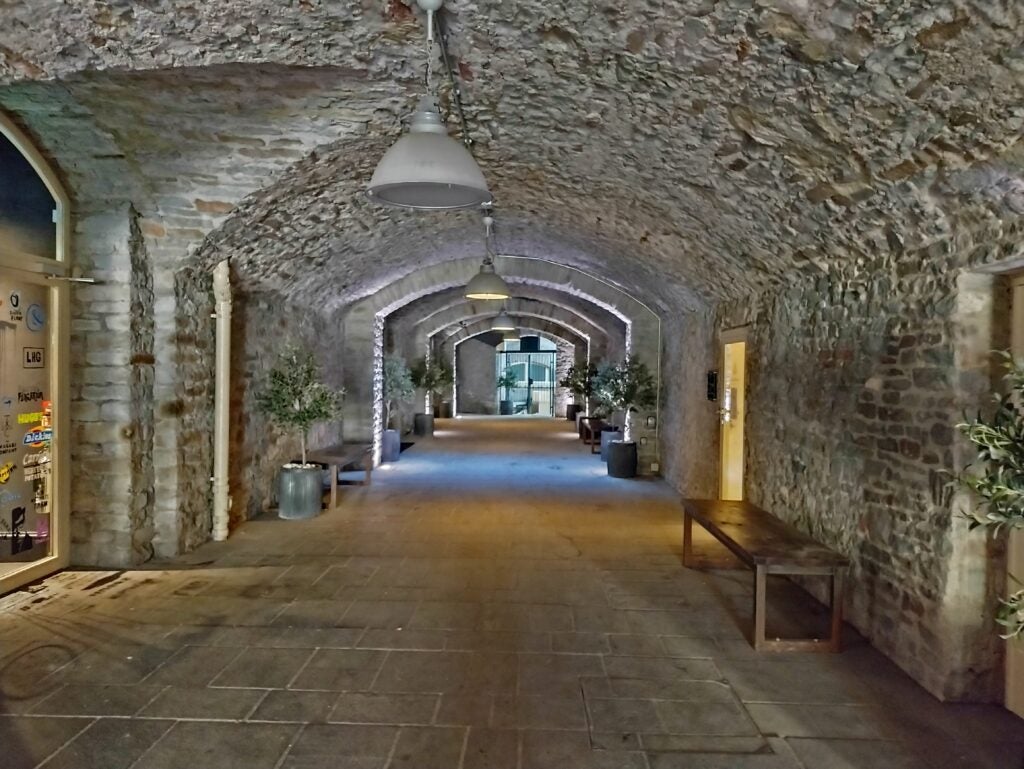 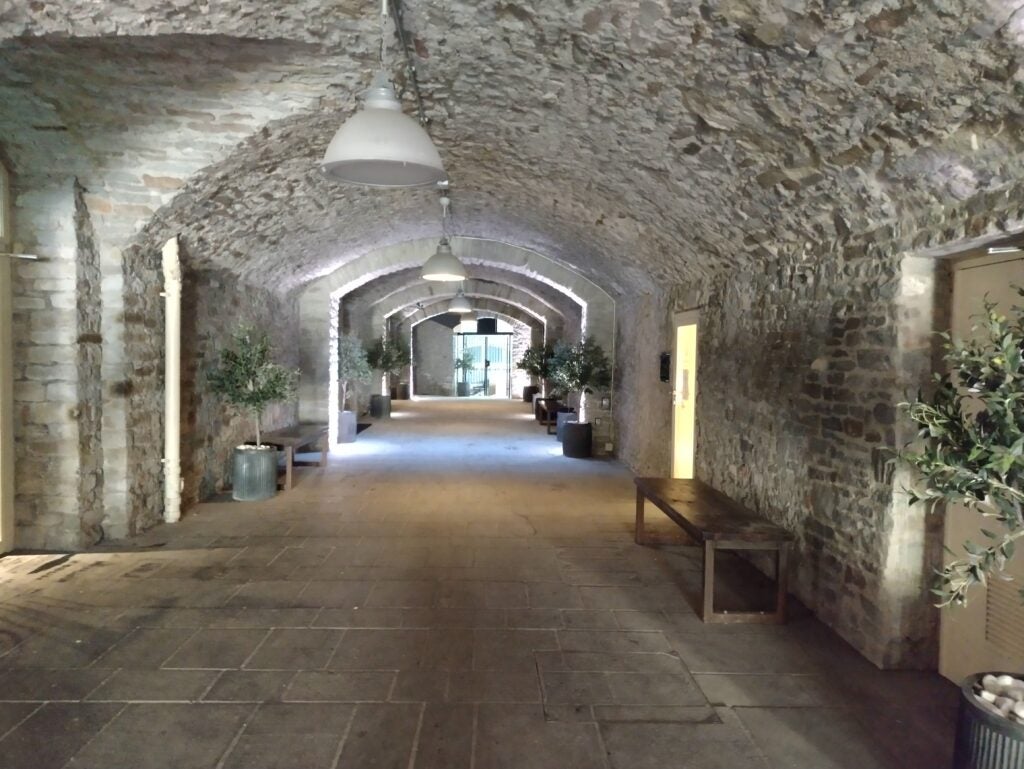 In true night time conditions, however, Night Vision isn’t much cop. Sure, it brightens things up significantly, but everything looks blurry and indistinct, like the phone is unable to compensate for natural hand movements. Which, given that there’s no OIS, is probably the case. Even when you do manage to keep your hands nice and still, a huge amount of noise invades night time scenes.

There’s also a 16MP selfie camera, as before, which turns out pretty sharp results as these things go. 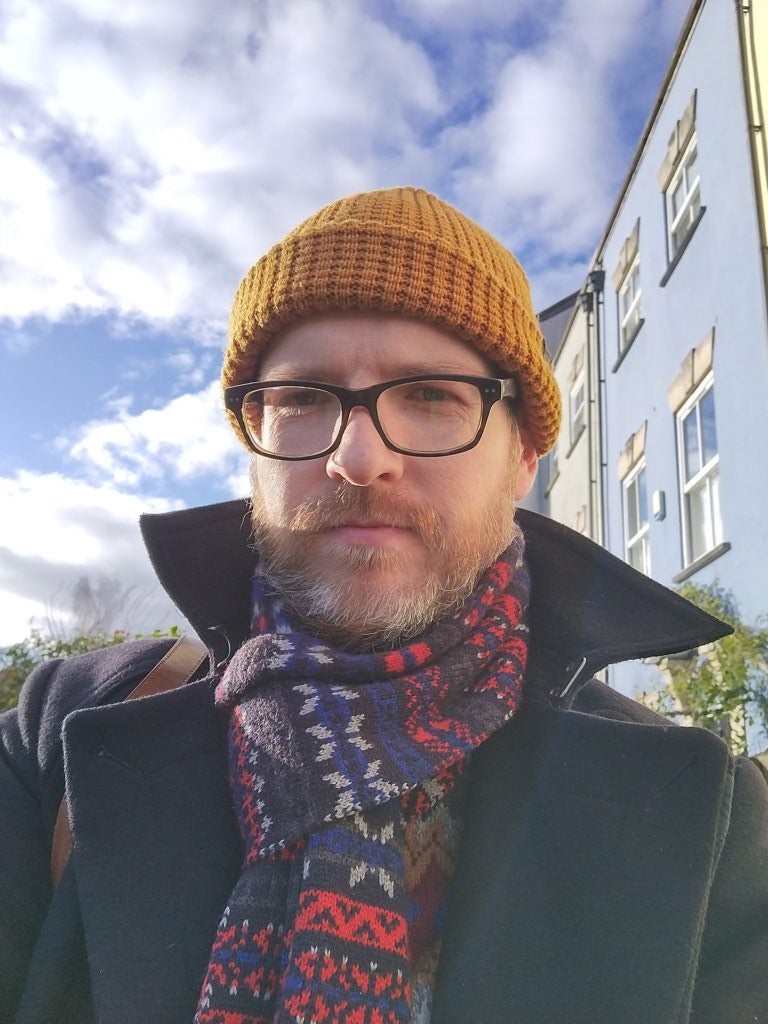 One area in which the Moto G9 Power’s camera is notably inferior to the Moto G8 Power’s is with video capture. Thanks to the use of the Snapdragon 662, it can only manage 1080p/30fps video capture, whereas its predecessor could hit 4K/30fps and 1080p/60fps.

Android 10 comes as standard on the Moto G9 Power, and while phones are moving onto Android 11 by now, that’s not unusual in the budget sphere.

This is a Motorola phone, so you’re looking at as light a custom skin as you’ll find in all of Android. If you like your Google software stock, this is as good as it comes outside of the Pixel 4a or an Android One device.

Motorola makes sparing, judicious tweaks here and there, many of which are accumulated in the classy Moto app. Here you can learn about Moto Gesture, which lets you do things like activate the torch with two chop motions, or twist twice to open the camera app. 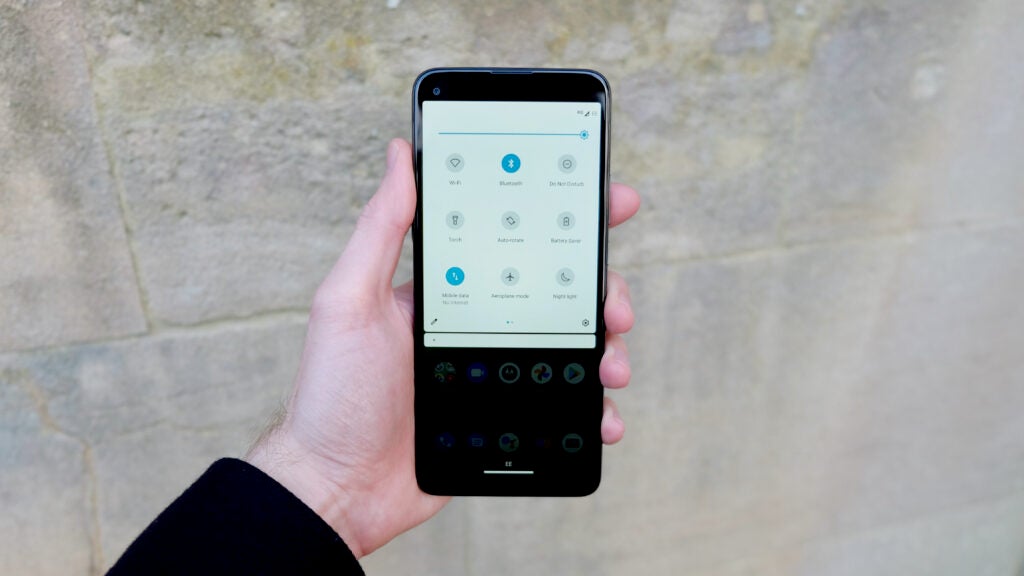 Add custom styles and wallpapers function, and that’s pretty much your lot. Everything else is distinctly Googley, with all the main G-apps handling core functions like image gallery, web browser, calls and messaging.

I’d take Motorola’s light approach to software over the heavy custom UIs of its rivals (including the Poco X3 NFC) any day of the week.

All of the Moto G9 Power’s quirks and foibles exist to facilitate one thing: a flipping huge battery.

At 6000 mAh, this is Motorola’s biggest battery ever, and certainly the biggest I’ve ever seen in a phone. The Moto G8 Power, by contrast, weighed in with a relatively wimpy 5000 mAh cell.

Motorola claims 60 hours of battery life, which to give some perspective is 50% more than the Moto G8 Plus by the company’s own reckoning. Having put the phone through its paces, I’m not remotely inclined to disagree.

A PC Mark battery benchmark score of 25hr 44min is around double that of rivals like the Poco X3 NFC. It’s not far off three times better than the likes of the Realme 7.

Such phones have smaller batteries, of course, but also smaller, higher resolution, and higher refresh rate displays. This right here is the pay off for having such an underwhelming screen in the G9 Power.

Sustained media playback levels the playing field somewhat. An hour of Netflix streaming with the screen brightness set to full sapped 7% of a full charge. That’s still good for a budget phone running on a humble processor, but it’s not spectacular.

For those who value stamina way more than media experience, or who are routinely away from a power point for three days at a time, the Moto G9 is near the top of a relatively short list of options.

It comes bundled with Motorola’s 20W TurboPower 20 fast charger, which I found was able to get from 16% to 99% in two hours. 15 minutes will generally get you a 13% increase, right up until the final stretch when the charging rate invariably slows down.

That’s not massively fast, but do remember the sheer size of that battery. There’s a lot more battery to fill here, so the G9 Power’s recharging numbers look pretty good in context. 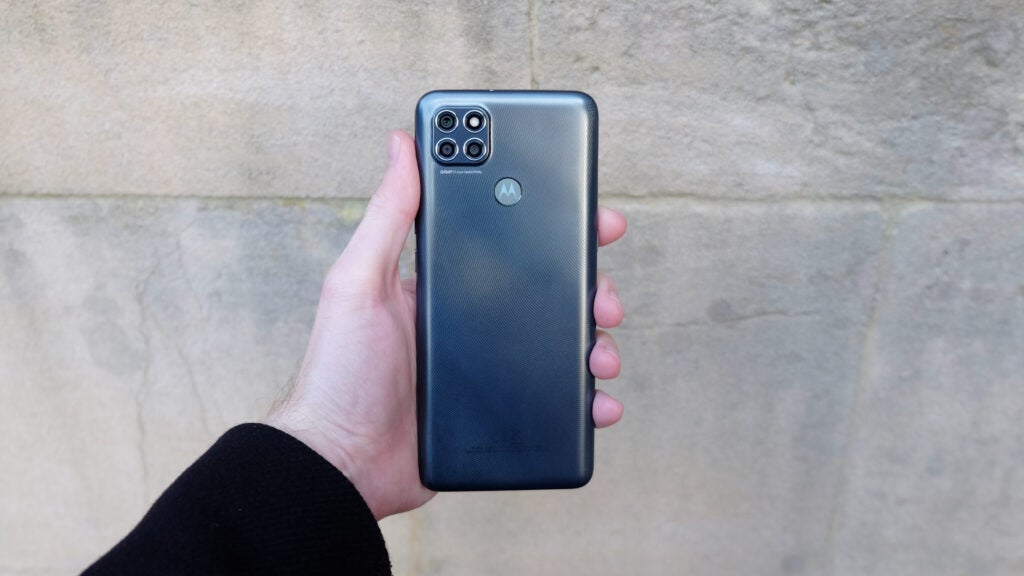 Should you buy the Moto G9 Power?

The Moto G9 Power is even more of a specialist tool than previous models in the range, for better and for worse.

On the positive side, its battery is bigger and lasts longer than ever before. If you have to have a phone that will last you through several days in between charges, and you only have £200 to spend on it, then the Moto G9 Power strains every sinew to make that possible.

However, this blinkered focus on extending stamina has left the Moto G9 Power bigger and heavier than before, and with modest performance and a poor screen that doesn’t do media content any favours whatsoever.

With accomplished rivals like the Poco X3 NFC supplying an all round superior experience for similar money, the Moto G9 Power finds itself the master of an extremely small niche.