The Razer Kishi smartphone controller is the best peripheral around for early adopters of cloud gaming services like Google Stadia, GeForce Now and Xbox Game Pass

The Razer Kishi is the latest lump of plastic claiming it’ll turn your smartphone into a Nintendo Switch-like mobile gaming station.

If this sounds familiar, it should. Asus started the trend when it released a similar peripheral and dock for the first generation ROG Phone a few years ago. Razer and Xiaomi Black Shark jumped on the bandwagon a few months later and have since released numerous similar docks for their respective “gaming phones”.

In the past the peripherals have failed to have much impact for one key reason: Android games aren’t that complex and generally don’t merit having a fully fledged controller.

But over the last year that’s gradually changed for a couple of reasons. First, because some more hardcore games like PUBG and CoD Mobile have started getting serious followings. Second, the arrival of top notch triple-A streaming services like GeForce Now have suddenly made console and PC titles available to play via a smartphone.

The combination of factors mean that for the first time in smartphone history, there may be an actual user case for a peripheral like the Kishi, at least on paper. I mean, how cool would it be to be to play the full-fat PC version of Destiny 2 on the go with a Switch-style setup over the cloud?

And while the Kishi gets a lot right, and is perfect for early streaming service adopters, niggling issues with its setup and streaming services, mean it’ll likely be remembered as the precursor, not instigator of the mobile gaming revolution tech companies keep banging on about. 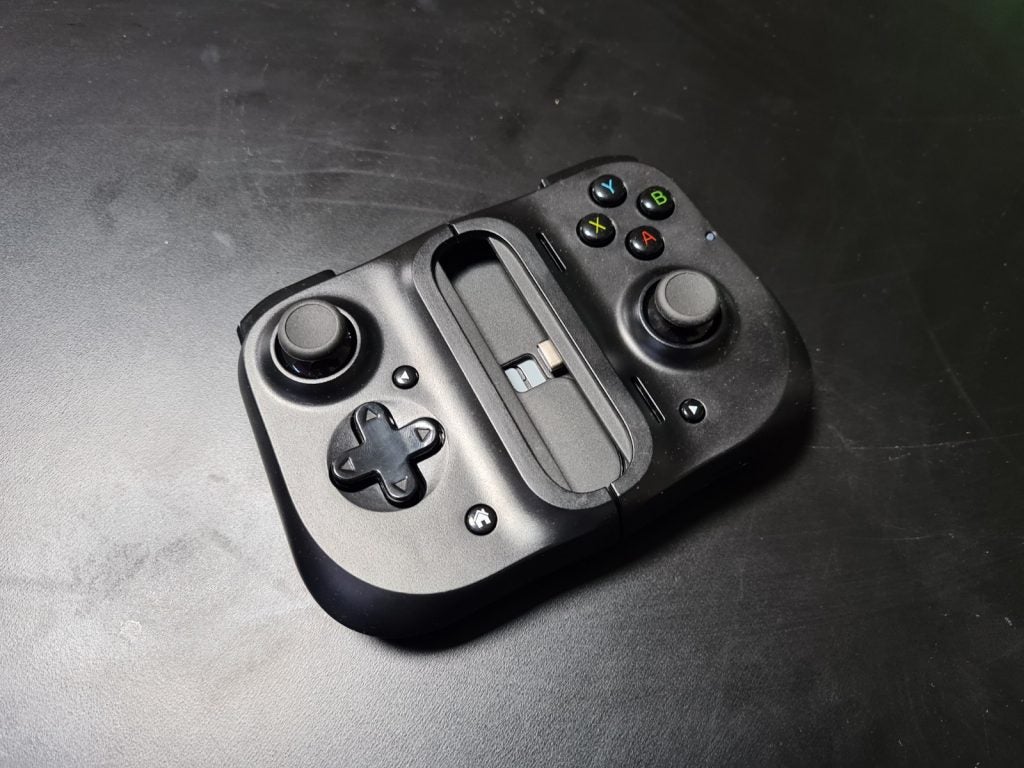 It’s a slab of black plastic with physical thumbsticks, a D-pad and an equivalent button and trigger layout to a traditional Xbox controller. However, up close there are a few crucial differences. For starters it uses an elastic docking system.

To connect the phone, you pop two switches on the Kishi’s back to free the controllers. You then connect your handset using a USB C connector in the right-hand dock and stretch the other dock over the phone’s left side. This lets the Kishi work with significantly more phones than the Junglecat, which uses physical cases to house phones and Bluetooth to connect the controller.

I was initially concerned this would lead to a loose fit, but the system worked equally well with the numerous handsets. During testing I was able to get a solid fit with the Razer Phone 2, Galaxy S20 Plus, Black Shark 3 and OnePlus 7T Pro.

You’ll also notice the thumbstick layout has been switched to mirror a traditional Xbox controller with the left input being on the peripherals top side and the right on the bottom.The device has also been upgraded to feature a USB-C passthrough charging port, which makes topping up the phone’s battery quick and easy during prolonged gaming sessions.

Overall, the design adds up to be a nice package. The fact it folds down when a phone isn’t docked makes the Kishi suitably portable and it’s light enough to carry around and hold for extended periods.

Build quality is a little mixed, however. The sticks are well built and have a pleasing click when pushed. They’re also around the same height as a regular Xbox controller, which makes them nice and easy to use. The front facing X,Y,B,A buttons are more than good enough to be used comfortably, though they have a slightly spongy feel and lower actuation point than the inputs you’ll find on most first-party pads. The shoulder and trigger buttons tell a similar story, but are still comfortably good enough for most games – you’ll only struggle during particularly heated player-vs-player online sessions.

The biggest downside is that every part of the Kishi feels plasticky and, being brutally honest, isn’t quite as rugged as I’d like. If you’re planning to give this to a kid, or short-tempered gamer, be warned that the Kishi will not survive any rage throws. 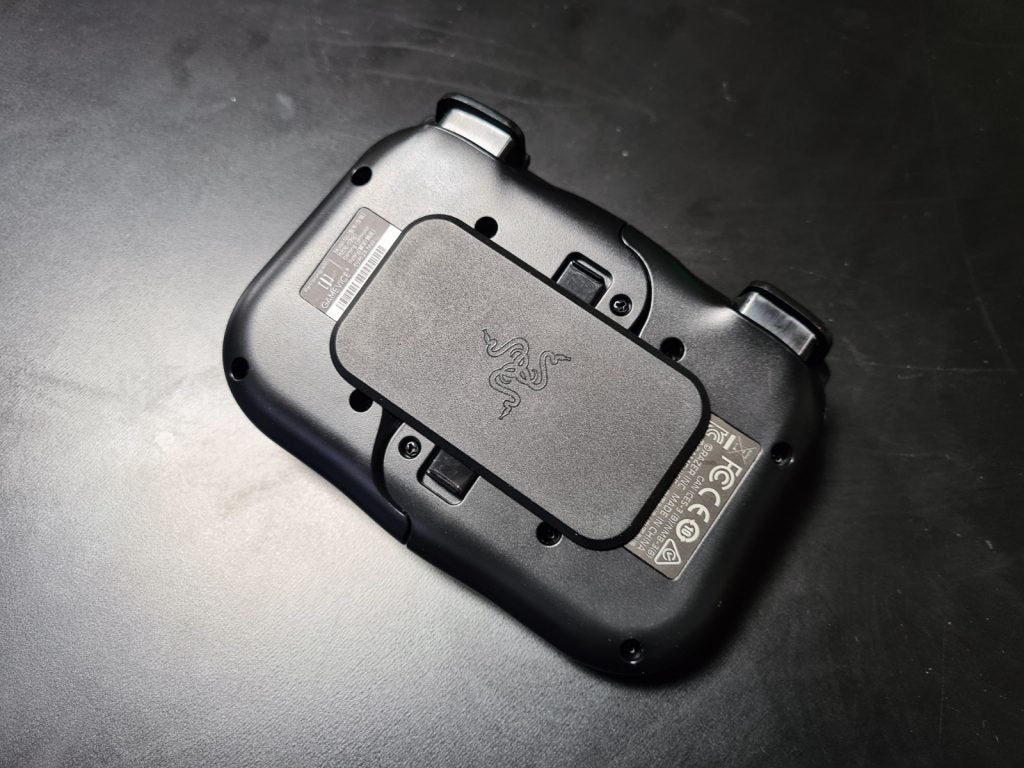 The bigger question is how the Razer Kishi performs while gaming. The Junglecat’s use of Bluetooth meant it would occasionally suffer from latency, particularly when being used in busy signal areas like train and underground stations.

The Kishi’s use of a physical, USB-C docking system removes this issue. During testing, I’ve not suffered any noticeable latency when playing locally. The only time I noticed any delays was when cloud gaming on GeForce Now, though this was due to the stream, not controller.

Playing locally, the Kishi mobile app (Android) works great. The app makes it quick and easy to update the peripherals firmware and shows which games are compatible. There’s also an option to create custom profiles for games as needed, which is a particular Godsend for competitive shooters like PUBG and CoD Mobile where accuracy is key.

The only minor issue I’ve noticed when playing locally is that Kishi can on occasion make some games crash. This was a particular problem on titles like Star Wars Knights of the Old Republic and Grand Theft Auto 3, which never made it past their opening menu screens.

Things get interesting when using the Kishi with streaming services like GeForce Now, Stadia and Project xCloud. For those out of the know, these products are part of a very young market that lets you stream the full-fat version of PC games to your mobile device. The Kishi is bespoke designed to act like an Xbox controller when doing this and is being marketed as the ultimate option for early adopters of the new streaming services.

Performance here is generally excellent. Using the Kishi with handsets from OnePlus, Samsung, Razer and Xiaomi the peripheral worked a treat for the most part. In most instances, the streaming service immediately recognised it as an Xbox controller the moment I connected the Kishi.

However, there are a few issues. When testing the Kishi on the Galaxy S20 Plus, bugs crept in and GeForce Now refused to recognise the D Pad. Razer told me it has managed to replicate the bug and is working with Nvidia to come up with a patch fix. Because of the lockdown I haven’t been able to see if the issue occurs on other Samsung handsets, but it was an annoyance nonetheless.

The services are also still very young and require a fairly fast network connection. This means they struggle to run when not on a super-fast 5G connection or local Wi-Fi, which diminishes the Kishi’s value and usefulness. 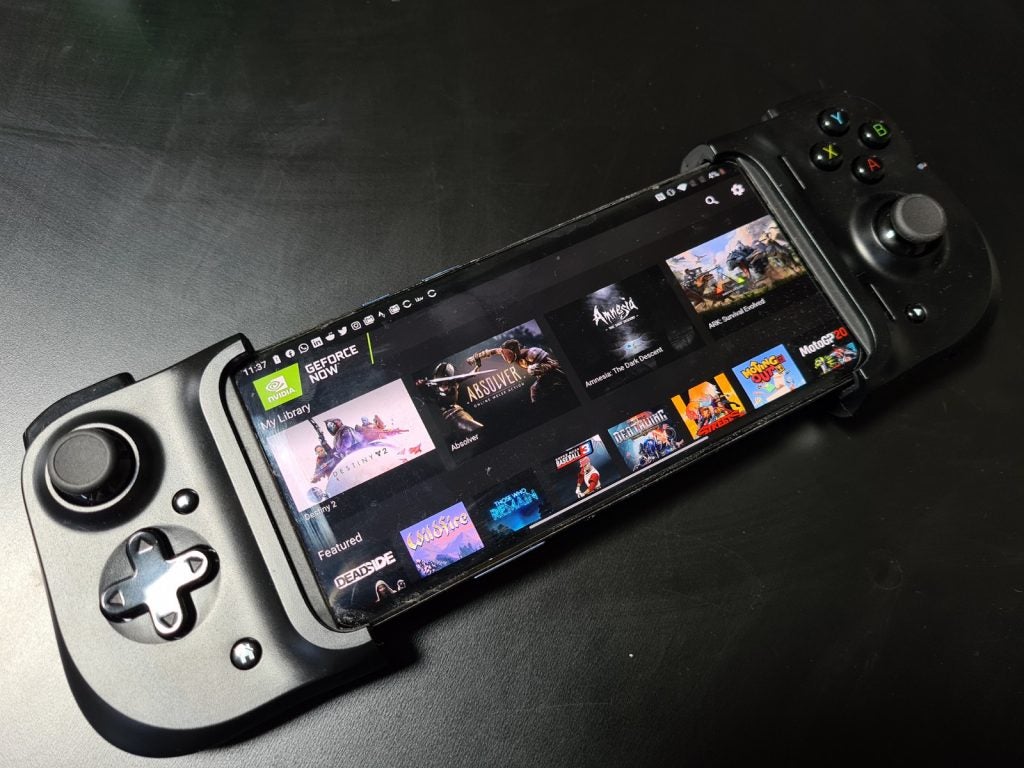 Should you buy the Razer Kisihi?

If you’re an early adopter that’s already using a service like GeForce Now, then the Kishi is a great addition to your  smartphone gaming setup.

It’s not as solidly built as I’d expect from a peripheral costing £79.99, but it makes up for this by offering superb multi-device functionality and a wonderfully easy setup process. If you just want to play Android games, its high up-front cost and tendency to crash games make it a hard sell, however.