The 4a 5G is a mash-up of both the 4a and Pixel 5 and in many ways that makes it the hardest to recommend. It lacks some of the more ‘flagship’ features of the higher-end model and is missing the downright affordable price tag of the 4a.

The Google Pixel 4a 5G makes one thing clear the moment you take it out of the box: this is a phone that’s far closer to the Pixel 5 than the 4a, to the point it should probably be called the Pixel 5 Lite, and that’s certainly no bad thing.

This mid-priced device is the hardest of Google’s 2020 phone line-up to categorise. It packs the same dual camera and 5G-enabled chipset as the £599 Pixel 5, however it misses out on features like a 90hz display, metal frame, wireless charging and IP rating.

If those things are worth £100 to you (or $200) you’re probably better off with Google’s flagship. If they’re not, then the 4a 5G might be the phone for you.

As there’s no XL Pixel this year, the Pixel 4a 5G acts as the largest member of the Google phone family. Though only just. Here you’ve got a 6.2-inch display, whereas the regular 4a sports a 5.8-inch panel and the Pixel 5 comes in at 6-inches.

That 0.2-inches might not seem much, but the screen is notably bigger and the phone feels larger due to its thicker bezels.

Like the other Pixels, the screen is good. It’s an FHD+ OLED panel, with plenty of brightness, great colours and a small cutout in the corner for the front camera. It has HDR support too, which brings an extra pop to supported content.

What it is lacking though is a 90Hz refresh rate, which is a common feature now found at this price on Android phones from the likes of OnePlus, Motorola and Realme. A faster refresh rate (usually upping the standard 60Hz to 90Hz or 120Hz) gives you smoother scrolling and it’s a feature that’s hard to ditch once you’ve spent some time with it. 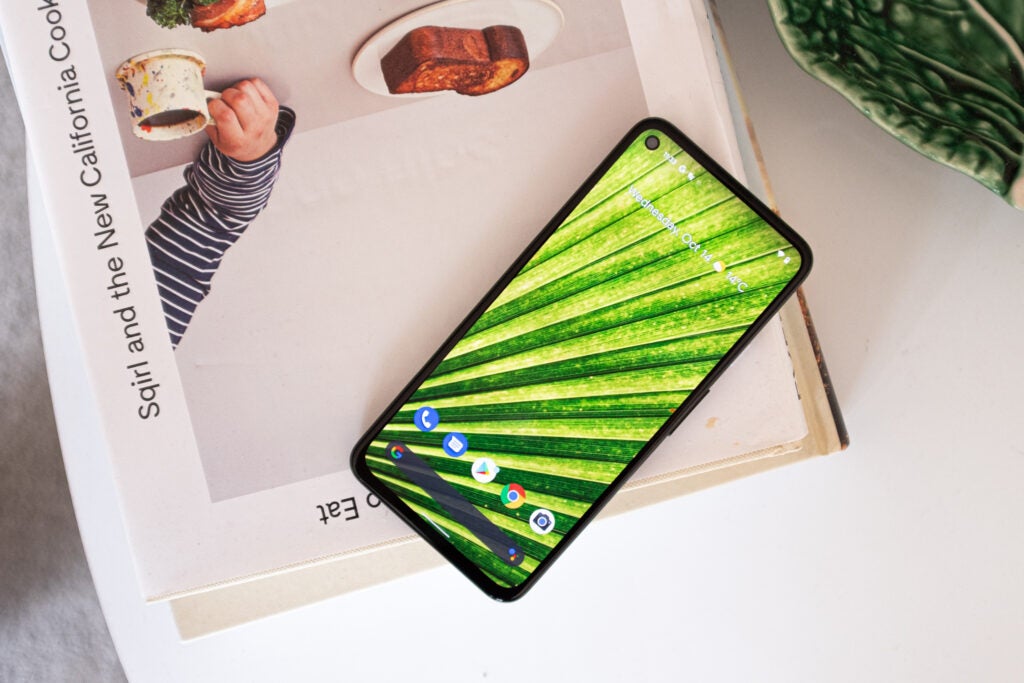 Having spent time with the Pixel 5 and its metal-clad body, the Pixel 4a 5G feels more plasticky and a lot more hollow in comparison. Still, it’s light and pocketable with a durable finish and a nice pop of colour on the power button.

Some other colours would be nice (there’s a black or white option in the USA, us Brits only get black) and there’s no denying the overall look is a little bland, but it still works in a simple sort of way.

You’ve got 3.5mm headphone port on the top, USB-C on the bottom and decent speakers that pump out loud audio.

Performance – More Pixel 5 than 4a

As the name suggests, this is a 5G phone – a feature not available on the cheaper Pixel 4a. It’s the cheapest Pixel with this next-gen connectivity tech and works as expected as long as you have a 5G SIM, contracts and are in a 5G area.

5G is certainly being touted heavily by networks, but I doubt many will notice the benefits yet – aside from higher numbers if you’re running speed tests. There’s a slightly pricier version available in the States with the ultra wideband mmWave form of 5G (this is faster, but contained into very small areas) however as that tech isn’t available in the UK we don’t require this version.

Powering the phone is the very capable Snapdragon 765G chipset, 6GB RAM (you get 8GB on the Pixel 5) and 128GB storage. You might not get true ‘flagship’ performance, but realistically for most people there’s enough grunt here to handle anything you throw at it.

It handled every game I threw at it with ease and never lagged in general day-to-day use. If you’ve got a faster 8-series and open up apps at the same time then yes, the faster chip will nudge ahead. But for the price  you’re getting very good performance, and it isn’t bogged down by too many preinstalled apps. The deal is sweetened even more by the promise of multiple years of updates, something often missing from similarly-priced devices.

Like the chipset, the two rear cameras and the front selfie camera are the same across the Pixel 5 and Pixel 4a 5G. That’s great, because the Pixel 5 camera is excellent – as you’d probably expect if you’ve ever previously used a Pixel phone or seen images from one.

There are two sensors on the back, a 12MP main with an f/1,7 lens and an ultra wide 16MP companion. While there’s no dedicated zoom lens, Google said it has worked to recreate the 2x tele experience via software. That’s true to a point as the digital zoom is good but no match for an actual optical lens.

I’ve delved deep into the Pixel 4a 5G/Pixel 5 camera in our full in-depth Pixel 5 review so check that out for details on video improvements and lots of sample shots. But the short of it is that the Pixel 4a 5G takes excellent pictures, in all sorts of conditions and while it’s not a huge step up over the Pixel 4, for a phone at this price it’s unmatched.

The Pixel 4a 5G shines in both well lit and darker situations, with the HDR tech Google has been improving for years helping pull very contrast-heavy images. Colours are bright but still accurate, dynamic range is unmatched and the Night Mode manages to brighten even dark and dingey bar scenes. I like how the mode is now suggested when the light worsens, rather than forcing you to manually remember it’s there.

While last year’s Pixel 4 had a zoom camera, all the new models all ditch this for an ultra wide. This is handy for some striking landscapes, but in reality, I liked the versatility of the zoom and I think it’s missing here, just as it is on the cheaper iPhone 12 models. Shots from the ultra wide are good, though the sensor isn’t quite the same quality as the main.

Video here is notably better than on last year’s models. With 4K 60fps shooting and generally nicer colours and, to my eye, better stabilisation. 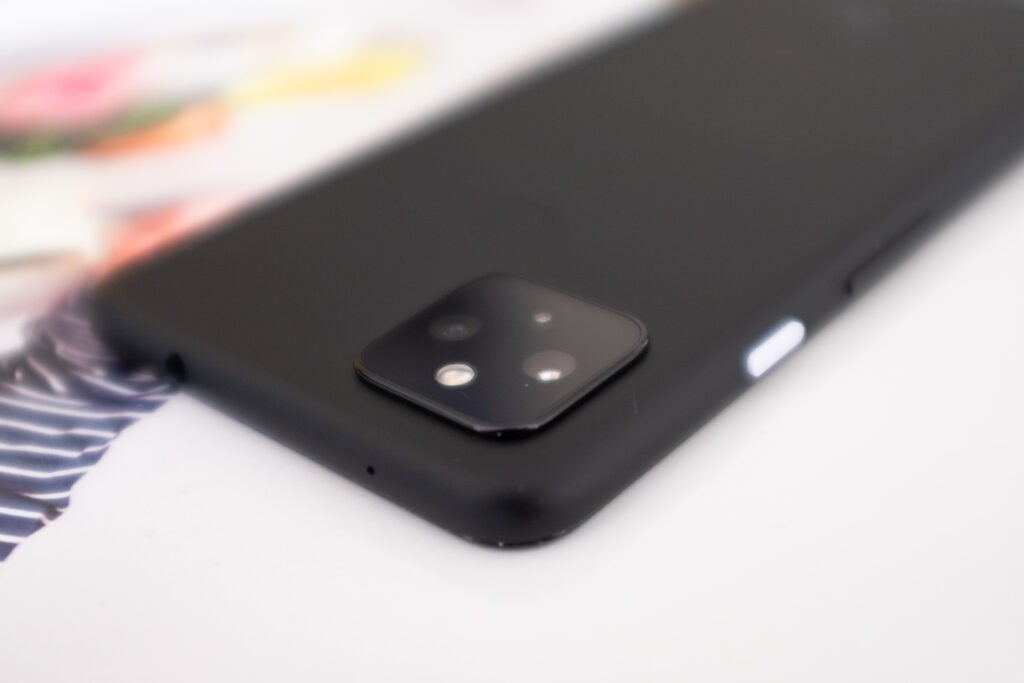 There’s a 3800mAh cell inside the 4a 5G and it comes with an 18w USB C PD charger in the box. While the battery is slightly smaller than most phones’ this size, endurance is on par with the Pixel 5 (which has to push a faster screen) meaning you’ll get through the day with about six hours of charge left.

Throughout my time with the 4a 5G I haven’t had it die even with heavy use in a single day. Of course, I am working from home and my usage has changed a lot this year.

Should you buy the Pixel 4a 5G?

The 4a 5G is a mash-up of both the 4a and Pixel 5 and in many ways that makes it the hardest to recommend. It lacks some of the more ‘flagship’ features of the higher-end model and is missing the downright affordable price tag of the 4a.

Still, for £499 you’re getting 5G and an excellent dual camera. There is a lot of competition around at this price though, with the excellent OnePlus Nord outpacing the 4a 5G in a number of areas for less.

Then there’s the Pixel 5, which is £100 more and offers benefits like a better screen, wireless charging, metal body and an IP rating. It’s a tough choice, but if you can afford it I think the Pixel 5 is a better buy.