What is the Tesco Hudl 2?

Launched in October 2014, the Tesco
Hudl 2 follows the supermarket giant’s first venture into the tablet
market with the original Android-powered Hudl.
Given that Tesco isn’t exactly renowned for its tech innovation, the
first Hudl caught us a little off guard with its competence, and this
sequel continued the good work, winning TrustedReviews’ Best Value
Tablet of 2014.

It may not be able to challenge the likes of the iPad Air 2 at the top-end of the market, but it still offers excellent value for money, decent performance and a well-considered design.

Less
than one year on from launch, the Hudl 2 is now available for just £99,
down from the original price of £129. At launch the Hudl 2 was £10 more
expensive than its predecessor, and that extra tenner brings
improvements right across the board. The screen size has increased from 7
to 8.3 inches, bringing with it Full HD resolution. It’s now powered by
Intel and has new child safety features, making it a tablet the whole
family can use.

Where the Hudl, which has reduced in price to
just £79, made compromises, the Hudl 2 doesn’t. Whether you pay £99 or
the £65 or less you can get it for if you have enough Clubcard points,
this is the best budget tablet you can buy and one to look out for this
Christmas.

While the first Hudl was a small, stumpy 7-inch tablet, the Hudl 2 now has an 8.3-inch display giving it a more narrow frame, which is better suited to using the Tesco tablet in landscape mode. 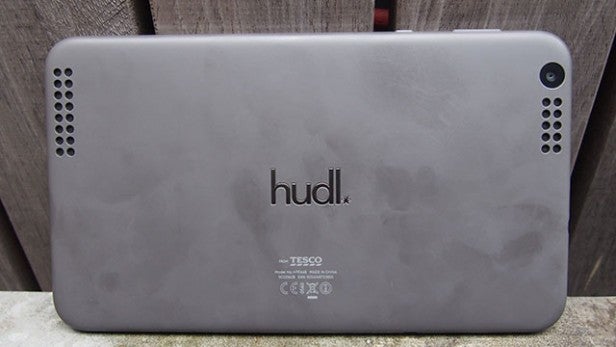 Weighing 410g, it’s heavier than the first Hudl (370g) and it’s definitely noticeable when holding it in one hand in portrait mode. Smaller hands will definitely find it more manageable in two hands. It’s slightly thinner though at 9mm thick, which does somewhat make up for the extra bulk.

It’s still a comfortable tablet to get to grips with and that’s helped once again by the soft touch plastic back, that sits even more snug against your hands and extends to the trim around the edges of the tablet where the corners are gently curved. 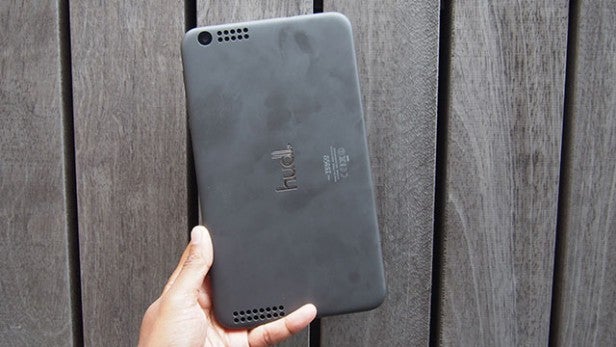 Tesco is sticking to its colourful, child-friendly theme with the Hudl 2 available in eight different colours with names like Tropical Turquoise and Bubblegum Pink. We had the Slate Black model, which is obviously the most serious and dullest looking of the bunch but whether you want something that’s bold or more understated, you have plenty of options here and there are cases to go with it too.

Build quality on the Hudl 2 feels similar to the first Hudl. The rubbery plastic has a nice durable feel however it seems the iPhone 6 is not the only hardware with bending issues. The Hudl 2 has some serious flex even with the slightest of pressure applied. It doesn’t have that worrying feel that it’s going to permanently turn the tablet wonky though and feels like a measure to make it more robust and child-proof.

Looking around the tablet you’ll find the micro USB charging port on the bottom edge with the volume rocker and standby button situated high up on the right edge. Unlike the Nexus 7 (2014 Edition), you’ll find a micro SD card slot so when you use up the 16GB onboard storage (which is actually closer to 9GB of usable space) this can be bumped up to 48GB. An additional 8GB micro SD card can be bought for as little as £4 on Amazon, so it doesn’t cost a lot to make more room for content. 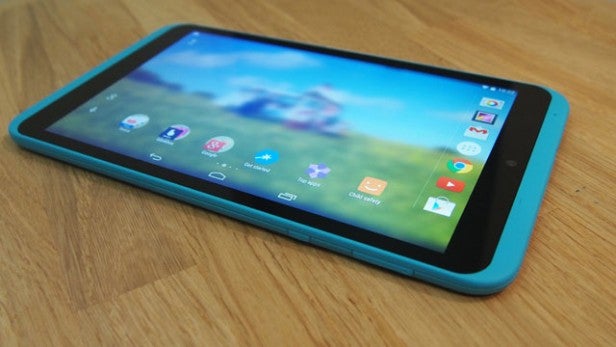 Alongside the SD card slot is a micro HDMI port so you can hook the Hudl 2 to a HD TV to watch video or view photos on a bigger screen. Again, the micro HDMI cable you need is not supplied in the box, but you should be able to pick one up online for around £5, so it’s not an expensive investment.

Around the back is where you’ll find the new 5-megapixel camera sensor, which sits in close proximity to one of the two redesigned speakers that now have a nicer-looking drilled holed design that definitely adds to the Hudl 2’s already pleasing aesthetic. 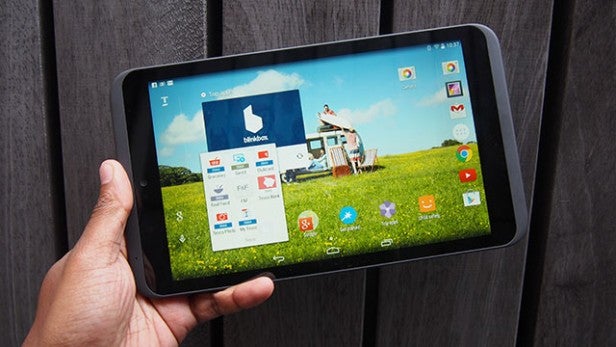 The most noticeable hardware change is the screen. The murky, slightly washed out 1,400 x 900 resolution model of the original Hudl is no more, replaced with a Full HD 1920 x 1200 IPS LCD display that’s sharper and so much nicer to watch video and read on.

The higher resolution may be spread across a larger 8.3-inch screen but pixel density has still been given a decent boost ramping up to 265ppi. As such it’s so much better than the original and there’s not many £120 tablets that can offer this kind of screen quality. The Asus Memo Pad HD 7 is in the same price range as the Hudl 2 but only packs a 1,280 x 800 resolution display.

If we are going to be picky, and it’s our job to be really, it’s not the brightest display we’ve used even on its maximum setting. Also, whites are not exceptional and it lacks the punchy, vibrant colours you’d find on a Super AMOLED. You’d have to pay more to see improvements in those areas on similarly sized tablets though.

A nice added bonus is the use of IPS display technology to improve on the average viewing angles of the original plus it offers some improved visibility using the Hudl 2 outdoors in bright sunlight. 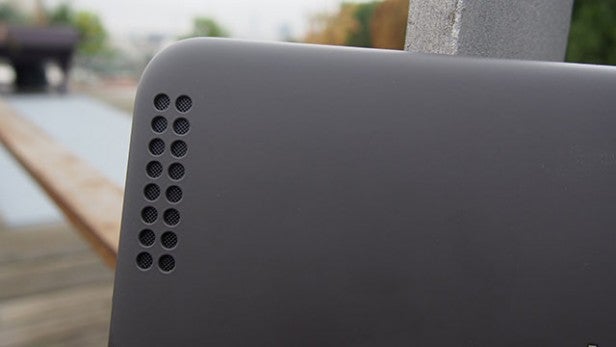 To add to the Hudl 2’s video-watching credentials is the inclusion of new stereo speakers with Dolby optimized audio. Positioned on the back of the tablet, they offer significantly better sound quality, especially for watching films, but it’s not perfect.

Amazon has used Dolby optimized audio in its Kindle Fire tablets with the aim of offering greater depth, richness and warmth so you don’t get that tinny, grating audio quality you usually find on most cheap tablets.

Tesco hasn’t revealed specifics about the Dolby-powered technology but it looks likely to be the same Dolby Digital Plus used in Amazon tablets to create surround sound through the speakers and headphones adding qualities like constant volume across all applications.

There’s some Dolby Audio options in the settings where you can opt for default mode for video and gaming, a dedicated music playback mode or one for improved voice clarity when making video calls.

It doesn’t take very long to notice how much better sounding these speakers are. Watching a film through Blinkbox Movies, sound has the directional quality to make audio sound more immersive and the detail is great as well – stereo speakers on a tablet really are worth looking out for. When you need to turn things up louder however, it loses its stability and some of the bad qualities you find in tablet speakers begin to creep in.

We’d say the Kindle Fire HDX tablets are still slightly ahead, but these are still a great set of speakers that surpass the quality of a host of more expensive tablets.