The original Nexus 7 had a good screen. The 1,280 x 800 7-inch screen with its 216 pixels per inch is still sharp by today’s standards. Yes, pixels are visible if you look closely and text can be a little blocky if you’re not zoomed into a webpage, but few owners complained too much about its sharpness.

But this hasn’t dissuaded Google and Asus from upgrading the screen to ‘retina class’ 1,920 x 1,200 resolution, equivalent to 323ppi. That’s the highest ‘pixels per inch’ of any tablet at present. Indeed, the Nexus 7 2’s screen packs in almost twice as many pixels per inch as the iPad mini, and boy is it apparent. Everything you view on-screen is razor-sharp. Text is perfectly defined without a hint of pixelation, whether you’re zoomed all the way out or up close. The IPS technology the screen uses also means that viewing angles are great. 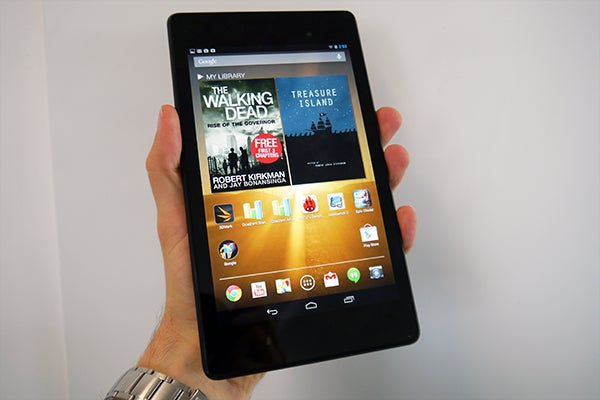 One of the main issues we found with the original Nexus 7 is its washed
out tones and the pinkish tint it gives to white backgrounds. But hold the Nexus 7 2 straight on and you’ll notice no issues whatsoever. It looks like the screen has been put into an industrial washing machine with a ton of Daz and a sprinkle of Vanish for good measure.

Whites are as accurate as we could hope for, while colours ping off the screen. We did notice some colour inaccuracy – tones being a little off on occasions and a little oversaturated – but not enough to affect enjoyment.

The screen is also significantly brighter than before and contrast levels impressive. Blacks and shadows are accurately represented in dark scenes, while full HD video runs smoothly and looks sumptuous on such a small screen.

The speakers on the original Nexus 7 were a major let-down, as was its audio output in general. While the screen handled 720 HD resolutions just fine, you needed to be three inches away from to hear what was said. Even Michael Bay explosion fests played at full volume sounded like a mouse with a dicky tummy. Sticking a pair of headphones in didn’t help matters much, either. The audio output simply wasn’t strong enough.

Thankfully, Google and Asus have opted for more powerful ‘surround’ speakers and drivers by Fraunhofer on the Nexus 7 2 and it’s made a huge difference. You won’t be perforating any eardrums, but you can happily watch a film or listen to some tunes with company. Sound is basic and lacks depth, but it does the job.

Because the speakers are at the top and bottom you do run the risk of covering them when holding the Nexus 7 2 in portrait mode, but it’s a small price to pay for the extra grunt. Attach a pair of headphones and you’re rewarded with acceptable levels of volume – a big improvement on the original’s puny output.