Android has come on leaps and bounds over the last few years. While it’s still not as simple to use as Apple’s iOS, it’s become much more user-friendly.

The huge increase in Android devices has also led to the Google Play Store becoming a vibrant marketplace. The quality or quantity of the apps is not on a par with the Apple store but neither is the difference as great as it once was.

Google is constantly refining and improving Android and we’ve already talked about some of the camera app changes 4.3 Jelly Bean has introduced, but there are a few other notable additions. 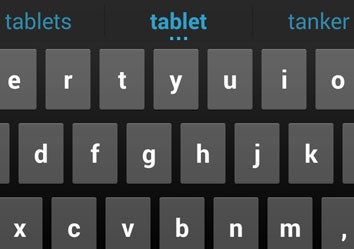 Introduced in Android 4.2 but refined in 4.3 the gesture keyboard predicts words as you type, making writing on a touch screen quicker and more accurate.

Smarter Notifications:
Smart notifications have been around on Android for a while, but 4.3 makes it even easier to access and action them. If you slide a finger down the right hand side of the screen you get instant access to the Nexus 7 2’s settings, while the left hand side shows notifications.

Location detection via Wi-Fi, Daydream:
Having to keep your Wi-Fi on for location services drains the battery. Android 4.3 now allows location services to work accurately even without having the Wi-Fi constantly on.

Restricted Profiles:
One the biggest and best additions to Android 4.3 Jelly Bean is the ability to add multiple user profiles. Profiles can now be set up for apps and content, meaning you can restric access to children or any other users without concerns. 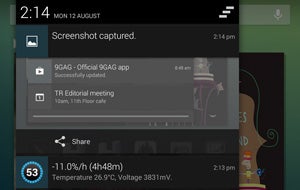 It’s an area Android has caught up with Windows, but Apple and iOS are still lagging behind.

Android 4.3 issues
We did find some compatibility issues with certain apps in Android 4.3, however. These were predominantly video playing apps. For example, MX Player would not load at all. These are very likely temporary issues, but it goes to show that Google doesn’t quite have the same ethos as Apple when it comes to transitioning users to a new version on an operating system.

We also found that the auto-brightness setting to be overpowering, darkening the screen too much, as well as causing some screen flickering.

If you want to know more about what’s new then read our Android 4.3 Jelly Bean Review

The original Nexus 7 was powered by an Nvidia Tegra 3 processor. While this was nippy enough to start, with many users have experienced bugginess and slow-down of their tablet over time.

The Nexus 7 2 has instead opted for Qualcomm’s Snapdragon S4Pro running at 1.5GHz, with an Adreno 320 GPU and 2GB of RAM. If those specs sound familiar it’s because they are exactly the same innards as those in the Google’s Nexus 4.

While on paper the Nexus 7 2 looks like a 7-inch Nexus 4, it actually performs better on a number of benchmarks, almost 25% better in fact. It also outperforms the Nexus 10. This is mainly because the flash storage on the tablet is faster.

As you’d expect it also wipes the floor with the previous Nexus 7 in all the benchmark tests we conducted. 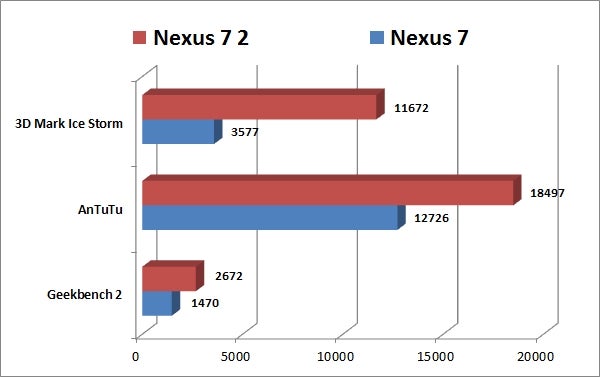 In gaming tests the Nexus 7 2 proved to be more than twice as fast as its predecessor. What this means in day-to-day terms is that you can happily use the Nexus 7 2013 to play even the most intensive 3D games, such as Real Racing 3 and Dead Trigger, with no lag whatsoever.

Apps open instantly and the Nexus 7 2 zips through the menus and settings. The only time we noticed any stuttering or pausing was when the screen rotated while a video was playing.