The headline feature of the LG G4’s battery life is that it retains its removable battery. No other major phone manufacturer has kept this feature on its flagship phone. Does it matter? Well, yes and no. It’s unlikely you’ll carry a charged spare battery around with you, especially now external battery packs are so cheap and work so well. If you do intend to keep the LG G4 for more than a couple of years this does mean you can easily replace the battery down the line when it starts losing charge, something that happens to all smartphones after a while. 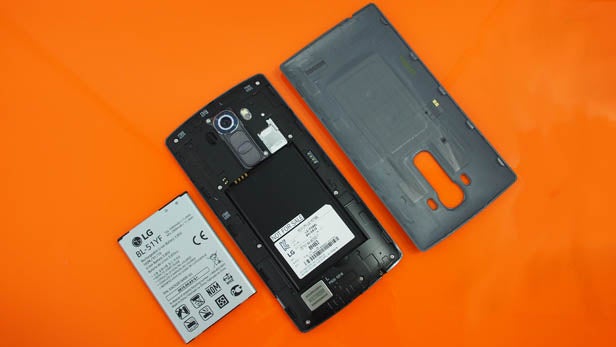 Battery life on the LG G4 should be decent considering the big battery and a few tricks to help extend its longevity.

The first is that the G4 can puts its CPU to sleep when displaying a still frame. So if you’re reading a book on your phone or looking at images on your photo gallery you get a few power efficiencies. The screen is also a little more power efficient, as is LG’s Optimus 4.0 interface. 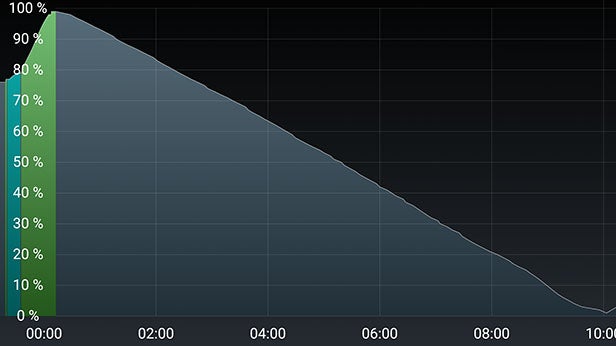 What this all leads to is better battery life than its predecessor, but not by much. It managed just under 10 hours for our standard looped video test, which is an hour more than the LG G3, but a lot less than the 13 hours of the Galaxy S6.

The Samsung seems to ace this particular test, though. In day-to-day use, with more varied tasks, the LG G4 lasts as long as the S6, but is a more consistent performer. We didn’t experience any unaccountable drops in battery life over a short period of time. On a normal day you should get home after work with 40% of the G4’s battery still available. 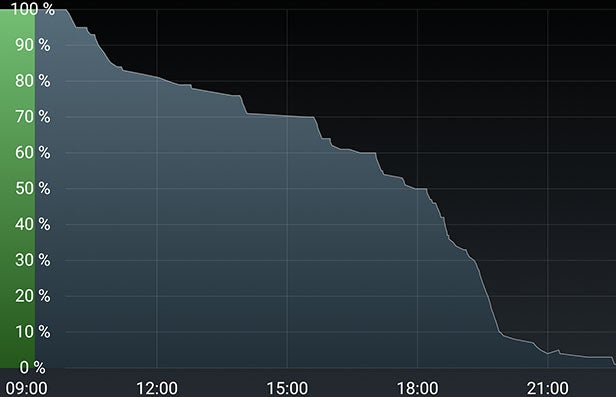 Used heavily with a few hours each of 3D gaming, watching video, 4G web browsing, listening to music and taking a bunch of photos and the G4 will take you through the day – just. And that’s with the screen at a reasonable setting. Whack the brightness on that 5.5-inch beast up to max and all bets are off – you’ll be looking for the charger in no time.

Battery-saving modes make less of an impact than on the HTC One M9 and Galaxy S6. For a start you don’t get extreme power saving which lets you eek out a couple of hours of core use (such as phone calls and texts) when you’re in a real bind. It doesn’t seem to throttle the processor either, judging by our benchmark results. This might be why LG hasn’t made a fuss of it – you have to delve into the general phone settings to turn battery saver on. It turns on automatically when you’re at 15%, but it would be nice to have quick access to it, like you get on other Android phones.

The LG G4 comes with quick-charge technology, but you need to buy a special charger for that and its sold seperately. We found it charged from 0-100% in around 1 hour and 45 minutes using the standard plug and cable in the box. That’s just a little more than the Galaxy S6, but the battery on the G4 is a fair bit bigger.

Ultimately, battery life on the LG G4 is pretty average. Even though it’s got one of the biggest power-packs around, it doesn’t outlast the competition.

The LG G4 has one of the loudest ear speakers around. If you’re a little hard of hearing or work in noisy environments where this is important then the G4 is a good phone to have.

Voice sounds good on the other side of the line too. A noise-cancelling mic keeps external sound to a minimum and lets the other person hear you clearly.

In an area that’s become a bit of an afterthought in smartphones that can do so much, the LG G4 does a bang-up job.

The LG G3 was the cheapest of the major flagship handsets around last year and the LG G4 keeps with tradition. You can buy it for £450/$550 outright and and that makes it significantly cheaper than the Galaxy S6, HTC One M9, iPhone 6 or  iPhone 6 Plus.

LG G4 has those trumped in areas aside from the price. The screen is bigger without it affecting use, the camera is excellent and you can expand the storage on the cheap. But it lags behind the others in the kudos stakes because it’s not made of metal. The iPhones and HTC offer arguably better software experiences too.

The LG G4 is well worth its price, but its stiffest competition comes from its predecessor, the LG G3. It has almost the same design, but is a little slower, the camera and battery life not quite as good and the screen isn’t as bright. You can get it at almost half the price of the G4, though, and that’s a great deal and well worth considering if you’re not fussed about being bleeding edge.

The LG G4 is a successful evolution of a great phone. This is yet another brilliant all-round flagship from LG, but its persistence with using hard plastic makes it feel like less of a quality phone, even if it isn’t.