Having an additional software layer over Android can cause issues. It can make phones a little temperamental and laggy, regardless of how powerful a processor they pack.

So why do manufacturers do it? It’s to make their brand feel unique. We’ve been critical of LG and Samsung in the past for this reason – only HTC seems to get it close to right. 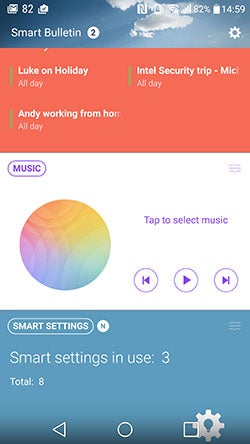 Like Samsung and its latest version of TouchWiz, LG has made its Optimus UX less in-your-face – it’s not perfect, but it’s not bad either. The LG G4 is as quick and responsive as any other phone. Opening apps and flicking through menus is nice and slick.

The LG G4’s software style feels contemporary enough and some features, like Smart Notice, give you regular helpful tips and advice on using your phone. When you close a game you’ve been playing for an hour the G4 will tell you that it uses up lots of your battery. Many people will be aware of this already, but some won’t. The notification is tactful, so you won’t be too bothered by it either way.

Rather than bringing content you like to the phone, as the Galaxy S6’s Flipboard or HTC One M9’s Blinkfeed do, the LG G4 prefers a home screen more focused on health and productivity. Smart Bulletin gives you access to core features such as LG Health, calendar, QRemote (which lets you use the built-in infrared blaster to control your TV), and Smart Settings. 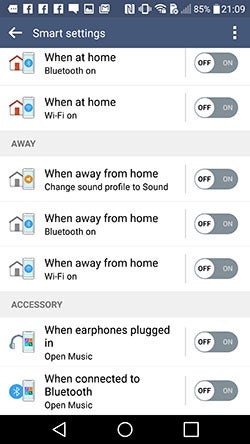 Smart Settings is the pick of the bunch and brings a bit of If This Then That, Internet of Things, cleverness to your phone. For example, you can tell the LG G4 to turn on Wi-Fi when you’re home, so it’s not draining battery when you’re out and about, or open the music app when you plug a pair of headphones in. There are only eight Smart Settings to choose from at the moment, but it’s an area with a lot of potential if expanded.

The LG G4 doesn’t have the best Android interface around, but it is better than ever before and, crucially, isn’t annoying.

Perhaps the biggest benefit the LG G4 has over its nearest competitors is that it’s kept core hardware features such as a removable battery and microSD card slot. It hasn’t followed Apple and Samsung down the route of onboard-only storage, and that’s something a lot of people care about. With 32GB for you to fill before you need to slot in a card, some won’t need to add a card at all.

We’ve already mentioned the IR blaster, but you’ll also find the usual range of connectivity you’d expect on a flagship on the LG G4. There’s dual-band Wi-Fi, Bluetooth 4.1, NFC, lightning-fast 4G and Slimport 4K. The latter lets you connect your phone to a TV or monitor to play video up to 4K resolution.

Not much is missing at all. You might point to the Galaxy S6’s wireless charging, but we’d much rather have expandable storage than that so, in all, the LG G4 wins out in the feature stakes compared to Apple and Samsung’s finest.

Bear in mind that the LG G4 uses a Micro SIM not a Nano SIM, so if you’re jumping from an iPhone 5S or HTC One M8 to the G4 you’ll need a new, larger SIM from your network provider.