LG has decided to choose the Snapdragon 808 to power the G4, rather than the 810 found on the LG G Flex 2 and HTC One M9. This is a wise decision.

Reports suggest phones packing the Snapdragon 810 suffer from overheating issues and poor battery performance – something we’ve experienced first-hand ourselves. We’ve not had this problem on the LG G4.

The downside of not packing the 810? Well, the Snapdragon 808 doesn’t perform as well in our benchmark tests as its fiery bigger brother. That’s not to say the G4 is a slouch – it’s plenty fast for all the most important tasks you want to use it for, and a little faster in benchmarks than the iPhone 6. On top of that it doesn’t get hot, even after a decent bout of 3D gaming. 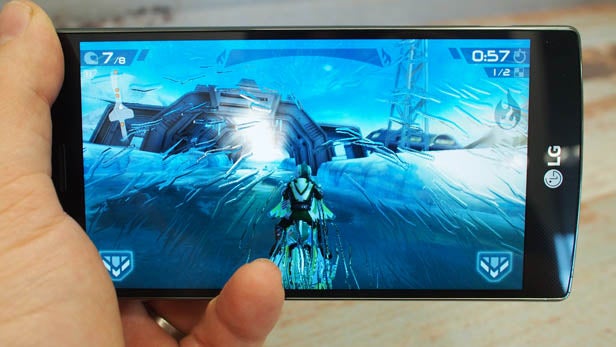 The LG G4’s chipset uses ARM’s big.LITTLE architecture. This means one processor is used to perform intensive tasks while another, more power-efficient processor takes care of more basic tasks. The benefit of this is savings to your battery, letting you enjoy your phone for longer.

You might expect the quad-core to be the big processor, but in reality it’s the dual-core that shifts into gear when the LG G4 is being pushed hard.

The numbers bear out what we’d expect: the G4 is a little slower than the HTC One M9 at full power. The Galaxy S6 and S6 Edge shine in these tests, but the fact is that most people won’t notice much difference between any of these powerhouses. These phones are all slick to use and powerful when pushed.

In real-world use the LG G4 is just as quick – intense games such as Riptide 2 look great and play smoothly. It could be faster, but it really doesn’t need to be.