The iPhone XR was our favourite iPhone of 2018 thanks to a great mix of affordability and feature set so there’s a lot riding on the iPhone 11. But exactly is new? Let’s take a look and see what different with this year’s model.

Read on for a deeper look at the phones or see the points below for a quick overview.

Apple isn’t really in the swing of updating how its iPhones look at the minute. The last major redesign came with the iPhone X a few years ago, and before that we had a very similar design dating as far back as the iPhone 6.

The iPhone 11 and iPhone XR look very similar. They have a flat glass back, rounded sides and are constructed from a mixture of glass and aluminium. Both have 6.1-inch Liquid Retina LCD displays on the front with a FaceID sensor buried inside in a protruding notch. Neither has a home button, with all the navigation being done by the software gestures.

Flip the phones over and you’ll notice a few changes. The camera area now houses two sensors rather than just one and the bump has a squared-off look to it. There’s also a new pastel green colour added, which looks pretty nice in the initial shots. The colours overall on these new phones are a little more muted but they still look nice.

Both phones have a water-resistance rating (IP67 for XR and 68 for the 11), lack a headphone jack and charge via a Lightning port on the bottom.

Inside the iPhone XR you’ll find a raft of high-end internals, albeit it ones that aren’t on par with the flagship XS. The 6.1-inch display is LCD, the amount of RAM smaller and the resolution much lower.

iOS 13 is available across both devices and it’ll come pre-loaded on the iPhone 11. This latest version of Apple’s mobile operating system comes with a new dark mode that turns the whole UI, along with native apps, an easier to read black hue. There’s also a new keyboard that lets you type by swiping across the letters and big updates to the Maps app. 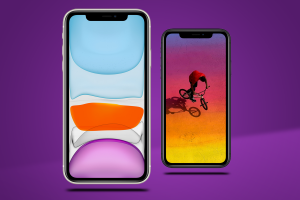 The camera is the biggest upgrade with the iPhone 11. The dual 12-megapixel sensor array captures both wide and ultra wide snaps with fantastic detail. The Smart HDR has been improved a lot since the XR was released and as such colours are more true-to-life and detail is far superior. The iPhone XR still takes good photos, but the single camera just can’t compete with the quality of pictures you’ll get from the iPhone 11. Both phones shoot 4K video.

The biggest reason to upgrade from the iPhone XR to the iPhone 11 is the camera and we don’t think you’ll regret it if you make the move.

In terms of battery life you’ll get about an hour more use out of the iPhone 11 when compared to the iPhone XR. The battery size remains the same with the more efficient chipset giving you that extra time. Both phones ship with a slow 5w charger with the faster USB-C model being sold separately.

Wireless charging is supported, through the Qi standard, with both phones supporting 7.5w of power wirelessly.

While the iPhone 11 is a great phone, we probably wouldn’t suggest anyone who has recently picked up the XR to feel too left out. Camera aside, the changes are minimal and the XR remains a speedy phone. If the choice is to go for an iPhone 11 OR an iPhone XR then it’s also better to pay a little bit more to get the newer model and benefit from those upgraded features.