Apple’s next big software update for smartphones is soon upon us; it’s expected to be rolled out after Apple’s Special Event on September 10, which will see the launch of the iPhone 11. Significantly, iOS 13 is now reserved solely for Apple’s iPhones (plus the iPod Touch family), with an all-new iPadOS now exclusively for Apple’s range of tablets.

The three devices in the highly anticipated iPhone 11 series will therefore be the first to launch with iOS 13 running from start-up, while older iPhones and iPods will be able to benefit from the new experiences that the update brings a few days beforehand.

You might be excited or even a little apprehensive about the next operating system facelift, depending on your experience with previous updates. Fortunately we’ve compiled this handy guide to all the details we currently know about iOS 13 and how it’ll change the way you use your iPhone.

When will iOS 13 be released?

We first saw iOS 13 outlined at WWDC 2019 in June, but since then only the developer’s beta has been available to use.

However, it;s strongly tipped that the finished software will be shown off at Apple’s Special Event on September 10, as the latest operating system has been unveiled alongside the new generation of iPhone handsets ever since the iPhone 5. 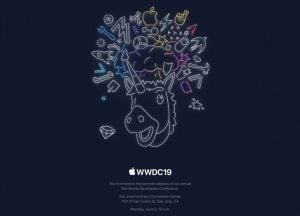 The new generation of iPhones will be released on the Friday following the event if tradition is anything to go by, at which point users with compatible iPhones will have already had a couple of weeks to get to grips with the newest iOS features.

Apple has released the following list, showing all devices eligible for the iOS 13 update:

Unfortunately, that means the update will be unavailable on the following devices: iPhone 5S, iPhone 6, iPhone 6 Plus, and the sixth-generation iPod Touch.

iPads that will remain on iOS 12 (or earlier), rather than picking up the all-new iPadOS, include the original iPad Air, the iPad Mini 2 and the iPad Mini 3.

Dark mode has become a popular alternative interface recently, and for that reason it’s one of the key features on iOS 13.

This black and grey-theme will be accessible from the Control Centre, and comes in handy if you want to use your phone at night without being blinded by a stark white backlight. 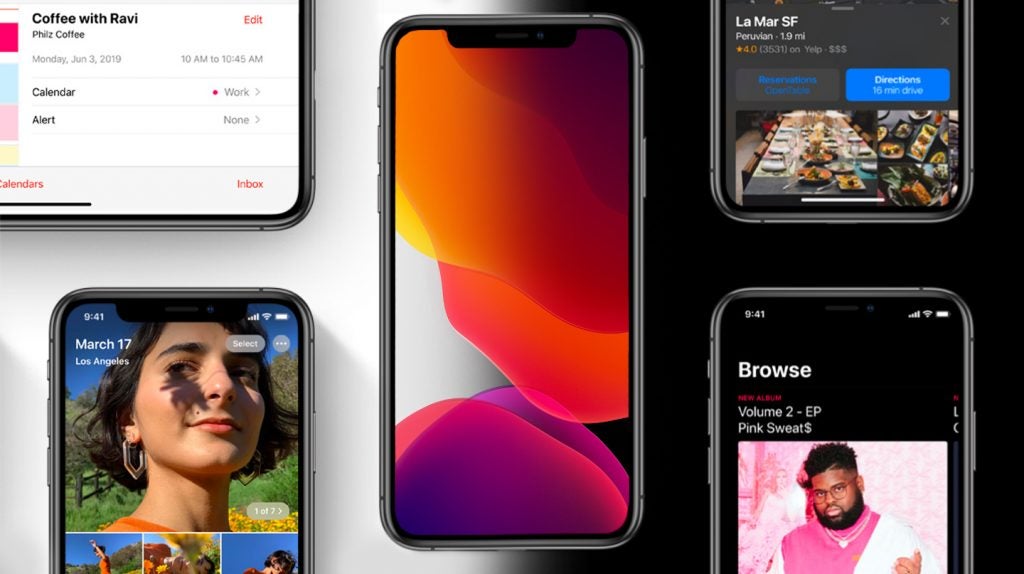 Diving into the iOS 13 beta, there are four new reactive wallpapers to choose from which come in both a light and dark version. If you’d rather use your own wallpaper, there’s also a new toggle within the display settings menu called ‘Dark Appearance Dims Wallpaper’, which pushes the contrast on your chosen wallpaper image to better complement iOS’ new darker hues.

Elsewhere is dark mode, widgets also adopt a darker backdrop, while bright text in apps like Notes, Calendar, Messages, Photos and Music all take on a red hue and their respective backdrops switch to true black. The native iOS keyboard also embraces a black/grey palette too.

iOS 12 placed a heavy emphasis on performance, but Apple isn’t complacently resting on its laurels – Craig Federighi stated that iOS 13 has been designed to “make everything faster, top to bottom”. So what does that mean in practice?

Firstly, quicker unlock times. Face ID was never as snappy as older iPhones’ capacitive fingerprint sensor-based Touch ID authentication, so according to Apple’s numbers it has been fine-tuned to function up to 30% faster on iOS 13.

Secondly, Apple has also restructured the way apps download and update, which will result in 50 percent smaller download file sizes and up to 60 percent smaller app updates. What’s more, the apps themselves are going to be able to open twice as quickly thanks to this new packaging system.

Apple’s signature Memoji avatars are gaining a ton of new customisation in iOS 13. As well as picking features like eye shape and colour, skin tone and hairstyle, you can now also choose your favourite makeup and accessories. Now you can give yourself braces or a gold grill, and even place small virtual AirPods in your Memoji’s ears.

Users typically need an Apple device with a TrueDepth camera, like the iPhone X, XR or XS to interact and manipulate Memoji, as they rely on face tracking — but with iOS 13 the company is also introducing ‘Memoji Stickers’ – static expressions that you can paste into chat directly from the keyboard, which will now be joining devices running an Apple A9 chip.

Beyond Memojis, the Messaging experience within iOS 13 is going to support integrated context-aware search, so you can more readily find not only recent conversations, but contacts, photos, links, and locations you might also be looking for. Chats will also come with an improved ‘details pane’ so you can view links, locations and attachments on an individual basis.

As part of Apple’s push on security and privacy during the opening WWDC19 keynote, it introduced a new login system called ‘Sign in with Apple’.

Designed to operate as an API for developers to use in their apps or available for use on the web, the ‘Sign in with Apple’ feature is aimed at giving the user greater control over what information they share when they login to multiple third-party services using a single connected account. 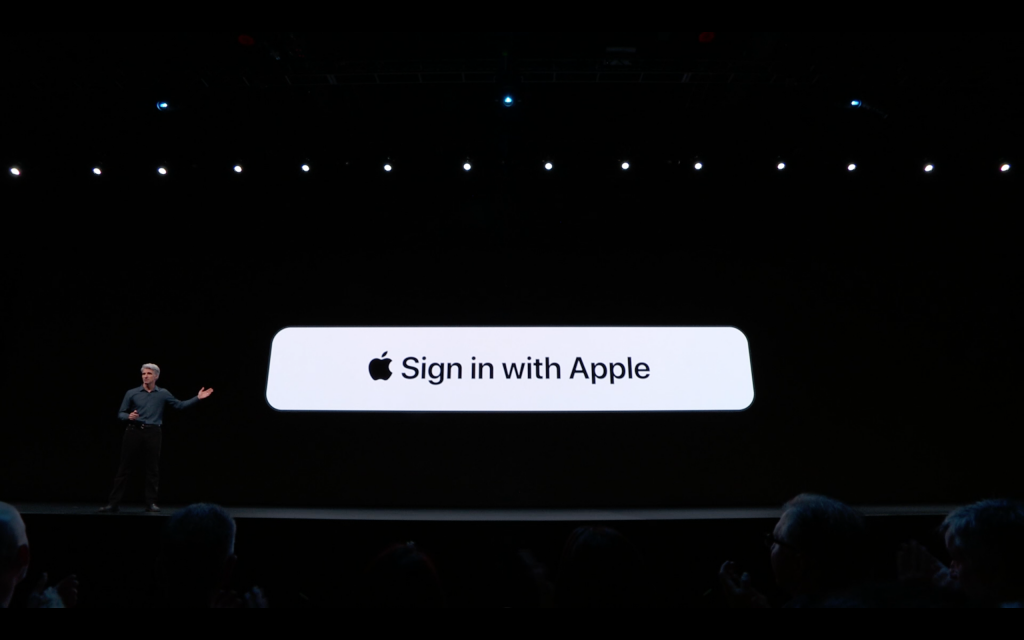 Unlike the seemingly similar ‘Login with Facebook’ or ‘Login with Google’ systems, Apple’s solution doesn’t immediately grant the third party your email address or any additional information you might have disclosed to those specific services, like gender or age.

‘Sign in with Apple’ gives the user the option to pick and choose which information is shared when they first sign into a new service.

If they prefer, they also have the option to hide everything, providing the service in question with a randomly-generated email address that automatically forwards any communications onto your actual email address, with the sender never knowing what your actual address is.

This operates on an app-by-app basis, so you can disable each service independently, too.

Apple Maps has always suffered by comparison to Google Maps, although the company’s successes with CarPlay have unquestionably helped with its adoption. With this in mind iOS 13 gives Apple’s native Maps app a significant upgrade.

The company has used a combination of cars and planes equipped with LIDAR to cover four million miles of terrain for newer, more accurate maps. Apple has promised that the entire United States will be charted by the end of 2019 and it will turn its attention to other countries soon after.

What’s more, Maps now has a richer Google Street View-esque viewing mode called ‘Look Around’ that offers impressive fluidity as you follow routes in first-person based on street-level photography.

Other improvements include ‘Junction View’ for clearer navigation when in complex road systems, real-time transit information, favourites for locations you like to keep track off and collections which consolidate favourite locations into lists you can share. 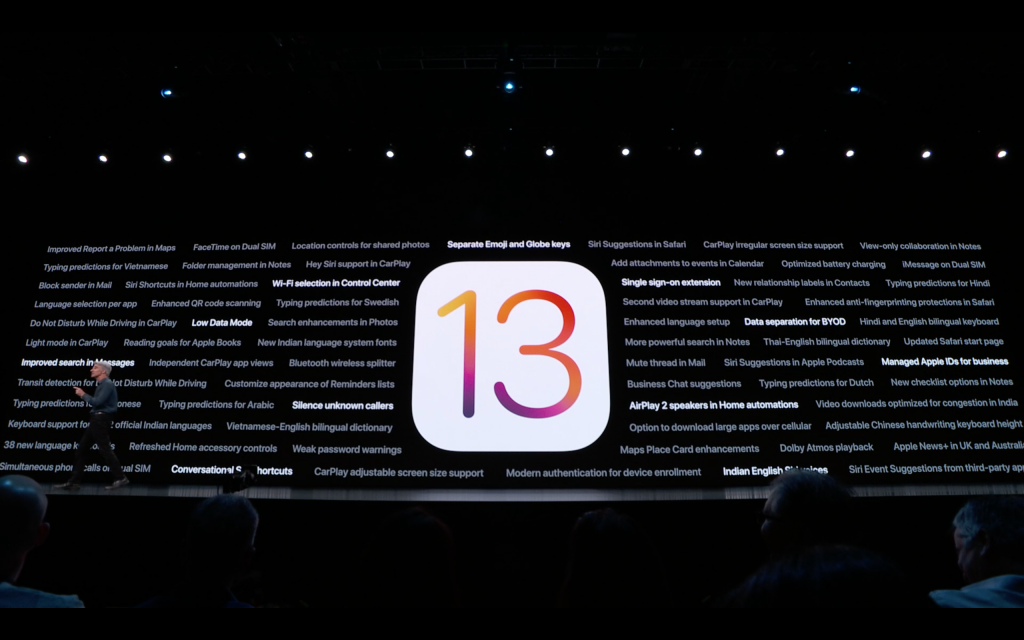 AirPods Audio Sharing: You’ll soon be able to share the music playing through your AirPods by tapping your iPhone with a friend’s iPhone (if they also have AirPods), creating a sort of wireless headphones splitter-like experience.

Camera: Users will now find an intensity slider to adjust the strength of the effect of virtual portrait lighting in their photos.

CarPlay: This unique in-car experience gets a reworked user interface, including a torchlight mode, plus more developmental display tools for automotive manufacturers.

Find My: Apple is consolidating Find My iPhone and Find My Friends into a single experience. This new feature will also support offline device location, letting you search for your lost Apple products using encrypted Bluetooth connectivity. When you mark your device as missing, other user’s devices will passively use Bluetooth help locate it – not dissimilar from Tile’s location tracker solution.

Gamepad support: Gamers will appreciate the option to use their DualShock 4 or Xbox One S controllers with iOS over Bluetooth.

Handoff to HomePod: Whether playing music, a podcast or taking a call, you’ll now be able to instantly resume it by simply holding your iPhone next to your HomePod.

HomeKit: For those with a smart home security setup, Apple is introducing HomeKit Secure Video-certified cameras.

Rather than pushing captured footage to the cloud for analysis, Apple is trying to remove any such vulnerability by instead having captured video assessed locally on your own iOS or tvOS-enabled device. Only then is it sent to iCloud as an encrypted file.

Apple is also pushing HomeKit-enabled routers from Linksys, Eero, and IP service providers like Spectrum, which will help support this greater focus on security.

Phone: Unknown callers can be auto-forwarded to answerphone automatically.

Photos: iOS 13’s native Photos app already supports rich editing tools but in iOS 13 additional features like ‘sharpen’ and ‘noise reduction’ join the fray. These editing tools will now, for the first time, also carry across to videos and, what’s more, you’ll finally be able to rotate videos on-device without the need for third-party apps.

Low Data Mode: A new option that will help reduce data consumption on an app-by-app basis.

Voice controls: Richer voice controls allow for greater accessibility with support for custom words, word correction by voice, gesture use by voice and attention awareness. This automatically enables and disables voice recognition based on whether or not the iPhone’s TrueDepth camera senses that you’re looking at your iPhone or not.