The HTC Desire 816 is a 5.5-inch Android smartphone with a similar stature to the Samsung Galaxy Note 3, but at a fraction of the price. Available to buy for around £300 SIM-free, it’s a big colourful phone competing with handsets like the One Plus One and the 6-inch Nokia Lumia 1320. Despite its plastic body and mid-range phone specs, there’s plenty of positives that make the Desire 816 a great value phone if you prefer your phones king sized.

SEE ALSO: OnePlus One vs Nexus 5

If you are on the lookout for a big phone, HTC has done a pretty good job of making this an attractive phone to own. There’s no metallic frame like the more expensive HTC One M8 or its smaller clone the HTC One Mini 2, opting instead for a combination of a glossy polycarbonate plastic non-removable back with a matte finish around the sides and the front of the phone, but it’s a nice looking phone.

It’s available in a six pastel shades, including white, black, red, dark blue and green, giving it a similar kind of finish to the Nokia Lumia 1320 smartphone, one that doesn’t feel cheap or nasty to hold despite being plastic. Helping its cause further is the slim, 7.99mm thick frame and curvy corners; combined with the featherweight 165g weight, the HTC Desire 816 isn’t as arduous to carry around as its imposing size suggests. 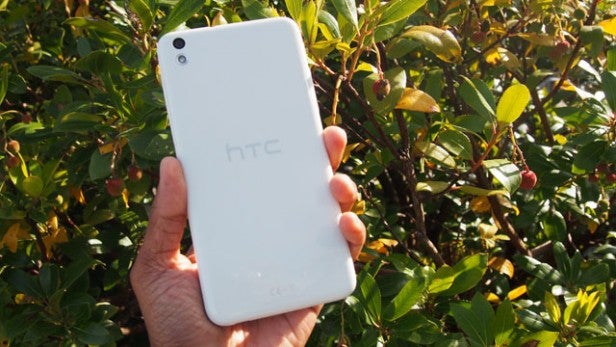 There are some issues we noticed, though. For example, the on/off button
and volume rocker sit up on the top left edge, making it very difficult
to reach with one hand. It also becomes a problem when you are trying
to take a picture in landscape mode, as it’s often easy to accidentally
put the screen into standby.

Getting the Nano SIM in place was a frustrating experience, too, and took
several attempts to get it firmly in place before locking it away out of
sight. You won’t have to this often, though, and it’s great to see a microSD card slot hiding behind the same hinged plastic flap. There’s space for another SIM card here, too, though it’s blanked out on our version. 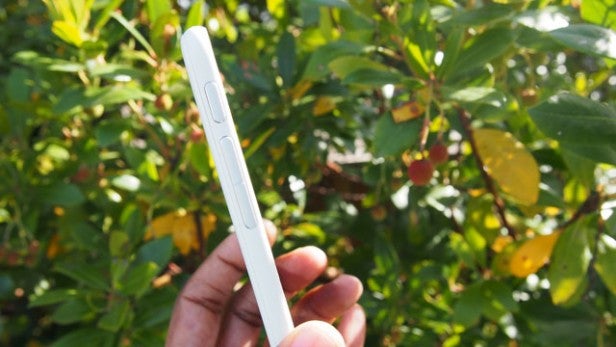 The HTC Desire 816 has a 5.5-inch screen with a 720p HD resolution and a pixel density of 267ppi. That puts it into the same screen size territory as something like the LG G3, but with a resolution more like smaller phones like the Moto G and the One Mini 2.

It’s clearly not a patch on the 1080p HD screen of the Galaxy Note 3, but the Desire 816’s Super LCD2 is a nice screen on which to watch videos, read web pages and play games. Maximum brightness is not as great as the One M8, but viewing angles are good and it’s easy enough to view outdoors. Black levels are strong, too, making it ideal for films, and on the whole colours appear nice and accurate.

It’s sharpness and clarity where the Desire 816 loses out to something like the 4.5-inch One Mini 2 (326ppi), but it’s a tolerable difference provided you’re not precious about it or used to smaller, higher-resolution phones. The relative lack of sharpness is only clearly evident on text and icons, and only when you look closely.

It’s a very responsive screen, too, as it handles screen swipes and actions with no issues at all. Resolution aside, then, it’s a very decent screen, particularly considering its size and the relatively cheap price you pay for it.