What is the HTC One Mini 2?

The HTC One Mini 2 is the ‘mini’ version of the HTC One M8 and the follow-up to the HTC One Mini. The not so small clone of HTC’s 5-inch flagship strips back some of the specs, while keeping the same attractive design. Prices are yet to be confirmed for the One Mini 2, but it’s already available for pre-order on some phone retail websites for £360 SIM-free and Vodafone is offering the One Mini 2 for £21 a month on 24-month contract, which is the same you can get the original One Mini for and £7 cheaper a month than the M8 on contract.

When you consider the same specs are packed into the sub-£150 Moto G on paper you are paying for the M8-inspired body. Is it enough?

Watch our video review of the HTC One Mini 2

Just like the HTC One Mini is to the One (M7), the One Mini 2 is the metallic offspring of the M8. It has the same beautifully curved aluminium chassis available in Gunmetal Grey, Glacial Silver and Amber Gold shades, though it’s not entirely identical thanks to the black plastic trim that runs around the sides, top and bottom of the phone. It’s not as prominent as it is on the One Mini and does break up the continuity of the all-in-one design, but it’s still one of the nicest-looking smartphones.

Up front, the One Mini 2 has the same proximity sensors and notification lights as the One Mini and houses the improved front-facing Boomsound speakers. It joins the M8 in moving to a Nano SIM where the card slot lies over on the right edge, with a volume rocker and microSD card slot (notably absent from the One Mini) over on the left. The headphone jack is also up top like it is on the original Mini next to the on/off button with the micro USB port at the bottom. On the back it doesn’t take long to spot that the M8’s duo camera is gone and the dual flash is now down to one.

Weighing in at 137g, it’s lighter than the M8 (160g), but it’s slightly thicker at 10.6mm compared to 9.6mm. It’s larger in all dimensions compared to the One Mini, too. It’s not enough to radically change how it feels to hold, though the ‘mini’ label isn’t quite as appropriate now. Thanks to the Boomsound speakers it’s as tall as a Nexus, which has a 5-inch screen, and only marginally narrower.

The One Mini 2 is still a gorgeous smartphone, though, and undoubtedly a better-looking effort than the original One Mini. 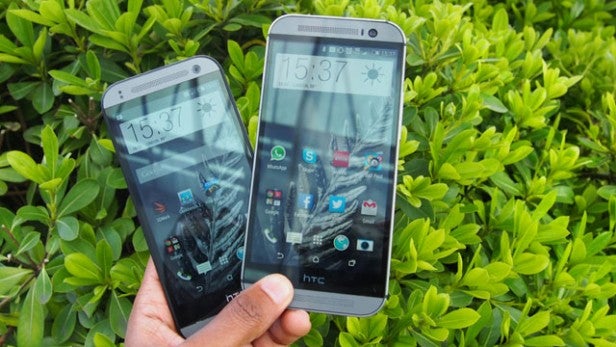 HTC hasn’t upgraded from the 720p HD display on the One Mini, which is mildly disappointing when you consider that the Moto G, now the benchmark for smartphones below the iPhone 5S, One M8, Galaxy S5 and Xperia Z2 boasts the same screen resolution. What has changed is the size, moving from a 4.3-inch display up to a larger 4.5-inch Super LCD 3 screen.

It’s a massive drop off from the M8 in terms of quality, but you do manage to get the same level of maximum brightness. Running a HD video, it struggles to replicate the punchy colours or the clarity on show on the bigger HTC phone. As an upgrade from the One Mini, which has an excellent 720pHD display, there’s improvements, but they are far from radical changes.

Watching the same film on Netflix side-by-side on the One Mini and One Mini 2, the One Mini 2 produces a subtly sharper image with better black levels and more natural skin tones. Despite spreading the pixels across a larger area the overall quality doesn’t suffer as a result.

There’s very little difference between the One Mini 2’s panel compared to the 720p one on the Moto G and it even uses the same toughened Gorilla Glass 3 to add a layer of protection and deliver the impressive viewing angles. The pixel count is pretty much on par with the One Mini 2, offering 326 ppi against the Moto G’s 329ppi.

All of which is, generally speaking, perfectly adequate at this size. Indeed, the One Mini 2 has more or less the same ‘pixels per inch’ as the iPhone 5S, even if it doesn’t quite match the iPhone for overall quality.