Which is the Better Phone?

The OnePlus One is one of the surprise high-end Android phones of this year. It comes from a company made by a former Oppo boss, and sells for a ridiculously low price, given its specs. It costs around £230, but can challenge phones like the Galaxy S5.

But is it really the new king of budget Android phones? We’ve compared the OnePlus One to the Nexus 5, one of the current top budget buys in the phone world.

OnePlus One vs Nexus 5: Design

Both the OnePlus One and Nexus 5 are plastic phones. This helps to keep both the price and weight down without scrimping too much on actual build quality.

While these phones are naturally going to be compared because they’re two obvious smartphone bargains, many people will find the Nexus 5 a bit easier to live with. The OnePlus One is closer in size to the Galaxy Note 3.

The Nexus 5 is also 30g lighter – the Nexus 5 is 130g, the OnePlus one 160g. It’s the width that actually matters most in phone handling, though, and once again the Nexus 5 is that bit more accessible in this respect. It’s around 6mm narrower, making it easier to use one-handed. 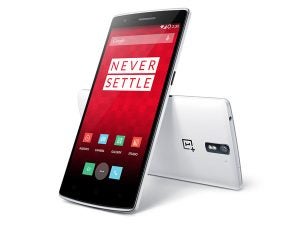 OnePlus One vs Nexus 5: Screen

Where the OnePlus one wins back the some of the points it loses with its large footprint is the screen. It’s a full half-inch larger than the Nexus 5’s display at 5.5 inches.

It doesn’t sound like a big difference, but it will be very noticeable in person. It’s roughly the difference between the Galaxy S5 and Galaxy Note 3, and will make the OnePlus One that bit better for watching movies and playing games on.

Both phones uses LCD-type displays with 1080p resolution panels. Having the same number of pixels spread over larger area makes the OnePlus One less sharp in theory, but in practice there will be little noticeable difference in normal use.

What we have heard is that the OnePlus One’s colours aren’t too hot – a little washed out. However, it may simply be that the phone has more accurate colours, like the Nexus 5, which has great colour accuracy. Then again, skipping proper calibration could be one way OnePlus has managed to save pennies on the production of this phone.

People often think accurate colours appear undersaturated because we’re so used to oversaturated colours these days. We’ll check this out in our full review.  But for now, it seems that at best the OnePlus One is similar to the Nexus screen, but bigger. 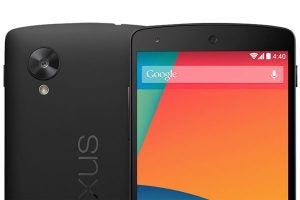 OnePlus One vs Nexus 5: Specs

It offers a bit more power, but is not something to base your buying decision on. Both phones will be able to handle top-end games like Real Racing 3 with ease. And these days there seem to be fewer and fewer high-end titles to show off the latest hardware like this, as larger devs tend to focus on more casual free-to-play games.

The OnePlus One also has 3GB of RAM, while the Nexus 5 has 2GB. This combo makes the One, in theory at least, more powerful than the Galaxy S5, the HTC One M8 and Xperia Z2 – not just the Nexus 5.

OnePlus One vs Nexus 5: Software

One of the most interesting differences between these two phones is software. At first glance the OnePlus One and Nexus 5 software looks very similar, and they are both based on Android 4.4 KitKat. But while the Nexus 5 uses a stock version (with the Google Experience UI), the OnePlus One has a custom CyanogenMod take on Android.

CyanogenMod is a community-based, open-source version of Android that gives you loads more control over settings and other features than normal Android. It’s for hardcore geeks and tinkerers, although if you’re just out for a bargain you can treat it much like a Nexus 5.

What does CyanogenMod let you do? There’s proper integrated FLAC support, which is patchy with Android 4.4, you can turn the phone on with two taps, and developers get loads more control over performance, and more information on how the system is running. The OnePlus One also has its own bespoke tweaks, as it runs a special ’11S’ version of CyanodenMod. These seem to include a new lock screen and a special theme that brings its own look to icons.

You still get Google Play and Google apps with the OnePlus One, so you don’t miss out on anything.

OnePlus One vs Nexus 5: Camera

The camera is one of the weaker parts of the Nexus 5. It has an 8-megapixel sensor of 1/3.2-inch size and an f/2.4 lens. Neither of these is particularly impressive for a £300-plus phone.

The OnePlus One sensor is larger (1/3.06-inch) and higher-res – and it has a faster f/2.0 lens to make up for having smaller sensor pixels. Its flash is also a dual-LED model rather than a single one. Its specs are better across the board.

You might have read about the OnePlus One having image stabilisation, but this is software based, rather than using actual dedicated camera hardware. The Nexus 5 does have the real deal – proper optical image stabilisation. And we found it really helps out with low-light shooting in our Nexus 5 camera review.

Still, on paper the OnePlus One is an immediately more impressive camera, which should be able to produce better photos. And, as we saw in the Galaxy S5, some software stabilisation modes are pretty good anyway.

The OnePlus One is a bit of a tech Top Trumps style mobile phone. It has deliberately gone out to one-up most of its rivals by packing-in high-end hardware at a low price. The Nexus 5 had no real chance to compete now that it is more than six months old, but still sells at its original price as a ‘current’ model.

However, we still think many of you will find the Nexus 5 easier to live with. It’s a significantly smaller phone, and while the OnePlus One boasts some hardware benefits, they’re not ones most normal buyers need to worry about. We’re keen to see if our initial feelings are right, however, once we get the chance the OnePlus One properly.