HTC One M8 vs One Mini 2: What’s the difference?

Joining the HTC One M8, the One Mini 2 is a smaller version of the flagship phone. Both have metallic bodies and the kind of stand out design that makes them two of the best looking phones around, but the One Mini 2 costs around £200 less than the One M8 SIM-free, so where are those savings being made?

From the curved metal aluminium back, curved corners, thin black screen bezel and the improved front-facing Boomsound speakers, the One Mini 2 and One M8 are clearly cut from the same cloth. The main difference is the size of the screen (5-inches vs. 4.5-inches), but there are some subtler differences as well.

For example, the One Mini 2 is 1.2mm thicker than the One M8, but is 23g lighter. There’s also a thin black plastic trim around the sides on the One Mini 2, while the headphone jack is on the top edge of the One Mini 2 as opposed to the bottom of the M8.

The One Mini 2’s smaller body makes it easier to use in one hand and doesn’t fill the hand in the same way that the M8 does, but both offer a surprisingly nice grip and are comfortable to use.

You get the same three colour options for both handsets so you can take your pick of gunmetal grey, glacial silver and amber gold. Additional red, pink and blue versions are also set to be available. 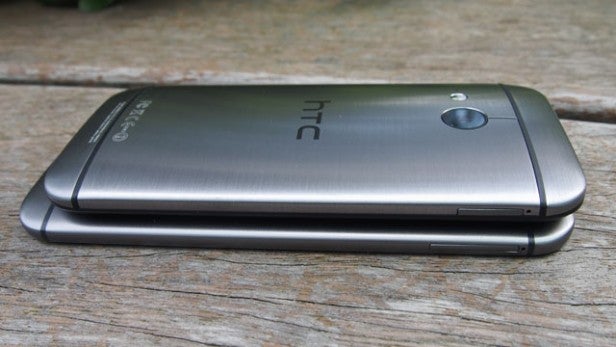 There’s really no competition here. The Full HD display on the One M8 is the superior display, particularly for watching video. The One Mini 2’s 720p HD screen still offers sharp, vibrant picture quality and is a good place to view video, but it simply can’t match the clarity or the punchy colours produced on the M8.

There’s a big difference in pixel count, but neither suffer from any obvious pixellation. Both use Gorilla Glass 3, making them equally as tough. Size, generally speaking, is something for personal preference, though it’s worth noting that the BoomSound speakers on the One Mini 2 means it’s a little taller than other phones with similar size screens. 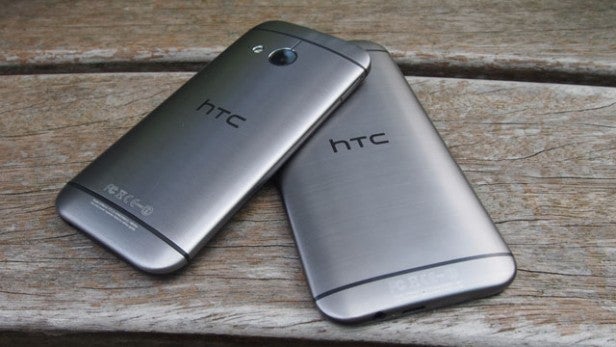 One of our biggest gripes with the HTC One M7 was the lack of expandable memory, particularly when the maximum internal memory capacity is a maximum of 32GB compared to the 64GB iPhone 5S. Buying the 64GB iPhone 5S, though, will cost you £709 directly from Apple.

The good news is that both now add microSD card support up to 128GB. Paying for those larger capacity microSD cards is not going to be cheap of course, but it is nice to finally have the option to choose.

HTC One M8 vs One Mini 2: Software, CPU and Performance

Running Android 4.4.2 and Sense 6 overlaid on top, this is arguably one of the sleekest skinned versions of Google’s operating system. Both have the vertical scrolling app draw and HTC’s Blinkfeed social feed, which weaves together stories and news from websites, Facebook and Twitter. The One Mini 2 does, however, miss out on Sense TV thanks to the lack of an IR transmitter.

It’s in the CPU and performance where the One Mini 2 suffers in comparison. The M8 has the advantage of running Snapdragon’s new 801 quad-core processor clocked at 2.3GHz, which is similar processing power found inside the Samsung Galaxy S5 and the Sony Xperia Z2, ensuring an overall speedy performance.

In comparison, the One Mini 2 has a Snapdragon 400 quad-core processor that’s nothing like as powerful. In the Geekbench 3 test it scores 1,120 compared to the 2,840 of the One M8, making the One M8 more than twice as powerful. This shows most in games, though in general use the One Mini 2 remains a generally snappy and usable smartphone.

The One Mini 2 also misses out on the new Motion Launch processor, which is essentially a low-power chip that monitors the sensors like the accelerometer and works with fitness apps like the integrated Fibit app. This is a small loss for anyone who likes to use such apps. 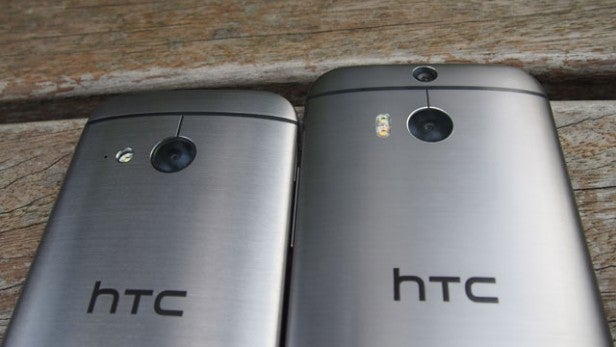 The cameras on the One M8 and One Mini 2 are very different. Not only does the One Mini 2 not have the dual-camera setup of the One M8, it uses a completely different sensor.

It’s a case of more megapixels versus larger sensor pixels for better low-light performance. The M8 has the duo camera setup with two sensors, two lenses and a 4-megapixel main sensor to help produce better low light shots and add the ‘blurred background’ effect using the second camera. The One Mini 2, however, has a fairly standard 13-megapixel camera and the same 5-megapixel front-facing camera included on the M8.

Both have their good and bad points. The M8 does render images better than the HTC One M7 and shoots the best results in macro mode. It has outstanding low-light performance, but still suffers from the some of the same exposure metering issues that might upset purists. The One Mini 2, similarly, excels with close-up macro shots and generates good quality HDR photos even in low-light conditions, but the colours it captures are noticeably flatter and less vibrant than the One M8.

You can see this in the sample shots below:

Automatic mode HTC One M8 vs One Mini 2 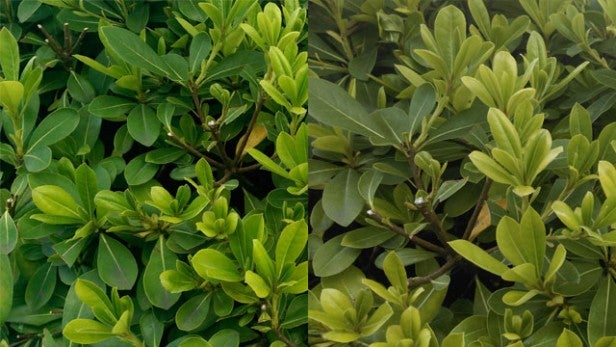 Automatic mode: HTC One M8 vs One Mini 2 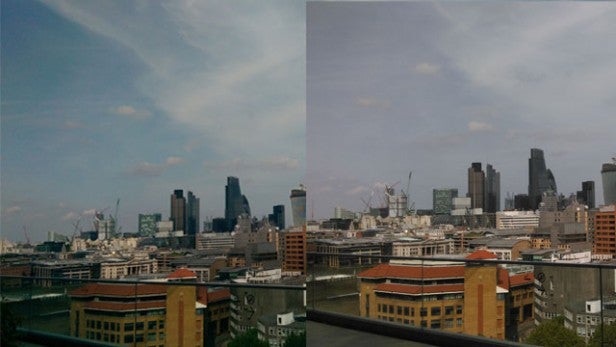 HTC One M8 vs One Mini 2: Battery Life

Unsurprisingly, the bigger M8 has the larger capacity battery to accommodate the greater demands on the components like the larger 5-inch screen.

Both can make it through a day and a half, especially when you’ve activated the raft of power saving-mode options. These will allow you to restrict screen brightness, turn off vibration key feedback, turn off mobile data and limit the CPU speed — all things that can help prolong the need to reach for the microUSB charging cable.

The M8 has the extra addition of an extreme power saving mode, which generates its own interface that only gives you access to core phone features like the phone dialler, SMS, email, calendar and calculator. This should only really give you a few extra hours, though, and is best used when your battery is running very low. 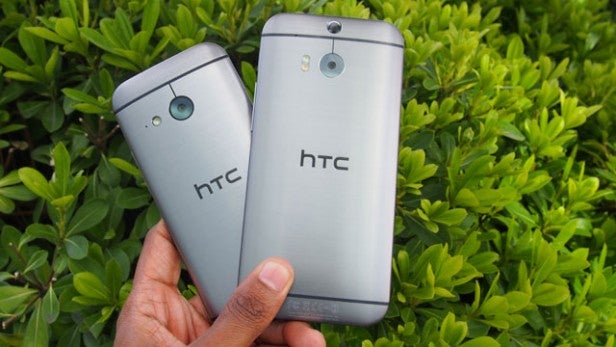 HTC One M8 vs One Mini 2: Which should you buy?

What this comparison shows is the One Mini 2 is by no means a ‘mini’ version of the One M8. They may look more or less the same, but there are a number ways it’s a cheaper, less powerful phone. If you want the absolute best then the One M8 is very much the phone to buy. This doesn’t make the One Mini 2 a bad phone, but this isn’t really and either/or situation.

If you do prefer the smaller dimensions of the One Mini 2, however, it’s a solid phone that performs well. It’s not the best value phone, however. For a phone of its size and features it’s not especially fast or well-featured, which is why it only scored a 7/10 in our full review. You could buy the Nexus 5 for around the same price, which is only marginally larger but much better overall.

Next, see our best mobile phones round-up or our Android 4.4 tips, tricks and secrets