With word of its aggressively low price tag and high performance, the Honor Play has the ability to appeal not only to gamers but anyone looking to pick up a handset that doles out a flagship-class experience across so many areas, without breaking the bank.

With games such as Fortnite making its way onto both iOS and Android, along with the success of Nintendo’s Switch hybrid home/portable console, mobile gaming has never been more popular (Snake on the original Nokia 3310 notwithstanding).

To meet this trend and satiate mobile gamers looking for a device to fit their needs, just as a PC gamer might look at the latest gaming laptops, a myriad of manufacturers have pushed smartphones into the market that promise to deliver the best mobile gaming experience around.

2017’s Razer Phone was, and perhaps still is, the poster child for the current gaming-focused smartphone market, but we’ve seen notable entrants such as Asus’ ROG Phone and Xiaomi’s Black Shark appear too.

All of these devices pack in flagship specs and some modern gaming styling tropes to better define their presence alongside more conventional high-performance smartphones such as the Samsung Galaxy S9, but all also feature a sizeable price tag.

That’s where the Honor Play comes in. It aims to deliver on two fronts. First, as another option in the gaming-focused smartphone market. And second, as an affordable flagship alternative that doesn’t skimp on hardware or performance, while boasting an aggressively low asking price, similar to the recently announced Pocophone F1.

At the phone’s European launch during the IFA technology trade show in Berlin, the company’s President, George Zhao, dropped word of just how low a price the Honor Play would pack when it hits the market; coming in at a seriously competitive €329 or £279 in the UK.

Editors Note: Due to the recent retraction of Huawei’s Android license, future Huawei and Honor phones won’t be able to access Google Play Services and as a result many Android apps including YouTube and Gmail. Both Huawei and Google have confirmed Huawei and Honor phones, like the one in this review, will continue to have access for this time being. Until we know more about the situation we’re leaving the scores on all our newer Huawei reviews, however as the situation changes we’ll revisit this.

If you’re familiar with gaming hardware, then you’ll know what I mean by ‘tropes’ mentioned earlier. When talking about PC towers or laptops, monitors, mice, keyboards and headsets you can expect a mix of textured plastics, aggressive geometry, brushed metal work, colourful LED lighting in every shade available and, more often than not, an intimidating name to go along with it all.

I’ve already mentioned Razer, and Xiaomi opted for ‘Black Shark’, but most gamers will also be familiar with computing sub-brands such as Legion, Predator and Omen, to name but three. 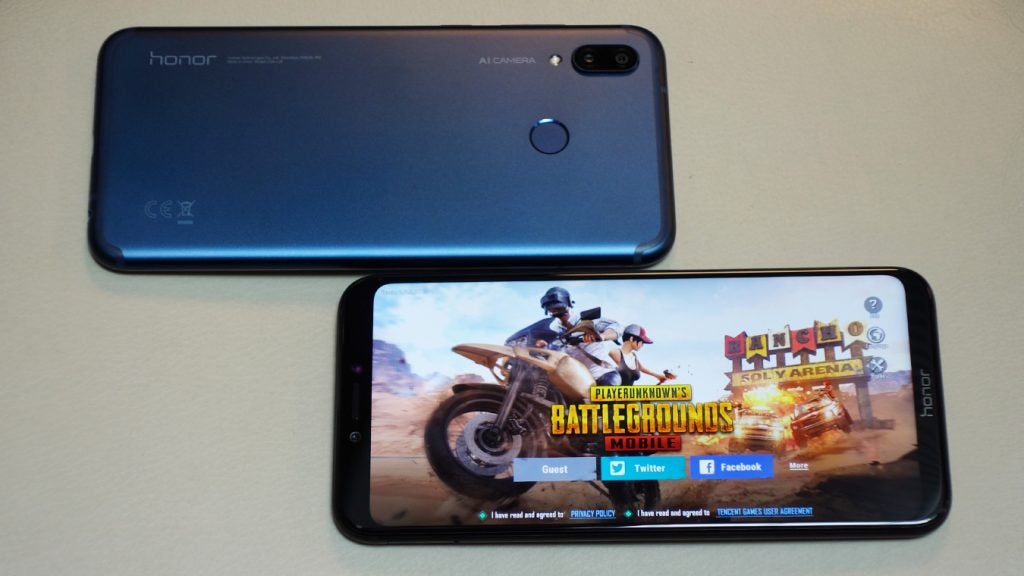 With all that in mind, it’s surprising then that Honor has opted to go down a more conservative path with the Honor Play’s design (and name).

The phone boasts a nicely rounded metal unibody, with a centrally mounted, gesture-capable rear fingerprint sensor. It also has a vertically aligned rear dual camera and a curved glass front that’s dominated by a sizeable display.

It’s an inoffensive remix of a design framework we’ve seen multiple times in Huawei’s and Honor’s past devices, but to the eye it doesn’t scream, ‘gamer. In fact, it barely whispers it.

In markets including the UK, options include a Midnight Black or Navy Blue variant, both of which are fine. The black is arguably the more brooding and characteristically ‘gamer’ in its aesthetic, but that’s more a matter of perception than intent.

That’s not to say the Honor Play looks or feels bad. On the contrary, the fit and finish appears to reach the same high standards we’ve seen from the company time and again in recent years, with little to complain about.

Honor claims to have opted for metal over glass – as it has on its flagship, the Honor 10 – since it’s more comfortable in the hand and better for heat dissipation. The latter is a more serious consideration when it comes to gaming on a phone, and while that notion rings true, it’s harder to accept that the Honor Play is easier to hold because it’s been rendered in metal.

Unless your palms are even remotely clammy, the Honor Play remains slippery and, as is the case with a glass-backed phone, this handset will still hold onto smudges and fingerprints. It’s far less of an issue on the Play than on a glass-bodied handset but it’s still a reality. 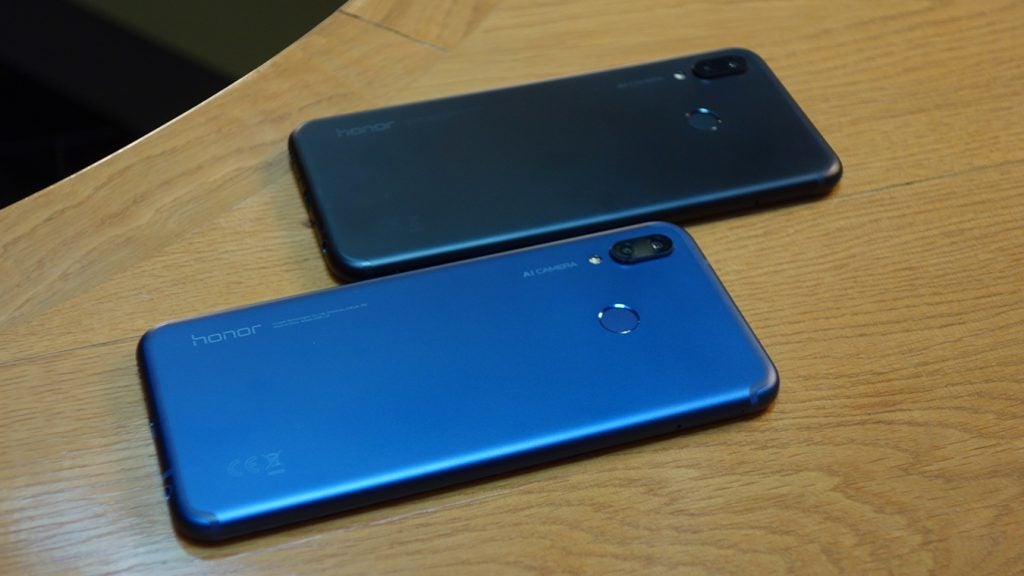 Thankfully,  the included TPU soft case offers a solution. It’s clear, so you can still admire the bodywork and colouring beneath, but it also offers far more grip than the bare metal body, not to mention improved protection from the get-go.

There are two big caveats to the underwhelming colour options of this gamer-focused handset. In Asian markets, where the Play is already available, Honor has launched far more exciting colourways such as Ultra Violet and Nebula Purple. I suppose we only have our apparently blander tastes to blame, as market research must have concluded that such options aren’t suited to European tastes.

Second is the matter of the Player Edition versions of the Honor Play. These two variants sport some of those ‘gamer aesthetics’ that the basic finishes lack.

Red and black accents plus laser-engraved backs give these phones far more flare – and, in my eyes, should have been the only versions of the Play to be released. Unlike the black and blue versions, they’re exclusively available on the Honor web store. In case you were wondering, the differences are only cosmetic.

Despite its large size, the Play is comfortable to wield in one hand. The metal hardware controls all sit on the phone’s right side, with the power key within easy reach. The volume rocker proves a little more of a stretch, however. There’s a USB-C port on the bottom, alongside a single loudspeaker and a headphone jack – a feature that gamers, in particular, will undoubtedly appreciate.

Placement of the loudspeaker is less than ideal, however. Not only is it a single driver, pushing out mono sound, but it’s all too easily obscured by your palm when holding the phone in landscape – which, if you’re gaming, is a likely occurrence.

From a technical standpoint, the only glaring omission compared to pricier devices is any form of IP certification. Dunking the Play in water is a definite no-no.

Those after a compact handset need not apply. The Honor Play is a big phone with a large 6.3-inch display. That’s only 0.1 inches smaller than Samsung’s latest phablet, the Samsung Galaxy Note 9.

In spite of this, the 19.5:9 aspect ratio means the phone still adopts a relatively svelte silhouette, and the software’s longstanding one-handed mode ensures that when you need to, you can quickly scale down the UI with a swipe across the on-screen navigation buttons. 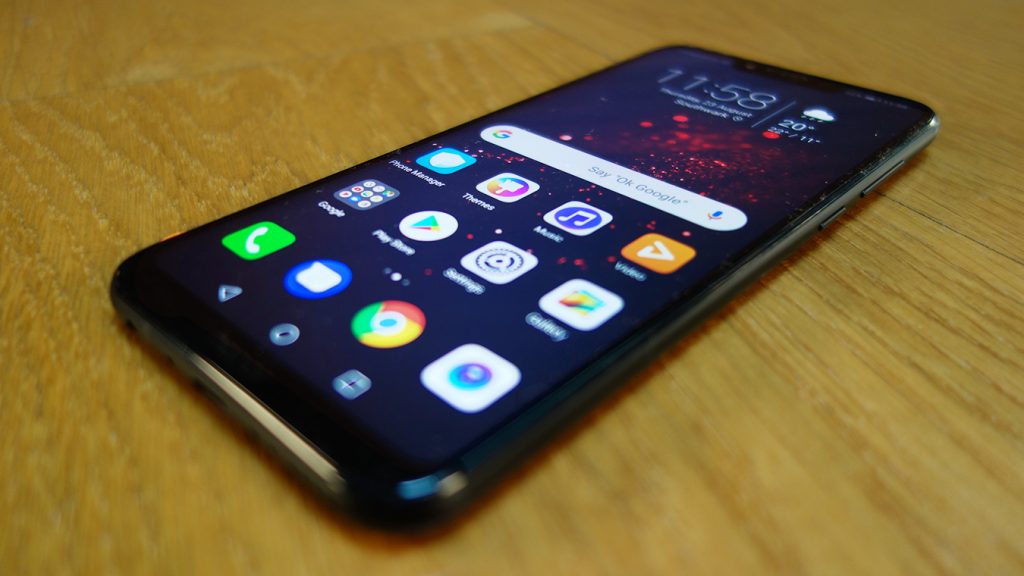 With the notion of affordability firmly in my head, I was expecting the actual viewing experience on the Honor Play to be a bit of a mess. However, against expectations, this panel exudes quality.

The extended Full HD+ IPS LCD is crisp and colourful. It isn’t the brightest panel around by any means, but you can enjoy media outdoors if you can cope with its reflectivity. Brightness drop-off is also a more significant concern if you’re looking at the screen off-axis.

Bevels: the rounded edges of the 2.5D glass (no mention of it being toughened Gorilla Glass, though) feel nice under-finger, and when gaming it’s a joy to glide across. Prolonged gaming sessions, where hands become warm or clammy, might result in less fluidity, but for that Honor is also selling a gaming-focused screen protector that promises to reduce drag. Unfortunately, I wasn’t able to test this particular accessory since it’s a market-dependant option.

Notch: note that the screen on the Honor Play does feature a notch. It’s larger than the one on the Huawei P20 but smaller than the iPhone X‘s. As such, there’s room for about four notification icons on the top right before they become obscured by it. Apps that aren’t designed to accommodate it might throw out misplaced UI elements, but a compatibility mode that scales affected apps back down to a more conventional 16:9 aspect ratio should take care of such instances.

Display controls: there are a gamut of display controls built into the Play’s software. The Eye Comfort mode is accessible from the notifications pane and offers up warmer colour temperatures to reduce eye-strain. There’s also a fine-grain colour mode and colour temperature customisation, plus an option to hide the notch amidst a black software bar.

A Smart Rotate feature will only rotate on-screen content based on the phone’s orientation relative to your face, which works as promised with pleasing reliability.