Last year Nokia leveraged the power of nostalgia as a means to garner sales for what seemed like an otherwise unremarkable feature phone by dressing it up as one of the mobile world’s icons; the Nokia 3310, and it seems to have worked.

For £45 you’re getting a 2G feature phone (although a 4G version of both the 3310 and Nokia 8110 are now available) that sort of, maybe resembles that first mobile you had some 18 years ago, which is… nice?

In the case of the 3310 that fleeting sense of recognition, as if bumping into a long-lost friend, quickly subsides when you realise that behind a mask of familiarity this is little more then money-spinning move by a thrifty marketing department.

If this device wasn’t called the ‘Nokia 3310’ then it would go up for sale in Carphone Warehouse or Tesco, sit on the shelf, with folk going about their business without a second thought. However, that name evokes memories and nostalgic feelings in almost everyone I know – but there isn’t really anything here of the old apart from the name.

Firstly, it only just looks like the original 3310. The iconic up/down button has been replaced by a tiny directional pad, plus the select button that was found below the screen is dismissed in favour of call send and end buttons that sit either side of the directional pad. 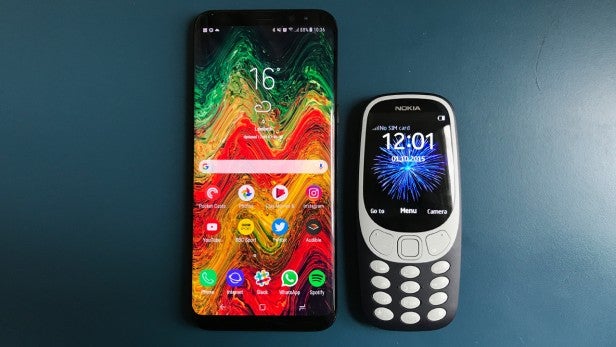 What you will recognise is the contrasting colour ring that snakes its way around the screen. The keypad is familiar, too, but it’s almost unusable as a result of the terrible backlight that makes the numbers and letters unreadable in anything but a pitch-black room. If you’re trying to recreate something, it would at least be wise to retain the bits for which the device was so well known – something Nokia appears to have missed.

The phone is made out of soft-touch plastic and it does feel nice to hold. It’s tiny – see the above picture of it next to a Samsung Galaxy S8 – and almost disappears into my pocket. Like the original 3310, the new device feels durable – although I was concerned about snapping the whole phone in half when I prised off the back panel to get to the SIM slot.

Obviously, the handset doesn’t have a touchscreen. It does have a colour panel, though, and all your inputs are via the T9-style keyboard.

Ah, the classic T9 keypad… What wonderful memories that must evoke, eh? Nope, it’s terrible. There’s nothing good about going back to this method of typing; it’s simply a pain.

The screen itself is fine. It’s heavily pixellated, being a 2.4-inch 240 x 320 panel, but the big icons and text on the Symbian (seriously) software make that a non-issue.

The phone is fast, too – unless you’re browsing on Opera, where it’s eye-gougingly plodding and requires so much scrolling. In truth, you’re not going to be using the browser.

There’s no 3G, no Wi-Fi, no GPS, but there is a sort-of app store with a few apps available. From the 16MB of internal space on offer, only a few megabytes is accessible though, and so this will quickly fill up with only a few pictures or a single, really poor-quality MP3 file. The microSD card slot comes to the rescue here, and you’ll probably want to pop one in. 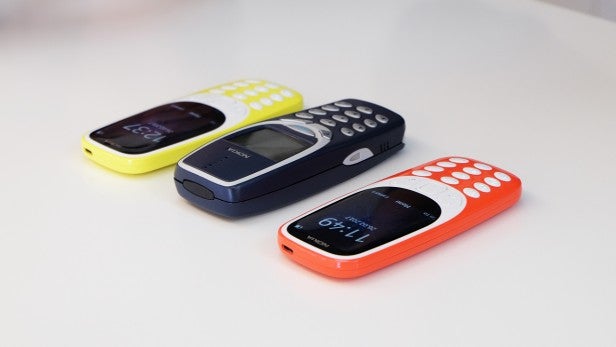 The original 3310 next to the new model

I can live with no Wi-Fi, but the lack of 3G is just nonsense. This is fine for a £20 phone such as the Nokia 150, but not so much for something costing £50. It means you’re stuck if you’re on the Three network. It also means it probably won’t work in the US.

You’re also restricted to two modes of communication: voice calling or text. I hardly send text messages to folk nowadays, which seems to be the same for everyone I’ve asked. If you use this as a festival phone, you won’t be able to join in your friends’ WhatsApp group, and there isn’t an easy way to access Facebook Messenger – one of the most popular messaging services in the world. SMS texting feels restrictive and old-fashioned.

There is Bluetooth, and you can load up a microSD card with some music and connect a pair of wireless headphones. That’s about as high-tech as this phone gets.

While I’m aware that this isn’t supposed to be a smartphone, it would have been smart to find a way to include apps such as WhatsApp and Messenger, creating a classic-feeling phone with modern services that most of us take for granted every day. Instead, Nokia has tried to modernise the look of the phone – which has ultimately backfired – with the software stuck in the past.

Make no mistake, this phone isn’t being aimed at those who want a properly basic experience. Those people are taken care of by the aforementioned Nokia 150, which has everything the new 3310 has and costs less than half its price. I completely understand if you want a phone to stick in a cupboard and pull out for emergencies, but Nokia isn’t looking at those people with this phone either. It’s aiming at hipsters. It’s marketing the 3310 as an accessory.

And as much as I dislike the approach, it’s been a success. Carphone Warehouse and Vodafone – the two places stocking the phone – were seemingly out of stock for a significant amount of time, and when the 3310 was first unveiled at MWC, it drew more attention than the LG G6 and Huawei P10. It transcended typical tech sites and became mainstream news, something that we now only see when Apple releases an iPhone.

Nokia’s other new 2017 phones – a raft of nice-looking, Android-toting mid-rangers – barely received a mention. Everyone wanted a piece of the 3310, and Nokia/HMD did a fantastic job of pushing it. 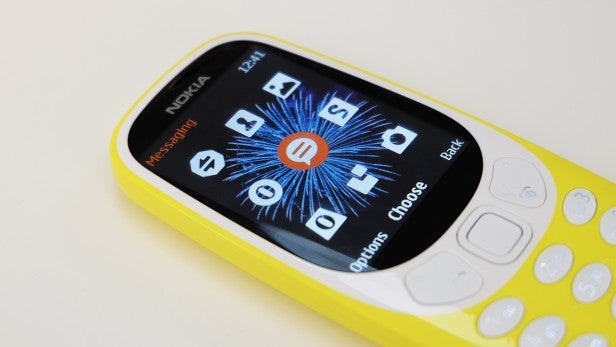 The biggest crime the Nokia 3310 commits is its shocking remake of the original mobile game, Snake.

This isn’t Snake as you remember it. Instead, developer Gameloft has tried to modernise it with colours, multi-directional movement and an almost Pac-Man art style. But in the end, it’s disappointing.

Why not just recreate Snake as it was? I have no idea. 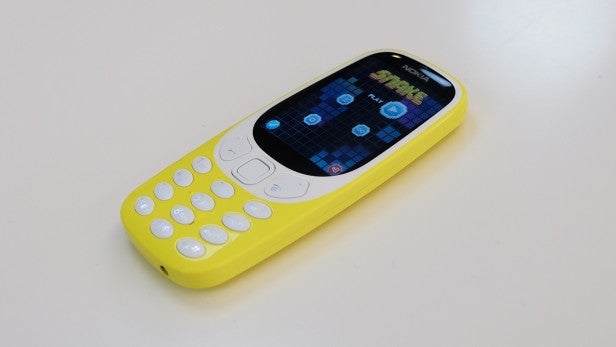 There’s absolutely no reason for this phone to have a camera. Nokia would have been better off ditching it and taking some money off the RRP.

The 2-megapixel sensor here is supposedly better than the VGA one in the Nokia 150, but I wouldn’t call what it produces ‘photographs’. They look like smudges of colours on a background, and they’re virtually impossible to get off the phone.

However, the battery life is probably the only real reason anyone should buy this phone. No smartphone can last weeks – most barely make it through a few days – without needing a top-up, but the 3310 can comfortably last seven days of use, and Nokia says it will live for a month on standby. Sling this turned off in a drawer and the likelihood is that it will have some battery life left whenever you need to pick it up. 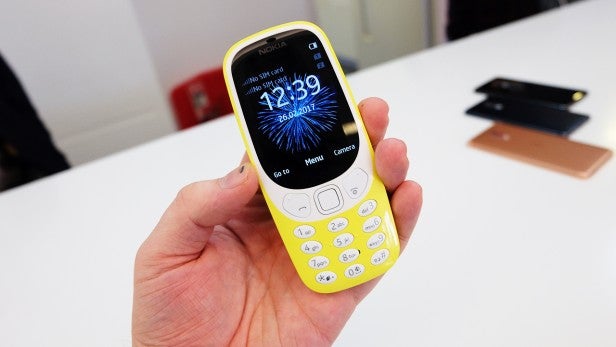 If you’re already thinking about buying a 3310 then you’re unlikely to listen to my words telling you not to. This device has already proven to be a huge seller; at £50 it appears to be the perfect nostalgic impulse buy. You’ll probably never use it, but the kudos you’ll get from playing Snake in the corner of a Shoreditch pub will make that irrelevant.

The truth is that this is nostalgia repurposed poorly. The original Nokia 3310 was my first phone and I truly loved it, but Nokia has removed what made that phone so special; the new 3310 feels like a marketing department’s ploy to get Nokia back on the map.

It has ruined Snake and missed the opportunity to create a modern phone in a retro body. This could easily have been something special, but as it is, it couldn’t be further away from that.

If you actually do want a bargain device then the Nokia 150 is identical to the 3310 feature-wise and costs only £20. Vodafone even sells an Android phone for £15, the Smart First 7, which is very limited but at least has modern app support and 3G connectivity. Or £50 will buy you a range of Android phones from Carphone Warehouse, all of which have much more going for them than the 3310. Spend £20 more and you can bag a Moto E, which is a decent budget device.

Avoid the hype – this is nostalgia exploited in the worst way possible.