After the popular game’s release on iOS earlier this year, fans have been eagerly anticipating Fortnite‘s eventual release on Android. However, now that it’s here it seems many lower-powered Android handsets are struggling to run the resource-intensive game.

Fortnite is distinctly different to many games found in the Android family since it circumvents the Google Play Store and is available exclusively through the Epic Games website.

It’s a strange move, which some are speculating is Epic’s way of avoiding paying a portion of its revenue to Google (a side-effect of Play Store purchases).

Epic Games confirmed on August 9 that Fortnite for Android would initially be available on the Samsung Galaxy family of devices. Samsung Galaxy Note 9 and Galaxy Tab 4 owners will also be granted access to an exclusive in-game skin.

As mentioned above, the game will not be available on the Google Play store, which is how you get access to 99% of the apps available on Android. Instead you’ll have to register on Epic Games’ site and manually install the APK that’s emailed to you.

If you try and search for the game on the Google Play store, you’ll see a message telling you that it’s not available. 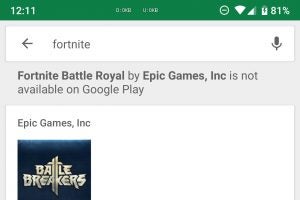 Epic Games confirmed during its recent Samsung Unpacked Presentation that the Fortnite Android beta will be available across the family of Samsung Galaxy devices including the Samsung Galaxy Note 9 and the recently released Samsung Galaxy Tab 4. Owners of the latter two devices will gain access to the ‘Galaxy’ outfit in Battle Royale.

Samsung got a weekend of exclusivity, but that came to a close on the evening of Monday 13 August. Now the beta is available to download on a number of compatible, non-Samsung devices.

The compatible devices at launch as as follows:

Some of those who had registered via the Epic Games website will now be receiving invites to download the beta on to their Android phone. Epic Games has confirmed that the Android release will feature cross play and cross progression between Xbox One, PC, Nintendo Switch, Mac and iOS.

Now that Fortnite is available on a wide range of Android phones, we’re starting to see how the software holds up on devices with much more modest specs — and the results aren’t great.

It’s particularly bad if you’re running the game on a handset with 4GB of RAM or less, which covers a large majority of the smartphone market.

Sure, if you’ve got a gaming-focused device like the Razer Phone − which comes with 8GB of RAM − then you might not have any issues, but devices like this are in the minority within the Android market.

That said, even Samsung’s high-end devices are reportedly struggling to run this very resource-intensive release.

Of course, with the game still technically in beta, problems like this are to be expected as Epic Games developers iron out the kinks and move towards a full release, whenever that may come.

Have you had a chance to play Fortnite on Android? What were your experiences? Let us know @TrustedReviews.