If you liked the look of the Huawei P20 Pro, but didn’t fancy the price, then the Honor 10 is a solid alternative. It packs the same Kirin CPU as the P20, has an excellent FHD+ screen and a premium design that makes it look and feel way more expensive than it is.

If you liked the look of Huawei’s uber-swish, triple-camera-packing P20 Pro, but didn’t fancy the £600-plus price tag, then the Honor 10 may well be the phone you’re after.

The Honor 10 is a baby Huawei P20 aimed at the £400-500 mid-range phone market. It follows the same tried and tested pattern as the Honor 9, stripping the more expensive aspects of Huawei’s current flagship, while retaining its core design features and hardware to offer a great-value smartphone. 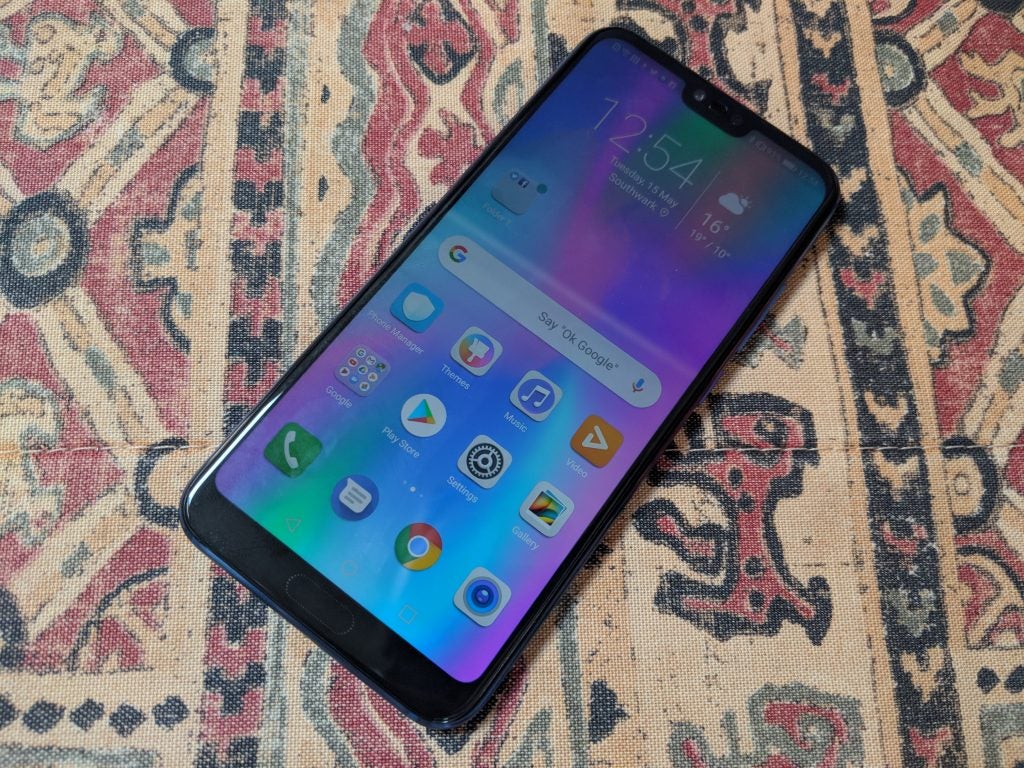 The strategy worked a treat on the Honor 9, which was one of 2017’s best mid-range phones – and it generally still works out for the Honor 10. This phone has a pretty, albeit slightly flashy, mixed metal and glass design, a top-end Kirin CPU and solid battery life.

The only real downside is its slightly buggy EMUI software. However, that’s forgivable given the Honor 10’s cost – you’ll still struggle to do better for the money.

Honor made a huge deal about the 10’s design during its London launch. Specifically it claims to have achieved the super-polished, ridiculously blue finish by stacking more than 15 layers of glass over each other.

But outside of the ultra-bright colouring, the Honor 10 has a similar mixed metal and glass design to pretty much every other flagship to arrive this year. The phone has metal sides and a shiny 2.5D glass back; were it not for the Honor branding, it could easily be mistaken for a Zenfone 5 or LG G7 ThinQ.

It also has the same ‘notch’ that’s become increasingly common since Apple launched its iPhone X. This is a consequence of the phone’s near-bezel-free design. The notch is a rectangular bump breaking up the top of the screen, where the phone’s front camera is housed.

Android P is set to support using the screen around the notch, but as it stands Honor’s set it to display incoming notifications as well as battery life and network availability. Those who wish to can also turn it off in the phone’s settings leaving a plain black bar.

The only minor difference to those other notched phones is the appearance of a 3.5mm socket, and the absence of a rear-facing fingerprint scanner. Instead Honor’s baked the scanner into the home button just under the screen.

Lack of originality aside, the design is solid and ticks all the right boxes when it comes to functionality. It gives the phone a much more premium feel than your average £400 handset. 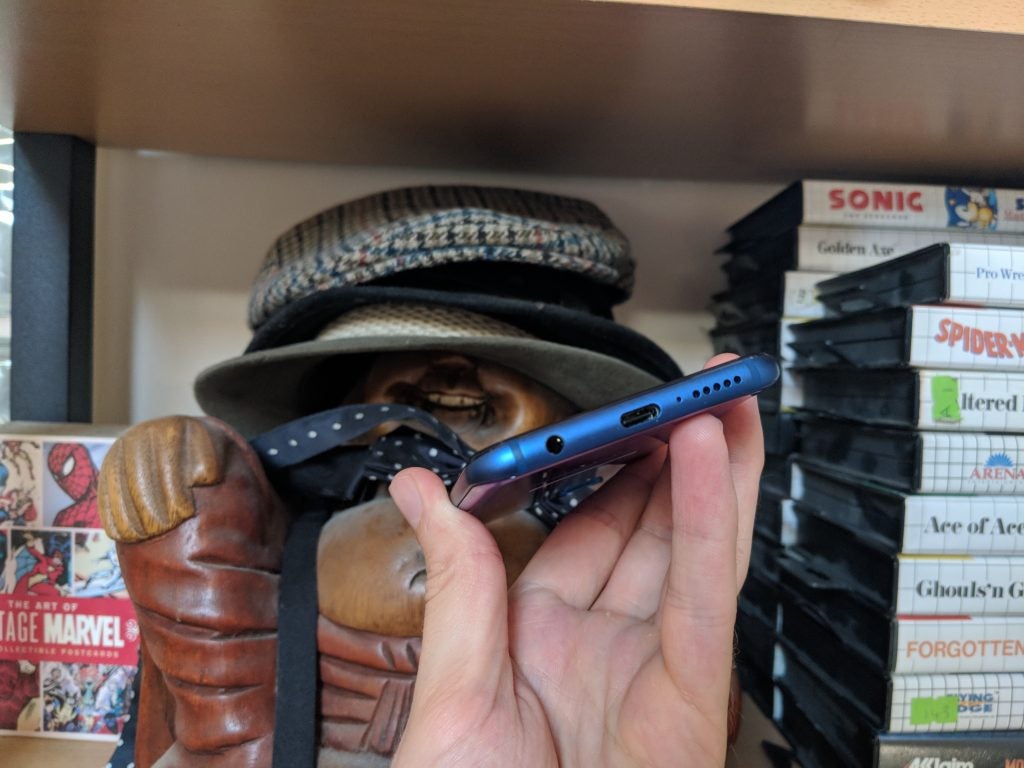 Build quality is excellent. The glass back has zero give and a seamless, slightly curved join to the metal sides that makes it comfortable to hold. The bottom fingerprint scanner is also wonderfully reactive, though take Honor’s claims of it being an in-screen scanner with a pinch of salt. The scanner sits at the phone’s bottom, in the same location as the home button. The only difference between it and past handsets is that it’s actually under the glass. It’s also a less essential addition since the Honor 10 has a reliable face unlock feature, which lets you open the phone simply by looking at it after registering your identity to it.

My first issue with the phone’s design is that, like all glass-backed phones, it’s an outright smudge magnet. Within minutes of taking the phone out of the box it was covered in marks. I’m also nervous about dropping it. Though it feels solid, I don’t trust any glass-backed phone to survive even a minor accidental drop scratch- or crack-free without a case.

The more serious issue I have with the design is its slightly lacklustre speaker. This sits on the phone’s bottom and, like most standalone units, is at best functional and a far cry from the boombastic dual-driver setups you’ll find on things like the Razer Phone.

It’s just about good and loud enough for watching the odd YouTube clip and playing a round of PUBG. But max volumes are noticeably lower than on most competing handsets. The low end is also fairly weedy.

Going beyond skin-deep, the 128GB of internal storage will be more than enough for most users. 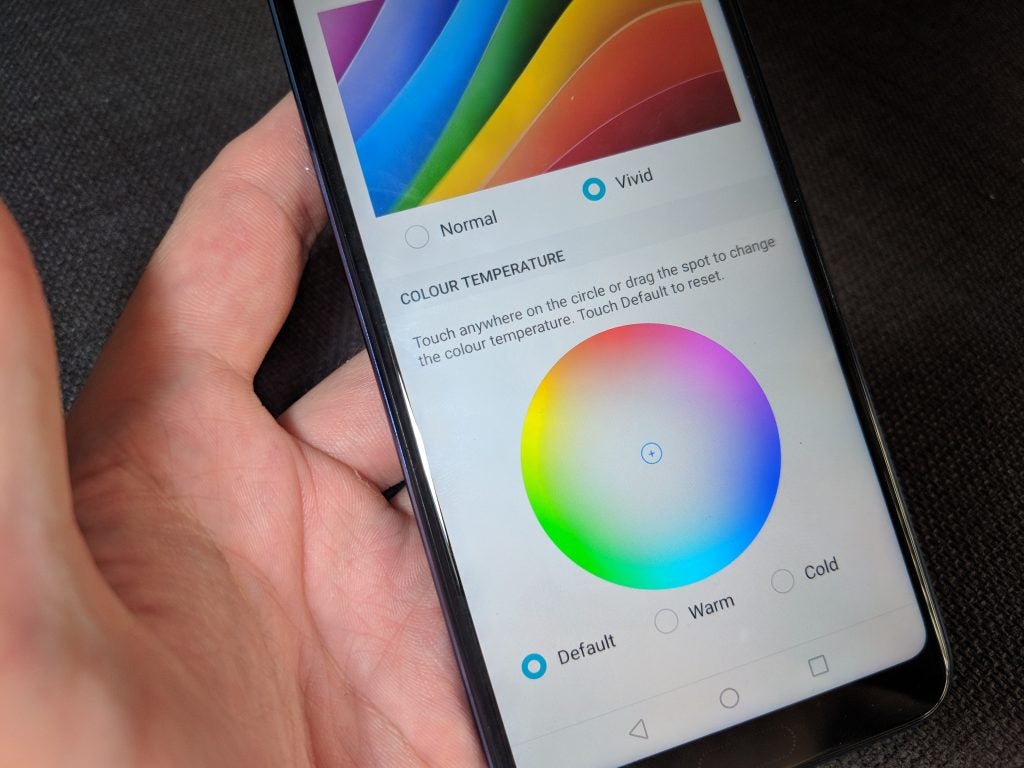 The Honor 10’s 5.8-inch IPS display is one of the best you’ll find at this price. Blacks aren’t as deep as on competing AMOLED screens, but colours are nicely calibrated and whites are pristinely clean. Holding it next to the Pixel 2, the Google phone’s whites were horribly yellow by comparison.

Those who prefer cooler or warmer colours can also tweak the colour temperature and contrast in the phone’s settings, though by default I kept it in the out-of-the-box Vivid mode.

Max brightness levels don’t match the quoted 1000 nits brightness of LG’s flagship G7 ThinQ and the Honor 10 isn’t Mobile HDR certified. However, at this price you’ll struggle find a handset that does either, and the screen is more than bright enough. On a sunny day in the park the screen remained legible in everything but direct, very bright sunlight.

The HD+ 2280 x 1080 resolution isn’t noticeably higher than regular FHD, as it’s mainly a move to accommodate the phone’s longer 19:9 aspect ratio. You can get higher-resolution phones at this price point, but I never had any issues with it. Text and icons uniformly look sharp and are readable and in general I had no issues with the Honor 10’s display.

I’m a little less enamoured with the software, however, which I cover in detail on the next page of this Honor 10 review.