A year on and the Pixel 3 is still a great phone. However, that's mostly down to the photos. The poor amount of RAM has reared its head and with the Pixel 3a offering just about the same camera skills in a much cheaper phone it's a hard sell. We're also eagerly awaiting the Pixel 4, which looks set to pack an extra camera on the back, smoother display and plenty of new shooting modes. Still, if you can find it for a good price we're happy to continue recommending the Pixel 3 for its camera and low-light shooting alone.

What is the Google Pixel 3?

We’re in the midst of reviewing the Pixel 4 devices, but for now continue reading for our Pixel 3 review.

Google Pixel 3 design – Much improved and a great small phone

Previous Pixel devices haven’t been great lookers. They’ve been functional rather than fashionable; durable rather than delicate. The Google Pixel 3 is the first entry that feels like a match for big boys like the Samsung Galaxy S10 Plus.

From a distance, and especially in pictures, the Pixel 3 looks just like the Pixel 2. Pick it up, hold it and then you’ll notice the difference. 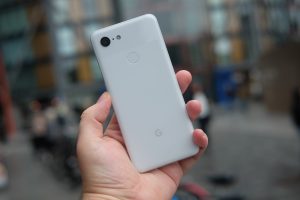 The back is smooth, constructed completely out of glass and almost soft to the touch. It has the finish of a heavily polished pebble and slips comfortably into your palm. Instead of just putting glass on the back and stopping there, Google has split the look of the glass: the top portion is shiny, with the lower area matte.

I love the matte finish here – it’s most noticeable on the white and pink versions – as it reduces smudges and adds some of the grip often lost when glass is switched to metal. It does make the device scratch very easily though.

This is still a slippery phone, especially if you’re coming from a Pixel or Pixel 2, and being glass means it is less resistant to drops. Switching to glass also allows Google to introduce wireless Qi charging and it helps retain the IP68 water-resistance rating.

A USB-C port is the only connection here – there’s no 3.5mm headphone jack – and that’s flanked by a SIM card tray. Along the right hand side there’s a clicky volume rocker and power button that, on my white version, has a contrasting mint colour. 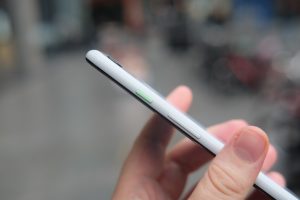 Having all the buttons on one side isn’t for me and I much prefer having the lock switch on its own as it means you don’t accidentally alter the volume when you want to turn the phone on.

Flip the phone over and you’ll notice the biggest difference between this and the Google Pixel 3 XL – the screen. Aside from being smaller (this has a 5.5-inch display, as opposed to a 6.3-inch one), the Pixel 3 doesn’t have the deep notch cutting into the display. Instead, it’s an 18:9 panel with a thinner border running around it than the Pixel 2. This makes it feel a lot more modern and so much better looking.

This isn’t a completely edge-to-edge display though, as two front-facing speakers sit above and below the display. You’ve also got dual selfie cameras too. 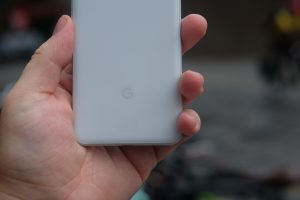 A 5.5-inch screen might sound intimidating if you’re used to the older Pixels (both had 5-inch screens) or an iPhone (typically with a 4.7-inch screen) but thanks to the slimmer bezel the Pixel 3 is just about the same size overall as those two phones. It’s comfortable to use in one hand and small enough to slip into the pocket of tight jeans or a handbag. I’d say it’s the perfect size for a phone.

At 5.5 inches, the screen on the Pixel 3 is the biggest of the non-XL Pixel phones. It’s also the best.

This is a perfectly crisp, detailed panel and one that wouldn’t be much better with a higher resolution. 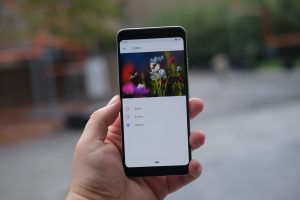 Viewing angles are excellent and there’s enough oomph in brightness to see the screen outside. To my eye it’s not the brightest display around though, and you’ll probably find yourself manually altering the brightness levels a lot more than, say, with an iPhone.

Google is going for an accurate representation of colours of the screen of the Pixel 3 and there’s noticeably less saturation in reds and green than you’ll find in a Samsung phone. You can tweak the screen setting slightly with Boosted, Natural and Adaptive options available. Adaptive is the default and I haven’t felt the need to change it.

A very obvious theme ran throughout Google’s unveiling of the Pixel 3: specs were barely mentioned. Its thinking is that the software optimisation and how things work are far more important than flashy numbers and huge amounts of RAM.

If you are interested in the internals though, here’s a quick rundown: Snapdragon 845, 4GB RAM and 64GB of non-expandable storage with a 128GB model available for £100 extra. It feels a bit meagre in comparison to other 2019 phones.

The 4GB is the biggest issue with performance and I hope there’s at least 6GB in the Pixel 4. 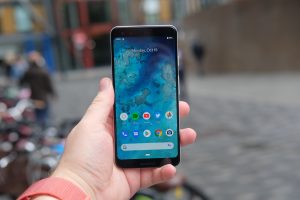 This thing is fast, churning through everything I can throw at it without lagging or feeling bogged down. Games play smoothly and open as fast as any other Snapdragon 845 phone. It is, however, slower than the iPhone XS when opening the same game or app – but then comparing iPhones and Android phones is virtually impossible as there are so many different factors.

See the below charts for performance in synthetic benchmark tests. 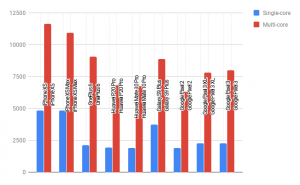 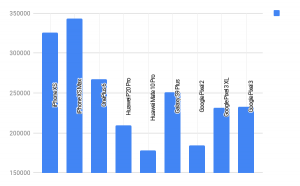 Audio: quality from the stereo front-facing speakers is truly excellent. As the sound is aimed towards you, it’s not blocked by hands when you’re watching a video and Google Assistant queries can easily be heard across a room. There’s no headphone jack here, but Google does include both a 3.5mm headphone jack adaptor and a pair of perfectly fine USB-C earbuds in the box.

These earbuds look a lot like the Pixel Buds from last year and they boast some of the same translation functions too. There’s Bluetooth 5 support too, if you’re more a fan of wireless headphones.

Haptics: a feature often forgotten about on Android phones is haptics: that vibration buzz you get when a message or call comes through. The vibration on the Pixel 2 was very weak and the one used here is a big improvement. Google seems to know this and as a result you’ll get a lot more small haptic responses throughout the OS. There’s one when you pull down the notification panel and another when you flick through apps.

Security: with lots of other phones switching to the face unlock systems, it seems a bit odd Google is holding steadfast with fingerprint authentication. The rear sensor is ridiculously fast and I would take this any day over an in-display option that doesn’t work to unlock apps, but some form of face unlock would have been nice.

The Google Pixel 3 runs Android 10 with the Pixel launcher on top, and it’s the best software experience on any Android phone. It’s certainly missing some features; a deep and customisable battery-saving mode being the most obvious to me, but the general experience is fantastic. Android 10 brings handy features like dark mode and new gestures for navigating around the UI.

The UI is clean and simple; fast to navigate and never overbearing. There’s the essential Google apps pre-installed and absolutely nothing else. As a user of Google services, the way everything works and syncs together is nothing short of fantastic.

Google Photos remains the single best way to back up and store snaps, with the Pixel 3 offering unlimited full-resolution uploads to the cloud.

Pixel 3-specific features are kept to a minimum, and the majority of them are not yet available or restricted to the US. There’s a call-screening feature, for example, now available to certain people in the States, which will use Google’s Duplex AI to actually answer spam calls for you. I’ll be sure to try this out when it comes to the UK.