Google’s new Daydream View VR headset got a blink-and-you’ll-miss-it unveiling at the Pixel 2 event in October.

This isn’t much of a surprise, as mobile VR hasn’t had a massive year. Samsung sort of updated its Gear VR and a few mobile-free headsets are coming out before the end of the year, but it seems like the bubble may have already burst.

Having used the new Daydream View for a few weeks, it’s not hard to see why. This is a perfectly decent headset for a few throwaway VR experiences, but the higher starting price and minimal upgrades make it far from vital.

Google’s changes for the second-generation Daydream are minimal – so much so that’s it hard to tell what’s different until you pick the new version up.

The slouchy, jogging-bottom material that covered the first headset has been replaced by a tougher, harsher fabric. It’s probably a good move, considering how easily the original soaked up sweat during long periods of playing.

Another addition is an extra strap that goes across the top of your head. This helps spread out the weight of the headset, but I didn’t really find it heavy in the first place. Having the extra option there is nice, though. 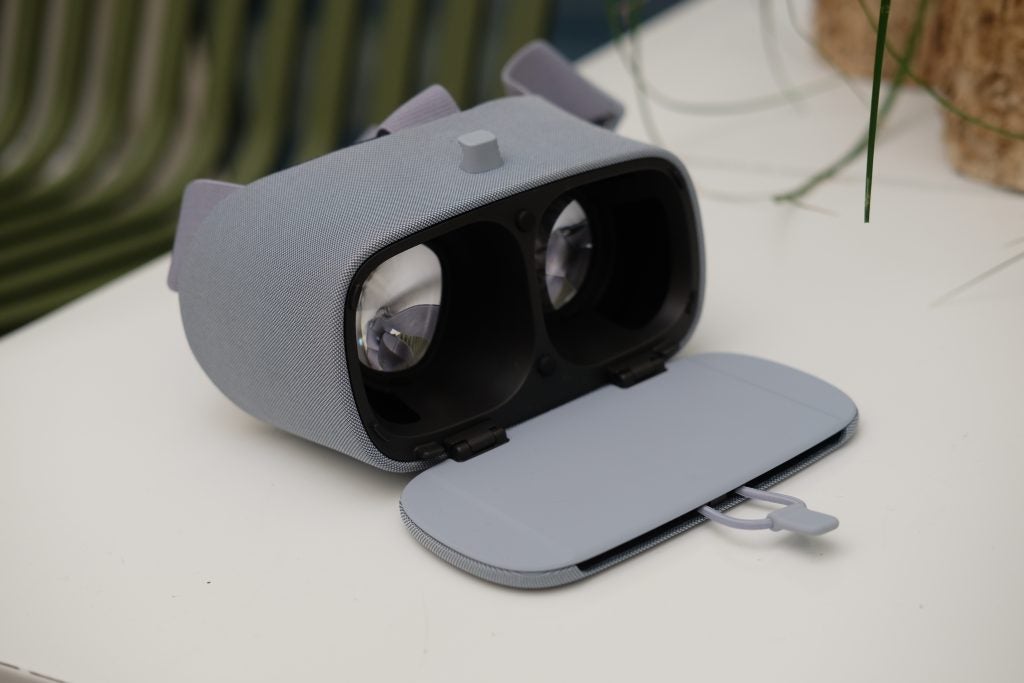 The minimal use of plastic and emphasis on fabrics makes this a comfy headset to wear, but you will have to fiddle around with the straps unless you want it to feel really, really tight.

A big design shift from the original models is in the visor. This used to have a small divot inside to hold the remote – a handy touch – but that’s been ditched here. Instead, the visor now has some vents to disperse heat. One of my biggest annoyances with the first Daydream View was how often phones would get super-hot when inside, but that’s not so much of an issue anymore. Phones still get warm to the touch after lengthy play sessions, but not as much.

Setup for Daydream View is ridiculously simple, with no fiddly plugs to connect, or slots into which you need to precisely place your phone. Simply unclip the front portion of the headset and drop in a supported phone.

The headset connects via NFC, and it proved a smooth process that worked consistently. You’ll need to make sure you have the Daydream app, and have all the necessary updates installed.

When the Daydream platform was first unveiled in 2016, its biggest downside was the lack of compatible phones. Initially, it only really worked with the first duo of Pixel devices and not much else. 12 months later, the story is very different, with plenty of phones supporting the headset. You’ve got the Pixel 2 and Pixel 2 XL, Samsung Galaxy Note 8 and S8 along with flagships from Asus, ZTE, Motorola and more.

There’s still no support for iOS devices, although that’s hardly a surprise. 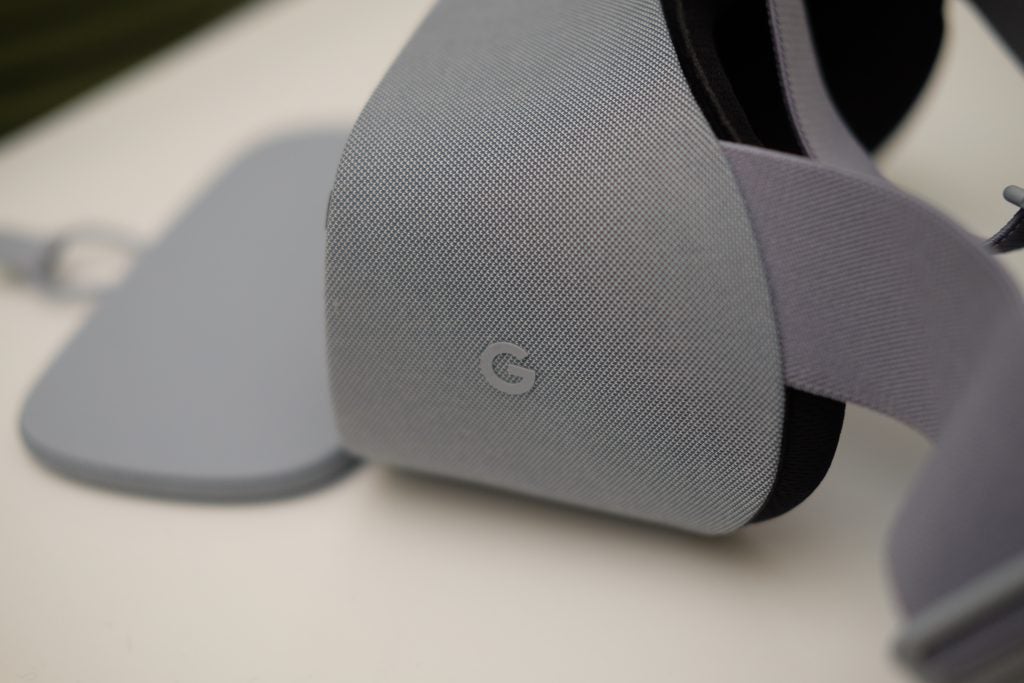 Google’s official documentation details the required specs for a ‘Daydream Ready’ phone, and they’re still the same as before. It will require Bluetooth 4.2 LE and a screen size of between 4.7 and 6 inches that boasts at least 1080p resolution at 60Hz, plus a <3ms latency and <5ms persistence. It will need to decode two instances of 60fps video simultaneously and be capable of 60fps rendering.

The biggest required spec, though, is an OLED display, meaning any phone with an IPS LCD panel – LG G6, HTC U11 – is off the list.

When the phone is connected, both the 3.5mm jack and USB Type-C port will still be exposed, so you can plug in some headphones and keep the phone charged. However, you’ll need a very long USB-C cable for this to actually be a viable option.

A VR headset lives and dies by its content. Thankfully, Google has attracted a number of high-profile apps and devs to the platform, so there’s plenty of stuff to do with your Daydream View.

Videos apps like Netflix and YouTube are here, plus Hulu and a load of American sports services.

The game selection hasn’t grown too much over the past year, but it still has some decent experiences. Need for Speed: No Limits VR is kind of ugly, but fun, and GunJack 2 is fast-paced. You probably won’t be playing these for hours, but do you with any VR content?

The Daydream UI adopts the cartoony style that looks at home in VR, with a sleek-looking landscape covered in apps and options. You navigate with the remote and there’s direct access to the Play Store for downloading further apps without removing the phone.

If you’re coming to the Daydream View expecting a VR experience comparable to the Oculus Rift, HTC Vive or even PSVR, then you’re likely to be disappointed. Those headsets cost hundreds of pounds, being powered by pricey hardware. The Daydream View, on the other hand, is a £99 headset that will be powered by a range of phones with slightly differing specs.

My experience so far – using Pixel 2 XL, Samsung Galaxy S8 and Moto Z2 Force, all with quad-HD displays – has been very positive. However, it continues to suffer from the same issues as other mobile headsets. 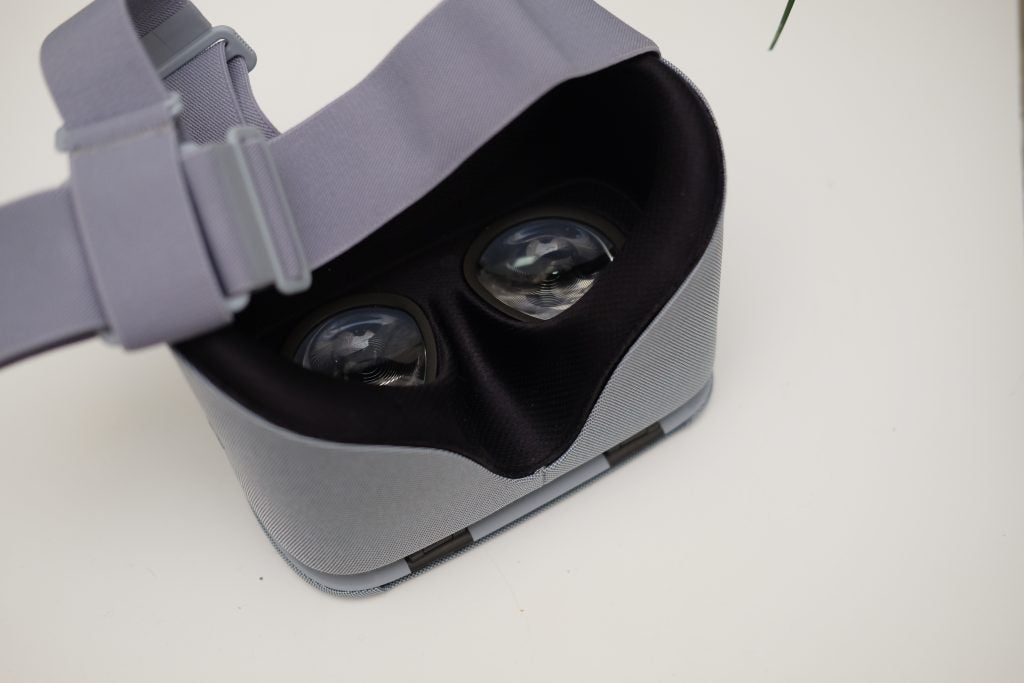 While we’ve come to expect our phone screens to be crisp and pixel-free, this isn’t the case with VR. Pixels are easy to spot and details can be jagged, which leads to content sporting a very cartoony look in an attempt to combat such issues. You’ll notice this even more if you’re using it with a 1080p screen.

It’s less noticeable in apps. Wonderglade is a cartoonish game, centered around classic theme park titles, and Hunters Gate is a monster-hunting RPG; both feel less limited by the resolution.

Aside from the small design tweaks, the biggest upgrade for this version is the lenses. They’re now Fresnel lenses with wider viewing angles, just about matching the latest Gear VR, but they’re not quite as crisp as before. This does make things look a bit fuzzier, but personally I would accept the trade-off and take the wider-lenses.

Latency isn’t an issue either, and movements you make with your head or the controller are almost immediately replicated on the screen. The low latency, combined with a smooth frame rate (in the games currently available; this could, of course, change further down the line) help make the Daydream View comfortable to use. I haven’t felt sick or nauseous while playing so far.

The controller was one of the best things about the original Daydream View, and it’s exactly the same here. It pairs via Bluetooth and slips into the back of the head-strap when not in use. It’s used for everything from navigating the menus to controlling your character in-game. It’s responsive too – and can be mirrored virtually in the headset. 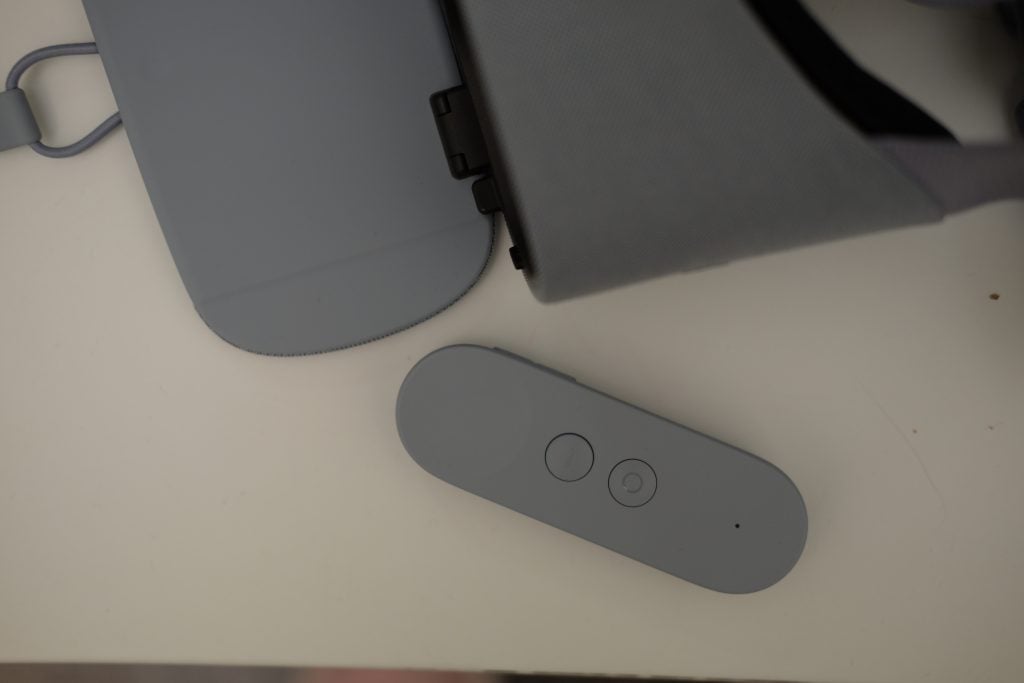 There’s a small responsive touchpad on the top, volume buttons on the side, and a button for ‘select’ and ‘menu’ functions on the face. A USB-C port on the bottom is used for charging, and you can use the same cable that comes with your USB-C phone.

Slightly wider, fuzzier lenses aside, the VR experience here isn’t much improved. That’s fine, but it means that this headset is best used for short, throwaway experiences. I handed the headset to a few family members to try, and while they enjoyed it as a first experience of VR, I doubt they’ll be picking it up again in a hurry.

If you have a compatible phone, a spare £99/$99, and a yearning to get a first taste of VR, then the Daydream View is a decent buy. If you have the version from last year, I wouldn’t really recommend upgrading.

It’s a comfortable headset that looks good and has a developing library of content. It also has a great remote that makes playing games and navigation easy.

The Daydream View isn’t for someone intent of full-on VR – it’s more for those who will pass it round the table at family gatherings. It’s bite-sized VR, and it’s best to know this before jumping in.

A comfortable, easy-to-use headset – but not a huge leap forward.