Introduction
There are driving sims and there are arcade racing games, and never the twain will meet. On the one hand you have the likes of Gran Turismo 5, Need for Speed: Shift and Forza Motorsport 4, where the emphasis is on delivering a real driving experience, believable physics, real-world cars and real-world tracks. On the other hand you have the likes of Ridge Racer 6, Burnout Paradise and Need for Speed: The Run; games where the focus is less on accuracy, and more on fast cars, cool tracks and cheap thrills. Sure, some games sit nearer the dividing line than others, with Test Drive Unlimited and Project Gotham 4 falling vaguely between the two camps, but most of the time it’s pretty clear where any racing game lies. 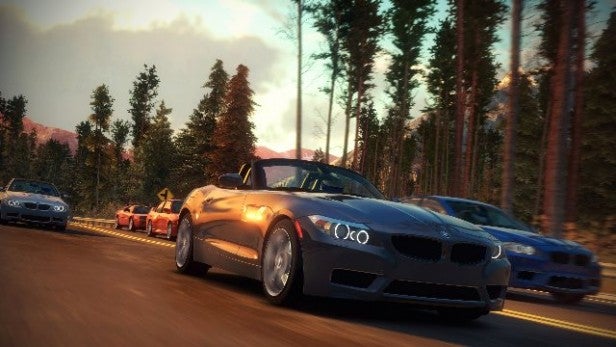 Forza Horizon, however, challenges the status quo. In its head it’s still a driving sim, with real-world cars and realistic handling powered by the same potent graphics and physics engines that Turn 10 deployed in the mighty Forza 4. In its heart, however, it’s a descendent of Need for Speed, Test Drive Unlimited and Burnout, where strict courses and structured championships give way to individual events, festival atmosphere and the freedom of the open road. With head and heart pulling in different directions it could have been awful. Instead, it’s anything but.

Forza Horizon Storyline
The concept behind Forza Horizon is that it simulates a fictional Colorado motorsports and music festival. While acts like The Black Keys, Friendly Fires and the Arctic Monkeys take the stage, drivers face off in a series of events dotted around the locality, with the events categorised by difficulty, and entry controlled by coloured wristbands. Starting off as a newbie driver, you work your way through the difficulty levels, driving to whichever event takes your fancy, and hopefully coming away with a podium position, points that take you towards your next wristband, and credits you can spend on upgrades and new cars. The structure is actually pretty generous. Not only do you not need to come first in each race to proceed, but you don’t even need to take part in all events if you don’t want to. Freedom is built into the game. 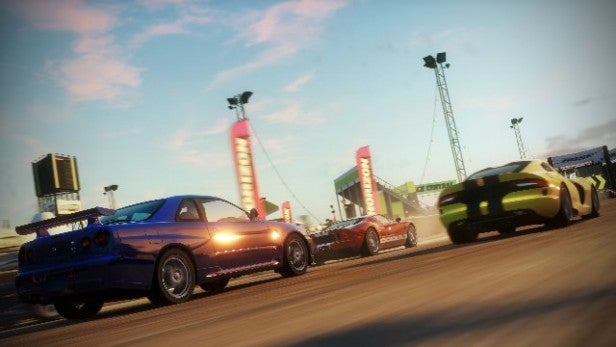 In fact, what happens between races is almost as interesting as what happens in them. The game has a third metric on top of points and credits – popularity – which you earn by driving stylishly as well as fast. Even when you’re just out on the open road, you can be totting up popularity through your daredevil manoeuvres and impressive drifts. Popularity unlocks specific PR events, which might have you racing planes or sprinting across the Colorado landscape to catch-up with hot air balloons. As completing these events will get you a new car, they’re always worth trying. Meanwhile, there are billboards to knock down to net upgrade discounts, and every now and then you’ll hear a rumour of a vintage classic hidden in a barn. Race to the area, track it down, and you can have it cleaned up and ready to race. Throw in a secondary series of illegal street racing events, which see you racing on the Colorado roads complete with normal traffic, and you can hardly accuse Forza Horizon of a lack of content – or variety.

Still, you might say, so far, so Need for Speed. Well, none of this would matter if Forza Horizon drove like a conventional arcade racer. The genius of the game, however, is that it still plays like a Forza. If you want a more accessible experience, you’re free to dial down the difficulty level, switch on all assists and follow the game’s racing line, but the game just gets better as you turn off assists, go to full simulation mode, or simply find a balance that works for you. In fact, you receive bonus points and credits for winning races with assists turned off, so it’s in your own interest to do so. 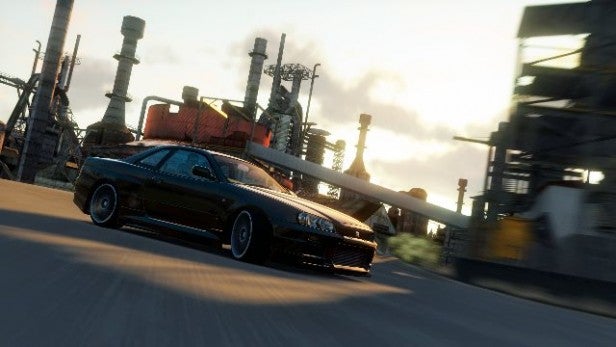 Forza Horizon Gameplay
If pushed, we’d still put Forza slightly behind Gran Turismo when it comes to a real-world driving feel, but if so it’s a very, very close second. Here the physics and handling models turn what might be a decent arcade racer into one of the most satisfying virtual driving experiences around, where vehicles have a real sense of weight, momentum and dynamics, and where there’s a convincing impression of tyres interacting with tarmac, gravel and dirt. We suspect the models have been dampened down slightly for the off-road racing to make the game slightly less frustrating, but if so it’s not something you really notice while you’re playing. With a controller Forza Horizon just feels great. With a wheel, it feels even better.

AI also seems to be an improvement on Forza 4, with the competition more aggressive, more inclined to take risks and – cheerfully – more likely to come off the track having done so. It all makes the game that bit less predictable, and more exciting. 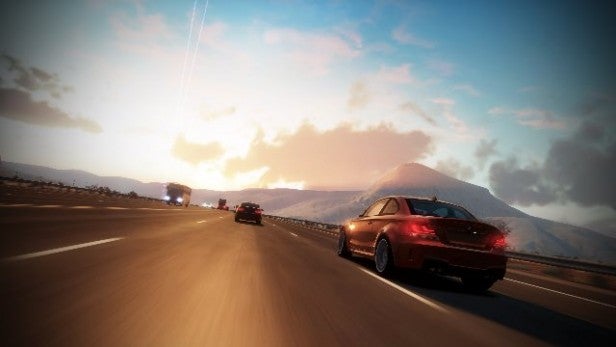 Forza Horizon Graphics
Graphically, Forza Horizon is a bit of a stunner. Forza has always delivered when it comes to beautiful-looking cars in motion, but it’s often struggled when it comes to the scenery. Real-world race tracks rarely look that exciting, and while Forza 4 upped the ante with its gorgeous Italian coastlines and Alpine passes, it didn’t always hit the heights that Horizon almost constantly reaches for. With its mountains, waterfalls, rural landscapes and canyons, Colorado turns out to be a dazzling setting, and there’s almost a subgame to be played in roaming around in a photogenic supercar and taking shots with the game’s elegant photo mode. If ever a game deserved the glossy landscape treatment, it’s this one. 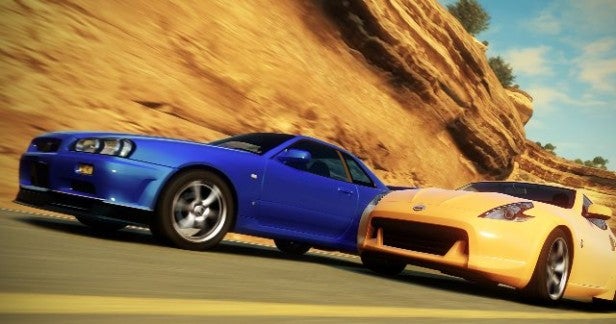 Admittedly, the festival trappings turn out to be a double-edged sword. On the one hand, the music, the crowds, the laser light-shows and the radio stations – complete with slick chatter about your recent progress – work well to give Forza Horizon an atmosphere the slightly po-faced Forza Motorsport has never really had. Even with a choice of three stations you will hear a lot of songs repeated, but at least the music is modern, well-chosen and great to drive to. On the other hand, some aspects – like the rival racers who effectively operate as optional boss battles – feel a bit forced. Is the racing improved because each event is prefaced with an appearance from a stereotypical hot chick racer or Jackass-esque TV star? Probably not.

Forza Horizon Cars
Otherwise, we have just two complaints. Firstly, there are no big crashes and only cosmetic damage, and while we’re sure this comes down to vehicle licensing requirements, it means Forza Horizon lacks some of the bite of Need for Speed: Hot Pursuit or the criminally underappreciated Need for Speed: Shift 2. Secondly, those looking for a huge car collection should look elsewhere. Horizon covers almost all of the important ground in term of marques, but each has only a handful of models at best. With beauties like the BMW M5 Coupe, Ferrari 458 Spyder, Shelby GT500 and Lotus Evora this isn’t necessarily a problem, and it’s great to see some bigger vehicles, like the new Range Rover Supercharged or Ford Raptor. 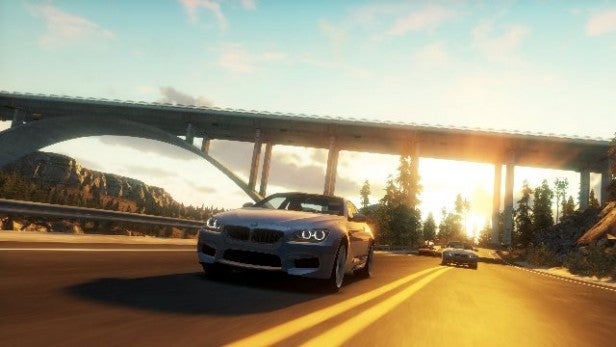 At the moment we can’t say too much about the multiplayer. While the servers are open at the time of writing, they’re hardly thronged with racers, and it will take a while before Forza’s excellent customisation and car auction features make themselves felt in the new game. It’s a slight disappointment that Forza Horizon appears not to have the massive multiplayer features of the Test Drive Unlimited series, but it does have a good range of modes, and we’ll report back on these once we’ve had a decent chance to try them.

Forza Horizon could easily have been a mistake – an arcade spin-off that wasn’t arcade enough to compete with Need for Speed: Hot Pursuit or the upcoming Need for Speed Most Wanted reboot, while not being ‘Forza’ enough to appeal to existing fans. Instead, it’s a bit of a triumph; a Forza that should appeal to anyone who likes racing games, whatever their individual bent.

Forza Horizon Verdict
Forza Horizon puts the guts of Forza 4 in a more accessible free-roaming, arcade-style body. The result is a monster of a driving game, with more thrills and visceral appeal than normal Forza, but more satisfying handling than any arcade racer. Like fast cars, good music and gorgeous scenery? Then it doesn’t get better than this.