With Forza 3, Turn 10 studios finally cracked it, producing a game that
improved on the rather bloodless racing that marred Forza 2 and finally
matched Gran Turismo for cars, tracks and game modes. So, where to take
the series next? Turn 10’s answer is both a refinement and a whopping
great expansion, with a revised graphics engine, career structure and
handling model, all tied into a bumper package of cars, tracks and modes
that makes Forza 4 the most comprehensive rival Gran Turismo has ever
faced. It’s a generous game, in every way possible, and one that bends
over backwards, forwards and sideways to please anyone with an interest
in four-wheeled autos. 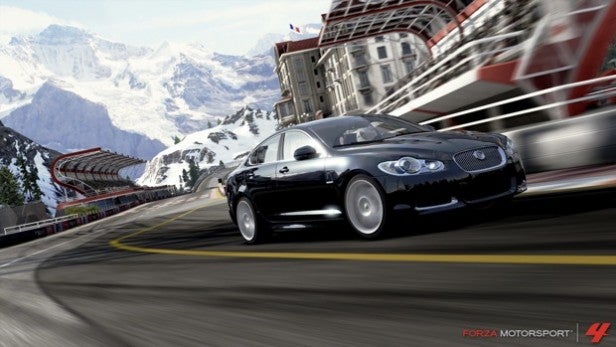 And
by everyone, we mean everyone. Microsoft has sensibly held back from
pushing Kinect features into every area of the game, but this is still
one of the most Kinect-friendly ‘hardcore’ games that the company has
released to date. The new Kinect steering mode – with CPU-controlled
acceleration and braking – is restricted to simple one-off races and
challenge events, but it works surprisingly well, and if it gives
younger gamers and families a simple,fun way into Forza, all the better.

Navigating the game’s numerous nested menus through voice is
arguably easier than doing so with a controller, and if the much-trumped
AutoVista feature is a flashy gimmick, then at least it’s a good flashy
gimmick. Through a series of simple pointing, leaning swiping and
grabbing gestures it’s possible to check out the cockpits, curves and
engines of a good range of luxury cars of the sort that most of us will
never see physically, and if the occasional bits of Jeremy Clarkson
commentary get perilously close to self parody, then at least they make
the experience a bit less clinical. 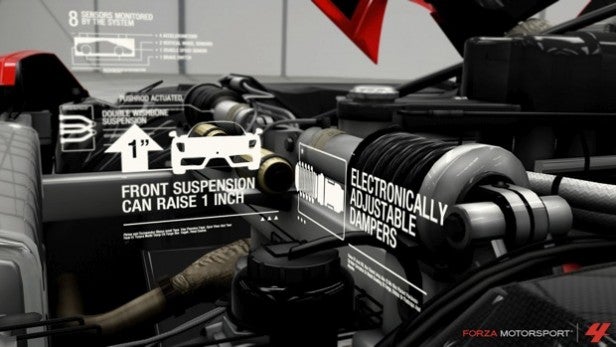 But
then you don’t really splash out $40 on a new Forza to look at cars or
waggle an imaginary steering wheel: you do it for an authentic
experience of driving. Here Forza 4 excels. The game uses a new handling
model based not solely on manufacturer data but also on tyre data from
Pirelli, which Turn 10 claims has transformed Forza’s physics
simulation. Well, it’s hard to say whether Forza 4 beats GT5’s famously
realistic handling, but it certainly matches it. While – tragically –
you won’t find us driving high-end Jags and Ferraris on our weekends,
the cars in Forza 4 handle like you imagine that they should. And if you
don’t agree, check your current difficulty settings. Should you find
you’re not working hard enough while keeping vehicles on the road at
high speed, then it’s time to start switching some assists off. As we
said, Forza really tries hard to give everyone a good time, and not just
those of us who want our driving sims accurate and exacting. 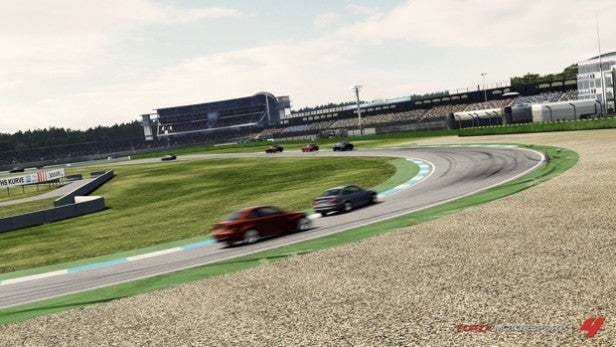 The
graphics, too, are fabulous,with Turn 10’s brand new lighting engine
doing a spectacular job of knitting cars and tracks together to make one
sometimes hyper-realistic scene, with the kind of rich, natural light
that Hollywood cinematographers would wait all day for. If Forza 2
suffered from an excess of sterile-looking race-tracks, then Forza 4
goes even further than Forza 3 in redressing the balance, with a new
sprint through a stunning alpine track a particular highlight. The cars
are beautifully modeled, and the whole thing looks like a moving
photo-shoot for a particularly glossy high-end car magazine. A quick
spin along the Amalfi coast in a classic sixties Alfa Romeo leaves you
pondering the unfairness of a life in which you’ll never get to do this
for real.

If Forza 4 lacks anything, anywhere, it’s in the racing rather than the driving. On the one hand, the restructured World Tour career mode gives you plenty of choice. While you’re shuttled from track to track in one set order, at least you can choose what kind of event you want to compete in, so you’ll never find yourself forced to race mid-range hatchbacks if you’d rather race vintage sports models or high-performance monsters.

The structure also means the game is always moving. While there are multi-stage events scattered through each tier, you never find yourself stuck doing the same races in the same class of cars over and over again. If you want to buy cars and upgrade them manually you can do, but Forza never forces you to do so. The game doles out a choice of new prize cars for every driving level you gain, and slick auto-upgrade options ensure that you’re never without a car that can handle the next race, providing you have a little cash to do it up with. 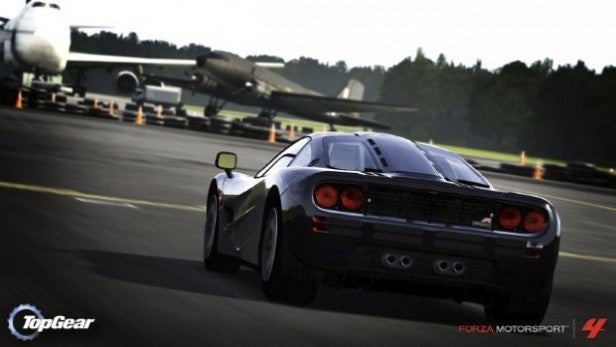 All this is great, but while Forza 4 certainly delivers more exciting racing than the rather pedestrian Gran Turismo 5, the competition still lacks a little bite. Your CPU-controlled opponents are smart enough to block your overtaking moves (and occasionally dumb enough to spin off the track on corners), but once you get in front they really struggle to catch up with you unless you a) get too timid on the corners or b) are driving something relatively underpowered.

You see, while playing Forza 4 we kept on thinking back to this year’s Shift 2: Unleashed. While EA’s game didn’t handle as well as Forza 4, Shift 2 made us work much, much harder for every podium position, which encouraged you to take more risks and race in a gutsier, more aggressive style. Forza 4, by contrast, puts the emphasis on technical skill and precision. While later races in faster vehicles make you feel like you’re pushing the envelope, it just doesn’t match Shift 2 for four-wheeled thrills. 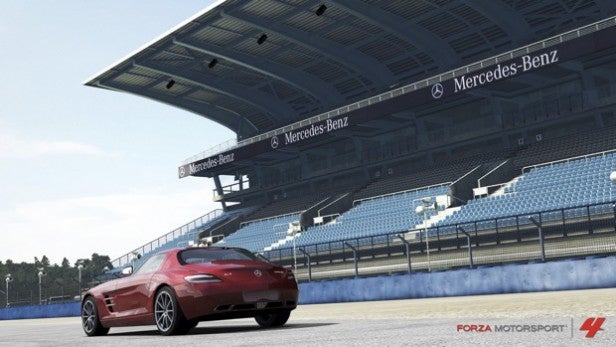 Luckily, this doesn’t prove to be as much of a handicap as you might think. For one thing, Forza 4 is still so much fun to drive that you never feel bored with it, with the constant stream of new cars and new track variations ensuring that there’s always a new experience to be had. New Top Gear branded challenges also help, even if their semi-comic tone can feel out of keeping with Forza 4’s more serious bent.

For another, there’s all the competition you could ask for in the game’s revamped online modes. The star here is Rivals mode, where you can race either Xbox Live friends or random strangers in special challenge events using ghost cars, so that it doesn’t really matter whether you’re playing online at the same time or not. Your rivals are notified when you beat them, and you in turn are notified when someone beats you, and there’s nothing more guaranteed to get you back on the track than the news that your hot lap has just been obliterated by a friend. In a nice touch, Top Gear’s Star in a Reasonably Priced Car is one of the challenges; it’s just a shame it hasn’t been integrated with the show’s real-life leader board.

Some of Forza 4’s long-term success depends on how well Turn 10 supports Rivals mode with new monthly challenges, but it’s certainly a great new way to play the game, particularly if you don’t like the pressure of the traditional online mode. This remains as smooth and playable as it was in Forza 3. 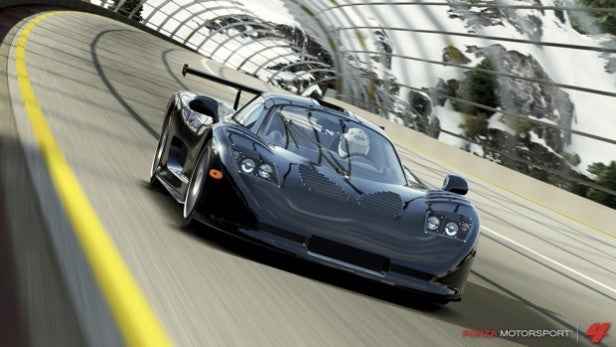 Sometimes Forza 4 can feel too generous, as if the constant feed of level-ups and prize cars is a bribe to keep you playing. Yet if it is, it’s hard to complain. While GT5 still wins on the number of cars available, Forza 4 seems to have a more satisfying collection, with fewer variations and a fascinating selection of special editions and vintage models. It’s as rich and deep a driving game as Gran Turismo, but also more fun to actually play. If Forza 4 could inject a little of Shift 2’s attitude – though perhaps without the irritating X-Games nonsense – then its position as the top serious racer would be assured. As it is, it’s still the reigning champ, and comfortably one of the best driving games ever made.

Verdict
Like Gran Turismo 5, Forza 4 works better as a driving game for car nuts than a straight racer, but whatever minor shortcomings it has on the track are more than made up for by the generosity of the package. It looks beautiful, drives brilliantly and has so much going on – both online and offline – that you’ll be glued to the wheel for months.