To say that I didn’t expect this is something of an understatement. I loved Metropolis Street Racer when it first appeared, but every iteration of Project Gotham since has left me slightly cold. PGR was solid, but felt a little underdeveloped. PGR2 felt like a more fully realised version of PGR1. It had revolutionary online play and arguably the finest city line-up of the series, yet it still didn’t give me quite the racing experience I was hoping for. PGR3 was obviously rushed out for the 360 console launch, and for all its graphical razzle-dazzle still proved slightly weak on the track. We never even bothered to review it, but I remember discussing it with our illustrious editor at the time, and we both felt that the balance between the kudos challenges and the racing had been lost, and that the supercars were handed to you on a plate too early in.

PGR4 sorts that kind of thing out straight away. The team at Bizarre Creations has taken the slightly unexpected step of splitting the main single-player game into two modes; an arcade mode mixing straight street races with all the cone challenges, elimination races, hot laps and kudos challenges that Gothamites have come to expect, and a more straightforward career mode. At first, this second, more meaty option looks horribly conventional. You work your way through the race days marked on a calendar, picking tournaments from a selection, and making your way through the world tour rankings. Kudos points – won both by winning races and sliding your way stylishly around the track – can be taken from either mode and exchanged for themed packs of vehicles, additional tracks or fun, throwaway extras like a 3D photo mode. Basically, if you want to complete the game, this entails finishing all ten chapters of the arcade mode, reaching number one in the career mode world rankings and unlocking all the different cars, tracks and extras. Trust me, it’s going to take you an awfully long time. 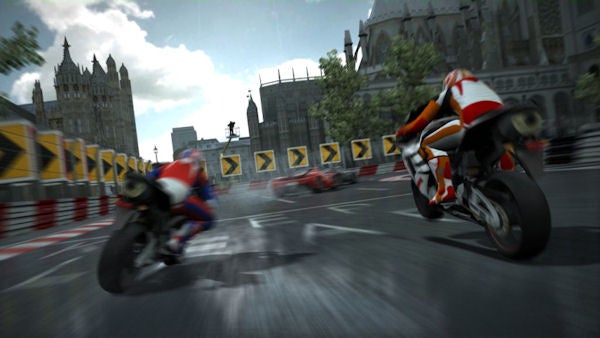 The good news is that the career mode has a lot of flexibility built in. The various tournaments are ranked in terms of difficulty and themed by style or city, and if you would rather concentrate on races and time trials than on drift or cone challenges, then there’s usually a way of doing so. What’s more, the career mode seems almost perfectly paced. You’re not stuck with old bangers for hour after hour, but you have to earn the kind of kudos that buys a pack of new Ferraris, and you’ll have to decide whether that’s your one and only priority, or whether it’s worth splashing out a few Ks on a package of US muscle cars or a selection of Japanese tarmac-burners as you go. After all, the higher you rise the more speed you’ll need to succeed.

Now, the new structure helps, but the real surprise is how much the core gameplay has improved. On the one hand, the style challenges seem a little more forgiving of mistakes. You still won’t get anywhere if you don’t learn how to trigger and maintain control of all those powerslides and handbrake turns, and Gotham regulars will still find joy in chaining together rubber-burning moves until they come within a hair’s breadth of losing any grip. However, you no longer get penalised just because a rear tyre has nudged the barrier. 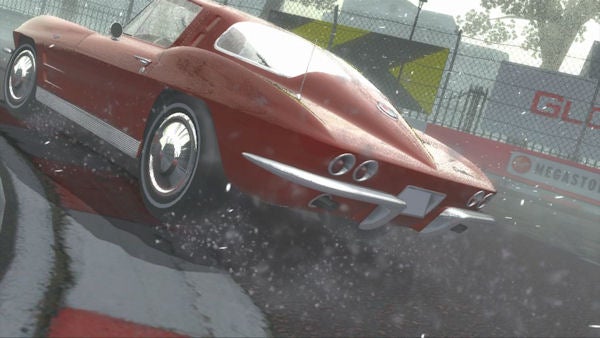 Better still, the actual racing itself is far more exciting. I suspect Bizarre has spent a considerable amount of time finessing the handling model and tweaking every straight, climb, dip and corner of every track to make sure that every race provides a distinctive but thrilling experience. The handling might not be as ultra-realistic as in, say, Gran Turismo 4 or Forza Motorsport 2 – let alone GTR Racing 2 – but it conveys the right sense of mass, speed and grip without getting in the way of the joy of reckless driving. Most racing games have a couple of tracks you grow to love, a fair selection of tracks that you like and a couple where you groan each time they appear. In PGR4 the hit-rate is stupendous, with nary a duffer to be found and track after track of gut-wrenchingly tight corners, wide, high-speed boulevards or fearsome climbs and spectacular downhill sections. What a treat! 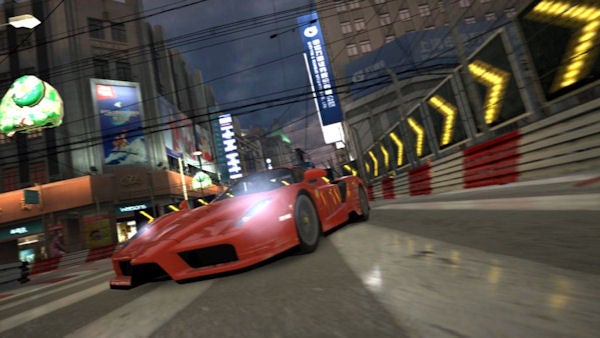 It helps, too, that the city line-up is the strongest since PGR2, with London, New York, Tokyo, Vegas and the Nurburgring from PGR3 joined by Shanghai, Macau, Quebec, St Petersburg and a Michelin test track. The choices seem unorthodox at first, but each one actually makes perfect sense. Shanghai brings us futuristic architecture, thin, twisty streets and neon overload, while Macau delivers wider spaces and a surprisingly attractive coastal setting. St Petersburg feels a little like London on an even grander scale, with wide avenues, riverside straights, magnificent 18th Century architecture and some enjoyable, airtime-friendly bumps. However, it’s Quebec that steals the show, with its narrow, medieval-looking streets and some wonderful fast turns and ludicrous downhill Z-bends that never fail to raise the pulse. As usual, each city has been segmented into a selection of long and short tracks, each offering a subtly different experience, but each still fitting within the city’s overall style. 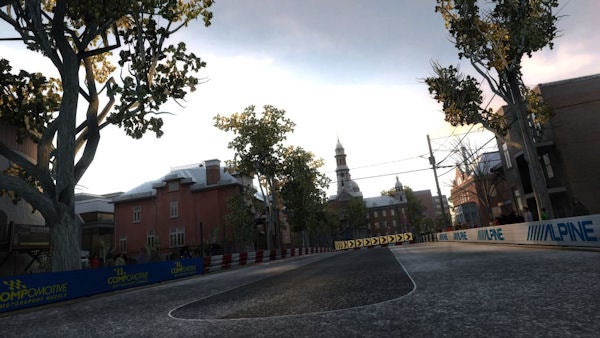 Needless to say, the existing strengths of the Project Gotham engine are readily apparent. We’ve come to expect gorgeously rendered Beamers, Lambos, Supras, Mustangs, Astons and assorted exotics from the series, and tweaks to the lighting and rendering engines have made them – impossibly – even more glamourous than they were last time around. Meanwhile, the street scenery hits a fine balance between realistic representation and the recognition that some detail is superfluous when you’re driving past at over 90mph. The trees look more realistic than they did in PGR3, and the speed blur effect seems to have been dialled back a little. The in-car view beats anything with the possible exception of Colin McRae: DiRT. Basically, if there’s a better looking road racer on any platform, then I’ve yet to see it.

And, amazingly, I’ve got this far without even mentioning the two standout features of this iteration. First is weather. Even if the rain, snow and mist effects seem slightly more aesthetic than physical when you’re racing, they still add a tangible layer of added danger to the action and there’s no denying how spectacular it all looks on the screen. Racing through Shangai or Vegas at night with the rain pounding down and the neon smearing is one of my highpoints of gaming in the current generation. 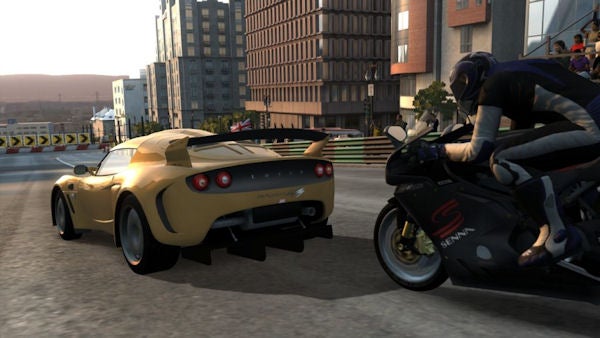 Motorbikes, meanwhile, are a fantastic inclusion. Perhaps those used to Climax’s MotoGP series will bemoan the slightly fanciful handling model and control scheme, but I think it’s another case of Bizarre making smart choices about when to prioritise realism and when to prioritise playability. In PGR4 the two-wheelers are first and foremost fun, not least because you can pull some ridiculous wheelies as you pass some hapless driver then turn round and taunt him from your saddle. 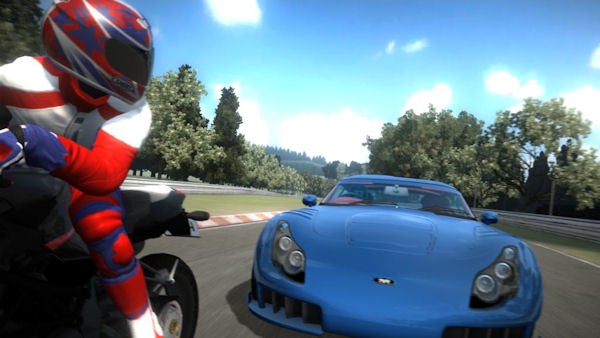 There’s a lot more good stuff I can say; about how streamlined and lag-free the online component is; about how well the different play modes work in multiplayer, and about how clever it is that the game automatically compares your scores in different challenges against those of other gamers on your Xbox Live friends list. I could waffle on at length about some of the excellent cars you’ll meet further on, or burble all about the Tesla Roadster – a crazy electric supercar that sounds like a cross between a milk-float and a washing machine gearing up to spin. And in all this, the only negative things I can say are that there’s still no real car damage to speak of, and that the driver AI – while good – could still be a little bit more aggressive. 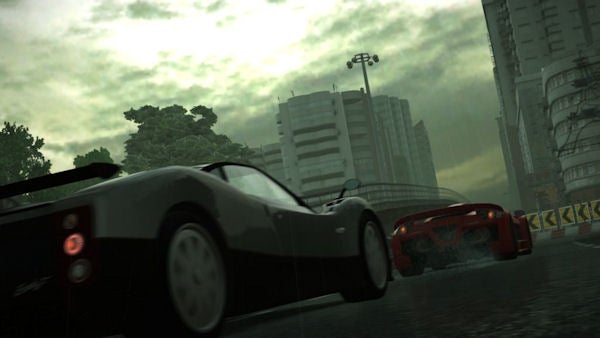 While I’m at it, maybe we could do with a few more European makes and models, and perhaps a handful of tracks suffer from a lack of opportunity to overtake. Overall, though, we’re talking minor niggles, not stinging criticisms. Some of you out there might regret the lack of car customisation options or complain that PGR4 still can’t match Forza for the depth of its online and community options. But to that I’d say that all that tinkering often results in a spend-to-win mechanic, and that all the custom paintjobs and car auctions in the world can’t make up for the lack of an engaging single-player experience. After the disappointment of Forza 2 and the non-appearance of GT5, PGR4 is practically de-facto the leader in its field. Unless either series can stage a spectacular comeback, I suspect it might stay that way for some time.


Project Gotham has veered even further from GT-style driving sim territory, but it has finally nailed its mix of speed, style and substance. As of now, it’s the best road racer on the market.