I’ll be honest – I didn’t expect this to be this good. The Test Drive name lost its lustre long ago, and all the hype surrounding the Hawaiian setting, the freeform exploration and the luxury sports car angle – not to mention an unimpressive demo circa E3 – had me thinking ‘nice gimmicks, nice cars, nice eye-candy, but where’s the game?” How wrong I was. To my mind, Test Drive Unlimited is the first real next-generation racing game. It’s not a polished update of a PS2 or Xbox title, nor is it last year’s game in HD with added motion blur. Instead, it’s a new experience, and one that gets better the more hours you put in. 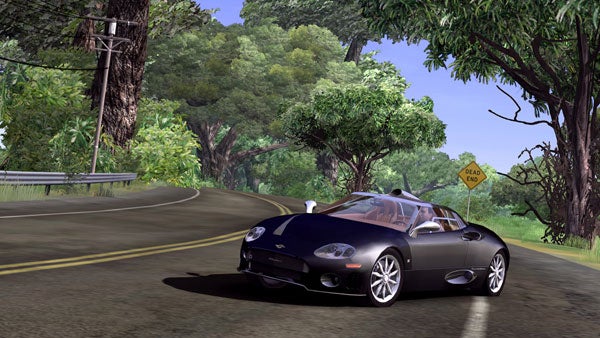 Sometimes, Test Drive Unlimited feels like the world’s first Massive Multiplayer Online Racing Game, other times it feels like an exotic lifestyle simulator, but one thing it never feels is ordinary. In other racing games you spend your time collecting cars, here you’re collecting plush beachfront property (even if you’re only doing it for the additional garage space). In other racing games you might spend money on a new custom paintjob with which to decorate your motor. Here you’re spending clothing tokens at Ben Sherman or Ecko on new threads with which to decorate yourself. And why sweat over turbo chargers or balanced fuel injection systems, when you could be pondering whether you belong in a chilled-out lounge bar or a poolside lounger? It’s never easy to pick the right club. 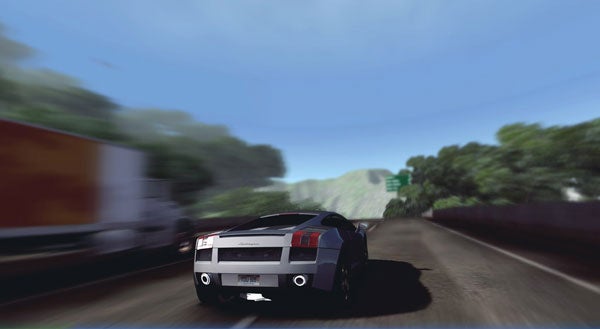 Luckily, the game starts you off with more fundamental choices: the right face, the right house, and the right car. After that it’s time to start exploring, and it rapidly becomes clear why TDU is so very special. The island of Oahu is a magnificent achievement, though Eden Studios should probably share some of the credit with Mother Nature herself. I have no idea how close its towns, cities, gorgeous coastal scenery and rugged mountainous interior are to the real thing, but it certainly feels like a real place, and far more so than Project Gotham’s empty facsimiles or Need for Speed: Most Wanted’s urban sprawls. It helps that the streets and roads are bustling with other traffic, and it’s only the lack of pedestrians that gives the game away. The effect is so compelling that there are times when you’re tempted to stop and give way at junctions, making this the first game in history where you reach for a non-existent indicator button. Meanwhile, a mini-map, definable waypoints and an instant travel option make it surprisingly easy to find your way around. Good, as doing so is essential if you want to uncover the full range of showrooms, shops and challenges. 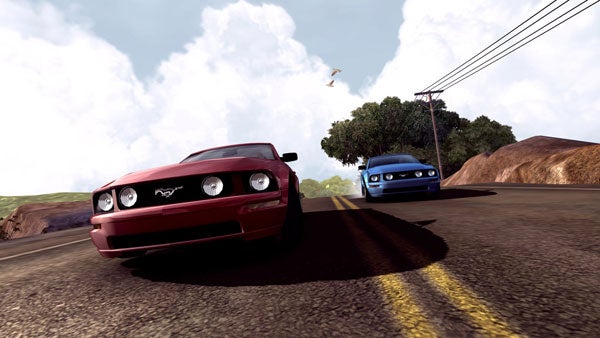 More importantly, Oahu is a great place to race. Normally, a real location is a limiting factor for the racing game designer, who’s forced to create interesting courses out of the most mundane of urban grids. Not here. Oahu has something for every racing taste, whether you prefer tight-cornered tarmac tear-ups or long, undulating coastal routes. The latter might sound like easy going, but then you try negotiating them at 170MPH in a supped-up Corvette, and realise that you haven’t blinked for three minutes and the lump halfway up your chest used to be your stomach. 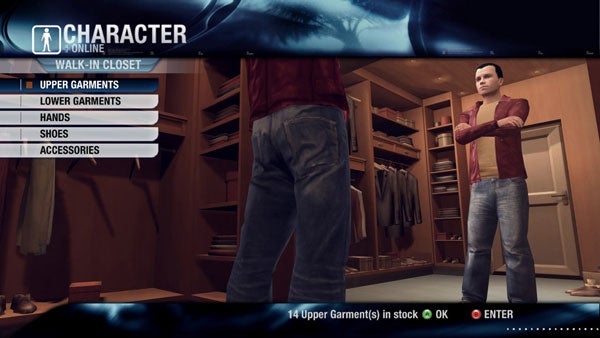 Of course, you don’t have the island all to yourself; if you start the game while connected to Xbox Live, you’re automatically connected to a game server, and you’ll see other gamers exploring the island with you. It’s not quite an MMO, but more a racing equivalent to Guild Wars, with the island acting as a central hub, and events divided into solo affairs for single-player action, and online events where you enter a lobby screen and wait for a spot on the starting line. In effect, the races are instanced, but this works to keep the online action speedy and – for the most part – relatively lag free (though whether this will be the case when the buying public hits the servers remains to be seen). It’s one of the finest integrations of online and offline experience I’ve ever seen. 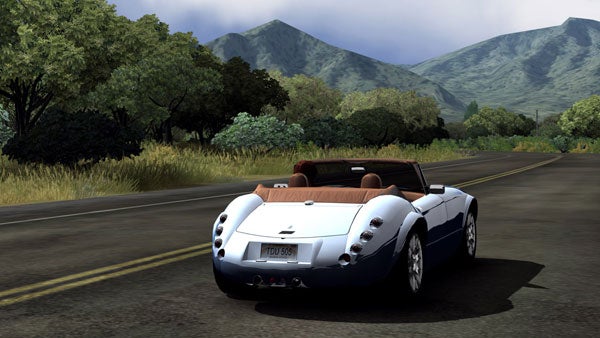 And other neat tricks continue the online theme. For a start, players can create and post their own challenges at local diners, with a fee collected from each entrant for the pot, and the final amount shared between the winning player and the setter. And if you’re tired of your old ride or want a reduced one at no cost, the game even supports used-car sales. Just put your old motor on the market, and the game takes care of the rest. 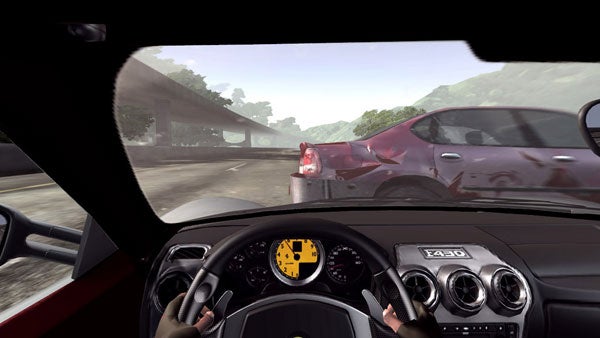 It’s almost redundant to say that TDU looks fantastic, but it does. As far as I’m concerned, it outclasses PGR3 and NFS: MW, even given the former’s more detailed cars and million polygon monuments. The scenery is lush and frequently breathtaking, the warm HDR lighting is sublime, and the cars boast lovely body work and beautifully handled reflections. Meanwhile, I doubt any car freak would fail to be impressed by the wonderfully detailed interiors when you switch to the driving seat view. And from the roar of engines to the screech of brakes, the audio is equally top notch.

In fact, you may be so gobsmacked by the whole affair that there’s a danger that, in the early stages, you may be underwhelmed by the racing itself. It’s not the fault of the cars, which handle well, nor the sensation of speed, which is excellent, but more an overall feeling that TDU lacks any real racing spirit. The first events are, by necessity, easy, but they also feel gutless, without the grit of Forza or the manic, car chase intensity of NFS: MW. 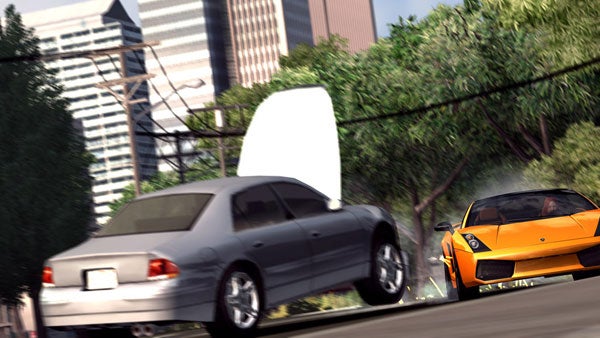 Just give it time. For one thing, the game isn’t restricted to straight races. There are girls who need a lift home, couriers that need packages delivered, and speed camera challenges that ask you to race through police patrolled streets at breakneck speeds. All of these demand concentration and nerve, particularly the game’s somewhat stroppy beauties, who give you a hard time if you’re too slow, and demand you stop if you drive too dangerously. Still, if they don’t reward you in quite the way you might hope, at least they’re generous with the clothing tokens.


And after the first few races, the AI shrugs off its sleepy demeanour and starts dishing out real competition. With their aggressive manoeuvres and gutsy cornering, these guys are anything but the racing-line drones of Gran Turismo – something made clear by their tendency to whack you from behind or spin off course. And as the game goes on, TDU leaves you feeling that it’s not all about learning the tracks or buying a faster car, but about developing the skills and intuition to tackle whatever the road can throw at you, whether its sudden turns, rapid changes of elevation, or just a whole lot of traffic getting in the way. 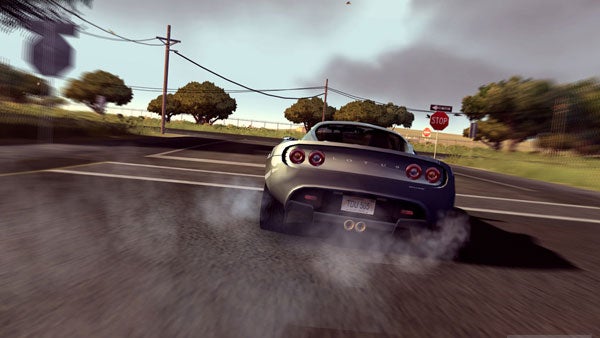 In fact, what starts out looking like the game’s Achilles Heel becomes its biggest asset because, just as the shine is beginning to wear off the vast game world and its house-buying, smart-dressing mod cons, you start falling into its trap. Like any great racer, you end up racing to win prize money to upgrade or buy new cars, so you can race and win some more, and while TDU can’t match Gran Turismo or Forza for cars and upgrade options, the models on offer are numerous and desirable enough to keep you going for some time. Are you really concerned that there’s no Mazda or Toyota when you’re racing a rare E-Type Jag along the Hawaiian coast at sunset? Thought not. And the online component only makes thing worse. After all, do you want to mooch in with a Mustang when everyone else is packing Lamborghinis and Ferraris? Well, you’d better start bringing home the loot. 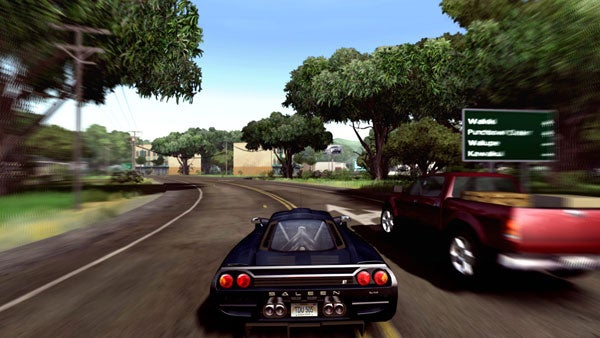 So, is this the new benchmark for racing games? Well, opinions are going to differ wildly on this one. There’s no doubt that PGR3 and Gran Turismo 4 still have the edge on cars and handling, while Burnout: Revenge and NFS: MW offer more in the way of easy thrills. Yet, for my money, this is the most absorbing, engaging racer of the moment; I can’t think of anything else in ages that has left me so impressed within the first two hours of play, and so utterly addicted as the next few days flew by. In other words, TDU is something of a revelation, and Forza 2 and NFS: Carbon have their work cut out– it’s going to be hard to top this.


Much, much more than superficial eye-candy, TDU is the most exciting driving game in ages, and a hot new benchmark for next-generation racers.