Taking a well established series in a new direction always has its risks. You can confuse or even alienate the fans, lose identity or simply muck up whatever it is that has made your series special. For every series reboot that has worked – Resident Evil 4, Need for Speed: Most Wanted, Tomb Raider: Legend, Medal of Honor: Airborne – there are plenty that haven’t. Did anyone out there like Need for Speed: ProStreet’s new direction? How about Tomb Raider: Angel of Darkness or the last Alone in the Dark? 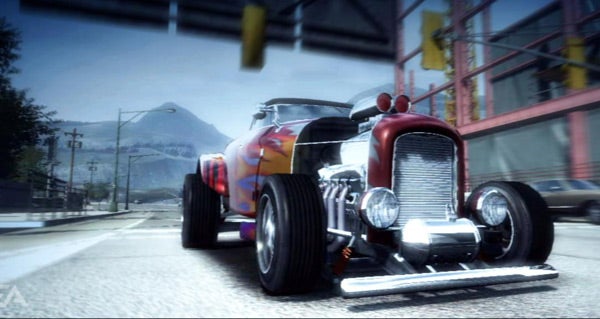 Arguably the Burnout series is even more sensitive to change than most. Barring the deliberate backwards step that was last year’s Burnout: Dominator, the Burnout games have continually evolved with each new instalment, adding new features and new game modes and making dramatic changes to the gameplay every time. In each case, some fans have cried foul. Not everyone liked Burnout 3’s emphasis on offensive driving, while Burnout: Revenge’s over-egged ‘traffic checking’ system was hugely divisive. In a game where weaving in and out of traffic is a major part of the rush, making the player able to hit 90 per cent of cars with impunity was maybe not the smartest move. 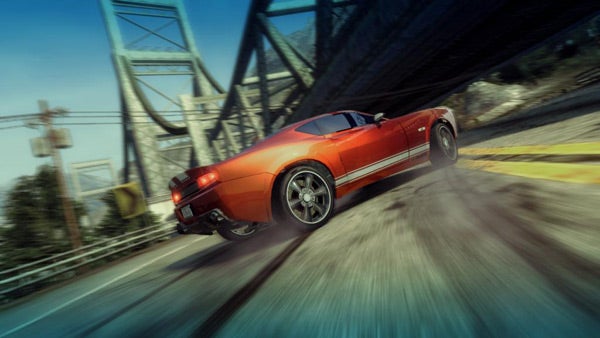 Luckily, Criterion’s new spin on Burnout is a triumph. Paradise takes the series to a whole new level, yet the core experience is still recognisably Burnout through and through. Some hardcore Burnout fans are bound to disagree, but for me it’s an instant classic, both in context of the series and in terms of the arcade racing genre as a whole.


The biggest, boldest move, of course, is the decision to shift away from courses, leagues, career ladders and competitions to a single, coherent open world. Fears that Paradise City might be some homogenous urban sprawl are blown away within the first hour or so of play, as it soon becomes apparent that, with its various downtown, harbour, industrial, suburban and mountain districts, Paradise equals any Burnout to date in terms of the variety of its locations. While there are comparisons to be made with the approach taken by EA in Need for Speed: Most Wanted, Paradise simply does it better. 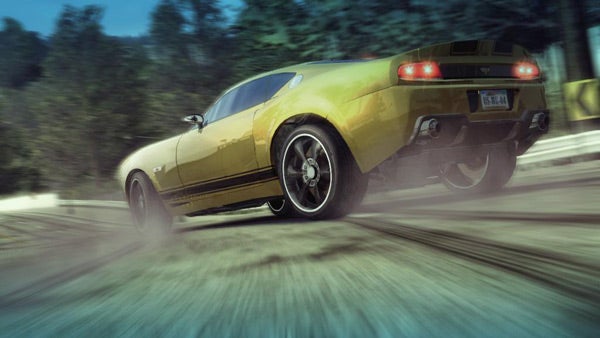 It will take you days of solid play before you’ve worked out half of the shortcuts, major routes and side-roads that link any one location to another, Crucially for a game in which stunt runs are a big part of the challenge, it may be even longer before you know every ramp, bank and jump opportunity in the city. What matters here isn’t the size of the city but its density – every road, street, district and backway is packed with things to discover.

And, as the game makes clear at the outset, each street and its junction has some sort of challenge for you. The meat of the game is in progressing through the game’s various licenses by winning events. These appear on the map as you explore the city, with one appearing at every major intersection, and you can enter them simply by pressing and holding the two triggers simultaneously to spin your wheels near the start line. 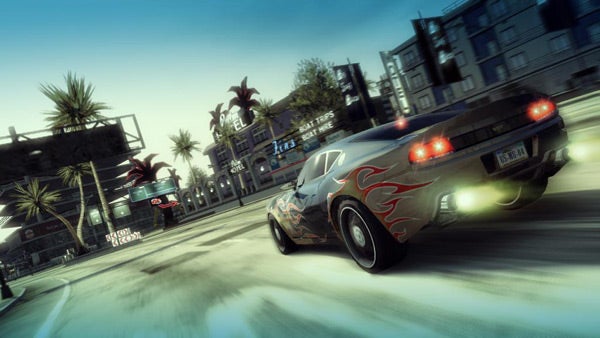 Some events are straight races, where you start at one place and have to get first to one of eight finish points using any route and any means necessary. Some are stunt runs, where you have a fixed score target and a time limit, and it’s up to you how to chain boosts, jumps and drifts together into combos in order to achieve the former before the latter runs out. Others are road rage sessions: blast so many cars off the road before the time limit runs out to get another point on your license. Others still are Marked Man events, where you have to make it to your destination before the sinister black cars can cripple your vehicle for good. Finally, we have Burning Route events, custom-built for one particular car and only open to that make and model.


All these events are targeted at different types of vehicle and at different sets of Burnout skills, but none drag the game down in any way. True, the races and Marked Man events challenge your navigational skills as much as your driving ones – the mini-map in the corner is your new best friend – but they still draw back on what always made Burnout great: the feeling of driving at impractical speeds while slaloming through traffic, taking chances that always leave you less than a whisker away from a collision. Marked Man is probably the most thrilling drive we’ve had since Most Wanted’s police chases, as the implacable black cars keep coming as you desperately try to outfox them. If Marked Man doesn’t get your pulse rate climbing, you might like to make your way to the nearest Buddhist monastery. You’re probably a world-class Zen master in waiting. 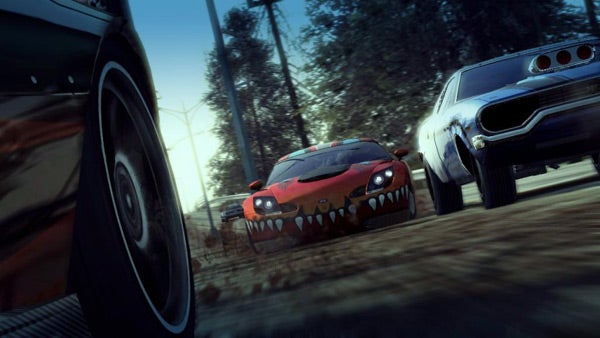 Now, some will tell you that the biggest bummer in the new Burnout is the fact that you can’t instantly restart an event should you fail it. Criterion made the somewhat foolhardy decision to keep everything within the in-game world. Want to take part in an event? Drive to it. Fancy a change of car? Get to your nearest junkyard. Need a repair or a respray? Better find the local shop. This means, however, that there’s no quick menu to put you back on the race line when things go pear-shaped or just skip you to the next event when you fancy it. Some people, apparently, don’t like this.

For me, however, it’s a non-issue. The great thing about Burnout Paradise is that, even when you’re not directly competing, you’re always exploring and having fun. For one thing, the handling is enjoyable in itself, with three classes of car – stunt, speed and aggression – that all have their own clear characteristics, and a range of models that then split the classes into dozens of subtly different handling models. For another, there are shortcuts to discover, barriers to knock down and bill boards to jump heroically through, and the game constantly keeps track of your progress. 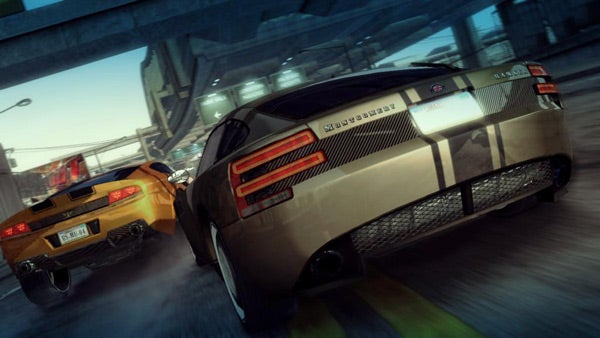 You can score fast times along a particular street and win records – even have your achievements posted on the online leaderboard. Simply getting from A to B is never dull, because there’s always traffic to race through and new routes to try. Plus, every now and then the game unleashes a new vehicle on to the streets, and by finding it and taking it down, you can add it to your collection. There’s just too much to do in Paradise City to ever feel bored.


Admittedly, the new slow-motion Showtime mode – activated at any time by clicking both L1 and R1 or the bumpers simultaneously – is no replacement for the classic Crash Junctions of Burnouts 2, 3 and 4, but it’s still a lot of fun. Use aftertouch to hop your car around and you can still cause monstrous amounts of damage, earning multipliers for hitting buses and trying to build new high scores for your personal and online charts. Some of Crash Junction’s puzzle element has been lost along with the huge chains of destruction, but if this is Paradise’s one pitfall, then it’s one I’m perfectly willing to live with. 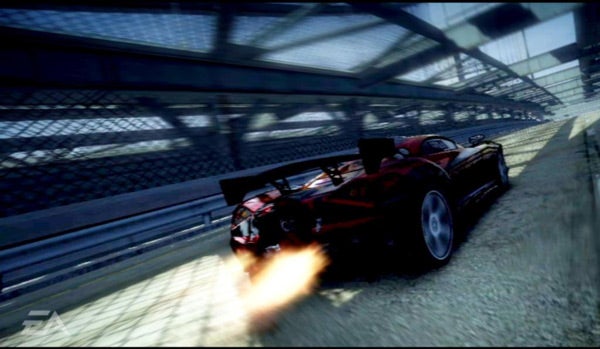 Needless to say, every aspect of the presentation is top notch. Visually, Paradise is right up there with Project Gotham 4, DiRT and Motorstorm as the best looking racer around right now. The detailed modelling, along with the various lighting and reflection systems create some astonishing results. Combine that in slow motion with the most rich and detailed damage modelling system I’ve seen to date, and you can’t help but be gobsmacked by the replays that follow every crash.

The music is a huge improvement on most recent EA games, with a leaning towards US alternative rock that matches the game’s setting and atmosphere without the strained punkiness that annoyed in the last two Burnouts. The sound effects, meanwhile, beg for the proper 5.1 treatment. With all the screeching tyres, growling engines, crunching metal and shattering glass in the vicinity at any one time, it’s a stunning workout for your sound system. 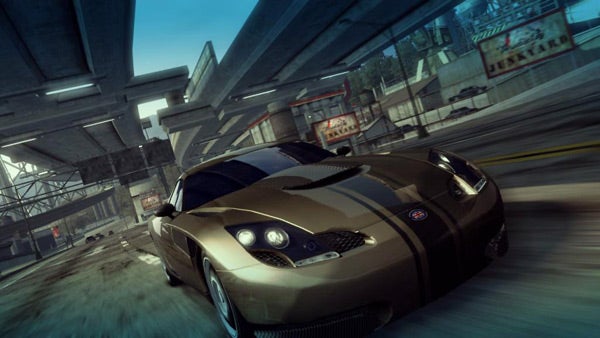 For the moment I’m limited as to what I can say about online content, for the simple reason that I’ve rarely been able to find anyone online during the period before release. What does impress is how tightly integrated it is to the rest of the game. Thanks to an elegant in-game menu system, an online race is never more than a couple of presses of the D-pad away, along with your friends list and communications. Maybe Paradise could have taken the massive multiplayer approach pioneered by Test Drive: Unlimited, but I’d argue that what’s here works perfectly for the game’s style and action. Other players are there if you want them, but otherwise the streets of Paradise City are yours for the taking.


Do I have any criticisms at all? Well, apart from the loss of Crash Junction, I might note that the early stages are perhaps a bit too easy. It was only once I hit the B license that I started failing anything except the odd Marked Man or Stunt event – and I’m no Burnout king by any means. Still, if it keeps people playing and having fun if they’re new to the series, I’d rather have too easy than mindlessly frustrating any time. 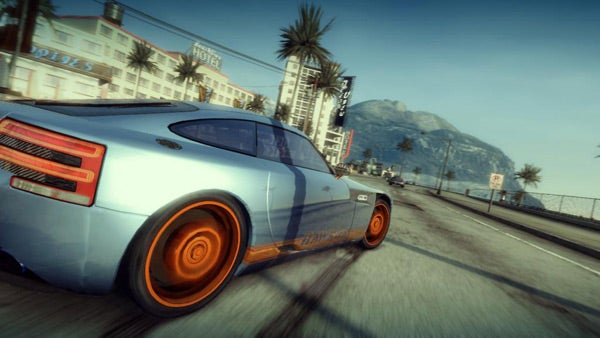 In case you haven’t worked it out by now, we have another addition to the pantheon of great racers. For me, Paradise is the best Burnout since Burnout 2, and a significant step forwards for the series. The style might be different and the open structure may be hard to get a handle on at first, but once you’re racing all you’ll be worrying about is the horizon, the cars in front and the dozen things you might crash into if you put a foot wrong in the next fraction of a second. You’ll be tensing your stomach, whistling through your teeth and wondering how long you can keep this speed up without slamming into something hard. In other words, you’ll still be playing Burnout, and it’s every bit as good as it has ever been before.


A blinding reboot for Burnout. Paradise adds a sense of freedom and depth to the series without losing the adrenaline rush that makes it tick. Beautiful, brilliant and self-assured.