You would hope that Polyphony Digital’s Kazanori Yamauchi knows that Gran Turismo 5 has to come out fighting. When GT4 arrived, GT3 was still the state of the art for serious racing games. Forza Motorsport had yet to make its mark, Project Gotham Racing was still finding the right balance between sim and arcade racer, Codemasters’ TOCA series has lost its way and the PC didn’t have anything comparable. Now things are different. Pause for a second and just look at the competition. With Forza Motorsport 2 and Project Gotham Racing 4 already available on the 360, GTR2 and RACE 07 doing great things with physics on the PC and the upcoming G.R.I.D. due on all three platforms, Gran Turismo can’t afford to get caught standing still. 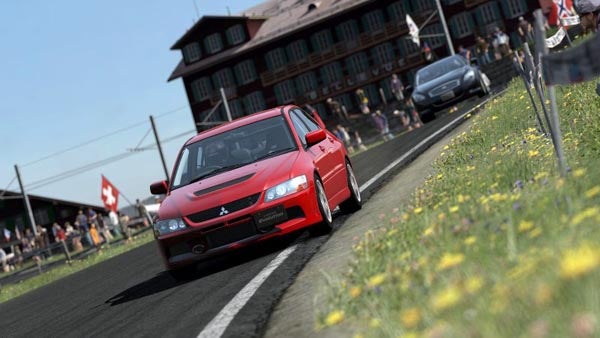 And that’s why GT5 Prologue is so important. In the past, we’ve had to ask why anyone sensible would cough up £20 for a glorified demo, but GT fans – and I’m still one of them – have been willing to do so just to get an idea of what graphic and gameplay enhancements a new console or version could bring. Whether the Forza massive agrees or not, GT is widely seen as the gold standard for console driving games. The question is whether the brand can maintain that value. 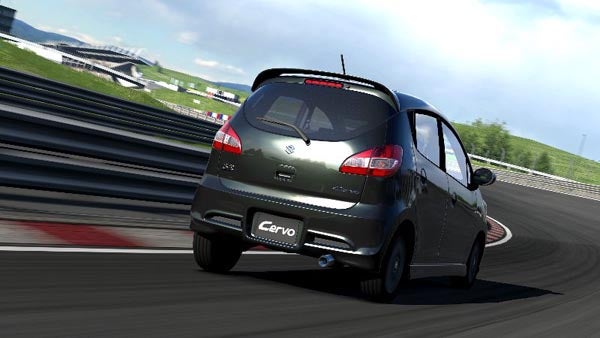 On the basis of GT5 Prologue it has a fighting chance. That’s partly because it’s the first Prologue that actually feels like a proper – albeit stripped-back – Gran Turismo game. We still have to do without all the engine upgrade and car customization features that make Gran Turismo so addictive – though some limited tweaks are brought in later on. However, we do get a decent initial selection of 30 single-player events, over seventy cars, six courses with at least two variations on each and – for the first time in a Gran Turismo – online play. 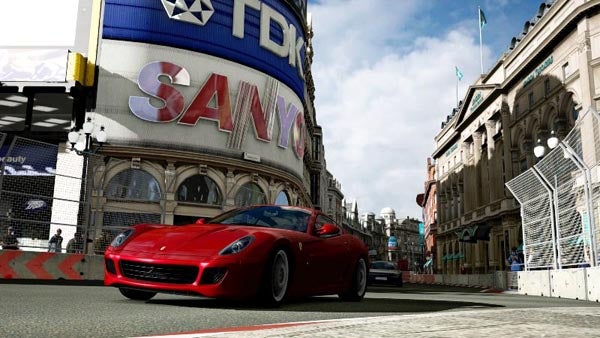 Your first port of call will be the car dealerships, and here you’ll see that Prologue offers a range of models from European, US and Japanese manufacturers, including Acura, Alfa Romeo, Aston Martin, Audi, BMW, Citroen, Dodge, Ferrari, Ford, Honda, Jaguar, Lotus, Mazda, Mitsubishi, Nissan, Subaru and Volkswagen. At one end of the spectrum we get hot versions of everyday favourites like the Renault Clio Sport, Mini Cooper-S or our Editor’s beloved Ford Focus ST. At the other we get dream cars like the Ferrari F430 or the Aston Marin DB9 Coupe (but nothing from Porsche! – ed.). In between sits a strong line-up of hot hatches, new-school muscle cars, 4WD favourites and supercars. While 70-odd cars is less than you’ll find in PGR4, let alone Forza 2 or GT4, the actual selection has been carefully skewed towards the European audience. Basically, if you’re a fan of the televised activities of Messrs. Clarkson, May and Hammond, you’ll doubtless be very chuffed indeed.

Once you’ve chosen your first car, it’s off to the first of three sets of events, ranked in order of difficulty and in terms of the sort of vehicle you’ll need to complete them. As in previous GTs, there are open races plus races that are specific to certain types or even models of car. The good news is that there are no boring license tests to work through first and that the events themselves scale up fairly well, with an additional, extra-tricky set to work through once you’ve completed the initial bunch. It’s difficult to imagine anyone who has played a Gran Turismo game before struggling with the early races, but as things go on the events begin to get more challenging. Sticking to the same tracks gives you a chance to get used to the straights and corners, but by the time you’re halfway through the intermediate class you can expect to spend some time honing your racing line and your technique. 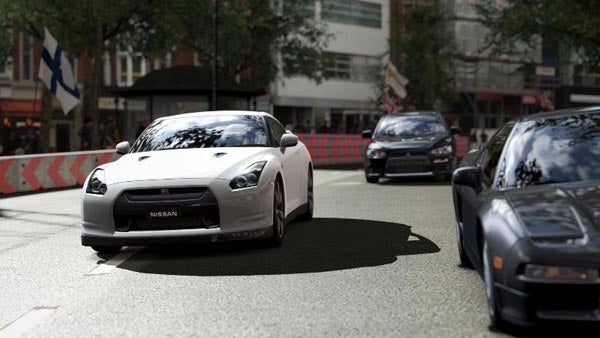 Let’s get to the meat, then. How does racing in GT5 Prologue compare to racing in GT4? Well, needless to say it’s a better looking experience. Sony is right to boast about the new car models, which apparently use 200,000 polygons where GT4 used only 4000. They’re incredibly detailed, beautifully shiny and all boast convincing in-car views, making GT5 Prologue the best game for fans of car-porn yet. The scenery is also pretty gorgeous, from the mountainous Eiger track familiar to players of Gran Turismo HD to a central London course that shows Project Gotham 4 how it’s done. 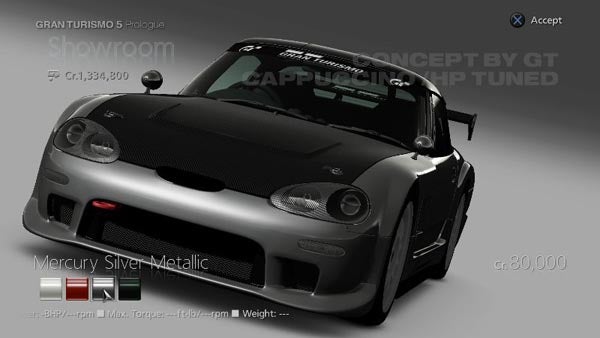 What pulls it all together is the lighting system. Polyphony was getting this right back in the primitive days of the original PlayStation, and on the PS3 there’s something so coherent and perfect about the lighting that even PGR4 can’t quite compete with it. Check out the highlights and reflections on the car, the way shadows move across the track or the way the camera adjusts to the brighter conditions when emerging from a tunnel, and you can appreciate why GT5 Prologue is a new graphical benchmark for the genre. On the other hand, it misses out on one thing PGR4 does have: weather. Is this a feature Polyphony has planned for the real thing, or does GT only do bright sunshine and warm tones? We’ll just have to wait to find out. 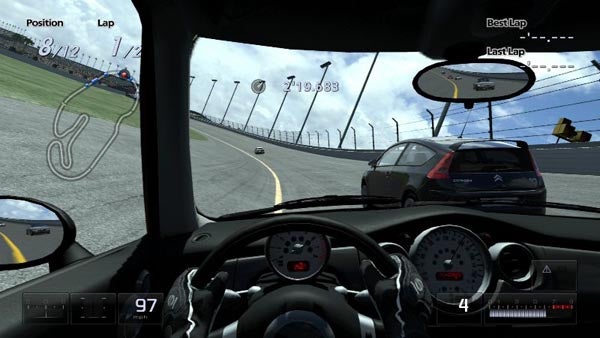 However, graphics have never really been the issue. What is, is that while GT has always offered the best driving experience, it hasn’t always offered the best racing. Let’s be clear. Even post PGR4, Forza 2 and TOCA Race Driver 3, GT4’s handling is the best in the business, and GT5 Prologue carries on in the same tradition. For the first time we get a choice between a Standard physics model and a Professional model, with the former aimed at casual gamers looking for a more arcade racing experience and the latter aimed at the simulation enthusiast. The differences are fairly subtle, particularly when playing on a control pad, but the Professional model is definitely less forgiving of late braking and imprecise cornering, and the feel of tyre on track is even more tangible than it was in GT4. Watch a replay and it’s clear that GT deals with the interactions between wheel and surface and the modelling of weight, downforce and momentum better than its rivals. Play the game, and every car has the right sort of feel. Is GT5 Prologue as punishingly accurate in its physics modelling as, say, GTR2? Nope. Is it as accurate as it can get while remaining an enjoyable mainstream game? You bet.

But if GT is unrivalled when it comes to driving feel, the same can’t be said when it comes to the business of thrilling, fiercely competitive racing. We should be grateful that Polyphony has finally plumbed in an AI system that actually matches the dictionary definition of intelligence. The computer-controlled racers now overtake, make mistakes, attempt to block you and even take the odd risk – just as they should. However, it all still feels a little half hearted. Play PGR4 or Forza 2 and you know that the other guys want to win. Play GT5 Prologue, and they still seem to be playing it safe. We want attitude, we want aggression, and GT5 Prologue still feels like the reins have been left on. Combine this with Polyphony’s increasingly out-of-step avoidance of car damage – Kazanori Yamauchi can blame the manufacturers all he wants, but every other major racing game is doing it – and for all that GT5 Prologue is ahead of the competition when it comes to driving, it’s still behind the best when it comes to putting on a decent race. 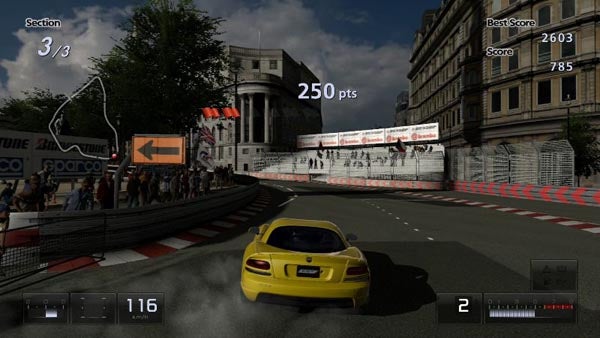 Luckily this flaw has an easy cure: just get your racing kicks against other human beings online. OK, so the features are relatively basic by today’s standards and GT5 Prologue misses out on such fundamental things as a built-in friends list or proper integration of online and offline leaderboards. I’m also not sure that the ability to watch old Top Gear footage from inside the game is much of a draw. What’s more, the actual business of finding a game is a bit convoluted. First you have to pick an event from the current list – first ensuring you have an appropriate car in your garage – then select the start option, then wait for a reasonably long time while the game matches you up with some opponents. You’re also stuck with the preset events, which means you can’t simply select a course and a car class and get on with it as some players would doubtless like. On the plus side, Sony will be continually updating the events list as time goes on – and I’m sure we can expect additional download content too.


However, the actual action is generally very good. Where PGR4 and Forza 2 are stuck at eight players, GT5 Prologue can manage up to 16, and with that many racers on the track there’s a lot of jostling on the corners and testosterone on the tarmac. The game is smart enough to penalise corner cutting, and the only slight oddity is that it also watches for strange behaviour and switches off collision detection if it suspects that this is due to network error. This will doubtless save some annoyance in online games, but it also means that you’re never 100 per cent sure whether you’ll hit the car in front as you take a bend too fast or simply glide straight through it. It’s peculiar, but it’s something you will get used to. 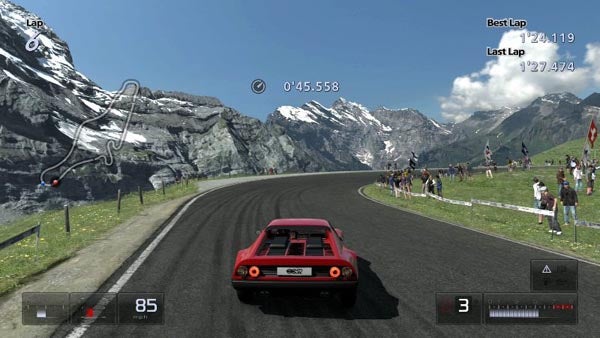 Actually rating GT5 Prologue is a tricky one. It’s only about a half of what we expect from a full price game in terms of content, but then it’s only about a third of a full-price game in price. Judged by the single-player mode only I’m not sure I’d be keen to recommend it, but throw in the online action and there’s easily enough here to keep you coming back until GT5 itself arrives.


The deeper question remains whether GT5 Prologue raises expectations for GT5 itself. Well, the visuals, the enhanced physics model and the improved AI definitely point in a positive direction, but I’m still left with the feeling that there’s plenty of room for the series to raise its game. We don’t just want the ultimate car toy set – we want the ultimate driving game. GT5 Prologue says that this could be possible, but there’s plenty of work to do first.