Before we can talk about what Ridge Racer 6 is, you need to understand what it’s not. It’s not Gran Turismo or Forza Motorsport – games that are as much about the business of turbo-charging engines and tweaking the suspension as they are about performing on the track. Nor is it a Need for Speed or Burnout – there are no cop cars chasing, no neon strips to fit beneath the chassis, no handy shortcuts, and no rivals to takedown or crashes to engineer. No, Ridge Racer is steeped in the oldest racing tradition – when racing just meant racing, accurate physics modelling was non-existent, and you didn’t care whether the Ford GT felt like the Ford GT or New York looked like New York, for the simple reason that the cars and the tracks were all made up. If you don’t get this, then you won’t get the game, full stop. 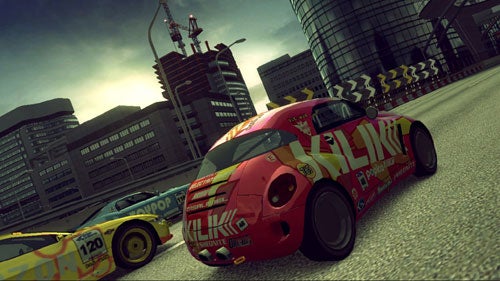 And this attitude can be a shock, even to those of us who have been following the series since day one. In fact, it’s the stripped back style that helps make RR6 so initially underwhelming. I first saw the game back at X05 in October, where – to be perfectly honest – I thought it was a waste of time. The handling was awful, and there seemed little point in bringing something that looked and played so similarly to PSP Ridge Racer to a next-generation, high-definition console. After all, what looks jaw-dropping on a handheld doesn’t smack quite the same gob on your TV.


My first impressions of the finished product were better, but only in the sense that mediocre is better than wretched. The handling was improved, the car graphics looked great and the courses had developed some background detail, but the pace was too slow and the competition was too easy. On a machine that can already boast Project Gotham 3 and Need for Speed: Most Wanted, you really don’t need this bland arcade racer – or so I thought. 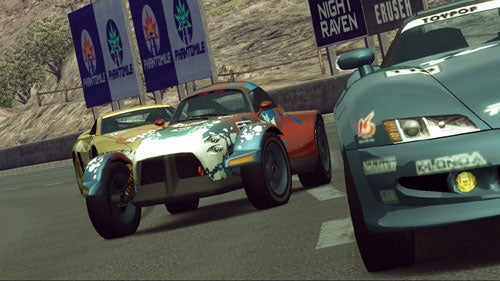 How wrong I was: a few hours later, I was hooked. To explain why, you need to understand the structure. The PSP world tour has transformed into a Ridge Racer universe to conquer and explore, but it’s a universe that isn’t particularly fascinating until you’ve left the early stages well behind. You get a grid of races that can be linked together into a series of events, the speed growing faster as you move right, the competition getting more intense as you move up. Certain races bag you new cars, while others act as nexus points, opening more links and races up. However, it’s only once you move into the second and third speed classes that the action heats up past lukewarm. 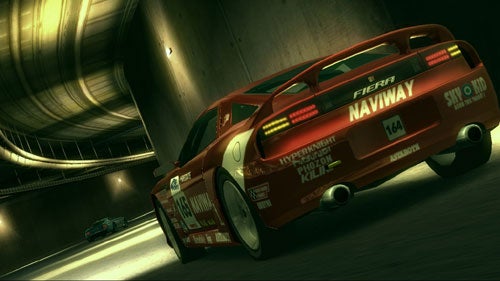 In class two, you’re starting to work for first position. By class three, you have to sweat for it, and it’s then that the experience turns into what I’m told psychologists call “flow” – a state in which you’re so absorbed in an activity that nothing else seems to matter. Once you reach this point, RR6 does “flow” better than just about anything outside of WipEout Pure, a classic scrolling shoot-em-up or a really, really good deathmatch FPS. It’s that utterly-focused, blood-racing, must-remember-to-breathe feeling where you could be told that the house was on fire or the Martians were coming and you wouldn’t do much except nod and grunt. Maybe this isn’t a good thing, but it sure feels right. 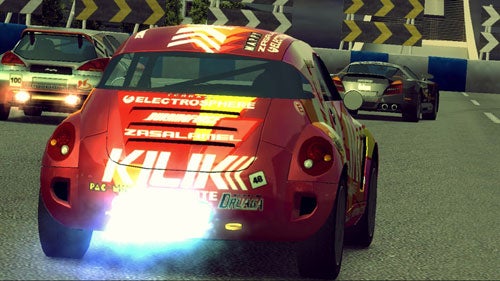 It’s the handling that’s the kicker. As the speeds increase, corners that you once eased your way around start posing problems, and the bumps, twists and sinuous downhill sections magnify in challenge. As with the best Ridge Racers – Type 4 and the PSP version – the handling doesn’t even attempt to be realistic: you just get ‘standard’ drift cars that seem on rails and coast smoothly around bends, ‘mild’ drift cars that have more of a tendency to lateral movement, and ‘dynamic’ drift cars where, frankly, all bets are off. Why choose the latter? Firstly, they usually offer higher top speeds and faster cornering. Secondly, the more you drift, the more you add to your Nitro gauge. Fill up one cell of this and you can harness a quick boost of speed. Fill up more (up to three) and you get a bigger, longer boost. Needless to say, harnessing your nitro is a key skill for RR6 success, and that means – at the higher levels of play – you need to get your head around the mild and dynamic drift cars. It’s tough to begin with, but once you can pull those daring corners off, the feeling is horribly satisfying. 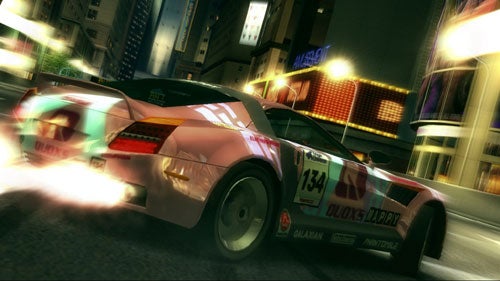 It’s not just a game that plays better the more it goes on; it’s a game that looks better too. While there are some bare stretches of track, you start to appreciate the glorious scenery – the windmills, waterfalls, crumbling walls of old townhouses and winding coastal roads – and the way in which, by varying the lighting and the route – Namco has made fifteen tracks seem like more. The fantasy cars look ludicrous, but great, and there is something very clean, very slick and very Japanese about the whole design. RR6 hasn’t got Project Gotham 3 levels of detail, but it’s classic Ridge Racer, through and through. 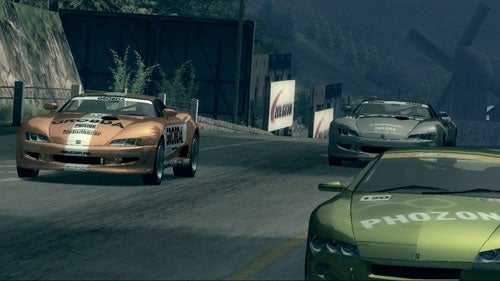 Admittedly, I’m not quite so pleased with the sound. The music is pretty good, albeit in a slightly cheesy, nineties sort of way, but that loony commentator is back, and just as Chris Tucker’s exclamations are guaranteed to spoil your experience of Rush Hour and Rush Hour 2, so this guy’s are guaranteed to annoy you, race after race after race. After two thousand repetitions of “that’s some crazy nitrous” or “that’s the greatest start I’ve ever seen” you’ll be delighted to hit the sound options screen and turn his ghastly waffle down. 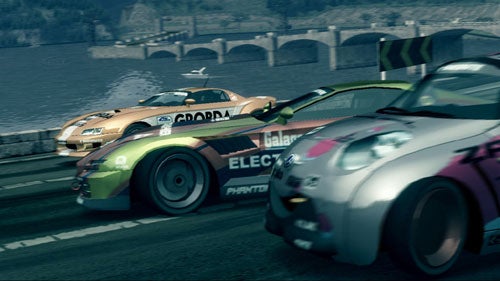 Wait – I haven’t even got to the really good bit. After three to five hours or so (depending on how many races in the route you take) you hit the end of the basic route, the credits roll, and practically a whole new game opens up. Suddenly you hit special routes, new styles of race, a multitude of tense and unforgiving one-on-one duels, and the sort of gameplay that really sorts the Ridge Racer men from the Ridge Racer boys. Beating and gathering the new custom cars and setting new records becomes awfully important, and the game gets about as compelling as good racers get. If you’re a long-term Ridge Racer fan, you might think you’ve found the Promised Land.


You’ll know you have when you reach for the online options, and realise that the game not only offers ranked global time trials but smooth, 14-player racing. It might not be newbie friendly – the overall standard seems fairly high – but competition is intense and, for once, you’re not worrying about your choice of car or whether you should race in cockpit or bumper-cam view – you’re just wondering whether you have the skill and the guts to move faster, break later, and hit the next corner harder than the next guy. Ridge Racer 6 is like Quake 4 deathmatch, while Project Gotham 3 is akin to Battlefield 2: it’s harsher, less intricate and more brutal, but every bit as compelling. 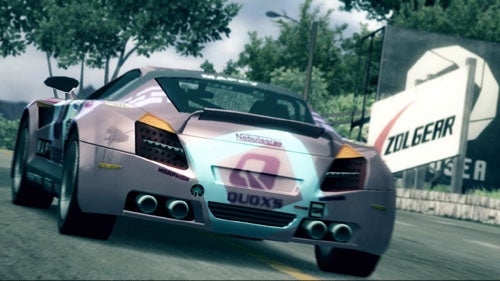 Needless to say, existing Ridge Racer fans should enlist straight away. Otherwise, you need to think hard about what Xbox 360 racing game is right for you. If you’re looking for detailed reproductions of real-world cars and courses, Project Gotham 3 is still the best bet, while Need for Speed: Most Wanted has that mainstream-friendly mix of fast-paced racing and reckless destruction. This leaves Ridge Racer 6 as one for the purists, but if so it’s the most exciting and enthralling purist’s racer around.


Kicks off like a Ridge Racer V style disappointment before transforming into the best Ridge Racer since Type 4. An essential buy for fans of classic arcade racing.