Available on Xbox One, PS4, PC, Xbox 360 and PS3
Say it loud and say it proud: The Call of Duty comeback starts here. You might argue that the world’s biggest FPS series never went away, but last year’s next-gen debut, Call of Duty: Ghosts, saw sales and review scores slip, while the previous instalments, Modern Warfare 3 and Black Ops 2, showed a series in serious danger of stagnation. While Call of Duty still has legions of fans, it’s been a while since you could admit in polite company that you were one of them.

Advanced Warfare won’t change that entirely. It is still Call of Duty, and everything the hipsters like to mock about the series – its linearity, its migraine-inducing bombast, its woefully thin plot lines, its follow the objective marker approach – is still here to be mocked. But if you liked Call of Duty 2 and 3, loved Modern Warfare and its first sequel and enjoy being dragged along from one big action sequence to the next, then Advanced Warfare will be right up your street. 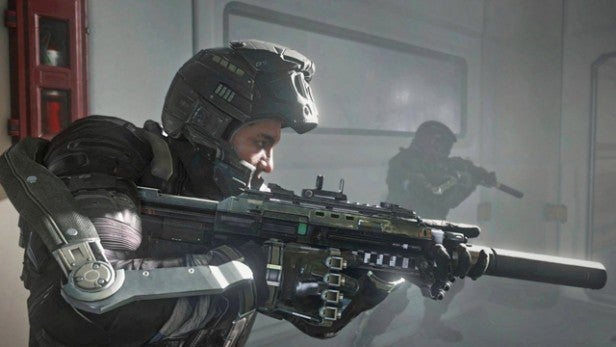 It’s not that the team at Sledgehammer Games has done anything all that new or all that innovative, but they have done it with a confidence and focus that the series hasn’t seen in years. It’s not a thinking man’s shooter, but who cares when dumb is this much fun?

The game changers here are the game’s near-future setting and, more specifically, the exosuit. You’ll find yourself donning three variations of the strength-enhancing exoskeleton at different stages of the campaign. The first – the assault exosuit – gives you a jet-assisted set of jumping and gliding manouvres, plus (later on) a handy grappling hook. The second, the specialist exosuit  – gives you a fold-up riot shield, an instant health recharging stimpack and an overdrive ability, which effectively works like the slowmo abilities found in F.E.A.R. or Max Payne. And the third? Well, we won’t spoil it for you, but if you feel kicked around during some stages of the campaign, please comfort yourself with the knowledge that payback will eventually come your way. 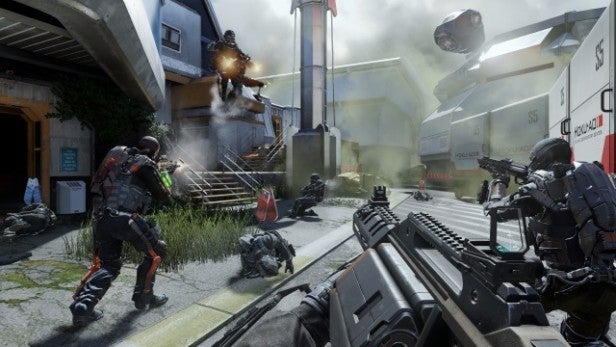 The exosuits don’t always change what you’re doing, but they will change the way that you do it. Why cower behind crates taking pot shots at the generic terrorist scum when you can leap into the air, slam down on half the squad then get down to the serious business of shooting the survivors in the face. Caught out of cover? Activate the specialist suit’s shield and soak up the bullets while you trudge to safety. Walls are no longer barriers. Leaps from window to window or rooftop to rooftop become child’s play. Snipers on a catwalk? Stay low and try to blast them or jump up there and take the battle to them. The choice is yours.

The suits are complemented by other advanced weaponry. There are enemy detecting grenades that make a nice one-two combo with guns that dish out headshots through interior walls. There are homing grenades and drone-wrecking EMP grenades, walking mech tanks, magnetic climbing gloves, remote controlled sniper drones, handheld railguns and something that works suspiciously like a sci-fi raygun. Sledgehammer has told us that all this sci-fi weaponry is based on real military research, but even had it just been made up we wouldn’t care. Where all the future tech in Black Ops 2 seemed to bog the action down, here it makes it twice as exciting, double as explosive. 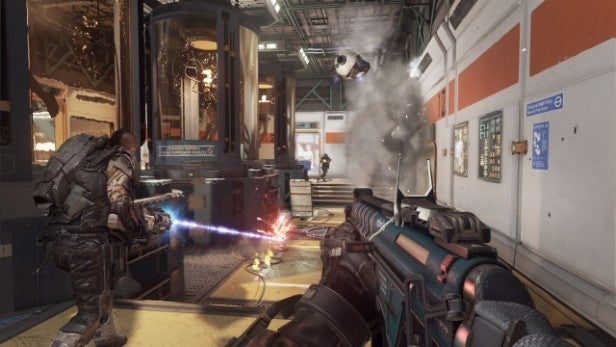 The campaign missions, meanwhile, are impressively well conceived, each one riffing on familiar Call of Duty set-ups – the infiltration mission, the big assault, the VIP rescue, the recon mission, the defence against a completely unexpected surprise attack – but amplified for the power of the exosuit. In the most generic of the missions you can have fun trying out new strategies on old situations. In the best, you’re given more space to try different approaches, using the exosuit and the grappling hook to move rapidly around large urban battlefields, using mobility and shock tactics to whittle the enemy down.

Advanced Warfare works on the same level that the original Modern Warfare worked: as the biggest, most spectacular action movie around, only this time you can play it. There are frantic chase sequences on foot, jet-bike and futuristic mini-speedboat, not to mention a dazzling highway chase that’s one part Die Hard and one part The Matrix: Reloaded. Think the sinking battleships in Battlefield 4 were impressive? Just wait until you see what Advanced Warfare can do with a major US monument and a lot of traffic. It might not have much subtlety, but the latest Call of Duty has no shortage of gusto. 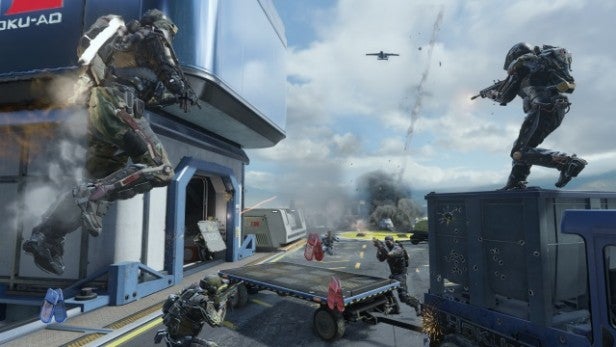 The visuals are equally impressive. Where Ghosts struggled to make a case for itself as a proper next-gen Call of Duty, Advanced Warfare manages it effortlessly. From the detailed character models to the detailed environments and cinematic lighting, it’s a stunning-looking shooter. You’ll be dazzled by the big moments – by swarms of drones attacking along a high-tech Baghdad boulevard, or chaos on the streets of a near-future Lagos – but you’ll also be amazed by smaller things, like the picturesque scenery of Santorini, or the slick interiors of a billionaire’s compound. It’s not going to go toe-to-toe wth Crysis 3 or Far Cry 4 on the lifelike vegetation front, but if you’ve splashed out on a high-end GPU or next-gen console, then Advanced Warfare will do a fine job of showing it off.

Turn up the speakers or don some headphones while you’re at it, too. Not only does Advanced Warfare have the traditional epic score, but it has the best gunshot and explosion effects we’ve come across in a big-name shooter. Some of those high-tech shotguns and sniper rifles make a mighty thwomp, and in the midst of a big battle it’s wall-to-wall surround-sound carnage. 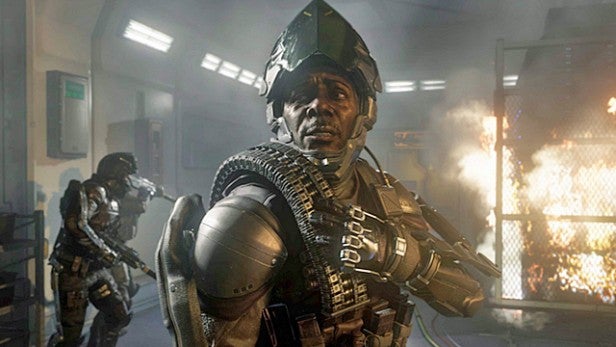 Some might say that Sledgehammer could have been more ambitious, making its battlefields more open and giving you a choice of exosuits and abilities with which to tackle them. It’s frustrating that you don’t always have access to every ability, and that certain abilities are clearly meant to be used at specific moments. It’s also a little silly that you can only grapple to set points. Yet as interesting as a more freeform Call of Duty might be, you’d have to wonder if it would still be Call of Duty, and whether it would be as thrillingly well-paced as this.

No, if the single-player campaign has any weaknesses, it’s a slight over-reliance on quick-time events (quick, tap X or you’re dead meat) and a predictable storyline. Casting Kevin Spacey in a major role can never be a bad idea, even if the motion captured performance isn’t quite as convincing as you might expect. However, you can see the plot twist coming from a mile away, while the beats are straight from the generic action blockbuster playbook. We like the straightforward, single-character story arc and the appearance of (for once) a tough female character who’s as capable as the men. All the same, you won’t get too many surprises. 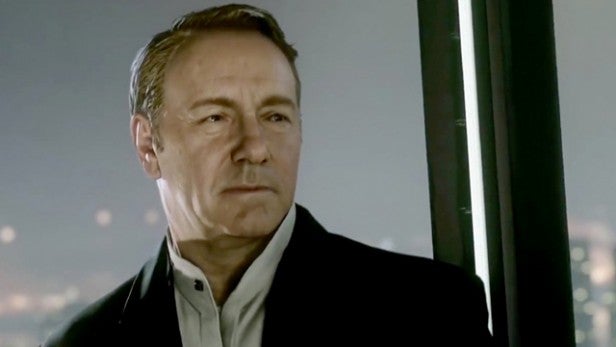 The multiplayer, meanwhile, feels like a Call of Duty multiplayer greatest hits, with the exosuits providing the equivalent of the exclusive extra tracks. This isn’t a bad thing. Advanced Warfare gives us the series’ best customisation options yet in the shape of a reworked version of Black Ops 2’s Pick 10 system, but now expanded to Pick 13. You can customise your avatar not just with different gun load-outs, but different killstreak perks, different exosuit abilities and different passive boosts.

You can then customise them further with wild cards, allowing you to swap your secondary weapon for an extra primary slot, or swop your passive boost for additional exosuit powers. The only catch? Each choice has a point cost, and you can’t spend more than 13 points. It all seems impressively well-balanced, and while different weapons and options only unlock as your character levels up, you still don’t feel too overwhelmed by superior firepower as a noob. 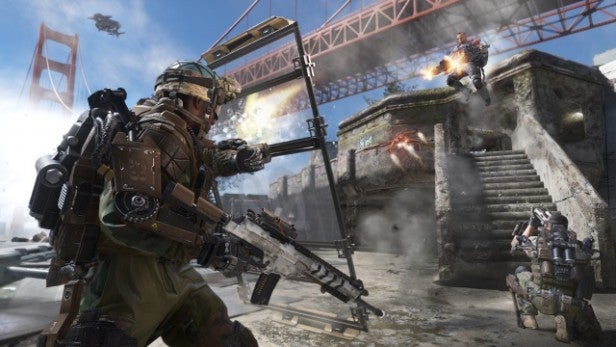 You also get a fantastic selection of modes, including a slightly bizarre military variant of basketball, where teams fight to collect a spherical drone which then has to be hurled towards a goal, and the ever-wonderful Kill Confirmed: the mode that cowardly custard snipers hate, because you only score when you collect the dog tags. There are large scale team deathmatch and domination modes, plus capture the flag and free-for-all. The maps, meanwhile, are a little short on spectacle or landscape-transforming events, but they have a good flow to them, with enough routes, choke points and wide open spaces to make exploring them worth your while.

Advanced Warfare even throws a bone to novice players with its Combat Readiness Program: a simplified team-deathmatch with no leaderboard, no kill-cams and nothing else to make new players feel bad about sucking at the game. It’s accessible and less of a meat grinder than regular multiplayer, though some of the players encountered seem suspiciously good to be total newcomers. Come on, guys, get out there and find yourself a real match.

See also: 10 game sequels we’d like to see on Xbox One and PS4 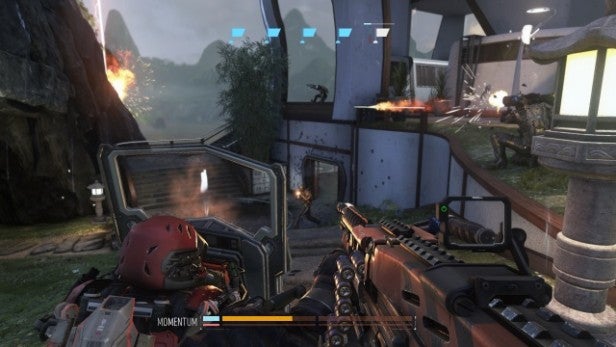 It all still feels like classic Call of Duty, and there’s a danger that you’ll forget about your exosuit’s jetpack and all those high-tech goodies. Take advantage, however, and you’ll find new opportunities to move around the maps, reach vantage points, surprise the aforementioned cowardly custard snipers, and hit hard with a fantastic downwards slam. With practice, you start chaining moves together, so that jumps and slides become as integral as headshots and strafing. Advanced Warfare multiplayer can’t match the scale of Titanfall or its beautifully fluid motion, but – like the rest of the game – it feels like a  supercharged version of the premium Call of Duty experience. When it all comes down to it, who’s really going to moan about that?

Verdict
Advanced Warfare doesn’t reinvent Call of Duty but it does revitalise it, with the strongest single-player campaign since the original Black Ops and a best-of-breed multiplayer offering to match. It’s still a linear, spoon-fed sort of action game, but so big, bold and spectacular that it carries you along. It’s a brilliant, big, dumb blockbuster action movie of a game, which hurls you relentlessly from one huge set-piece to the next. That kind of thing isn’t for everyone, but no series does it better, particularly when it’s back on its top form.