Let’s face it: by this point, the Call of Duty games are practically critic proof. Like a new Coldplay album or a Pirates of the Caribbean film, it doesn’t really matter whether the pundits rate it or slate it; it will sell a gazillion copies anyway, both in the UK and across the globe. By now, a sizable number of you will already have completed the single-player campaign and got stuck into the game’s multiplayer mode, and you’ll be making your own minds up whether this is the best or worst Call of Duty yet, or something in-between. It would be ridiculous to try and pretend otherwise. 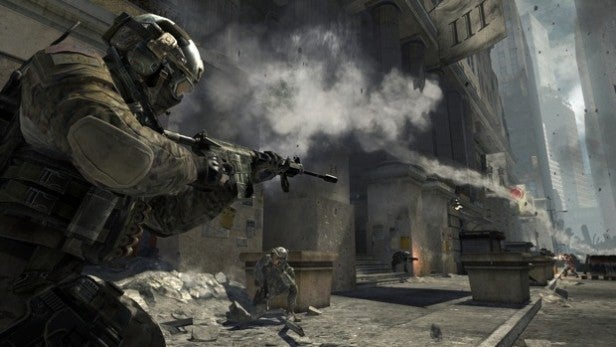 Still, not everyone will be a day one purchaser, and there will doubtless be some readers wondering how the third Modern Warfare measures up. After all, the development team at Infinity Ward has gone through massive changes of leadership and personnel, and Modern Warfare 3 is very much a co-production between Infinity Ward and new team, Sledgehammer Games. There’s plenty of reason to fear that the Modern Warfare magic has been lost.

Well, there’s good news here – and a little bit of bad. Modern Warfare 3 is very much what you’d expect from a Modern Warfare title. It’s a game of spectacular set-pieces, hard-hitting action, bombastic mass-destruction and a genuinely gob-smacking disregard for moral boundaries. It’s heavily orchestrated and incredibly linear, and it boasts a storyline that’s equal parts Tom Clancy and Chuck Norris. If you loved Modern Warfare and its sequel and you really want more of the same, then your wish has been granted. In fact, it’s almost exactly the same in every way. 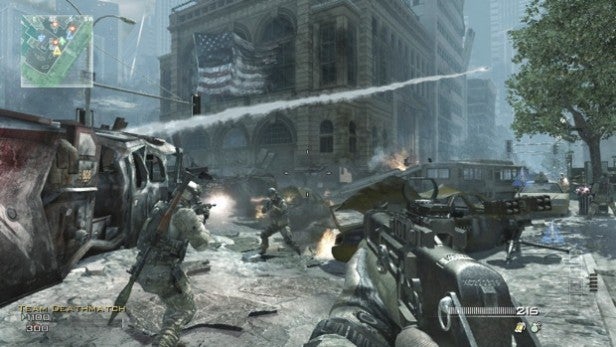 Let’s give Infinity Ward and Sledgehammer Games due credit here: it isn’t easy to do this stuff as well as Modern Warfare 3 does it. At heart, you know that you’ll spend the majority of the game following another guy from object to objective, pausing every now and then to duck behind a wall and blast away at a gang of military goons, then moving on to the next checkpoint to do it all some more. You know that the action will vary between run-and-gun assaults, sniper missions and last-ditch defences – often within the space of a single level – and that you’ll have occasional scripted action hero moments and the odd turret or drone-piloting sequence to spice things up. On this level, Modern Warfare 3 poses few surprises. 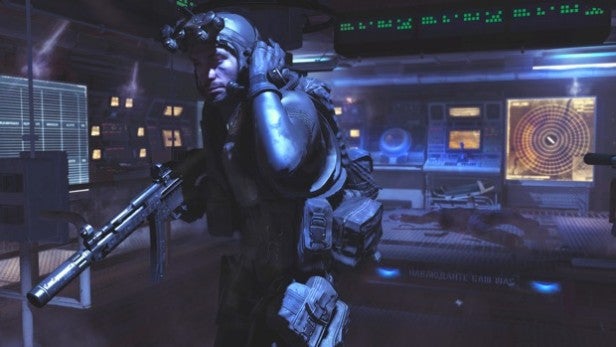 Yet what hits you the more you play is how well-constructed the experience is. Where Battlefield 3’s Modern Warfare-inspired campaign stuttered, bored and frustrated across the meandering progress of each mission, Modern Warfare 3 is always doing its best to be the best damn Modern Warfare it can be. The difficulty level is always just right, each level always has some new twist and the game works hard to deliver real moments of shock and awe. In cinematic terms it’s more Michael Bay and Roland Emmerich than JJ Abrams or Steven Spielberg, but as the action moves from India and New York to Somalia, London, Paris and Prague, you can be safe in the knowledge that you’ll see cities ravaged, trains wrecked, battleships destroyed and national monuments wiped out. No other FPS throws so much carnage up on screen.

What’s more, the levels pack in some genuinely brilliant moments that actually do give you an experience that no FPS has delivered before. Having had them spoiled for us we have no wish to spoil them for you, but if the game doesn’t give you one jaw-dropping moment every half-hour or so, then you’re probably so jaded that you really shouldn’t play this sort of thing. 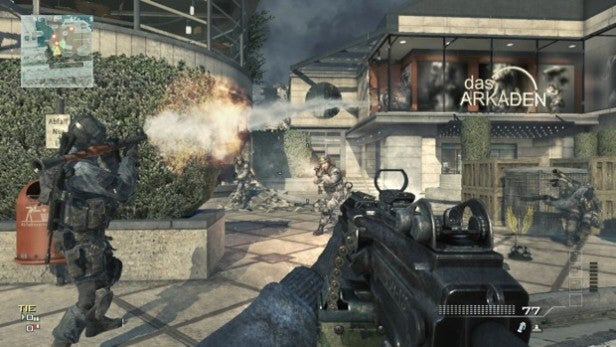 But then you might have good reason to feel jaded. When we said ‘almost exactly the same in every way’, that’s also a criticism. The fact is that there are huge stretches of Modern Warfare 3 where it becomes all too apparent that the series is recycling its own ideas. Maybe it’s inevitable, but over three Modern Warfares and last year’s (not dissimilar) Black Ops, we’ve already had enough battles through public buildings, shanty towns and civic squares to fill a lifetime, and all kinds of stealth and sniper missions, rooftop chases and bits where you rain down fire from a handy drone. While we wouldn’t say that Modern Warfare 3 is ever boring, the familiarity is beginning to breed some contempt. It might just be that – as far as the single-player campaign goes – this style of game has gone as far as it can go. 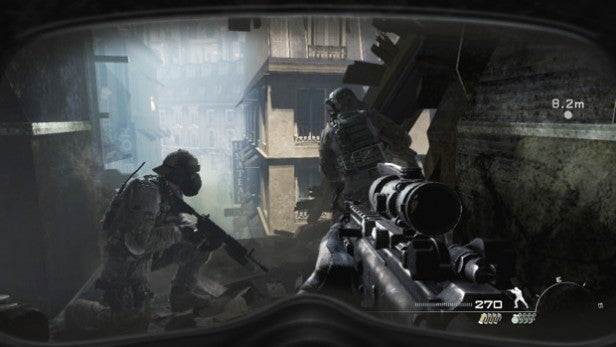 In multiplayer, of course, there’s just no time to think anything so negative. Two changes mark this entry out. First, Killstreaks have been reinvented to reward other activities beyond simple slaying, and the perks have now been reinvented as three ‘strike packages’ – Assault, Support and Specialist – which should, theoretically, keep the game more balanced and encourage different styles of play. Meanwhile, a new Kill Confirmed mode adds a twist to standard team deathmatch. For kills to count you have to collect the glowing dogtag dropped by your dead foe. What’s more, by collecting them from your own downed team-mates, you can deny the enemy team their score. This mode stops any cowardly custard snipers from racking up the points – they have to move if they want to make progress – and it adds a little strategy to the headshot-happy, kill-or-be-killed CoD experience. 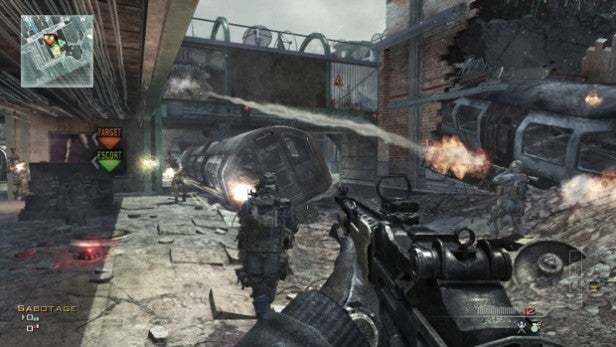 Frankly, twitch-heavy, competitive multiplayer FPS action doesn’t get much better than this, and CoD veterans won’t have any problems upgrading from Black Ops to Modern Warfare 3. Of course, noobs and the less committed might still find it hideously inaccessible; a game where they spend more time looking at the killcam and respawning than actually playing the game. Multiplayer CoD demands a level of devotion before you can get much back, and if you haven’t caught the bug by now, then it might be too late to really get started. 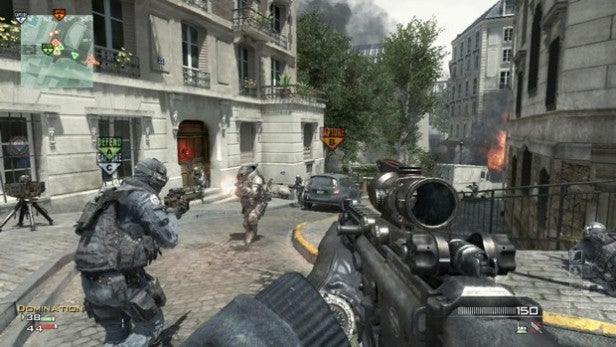 Luckily for those of us too wussy for the competitive stuff, Modern Warfare 2’s Spec Ops missions are back, with 16 new missions of dedicated co-op goodness, and a brand new Survival mode that turns the multiplayer maps into fraught battles against wave after wave of enemy troops. In a nice touch, several of the Spec Ops missions allow you to replay sections of the single-player campaign from a different perspective – including a few real highlights. All in all, you’d have to look to Gears of War 3, Left 4 Dead 2 or F.E.A.R. 3 for a richer co-op offering, and there’s certainly no other military FPS that does it so well.

Verdict
Modern Warfare 3 is very much the grand finale of a series, and while there are times when it can feel like a ‘Best of Modern Warfare’ with all the old tracks remixed and a few new songs thrown in, it’s still a game that encapsulates all that’s good and bad about this ludicrously popular phenomenon. If you’re looking for a reinvention or, a new direction then, frankly, you’re wasting your time, but for the millions who love Modern Warfare, this threequel sees the series off in style.