Available on Xbox 360, PS3 (tested), PC
How things change. Once Infinity Ward produced the good instalments of Call of Duty, while Treyarch delivered the second-rate efforts you got in between. Since Call of Duty: Black Ops, however, that’s begun to turn around. Black Ops might have had its moments of extreme silliness, but it was more inventive and entertaining than last year’s Modern Warfare 2, and now we have Black Ops 2: the most interesting Call of Duty game to ship since Modern Warfare. Now, being interesting doesn’t necessarily mean it’s an absolute barnstormer, but you can’t accuse Treyarch of sitting still and following the formula. 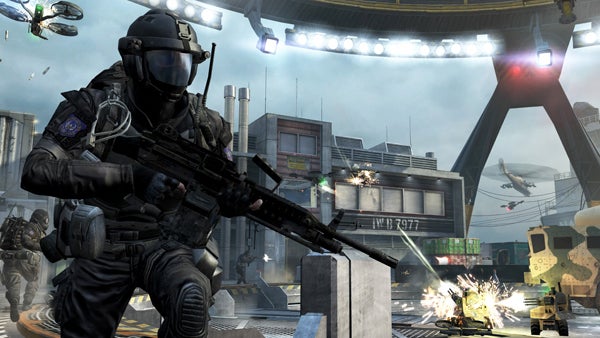 A New Approach
In fact, Black Ops 2 does something you might not expect from Call of Duty: it takes risks. It’s ambitious narrative straddles two periods, shifting between CIA-sponsored activities in eighties Angola, South America and Afghanistan and a fight against a terrorist arch-villain in a near-future world full of stomping, hovering drones, electronic sights and global alliances. It features branching storylines where your actions or failures in one mission might change how things play out later on. Most importantly, it no longer feels like a game where you follow the yellow objective marker from one shooting gallery to the next, doing what you’re damn well told. For the first time in years, Call of Duty allows you to handle some things your way. 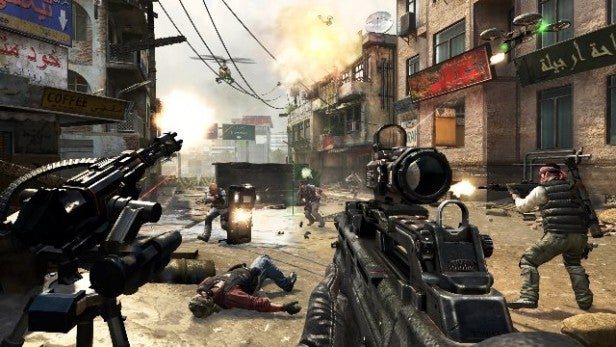 You might not spot this at first. Your movements in the first few levels are as bound to the old yellow marker as in the last few Call of Duties, with the game’s main focus being to make good and sure that you’ll see every noisy, head-ache inducing spectacle it wants to throw your way. Give it time, however, and you’ll notice the levels opening out, with alternate routes appearing and rewards for straying off the beaten track. Let’s not go crazy. This isn’t a military shooter take on Deus Ex: Human Revolution or Dishonored. You still spend much of your time being hustled and bustled from one set-piece to the next, shooting all the bad guys before rejoining your AI buddies so that they can activate the next door or set-piece. However, given that Modern Warfare 3 often dragged you through the game like a slack-jawed imbecile who couldn’t really be trusted to even shoot straight, this is a definite step in the right direction. 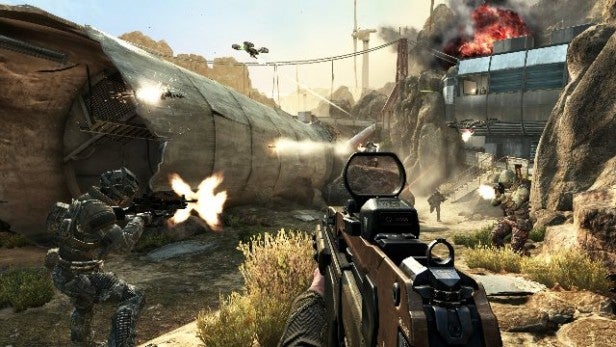 What’s more, the game goes further with its Strike Force missions. These have you tackling several defensive or offensive objectives with the aid of a couple of infantry units, turrets and drones, in a kind of tower-defence/real-time-strategy/shooter hybrid. You can switch rapidly between a tactical map and a first-person viewpoint, meaning you can plan the overall strategy while taking part in the battle yourself. It’s not entirely convincing – the controls aren’t intuitive and your allied AI is so poor that it’s tempting to just do everything yourself – but it’s still good to see the series stretching. There are ideas here that a future Call of Duty could explore.

Tales of the Unexpected
And here the storyline and setting make a difference. Despite a writing credit for The Dark Knight’s David Goyer this isn’t the most subtle or sophisticated tale, but it’s still a cut above Modern Warfare 2 and 3, daring you to think about your enemies, their motivations and what really differentiates them from your friends. For once, the characters are more than one-dimensional. Future technology, including camouflage suits, controllable drones, a very neat drone spider and some brilliant electronic sights, make a major difference to the game, as does having drones as well as humans deployed against you. 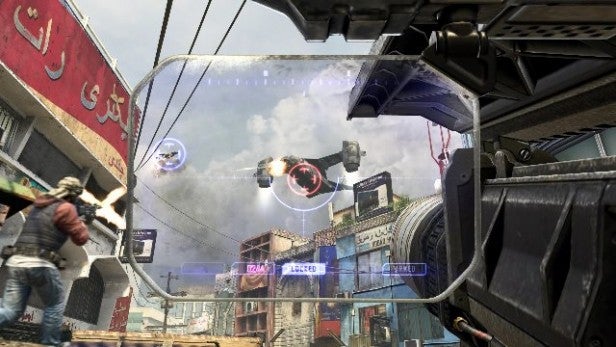 Throw in some surprisingly inventive levels, featuring floods, horseback battles and flying wingsuits, and you have a Call of Duty that’s always spectacular, but not always that predictable. To be clear, this doesn’t mean it’s consistently brilliant. The thrills aren’t always there, or you get stuck in another lazy assault on a secret base, or your standard-issue ‘defend this space’ sequence. When it does work, however, you’re reminded why Call of Duty became so big in the first place: no other military shooter works harder to give you dumb action movie thrills.

Multiplayer
It’s not just the single-player game that has been shaken up. Black Ops 2 doesn’t add an awful lot to the competitive multiplayer element in terms of modes or the basic look and feel, but there are some fundamental changes that affect the experience for the better. Newbies or base incompetents will like the more relaxed Combat Training playlists, where you can fight with a mix of novices and bots while you gain some XP and move up a few levels, and those Killstreak rewards have now been replaced by Scorestreaks, where the game’s deadly toys are now earned by earning points, not simply killing, helping players who actually care about objectives in objective-based modes. 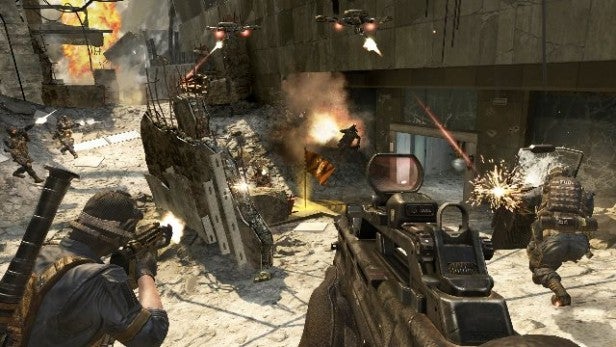 Playing multiplayer Black Ops 2 is still a hectic, fast-moving and often brutally unforgiving experience, but it’s surprisingly rewarding for all that. The new maps cover the range between compact, fast-flowing bloodbaths and larger, more open zones with sniper points and choke points, and the quality is generally very high. If you don’t like online Call of Duty then this won’t change your mind, but if you do, then you won’t be disappointed. 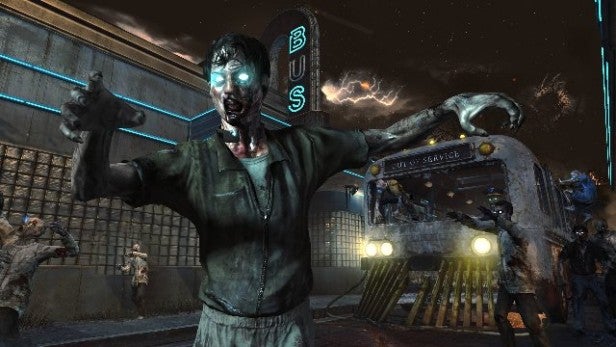 Resurrecting Zombies
Finally, Treyarch has got serious about Zombies mode. Once a throwaway extra, this has now evolved into the third pillar of Black Ops 2, with a new, more complex campaign, Tranzit, that sees players hop on board a bus to move from one last-stand situation to the next. Like Strike Force, Tranzit feels like a great idea that hasn’t been quite so well executed. There’s little explanation of how it works, and at first it’s a bewildering experience that might send many players going back to the more straightforward and more immediately entertaining survival options. Again, though, it leaves you feeling that this might be the start of better things to come, and that there’s room for a Call of Duty/Left 4 Dead hybrid in this world. We would hope, however, that Activision can fix some of the issues we’ve experienced on PS3. Dropped connections and frozen consoles shouldn’t be appearing on a game this big. 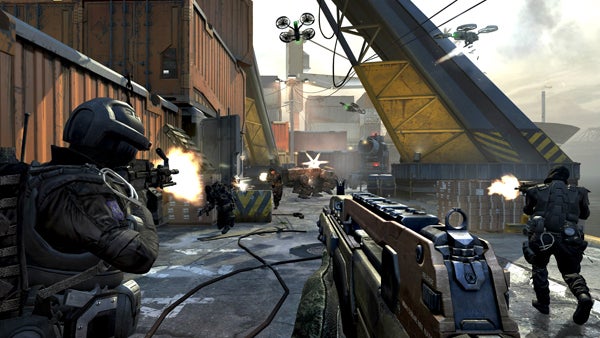 Graphics and Sound
As far as presentation goes, Black Ops 2 is a slightly odd beast. On the one hand, it’s not hard to see where money has been lavished on the visuals, the music, the sound design and the voice talent, with Hollywood names like Sam Worthington and Michael Rooker on board. There are some impressive lighting, water and weather effects, and you could never say that the game looks rough. All the same, the engine is beginning to show its age, particularly in comparison to Crysis 2, Halo 4 and Uncharted 3. At times, it’s all a bit too grainy, a bit plain, or just a little lacking in detail.

Verdict
Call of Duty: Black Ops 2 takes more risks than you might expect from such a blockbuster series, and while these don’t always come off, enough do to make it the most interesting and unpredictable Call of Duty since Modern Warfare. A degree of inconsistency means that the single-player campaign isn’t quite up there with the series’ best, but it’s still a big improvement on Modern Warfare 3, and the multiplayer and Zombies modes are good enough to stand up against the competition from Battlefield 3 and Halo 4. Black Ops 2 isn’t going to convert lapsed fans or haters, but it gives us all some hope that there might still be a truly great Call of Duty in the future.