It began with a developer wanting to ride an elephant. According to Far Cry 4’s Executive Producer Dan Hay, Far Cry 4 didn’t begin with guns, freedom fighters, animals or even the lush green tropical country of Kyrat. It began with a developer wanting to smash through a fortress with an elephant. From that one systemic requirement, Far Cry 4 was born and to hear Hay tell it, the game’s size, scope and ambition is pushing new gen tech – and the developers’ creativity – right to the wall.

TR: Far Cry 4 is the biggest open world in the franchise thus far. How big is it, roughly?

DH: I have no idea. If the question you’re asking is ‘is it bigger than Far Cry 3’ then in terms of its physicality I’d say yes and in terms of its depth I’d say absolutely.

Far Cry 3 was somewhere between 17 and 18 square kilometers wide and you would play co-op in a section that was different to that, but Far Cry 4 has the entire open world that you can play in both single player and co-op. It also has a host of new features and opportunities and things for the player to explore. It’s a significantly larger game. 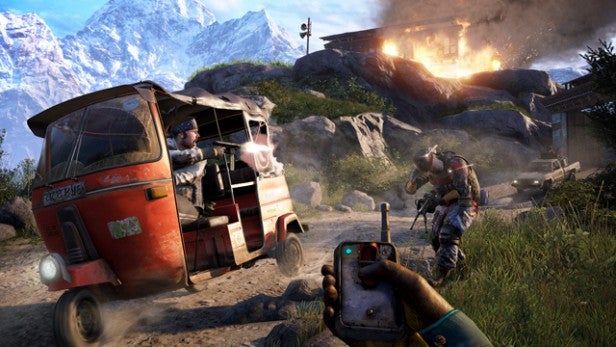 TR: Far Cry 4 is also filled with events, missions, animals and areas you encourage the player to explore. How close to the boundaries is all of this pushing the new gen console tech?

DH: Very hard indeed. I don’t want to sound like too much of a Producer-type here, but the reality is that we want to get as much as we can out of every system. We’re constantly thinking about draw distance. Far Cry is a franchise that’s known for its draw distance and known for allowing the player to see far across the world with the knowledge that they can travel to whatever they see.

Add co-op to that and you have more factors to consider. Players want to be able to travel, say, in a gyrocopter with their friend on the ground on an elephant with obstacles in their way. Our mantra is: ‘be generous to the player’ and with that in mind you have to make sure you pushing as much as you can out of each in-game system. It’s a big challenge.

TR: Does it present problems crafting a linear – or in this case a branching – narrative with a beginning middle and end when the player is always being encouraged and enticed to go off-piste?

Yeah, you kind of have to have that secret sauce to entice the player to go in the way you want them to go. The danger of making an open world game is saying the words: “well, they’re not playing it properly!” The reality is there’s no proper way to play an open world game. Players are going to do what they want to do and in the order they want to do it. It’s smarter for us as developers to lean into that rather than fighting it.

So we allow you an open world that’s expansive, that’s immersive and we allow the player to go in any direction they want. Then we sprinkle in breadcrumbs all over the place. Any player who wants to just progress from mission to mission can do it, but we have a pretty good bet that most players will see a herd of animals, or a fire they can start or a fort they can invade and then within four hours they will totally have forgotten what mission they were on. 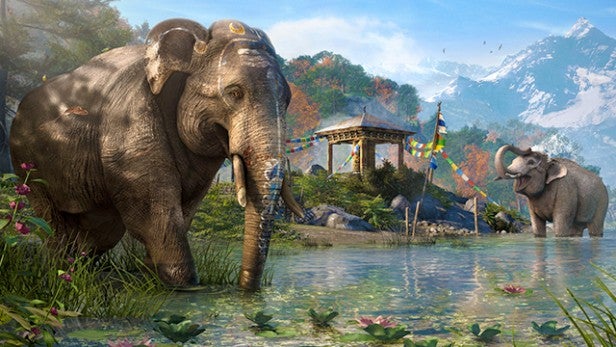 Far Cry 3 seemed to have a lot that was interesting to say about the appeal of becoming capably violent in a harsh terrain – and in turn, how that could be seen as appealing by other people. It almost feels like Fight Club – wandering into rather murky moral territory. How important is it to you that players leave the game thinking about this?

I think that when we ask ourselves what kind of game we’re making, we’re trying to mirror something out of life.

When you leave home, for example, you absolutely know what you believe, what you’re thinking and you know right from wrong – but that’s only what it says in a textbook. There’s a huge difference between experience and knowledge. We leave school with knowledge. We gain experience through triumph, failure, love, heartbreak… We try to build a world that provides that for the player.

It’s a lofty goal to build something that’s going to mirror life. The Holy Grail for me, is a situation where you and I are sitting in a bar in thirty years and you tell me about an experience you had like it’s a memory and I go: “that’s bullshit! That was in Far Cry 4!” If we can do something close to that we’ve hit our mark.

Far Cry 4 has a lot in it that is similar to Far Cry 3 – the FPS mechanics, the radar towers, the colourful villain, drug making and killing animals for levelling. Did the success of FC3 kind of box you in on how much you could innovate with FC4?

There’s two arguments to be made here. The first is that we have a great recipe and we have to look at what we can do to augment that recipe – still push the envelope on what we do – and what’s an acceptable deviation. We don’t work like that.

When we first started talking about ideas for Far Cry 4, we didn’t talk about the location talked about the sort of experiences we wanted to have. We originally thought about continuing Far Cry 4 in the same location as Far Cry 3, but we reached the stage where we wanted to wipe the slate clean and just start with the ideas about what we wanted to do in the game.

Our Game Director, Pat Mathias, said “I want to ride an elephant and turn it into a weapon. I want to use it to smash through a mountain fortress and I want the fortress to be able to fight back.” Everyone in the room was like, “we can’t do any of that!” 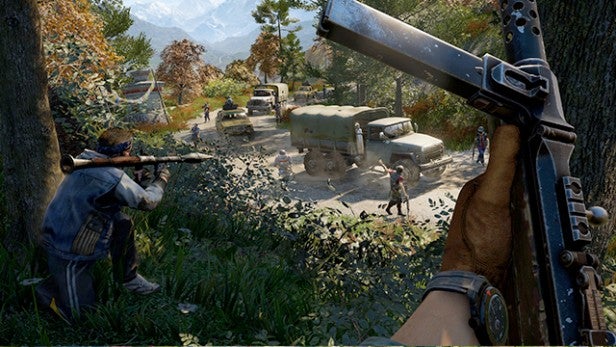 So in answer to your question – no, we aren’t restricted. At the time we had that conversation we couldn’t ride elephants, there were no flying vehicles, we couldn’t control any of the animals, we didn’t have bait, we didn’t have the ‘guns-for-hire’ mechanic and we didn’t even know if we could give any of those features to the player. We wanted everything to be systemic.
There was an amazing moment in development – one of the play-testers was chasing Pagan Min (the game’s antagonist). All we’d done in terms of giving the game an opportunity to respond was we allowed the Pagan Min AI to do what it wanted to do. The Min AI jumped in a truck and the player jumped in a gyrocopter and rained grenades and Molotov cocktails down on the truck Pagan Min. The truck stopped and we thought, well, the players now going to kill Pagan Min.

That’s not what happened at all.

Instead, the AI got out of the truck, ran to a nearby outpost, pulled the alarm and called in reinforcements. Then it got on a mortar and shot the gyrocopter out of the sky. Once the copter landed, the AI was in another truck and trying to run the player over. 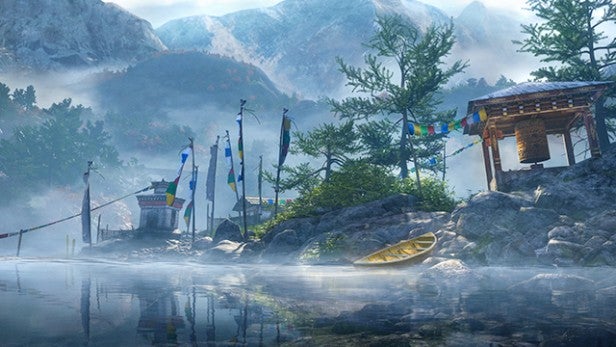 How is that possible – without revealing too much about what goes into your AI?

We try to craft the AI so it looks at opportunities in the game in the same way the player does. It’s really tricky, but going back to your question – do we feel like we’re in a box? No, we consistently smashing through it!