The Sony KD-65A8 is another gorgeous OLED TV. What it lacks in eye-catching brightness it more than makes up for with the precision, refinement and naturalism of its outstanding picture processing. Its innovative Acoustic Surface audio technology means it sounds pretty awesome, too.

Sony A8 OLED price and availability

In the US, Canada and Australia, the A8 OLED is also known as the A8H OLED. There is also the A85 variant, which appears to feature different type of feet for the stand.

If your AV design tastes lean towards minimalist and industrial, you’ll adore the Sony A8 OLED. Its flat fascia is framed with a super-slim frame, and the screen sits low on a pair of small, dark silver feet. Basically the design couldn’t be any less distracting from whatever you’re watching. 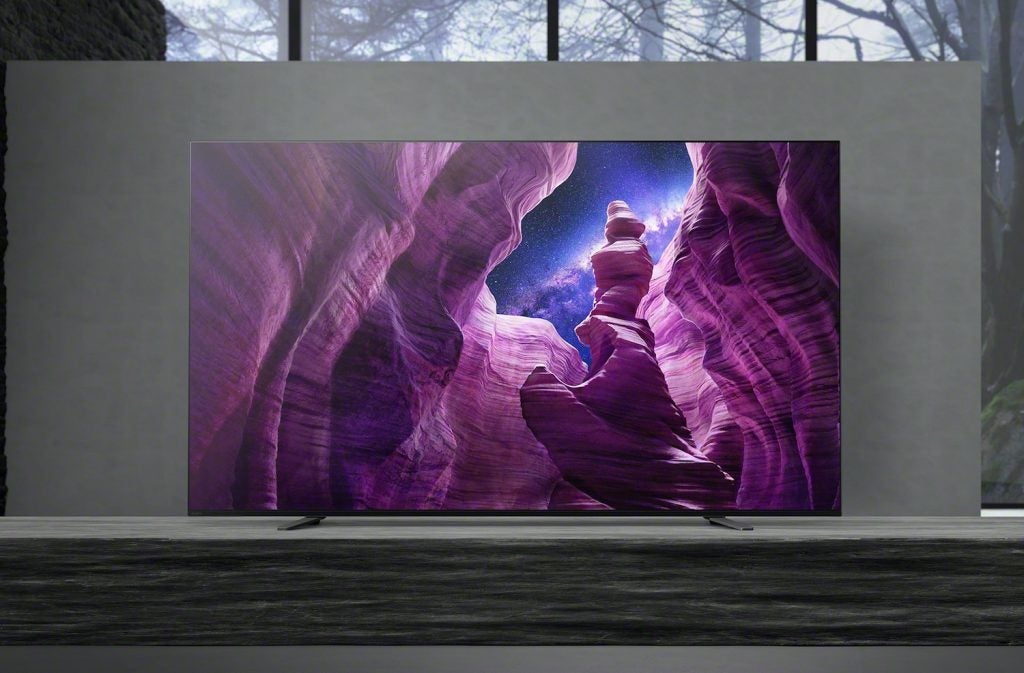 The outer edges sport a fetching brushed metal finish, and although a section of the rear juts out a few centimetres further, the bulge is added with so much angular panache that it enhances rather than detracts from the design.

The feet can be attached so that they raise the screen so a soundbar can be slotted underneath and build quality is excellent for an ‘entry level’ TV.

The Sony A8 OLED is accompanied by a good remote control. The metallic finish is crisp and feels good to hold, and the key buttons are given decent emphasis in the layout. Things get a touch crowded in the top third, though.

Adding Sony’s typically impressive X1 Ultimate processor to its cheapest 65-inch OLED TV is a big deal. At the very least it should put the 65A8 on a more equitable level with key rivals such as the LG OLED65CX and Panasonic 65HZ1000.

While the 65A8 gets one of the latest OLED panel designs, its X1 Ultimate processor remains essentially unchanged from last year. This may well not matter given how well the processor has previously performed. 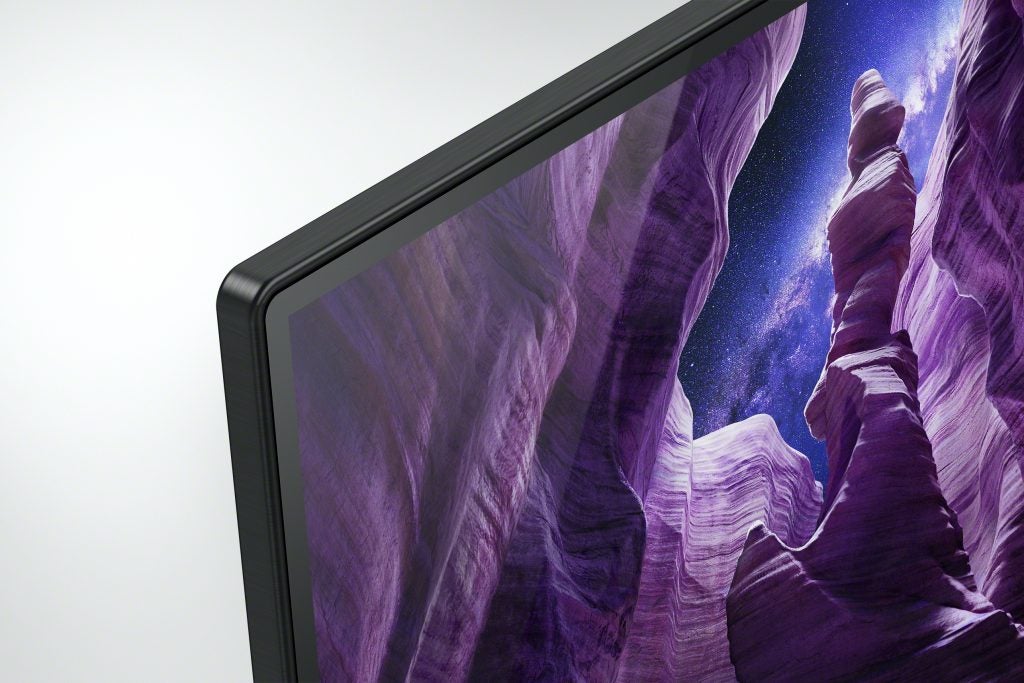 Sony has also created an OLED-friendly version of its X-Motion Clarity system that introduces partial black frames into the video stream to make motion with 24p sources look more cinematic without dulling the picture too much.

The 65A8’s big audio story is its Acoustic Surface system. This vibrates the TV’s screen to create sound, so there’s no need to fit in normal speakers and the sound is fired directly forward into your room. Sony has added a pair of rear mounted bass drivers for 2020, too. 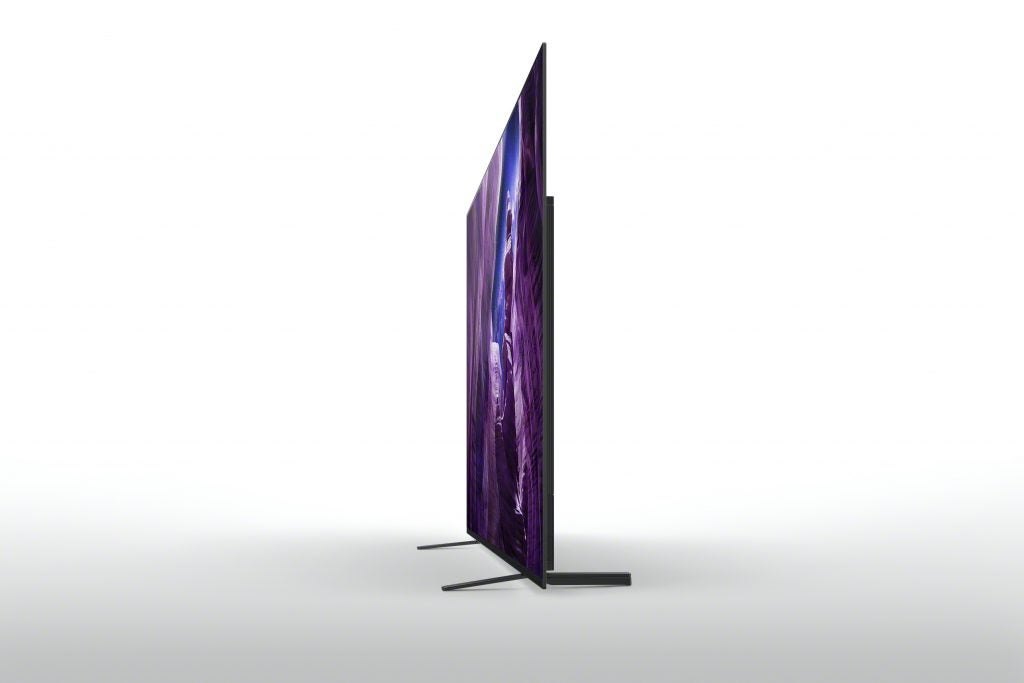 The Sony A8 OLED’s smarts are provided by Android TV in the latest 9.0 iteration. This provides access to a huge number of apps and services – though all most TV users will care about are the streaming apps.

The 65A8 caters for most of your needs in this respect: Prime Video, Netflix, Disney+, Rakuten, Apple TV and YouTube are present and correct, with 4K and HDR support. Sony adds YouView to the mix to compensate for Android’s missing UK catch-up TV apps. 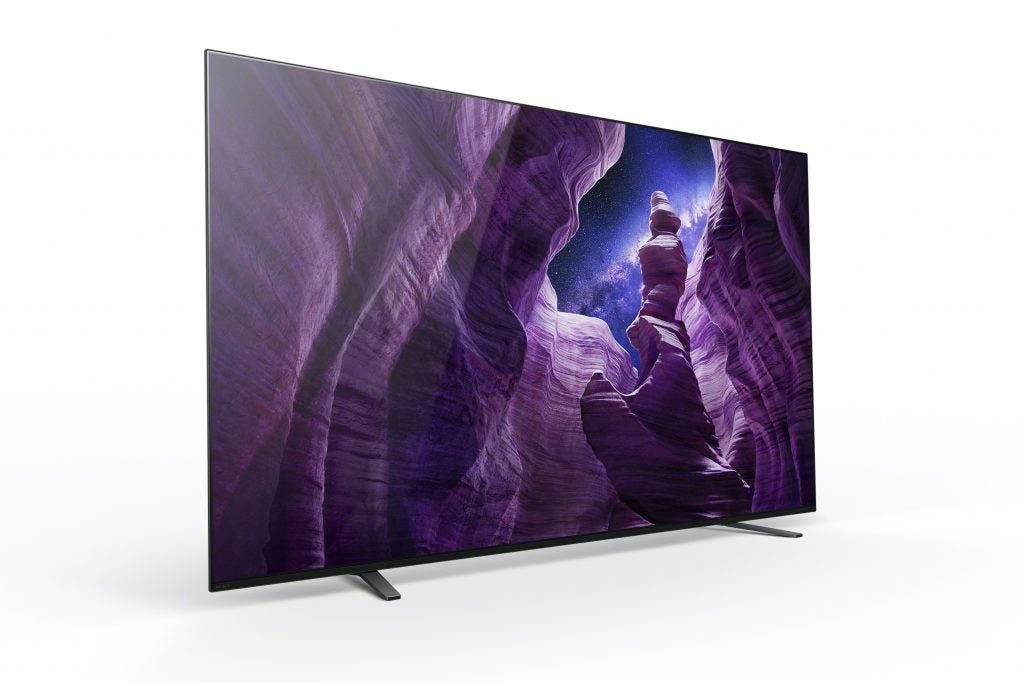 Connections include four HDMIs and three USBs. Given that Sony makes the PS5, it’s a pity none of the 65A8’s HDMIs support next-gen gaming features such as 4K/120Hz playback, automatic low latency mode switching (ALLM), and variable refresh rates (VRR). Though I was impressed to find input lag dropping to just 18ms in its Game preset.

The 65A8 also doesn’t support the HDR10+ format, or the new Filmmaker Node that many other brands are delivering for 2020. There is a Netflix Calibrated Mode that sets the TV’s picture options to match those used by Netflix when it masters its shows. The set has achieved IMAX Enhanced accreditation, too, meaning IMAX deems it capable of delivering the full picture quality experience from 4K Blu-rays and streams created using IMAX’s special mastering ‘sauce’.

I’ve been critical of previous Sony OLED TVs for not being bright enough. The Sony KD-65A8, though, solves this problem in spectacular fashion. Even though its measured brightness on a 10% of screen area white HDR window is still actually relatively low at 640 nits.

Given this still relatively low brightness measurement, the extra punch and dynamism you feel from the 65A8’s pictures is presumably down to the extra precision created through the combination of the X1 Ultimate processor, the latest OLED panel and Sony’s Pixel Contrast Booster technology. 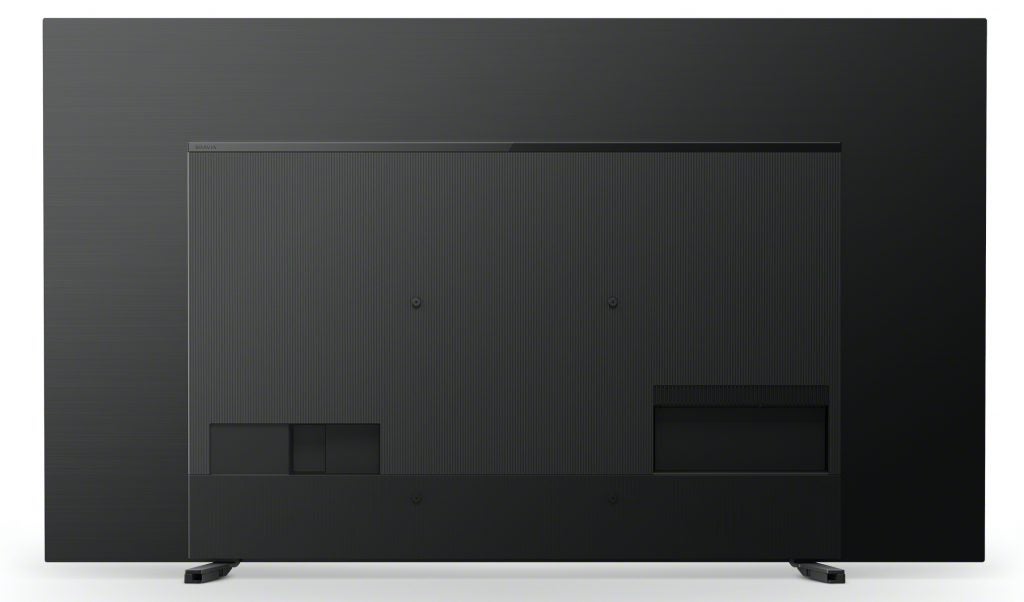 In other words, the incredibly precise and controlled way the screen delivers both the darkest and the brightest pixels in every image creates a sense of localised intensity that’s up there with the best of the OLED competition. In fact, because the intensity is founded on precision rather than just ‘aggression’, there’s a sense of actual beauty in the images at times that other brighter OLED’s don’t share – at least as consistently.

The Sony A8 OLED’s amazingly intense and rich black levels are delivered with much more consistency and stability than Sony has managed with an OLED TV before. Yet because the image processing is so good, shadow detailing and dark colour details never feel crushed.

It’s not just the gorgeous control of light that makes the Sony A8 OLED so lovely to watch. The light management combines with the Triluminos colour system and the X1 Ultimate’s Precision Colour Mapping to deliver gorgeously rich and clean, but also mesmerisingly subtle tones during even the most complex and dynamic shots. This in turn helps pictures look spectacularly detailed, dense and three-dimensional – especially as Sony’s Bit Mapping system is on hand to smooth away any potential distracting HDR colour banding. 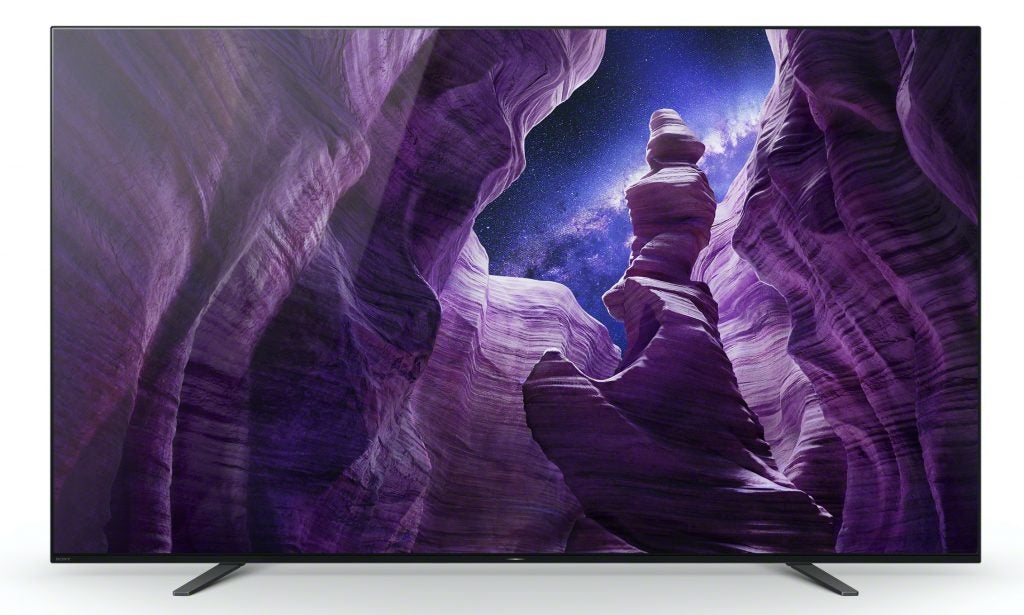 Since the 65A8 is an OLED TV, moreover, there’s no loss of colour or contrast even if you have to watch the screen from a wide angle.

The 65A8 continues Sony’s long winning streak when it comes to handling motion. Even without using any of Sony’s MotionFlow options, camera pans and fast-moving objects look less aggressively juddery than they typically do on rival TVs running in similar ‘native’ states. Sony’s Motion Flow 1 option takes the judder down a touch more without causing processing artefacts or excessive fluidity. The Clearness motion option – which uses the partial black frame insertion system – is also a great new option, delivering a more cinematic feel to movies without sacrificing much brightness.

The excellence continues with the 65A8’s upscaling of sub-4K sources and conversion of standard dynamic range sources to HDR. The upscaler adds detail and textures remarkably naturally and believably, helped partly by the intelligence with which it seems able to identify the different upscaling needs of different parts of/objects in any given image. And partly by Sony’s understanding of the way adding natural-looking pixel density can be more effective than just massively sharpening everything.

The SDR-to-HDR converter actually kicks in by default and obstinately on some of the 65A8’s picture presets including the Standard and Cinema modes. Normally this would be a bad thing, but Sony’s HDR upconverter works so gently and organically that it’s hard to think of any reason not to use it. Unless you’re a die-hard purist, in which case you’ll need to use the Custom presets. 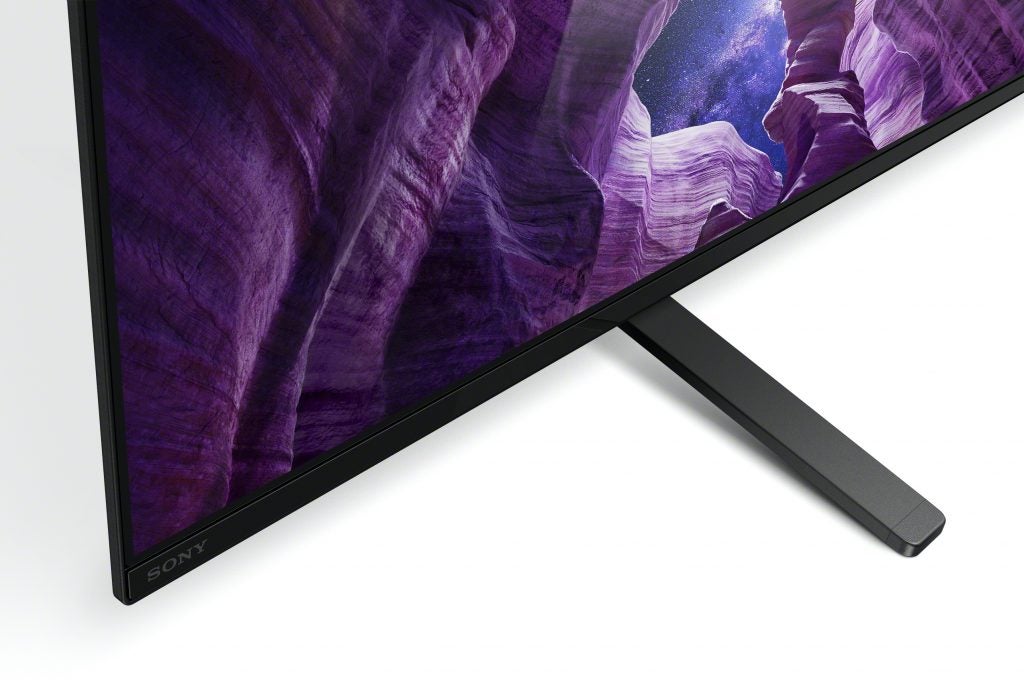 I only really found two flaws with the 65A8’s pictures. First, while they look punchy enough in a fairly dark room, bright HDR scenes can look a touch flat in a very bright environment. Second, since the 65A8’s exceptional local contrast works particularly well with Dolby Vision content, it would have been nice to see if it could also eke out more punch from HDR10+ sources.

The 65A8’s stellar pictures are joined by a similarly accomplished sound system. The Acoustic Surface technology pushes sound forward into your room, giving it a much more direct, immediate feel. Also, since the sound isn’t coming from a relatively small ‘point’ as happens with normal TV speakers, it creates a wide-ranging, well-dispersed stage that really fills your room. Finally, voices and specific effects really seem to be coming from the place in the picture they’re supposed to be coming from.

Bass is a touch light, perhaps. Though it’s significantly better than that of previous entry-level Sony OLED screens.

Its pictures are things of beauty: refined, balanced, natural, intense, precise, pretty much noise-free and the beneficiaries of some of the finest colour, upscaling and motion processing around.

The 65A8 also benefits from a beautifully elegant and minimalist design.

The set sounds great, with the Acoustic Surface audio pushing sounds into a room.

Android TV brings a swarm of smart features, but some may find other interfaces more intuitive

The Sony doesn’t count on HDR10+, though that’s a minor niggle considering how widespread Dolby Vision is on streaming services.