Which is the best cheap Windows Phone 8.1 mobile?

Nokia’s Lumia-series naming can get a bit confusing. The Lumia 620 is older than the Lumia 520, and many people would tell you that the Nokia Lumia 1020 is a whole lot better than the Lumia 1320. It’s not just a case of higher numbers being better.

However, the Nokia Lumia 635 is a bit better than the Lumia 630 in at least one way. If you’re wondering how these two entry-level 2014 Lumias differ, read on.

Video: A closer look at the Lumia 630

The most important difference between these two phones is that while the Nokia Lumia 635 is a 4G phone, the Lumia 630 is somewhat stuck in the past, with mobile internet that tops out at 3G speeds.

How much faster is the Lumia 635? It uses Cat3 4G mobile internet, which maxes out at 50Mbps upload and 100Mbps download. For those not too au fait with megabits and megabytes, this means theoretical maximums of 12.5 megabytes download per second, and 6.25MB upload.

This is around 10 times the speed most people can expect from a ‘normal’ home broadband connection. It’s fast, even though several phones already have Cat4 4G, which stretches to 150Mbps download – that’s 50 per cent faster.

The Lumia 620 has HSPA mobile internet, the breed of 3G you’ll find in just about any decent smartphone of the last five years. Its maximum download and upload speeds are 21Mbps download and 5.76Mbps upload. That equates to 2.6MB download a second – again this is a theoretical maximum.

Taken in a real-world context, while neither of these phones will get you mobile internet speeds close to what their connection types are capable of, you can expect the Lumia 635 to download files about ten times faster than the Lumia 630. In our experience with using 3G and 4G in London, you can generally get 10-25Mbit speeds over 4G, we’ve learned to make do with about 1-2Mbps on 3G. 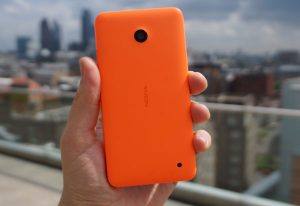 Some people may tell you 4G is pointless, but it certainly isn’t if you like streaming video or downloading apps/photos on the go.

Do make sure your contract has a 4G option before buying the Lumia 635, though. In order to get 4G mobile internet you’ll need to have a 4G SIM and be connected up to a 4G deal. Several carriers offer free upgrades to  4G if you’re already half-way thru a 3G contract, and there are already some pretty good 4G SIM-only deals out there if you’re willing to shop around.

Our usual preference is for matt phones when they are made of plastic, as it helps to avoid some of the sticky, tacky feeling that makes plastic phones feel a bit cheap at times.

However, Nokia has put a little more effort than some into its glossy finish for the Lumia 635. There’s a slightly appearance of depth, which arguably helps it look perhaps even a little pricier than the matt Lumia 630.

The Lumia 635 also comes in an additional colour. You can get black, white, orange and green versions of each phone, but Nokia also advertises a bright yellow version of the Lumia 635 that seems to be missing from the Lumia 630 line-up.

It’s not just about look, though. The cheaper Lumia 630 has a slight texture, giving it a bit of grip while the Lumia 635 is very smooth. Which is better is somewhat a case of personal preference – and both should be available for you to get a close-up look on the high street before too long. 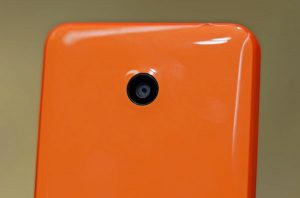 The glossy finish of the Lumia 635 in person

What is the same?

Aside from design and mobile internet connectivity, the Lumia 630 and Lumia 635 are pretty much identical. They both have Snapdragon 400 CPUs, 4.5-inch 480 x 854 pixel screens, 8GB of storage and Windows Phone 8.1.

In our review of the Lumia 630, we found that one of the most disappointing aspects of these phones is the screen. The resolution is pretty low and the pretty poor-quality backlight means the display doesn’t look evenly lit up.

If you’re not specifically out for a Windows phone, we’d also suggest considering the Motorola Moto E if you want a cheap phones, and either the EE Kestrel or Motorola Moto G if you’re willing to spend that little bit more.

The Nokia Lumia 635 is a slightly more future-proof phone than the Lumia 630. Having 4G isn’t going to radically change the phone experience for everyone, but in 12 months or so your phone’s web speed is going to look seriously slow. Aside from this, though, they’re largely the same phone.