This latest update adds a treasure trove of features and tweaks. Some are designed to please the everyday user, but plenty more are out to gain some of the geek approval Windows still lacks, compared to Android.

In this review we’ll be looking at all the major new Windows 8.1 features, and whether they are any good.

Note: This review is based on the developer preview. To get the software yourself, read our guide on how to download Windows Phone 8.1 in the UK.

A quick glance at a Windows Phone 8.1 screenshot will tell you that Microsoft has not fundamentally changed how Windows looks on a phone. The system is still split into a scrolling page of Live Tiles that make up your home screen, and a separate apps menu where you can keep anything you don’t use too often.

Here’s the difference in action:

To an extent this undermines the scroll-happy style of Windows Phone. But it’s a real improvement for those used to Windows on a phone. Less scrolling is a bonus, and there’s no usability issue once you’re used to your home screen layout.

It does emphasise the relatively low sharpness of PenTile screens like the Lumia 925 we used for this review, though, and may be a bit of a stretch on small-screen phones.

The next obvious interface change in Windows Phone 8.1 is that you can now put an image behind your home screen. It shows through certain Live Tiles, and developers can choose whether to make their icons opaque or transparent.

It’s a neat visual idea, and maintains the slick Windows Phone look because it uses a parallax effect – this background scrolls a little less quickly than the Live Tile page itself, giving an impression of depth.

However, in practice it needs to be used far too carefully. With anything but a dark, fairly plain background it spoils the legibility of any Live Tile text. It also ruins the high-contrast visual punctuation that is the system’s calling card.

Here are the old style and new style home screens for comparison: 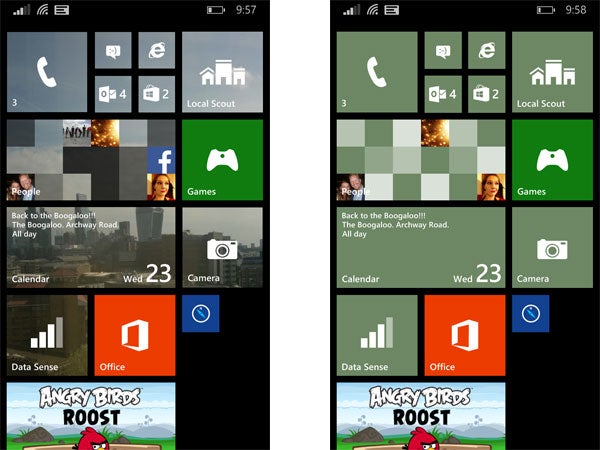 This background doesn’t fare too badly, but anything with plain white in it is a no-go

Freedom is good, but we imagine many people will make their phone harder to use, and worse-looking, by taking advantage of this feature.

Despite this niggle, Windows Phone 8.1’s interface is improved by the additional Live Tile scope. And Microsoft hasn’t dropped the ball with performance.

While apps still often seem to take a bit longer to load here than with an iPhone or Android device, Windows Phone 8.1 is as whizzy as ever.  Some new features make the phone quicker to use too.

Action Center (whose name will hopefully be de-americanised by the time it reaches the UK) is a drop-down notifications bar whose style has been robbed wholesale from Android. It’s accessible wherever you are in the phone and it shows you notifications, and gives you access to a few feature toggles.

You can even access Action Center from the lock screen. And in the Settings menu you can choose the feature toggles that go into the drop-down, and the apps that get access to Action Center.

It’s handy, it’s quick, and it is something many people have been wanting to see in Windows Phone for an age. 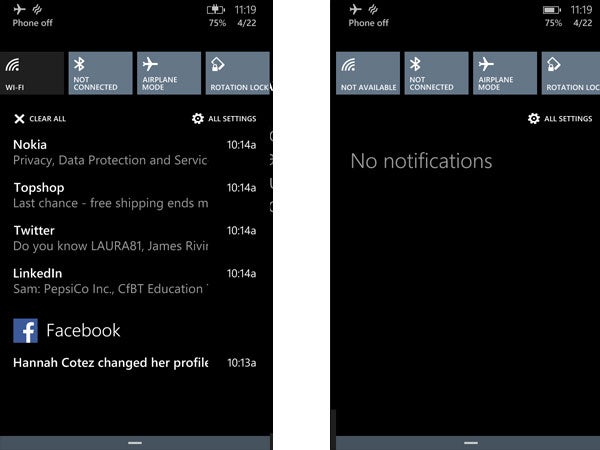 However, it does feel like a first-stab effort that will be tweaked significantly in Windows Phone 9, or version 8.2 if that comes to pass. Its look is much less directed than most other parts of Windows Phone – right down to the justification of text and the placement of icons in the features toggles. You could almost mistake it for a third-party addition to the system, something that Microsoft does not allow.

These core interfaces changes are the most obvious Windows Phone 8.1 alterations, but Cortana is probably the most politically important.

Cortana is a digital assistant in the vein of Apple’s Siri or Google’s Google Now. And like those assistants, Microsoft makes sure it is easy to access. You just press the search button, as Cortana now presides over the Windows Phone universal search. She’s a pervasive lass.

Cortana is used not just to give Windows Phone more features, but also more personality. A consequence of a slick but rigid look is that Windows Phone has one of the most severe ‘design personalities’ in the mobile phone world. A humanised feature like Cortana makes it seem that little bit more friendly. In theory. 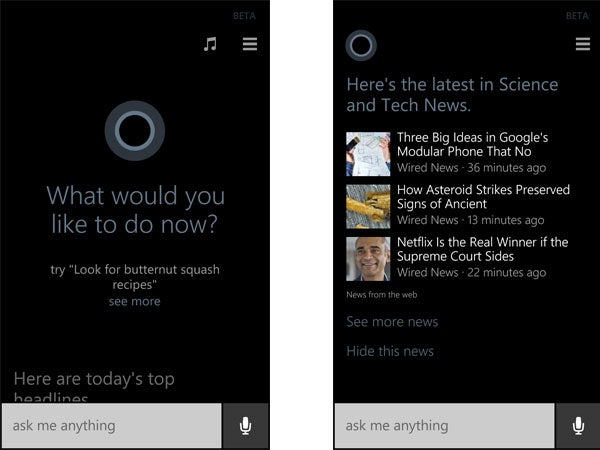 But is it any good? It’s a mostly successful work-in-progress. The voice recognition is solid, especially given it’s optimised for US accents at present, and you can interact with other parts to the phone to send messages, setup calendar events and so on.

Cortana also brings elements of the Google Now style, in that it offers up digestible chunks of information based on your preferences, whether learned or programmed-in by you. You can tell Cortana about your hobbies, where you live, work and so on.

Flick upwards from the main Cortana screen and you’ll see the latest headlines, and then the local weather another screen down. You can customise what goes here a bit, but you’re limited to certain Bing-fuelled topics and can’t presently use a custom RSS or subscribe to certain sites. 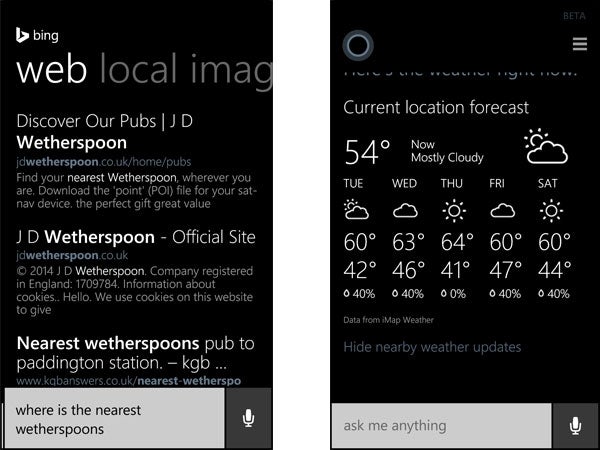 It’s a little less clean than the Google Now look, though. Much like Action Center, the visual execution of Cortana could do with a tweak in parts.

We also found that Cortana booted us out to a Bing search more often than not, even when dealing with questions that are really within its remit, such as travel advice. As-is, it feels a little less developed than either Siri or Google Now.

We’re hoping to see this improve by the time the full release comes to the UK later this year, because otherwise it won’t be all that much more useful than Ask Jeeves. However, we can imagine using it more than – for example – Siri. While it’s a voice assistant, there’s no particular need to talk to the thing. It’s just as happy with typing. 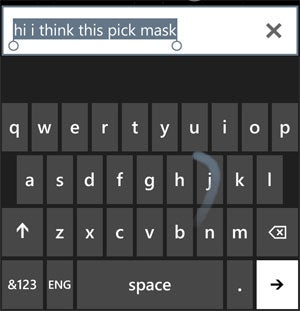 From the showy to the low-key, we come to one of our favourite new bits of Windows Phone 8.1. The keyboard now supports gesture typing as well as normal tapping. Microsoft calls it Word Flow.

For the uninitiated, you draw a snaking line over the letters in a word (in the right order, naturally) and the phone works out what you were trying to type by cross-checking the places your thumb/finger  slowed down or stopped with the internal dictionary. It works well, and will seriously speed-up typing for most people.

Without wanting to bang on about how parts of Windows Phone 8.1 don’t look all that great, the visuals of gesture typing could be better, though.

There are some other notable new bits in Windows Phone 8.1, but they are more periphery features.

Quiet Hours is something you’ll find on some Android phones. It lets you silence your phone during certain hours of the day, or when you have a calendar event going on.

As an antidote to this, Windows Phone 8.1 also offers an Inner Circle within your contacts. These people can get through at all times.

For some reason, Microsoft has bunged these bits into Cortana (in its Settings menu), although you can also specify Quiet Hours in the phone’s standard Settings menu too. It’s handy, but nothing we haven’t seen before.

Next up, the new Podcasts app is one way for Microsoft to mitigate the still-pretty-rubbish apps selection of Windows Phone. It’s a podcast client that lets you automatically download new episodes of your favourite podcasts, or just collate them for streaming.

It’s a neat extra if you’re into internet radio, but very much a side attraction rather than a core part of Windows Phone 8.1. 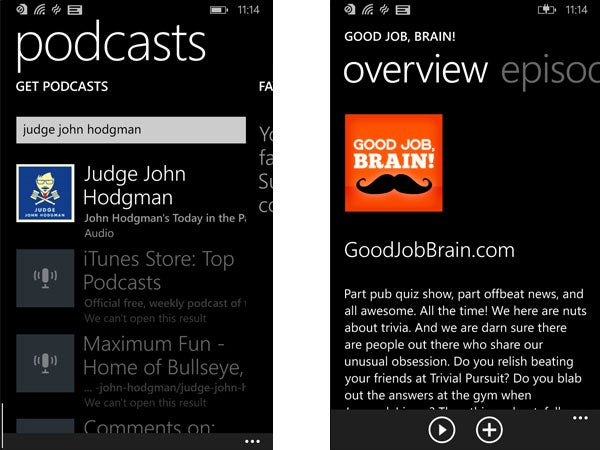 Should I upgrade to Windows Phone 8.1?

Naturally, there are other parts of the system that have been optimised. But the elements we’ve covered are the bits you should be excited about, if anything.

Should you be excited? Despite having some pretty serious changes, this does feel  like a bit of a stop-gap between Windows Phone 8 and a more complete system refresh in – hold your breath – Windows Phone 9, or whatever Microsoft chooses to call it.

The immaculate visuals of Windows Phone 8 have been compromised a bit as not every new feature has been applied with the utmost attention to aesthetic detail. But the new bits are absolutely worth experiencing regardless.

Windows Phone 8.1 offers some significant changes that help the system gain parity with its major rivals iOS 7 and Android 4.4 KitKat. Some parts have a little less spit ‘n’ polish than we’re used to with Windows Phone, but they help to make the system feel more immediate and cohesive than before, if only structurally.

Thanks to Three for the Lumia 925 loan