Wondering what an OLED display is? You’ve come to the right place – we’ve got all the details on why OLED screens are better than the alternatives.

OLED and AMOLED displays have taken over the phone market in 2021, appearing on flagships from the likes of Apple, Samsung, Google, Huawei and more.

Below we’ll explain what an OLED display is, what makes it better than the alternatives, and share a list of some of the best phones you can buy that use OLED tech.

What is an OLED display?

But OLED is different because of the organic part. In an organic diode, there’s a thin film of organic compound that emits light when you pass an electric current through it.

So manufacturers take this organic semiconducting material and place it between two electrodes, which provide the current. Usually one of these electrodes is transparent, so the light that is being generated can escape – and be viewed by you.

These organic diodes – OLEDs, as it were – are used in bulk to create digital displays on a wide range of products, right the way from small wearable and smartphones, all the way up to huge, hulking television sets.

What makes OLED so good?

Many smartphones and televisions use a type of display called LCD, which stands for liquid-crystal display. These liquid crystals don’t emit light directly; instead, you shine a backlight through them to create light. These crystals make up the pixels on your screen, and illuminate courtesy of a huge backlight at the back (or at the edges) of your phone or television.

But the key advantage of OLED is that the organic diodes emit their own light. This means they don’t need a backlight at all – just an electric current.

The first perk this brings is the fact that you don’t need to power a backlight. That’s great, because backlights are very power-hungry, thanks to the fact that they need to always be on to illuminate the display.

By contrast, an OLED can light up individual pixels when necessary, and to different degrees. That’s why battery life can be significantly improved on smartphones that use OLED screens. 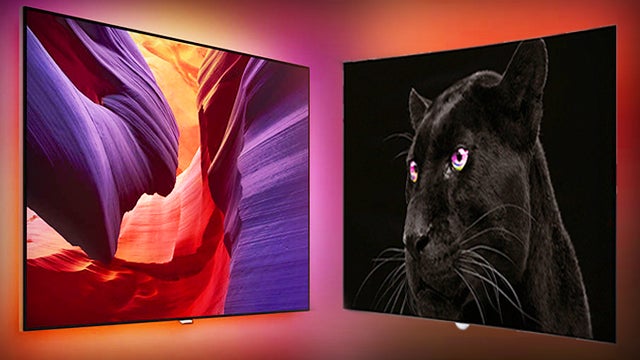 OLED vs LED LCD: the best display tech for you

With LCD screens, it’s not actually possible to show true black. That’s because there’s a backlight on at all times, which means there’s always some sort of light. And because some displays can’t control lighting in certain areas of a screen, it’s hard to have absolute control over the display’s brightness.

With OLED screens, the advantage is clear. If an OLED screen needs to display black in an area, your phone can simply turn specific pixels off. This means you’ll have zero light being emitted, which is about as black as it gets.

So why the hell is anyone still using LCD displays, you’re probably thinking. Price, basically.

To produce OLED panels was, historically, much more expensive than making LCD screens. The yield was low, and few people could manufacture them effectively.

The good news is that the gap has closed significantly, and OLED screens for both televisions and smartphones are quickly dropping in price.

Which phones have OLED displays?

When we first published this guide, OLED phone displays were few and far between. However, these days there’s a lot more choice on the market.

Samsung had the crown for a period of time. Analysts at UBI Research expected that the company would hold approximately 89% of the AMOLED (active matrix OLED) display panel market in 2017. Samsung’s dominance of phone-sized OLED panels also meant that the Korean firm was able to offer AMOLED screens on its smartphones for years ahead of companies like Apple who had previously stuck with less impressive display alternatives.

Luckily, things have changed over the years and now there are plenty of options if you want an OLED screen.

Here are a few recent phones that feature them:

In fact, all of the phones in our best smartphones guide feature OLED displays in 2021.