Everything you need to know about the Moto 360 2

The Moto 360 2 is being tipped as the big Android Wear-based answer to the Apple Watch and, according to latest reports, the second-gen wearable could be officially unveiled in a matter of hours.

With the Huawei Watch challenger expected to make its first formal appearance at Google I/O 2015 later today, the Moto 360 2 release date has been tipped for the height of summer.

A direct follow-on to the 2014-released Moto 360, the next-gen timepiece has been mooted to adopt a similar form to its predecessor, with a second, smaller model rumoured to join the traditional 1.56-inch offering.

With additional colours schemes and strap options also set to be made available, the upcoming Samsung Gear S challenger will retain its Android Wear foundations.

There could be a big change in store, however. That flat-type base which plighted the original’s screen is reportedly on the way out, with the round-faced watch tipped to adopt a fully circular face – a la the LG G Watch R.

We will continue to update this post with all the latest on the Moto 360 2, bookmark it now to be kept up to date with all things wearable. 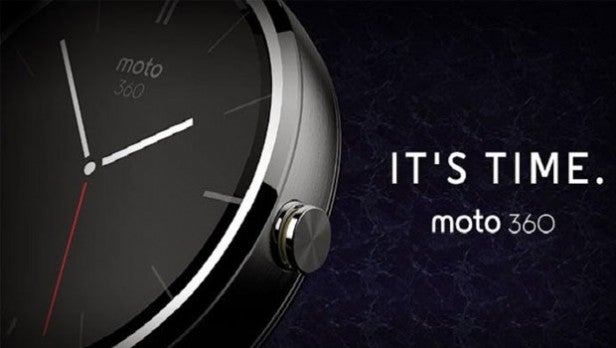 An exact Moto 360 2 release date has yet to be confirmed, but insider reports and recent leaks have suggested the device could be closer than you might think.

Like its predecessor, it has been suggested that the Moto 360 2 will take its first official bow during Google’s annual developer conference, I/O. This year, the tech world will turn its attentions to what’s next from the Mountain View-based company on May 28 and 29. That’s today and tomorrow.

Given the device’s high-profile status, it is expected that the watch will be formally unveiled during the gathering’s keynote conference, likely alongside a major Android Wear update. This kicks off at 5:30pm BST (9:30am PST) tonight. You can follow al the action through TrustedReviews.

When the wearable will go on to hit retailers’ shelves, however, is still unclear.

Last year, despite having been formally unveiled in May, the Moto 360 didn’t actually go on sale in the UK until October. We can’t see such a lengthy wait put on consumers this time round, however.

Given the current growth in Apple Watch interest, we would expect to see the Moto 360 2 on sale before the end of July. This is purely speculative at this stage though.

Motorola’s parent company, Lenovo, has even offered some hints as to when the watch might drop.

Late last year, Lenovo executive Gleb Mishin, suggested the as yet unconfirmed device would go on sale in “early 2015” with a “modified design”.

Despite adding that the device would be “more beautiful and more like a clock,” Mishin failed to further narrow down the Samsung Gear S challenger’s official date of release.

Further hinting that the Moto 360 2 could be with us sooner rather than later, Motorola has slashed the price of its debut smartwatch in recent weeks. 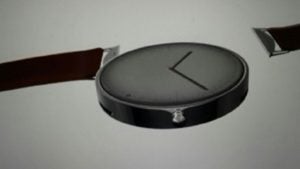 Prior to launch last year, the Moto 360 sparked much excitement. This was the smartwatch that was set to bring high-end design appeal to the techy wrist wear market. Promo materials looked impeccable; the reality was very different, however.

Despite featuring a metallic body and leather strap, the 360 felt cheap, fat and sub-par. What’s more, its round display was scarred by the flat-tyre base which housed the unit’s light sensor.

Fortunately, it appears that Motorola has learnt from its mistakes and will bestow the 360 with a far more ‘premium’ look and feel.

Images (above) posted to Chinese social platform Weibo recently claimed to depict the second-gen Moto 360 in all its slimmed down, fully round display-hosting glory.

The wearable, which is doing the rounds in camp Moto under the codename ‘Smelt’, was shown to feature reduced bezels and a crown. It is not clear whether or not the watch’s crown will be handed smart capabilities – like the rival Apple Watch.

Motorola failed to comment on the leaks, leading to much speculation surrounding their validity. 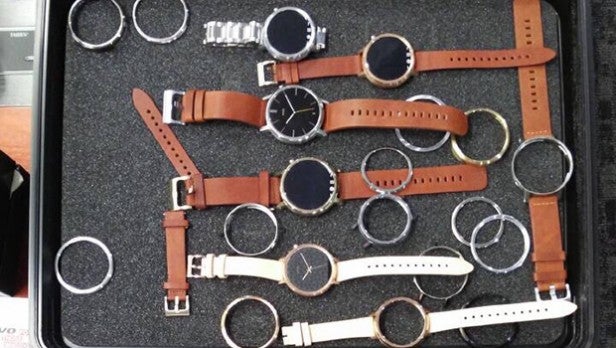 Despite having failed to officially confirm the wearable’s existence, the loose-lipped, careless folks over at Motorola have already offered up a number of tantalising looks at the next-gen wearable.

Following the company’s recent takeover, Lenovo CEO Yang Yuanqing posted an image of a suitcase full of future product samples. It is believed the devices in question were all Moto 360 2 prototypes.

How do we know they’re not the original models in a variety of new guises? Well, the teased units all feature lugs on the chassis from which to attach straps. The original model featured a different, more complicated, body-based strap fastening system.

As well as offering new design pointers, this comprehensive tease has suggested that – in true Apple Watch echoing fashion – the Moto 360 2 will be offered up in a variety of new colours. 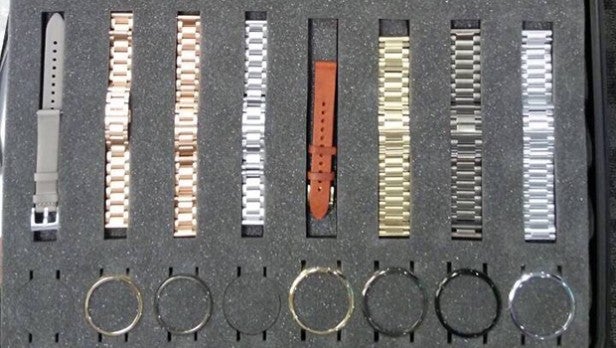 The mass of metal bodies have been shown to include silver, black, gunmetal grey and gold options. These are paired with a mass of leather, rubber and metal straps.

Perhaps more interestingly, however, it also appears that there will be two screen sizes and a variety of strap thicknesses for the Moto 360 2 to choose from – presumably to better appease the more slight of wrist amongst you.

Sadly, contradicting a flurry of rumours surrounding the device, Yuanqing’s leaked snaps suggest that the 360’s screen cut-off looks set to remain. This would be sure to deter many an Apple Watch defector. 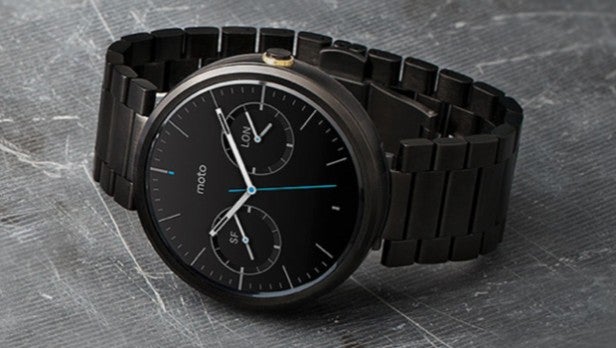 Pictures have leaked and chatter has been rife, but finalised Moto 360 specs are still very much few and far between.

Although it is expected that the standard model will retain its predecessor’s 1.56-inch round form, it is currently unclear exactly how small the reduced-sized offering will line up.

One thing that has been suggested, however, is that the device’s screen is set for a resolution boost. The original 360 touted a 320 x 290 pixel panel. Given the mooted lack of a flat-tyre base, this will reportedly be expanded to a 320 x 320 resolution.

It is not yet known how much the second Moto smartwatch will differ from the original beneath the surface, although battery life is sure to be an area the manufacturer will look to address.

However the device turns out, don’t expect Motorola to go light on the Apple Watch bashing. The company has not been shy in criticising past wearable rivals, previously branding all other devices ‘crappy’.

“We look at the 360 and we look at what everyone has done in that space. To be honest, we think they are all pretty crappy,” Mark Randal, Motorola’s Senior Vice President of Supply Chain and Operations told us last year. 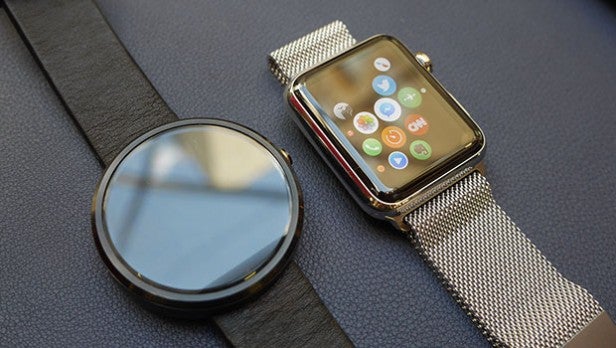 The Apple Watch has given license for manufacturers to add a further premium to their wearable offerings, but don’t expect the second-gen Moto timepiece to break the bank.

The original Moto 360 set wannabe owners back £199 – a full £100 cheaper than the entry-level Apple Watch Sport. This, however, was still considered expensive at the time and, given the slow uptake of smartwatches, we would be surprised if the Moto 360 2 price went much past the £200 marker.

Although finalised details are still far from official, it is believed that the smaller screened offering will line up considerably cheaper than the full-size watch.

This page will continue to be updated with all the latest Moto 360 2 news and rumours as additional details emerge.