At its September 7 event Apple unveiled a new Apple Watch Series 2. This packed in a new GPS sensor as well as waterproofing to 50m and a new dual-core Apple S2 SiP chip to power everything. The new Series 2 will be available for £369.

Our original Apple Watch review, including a long-term update, continue below.

I’ve been wearing Apple’s first wearable since it hit shelves last spring and in most ways my opinion almost entirely mirrors our initial review. Once you’ve looked past the typically stylish Apple design, the Watch is an overly complicated piece of tech that still doesn’t really know what it wants to be.

In fact, the best move I’ve made so far is to completely turn off all notifications. The constant wrist vibrations became a nuisance, not aid, on too many occasions. Silencing them is the only reason I’ve been able to keep the Watch on this long. Maybe smartwatches aren’t meant to be hubs for all our communications after all.

Even though watchOS 2 was meant to sort out the ridiculously slow app situation with native downloads, it’s still far from perfect. Apps still take an age to get going and they’re still mostly pointless. Aside from the handy music controls and fairly impressive Citymapper there isn’t much else that has made me think, ‘Wow, this really works on a watch.’

WatchOS 2 did bring with it a few neat upgrades. The Nightclock feature is nice to have, though I wish I could keep it on all the time, like I can on the Moto 360 2. And don’t even try using it with the Milanese Loop strap, you need a tough one like the Sport Band to keep it upright.

Time Travel, which lets you skip through the day by twiddling the Digital Crown, is great too. If you’re using some of new third-party complications it’ll show you when rain might be coming (through Dark Sky) and upcoming appointments.

So the thought of the Apple Watch Series 2 does still make me somewhat excited. But, it’s really the software that needs the biggest update and there are some big improvements expected from watchOS 3. It needs to be simpler, with less to do and a generally cleaner way of doing everything.

You can check out our full Apple Watch review below.

What is the Apple Watch?

Apple may not be the first technology company to release a smartwatch, however, it is debatably the first to generate any significant interest about a wearable.

In fact, recent stats from Strategy Analytics suggest the Apple Watch already accounts for 75.5% of the smartwatch market.

This is despite the fact Google made its opening move to conquer the smartwatch market over a year ago, when it released its wearable focused Android Wear operating system.

However, while it may be enjoying early success there are quite a few niggling flaws in the Apple Watch that potential buyers should be aware of. These include common issues, such as poor battery life, as well as more local problems, like weird software glitches and unintuitive app interfaces.

Watch our Apple Watch vs iPhone race across London

The Apple Watch is the most attractive smartwatch by a country mile. It uses the most luxurious materials and it’s more discreet and elegant than the majority of its rivals. That’s the least we expected from Apple and from something that costs more than the alternatives, though.

The casing, which is made from stainless steel, has a lovely polished sheen, while ceramic glass protects the heart rate sensor on the back. The Watch is beautifully constructed, though the Watch complements a smart shirt better than something more casual. Much of this comes down to the version and strap you choose, though, which we’ll get into in a minute.

First, an important question – it’s a beautiful smartwatch, but is it a beautiful watch in the traditional sense? Not really. A normal £600 watch doesn’t have to live with the compromises that most smartwatches, including the Watch, have to deal with and that shows. Pick up a similarly priced Nixon, a Seiko or Hamilton watch and you’ll instantly see what we’re talking about. 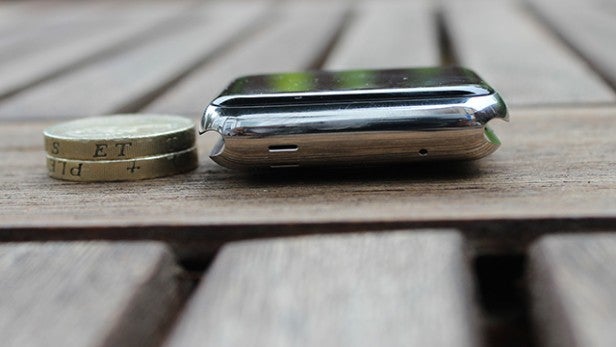 Apple does live with those compromises better than most, though, specifically that issue of thickness. The Apple Watch isn’t thin. It’s about as thick as three British one pound coins (11.5mm thick to be precise), but you don’t notice the added bulk as much as some. The way the stainless steel case and screen curve inwards help create the illusion of a slimmer, more elegant timepiece compared to the Moto 360, which many feel is the most desirable Android Wear watch to date. It also helps that the Digital Crown and Friends button on the right don’t jut out too far, while you’ll barely notice the speaker and mic on the left that let you make and take calls.

That thick body fits in an array of components, including 8GB of flash memory, the NFC radios ready for Apple Pay (US-only for now), sensors for tracking motion and Apple’s custom S1 processor. That’s accompanied by 512MB RAM and the whole chipset setup is supposedly more powerful than the first generation iPad.

So far, so good, but it’s a little disappointing that the Apple Watch isn’t really waterproof. You’ll have to take it off before you get in the shower and don’t even think about going anywhere near a swimming pool. Apple says it meets the IPX7 water resistant certification, which means it’s suitable for running in the rain and doing the dishes with it on. 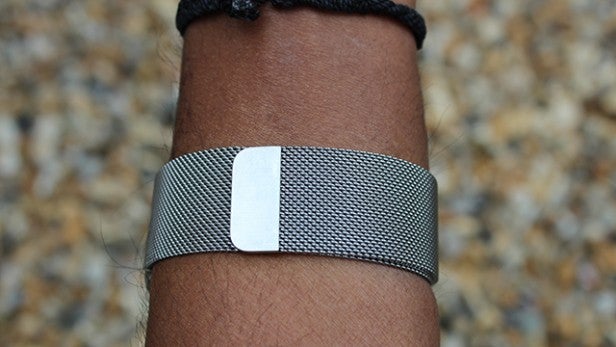 There’s no shortage of strap options. Apple is offering a variety of leather, metal and more sport-friendly rugged straps with different types of buckles. It’s easy to remove and change them by locating and holding down the buttons on the back of the case to slide out the watch strap.

We had the Milanese loop strap, which is the most jewellery-like in appearance. It complements the stainless steel body nicely, but it’s a little more feminine than the leather options. Unclip it and wear it around your wrist and you’ll see what we mean. Its magnetic clasp makes it easy to secure and means there’s no need to remove links to find that perfect fit. It’s not free from issues, though. The clasp has already picked up a fair few scratches, so it’s clearly not the most durable strap in the range.

It is very comfortable, though, as is the Watch as a whole – it feels fine even when worn all day and night. It’s technically a little heavier than other smartwatches, but you’ll barely notice the extra weight. Thankfully, it’s elegant stature means it doesn’t stick out like a sore thumb and we’ve had no skin irritation issues during our time using it. 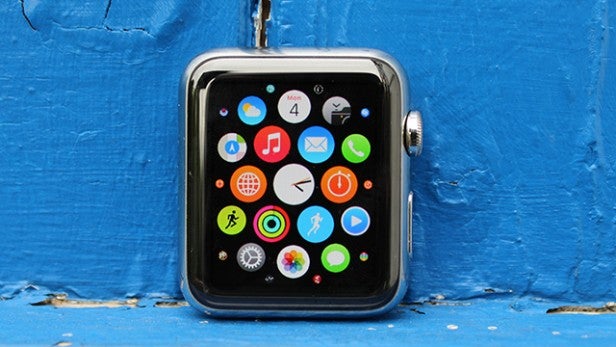 If there’s something smartwatch manufacturers are not struggling with, it’s how to make great small screens. LG and Samsung lead the way, but that’s no surprise when they’ve been excelling doing the same for phones and TVs for some time now.

The Watch we tested with the 42mm strap packs a 1.7-inch rectangular screen, which is bigger than the one used on the Watch with the smaller 38mm strap (1.5-inch). Apple is calling it a Retina Display, but unlike an iPhone, it’s swapped LCD technology for an LG-built flexible OLED one.

On top lies a sapphire crystal coating, something you’d find on a similarly priced Nixon watch for instance. This is included to protect against scratches. It’s also meant to increase reflectivity, but that’s not something you’ll find an issue with on the Watch. The cheap Watch Sport has to settle for toughened glass.

From a design perspective, the Watch screen is a beauty. There’s no obvious thick, ugly screen bezel, so all of that screen estate is dedicated to accommodating the operating system. Apple has hidden away the ambient light sensor – responsible for automatically dimming brightness – behind the screen, which is rather clever. 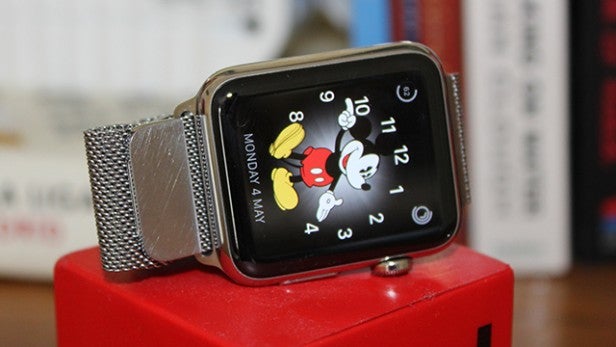 The rectangular versus circular screen debate continues to divide and we’d still side with the more traditional approach. But the Apple Watch is the most convincing argument for a ‘smartphone inspired’ screen on a phone.

The 1.7-inch screen has 322 pixels per inch and it’s right up there with the Samsung Gear Live for sharpness, colour accuracy and brightness. Whites have a slight blueish tint, but it’s virtually impossible to notice on such a small screen. Visibility is fantastic, as well. Day or night, you won’t have to squint to read it and it copes well in bright sunlight.

Another aspect of the screen is Force Touch – it’s one of the most interesting features on the Watch. It essentially forms part of the screen technology and makes it possible to detect the difference between light and hard presses on the screen. There’s nothing really like it on other smartwatches and while it takes some playing around to work out the apps compatible with it, it’s a clever way to add extra functionality to apps without having to over complicate the user interface or add more physical buttons.

We’d say Samsung’s smartwatch screens remain the pinnacle, but Apple’s not too far behind for overall quality.

Next
Software & Using the Watch Review