What is the Samsung Gear S?

The Samsung Gear S is bigger, more feature-packed and less reliant on your smartphone than any other smartwatch we’ve wrapped around our wrist this year. Unlike Android Wear watches such as the Moto 360 or the LG G Watch R, the Gear S acts more like a smartphone, letting you make calls, browse the web and even listen to music without being connected to a handset.

Having the luxury of leaving your Samsung Galaxy phone behind comes at a price, though – a price that makes the Gear S the most expensive smartwatch currently available. Disappointingly, despite loading the Gear S with some desirable features, Samsung isn’t that much closer to giving smartwatches appeal. 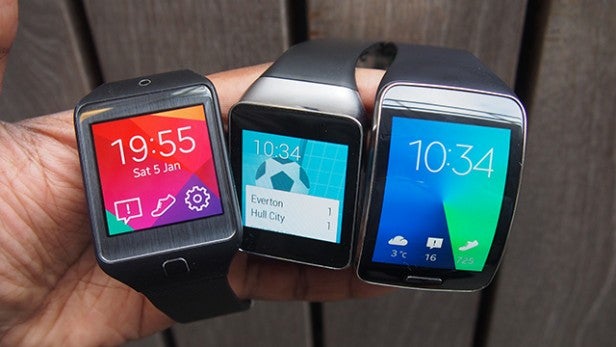 If you’re hoping the Gear S exudes the type of elegance to complement a fine tailored suit, you’ll be disappointed. This is as big and bold as smartwatches get.

This isn’t, by any stretch of the imagination, a design inspired by traditional analogue watches. The wrap-around body gives it more the feel of a futuristic bracelet from an ’80s sci-fi flick.

It’s different, we’ll give Samsung that, and people will certainly notice it. Unlike the Moto 360, the Samsung’s huge frame isn’t de-emphasised, instead embracing its size with that strap only gently thinning out from the widest part at the case. If you want something showy, then this is it.

If you’ve tried on the Gear Fit, the Gear S looks like what would happen if you glued two Gear Fits together. It’s more sleek than that sounds, but on slimmer wrists, the hulking case is more noticeable. If you can live with the size, it’s actually light and comfortable to wear on a daily basis. 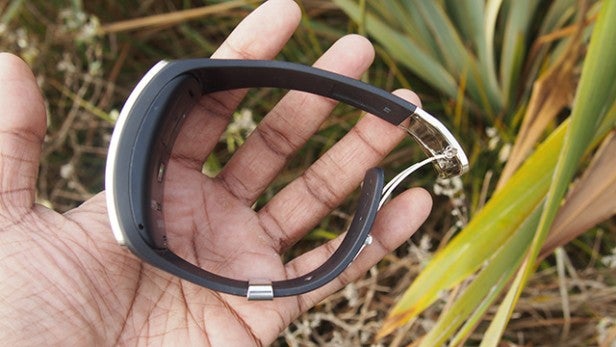 Available in black and white, it adopts the same predominantly black plastic body as the Gear Fit, with the same attractive chrome trim and curved body that helps it fit more naturally around the wrist. Thankfully it has the same IP67 water-resistance certification as its activity-tracking compatriot, so you can dunk it in water up to 1 metres in depth and you don’t have to worry about taking it off before getting in the shower.

The watch strap is made from the same black plastic used on the Samsung’s Gear Live Android Wear smartwatch, so unfortunately adopts the same fiddly clasp mechanism to keep the watch secured around your wrist. You can actually remove the strap to replace it with a limited number of Samsung’s own optional straps, which does give you a small degree of customisation. 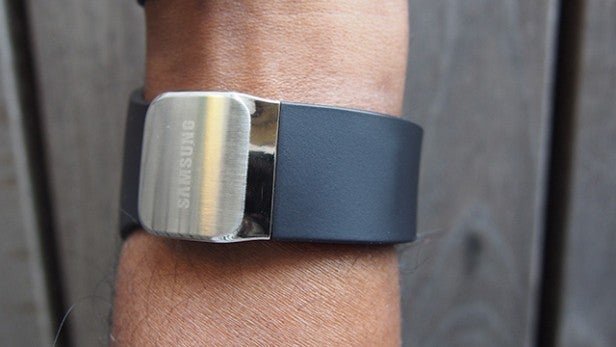 Breaking up that big, curved display is a single home button flanked by two of the many sensors packed into the Gear S. It’s around the back where things get interesting, though. Nestled alongside the five-pin charging point you’ll find the same heart-rate sensor found on previous Gear watches, plus a small speaker that enables you to make calls and listen to music.

The big new feature here is the nano-SIM compartment. It’s hidden behind a latch that’s tough to prise away, but it’s like that for a reason: to keep it firmly sealed so the internals remain safe when submerged in water or you sweat all over it. It’s not immediately apparent how to get it in place, but the SIM card slides into the back of the latch. 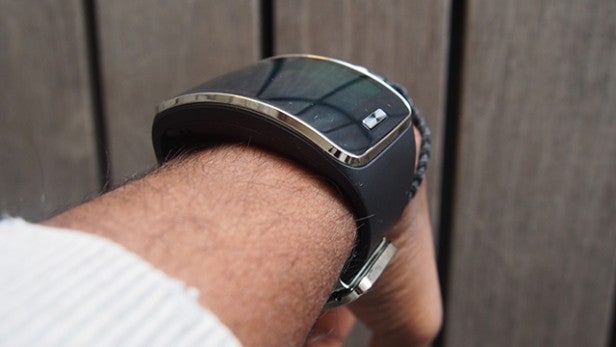 Aside from dominating the overall design, the Gear S’s display is the most impressive we’ve seen on a smartwatch. Essentially a supersized version of the curved Super AMOLED screen on the Gear Fit, it measures in at a massive 2 inches.

Thanks to a resolution of 360 x 480 and an impressive 300ppi pixel density, both text and images come out considerably sharper and more vibrant than on rival smartwatches. You simply don’t get those horrible scaling issues that Android Wear watches still struggle with.

It’s bright, too – something that Samsung’s AMOLED displays are well renowned for. Even at half brightness, it makes a strong showing and means the Gear Fit’s useful Outdoor mode isn’t necessary here.

The touch responsiveness is something of a mixed bag, though. Sometimes it works perfectly fine; other times it takes a couple of swipes to reveal the app drawer. It’s not frequent enough to make it unusable, but it’s enough to make it worth mentioning. 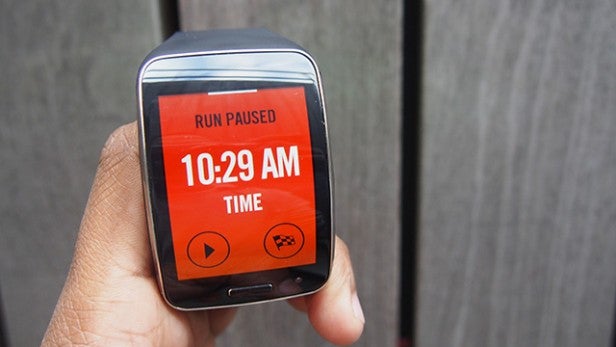 What’s powering the Gear S isn’t too different from what you can find on Android Wear watches. There’s a 1.2GHz dual-core Snapdragon 400 processor alongside 512MB RAM and 4GB of internal memory. Unlike on the Moto 360 or the LG Watch R, those components have to drive a more demanding operating system, and it shows.

There’s some noticeable lag when swiping through screens and launching applications, while the response rate is sluggish for native apps such as S Voice, which can take more than 30 seconds to deliver a response at times. We can’t, of course, run the same benchmark tests we use for smartphones or tablets, but what we can say is that we’re not overwhelmed with how things run.

If there’s one thing you can’t deny, it’s that the Gear S is packed with sensors. There’s seven in total. Most are geared towards tracking and feeding into Samsung’s highly prominent S Health platform. There’s an accelerometer, a gyroscope and a compass to help with navigation, an ambient light sensor that helps preserve battery life, while both barometers and UV sensor can gauge weather and climate conditions. 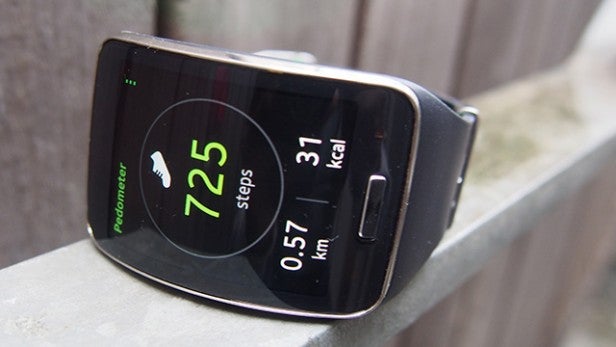 Like the most recent Gear smartwatches, there’s also a heart-rate sensor, although you can’t vocally command it to show your heart rate like you can on Android Wear watches. You need to swipe into the app to launch it.

Disappointingly, not a great deal has changed here in terms of accuracy – several readings in a row generated a difference of 10bpm. Compared to using a dedicated running watch like the Adidas MiCoach Fit Smart band, based on the Mio Alpha heart-rate sensor, or the TomTom Runner synced with a Polar H7 chest strap, the Gear S isn’t impressive enough in this department to sway serious athletes.

There’s a speaker as well, with the primary objective of making calls, but you can listen to music on it as well. While it offers
loud and muffle-free audio, the ability to pair a Bluetooth headset to the Gear S to listen to music out and about is the more desirable and less intrusive option.

What really sets the Gear S apart from the rest is the connectivity. You’ve got the standard Bluetooth 4.0 to connect to your phone and to Bluetooth headsets or headphones. Sadly the 4GB storage doesn’t allow for masses of music to listen to, but it’s not bad. There’s also Wi-Fi, giving you some functionality when it loses connection to a smartphone. 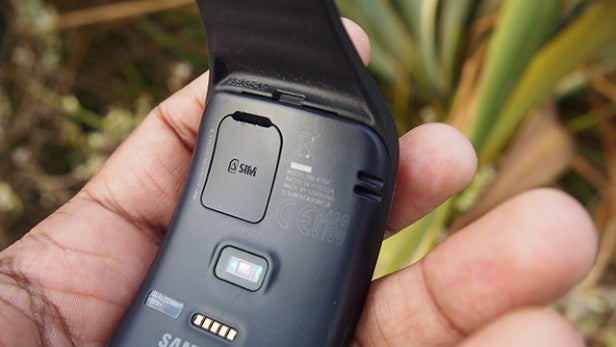 The big news, as mentioned earlier, is the nano-SIM card support. If you own a Galaxy S5, for example, you’ll have to ask your network provider to supply an additional nano-SIM and get a separate data plan. It only supports 3G, unfortunately, and O2 currently offers the Gear S on a £23-a-month contract, which gets you 100 minutes of talk time, 100 texts and 100MB of data. On top of a current phone contract, that’s a big investment for not that much.

We were fortunate enough to have a nano-SIM card separate from our main SIM, so we used to test it, and while it requires the same number to receive calls, you can still get the notifications pulled through and make calls from the Gear S.

Thrown into a scenario where our phone battery had run out, it was the perfect opportunity to make a call from the Gear S. Once away from people on the train platform, we were able to dial in a number on the sizeable screen and make a call.

There’s no getting away from the fact that talking into your wrist never feels less than ridiculous. Clarity was actually very good, if not up with the quality of a high-end handset’s speakerphone, but it was more than acceptable.

If you’re planning to use the Gear S to replace your smartphone altogether… Well, we wouldn’t.

Combining the SIM support with the built-in GPS receiver does mean you
can use the Samsung Gear S for navigation, as well as running other apps that require both GPS and a data signal.